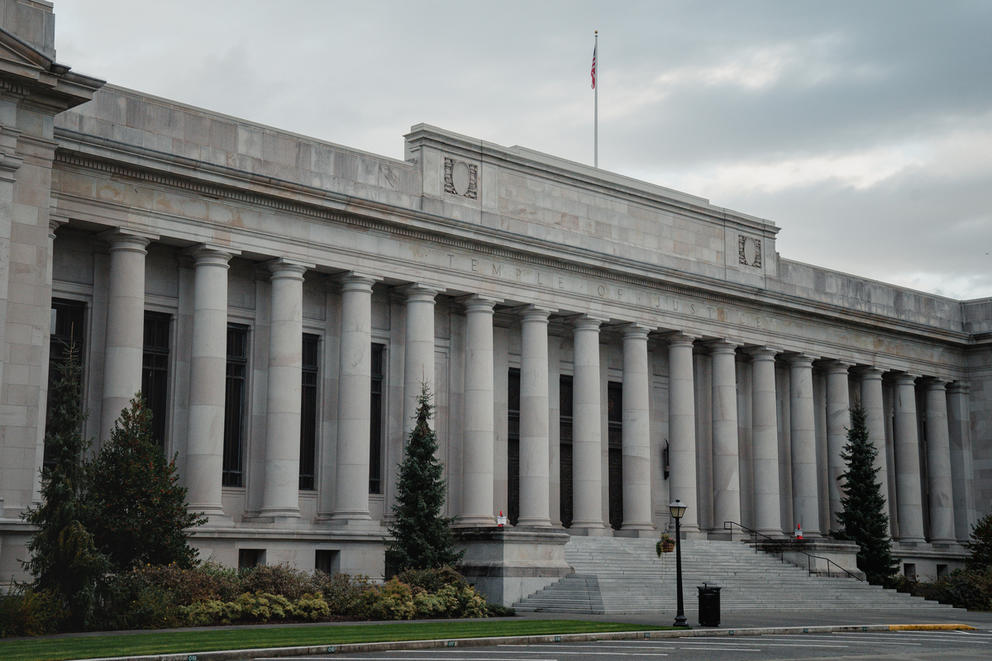 The Washington Supreme Court building, also known as the Temple of Justice, photographed on Oct. 21, 2020, in Olympia. (Jovelle Tamayo for Crosscut)

For the first time ever, Washington state’s bipartisan redistricting commission has failed to agree on new boundaries for the state’s legislative and congressional districts.

Now, it’s up to the state Supreme Court to draw new district maps — a decision that will shape state politics for the next decade.

Under state law, the four voting members of the commission had until the end of Monday to decide how to redraw the state’s 10 congressional districts and 49 legislative districts. At least three of the four commissioners needed to agree on a plan.

But in a statement issued late Tuesday morning — about 11 hours after its midnight deadline had passed — the commission acknowledged it had failed to adopt a redistricting plan in time, meaning the court will now determine Washington political maps for the next decade.

“The late release of the 2020 census data combined with technical challenges hampered the commission's work considerably,” the statement from the commission said.

Individual commissioners did not respond to messages Tuesday asking for more details.

The state Supreme Court has until April 30, 2022, to decide on a new redistricting plan. That has never happened under the state’s current redistricting system, which Washington voters approved in 1983.

Redistricting happens every 10 years, following the release of new population data from the U.S. census. The process at its core is about ensuring all political districts have equal population — but the redrawing of district lines also shapes which political party has the advantage in a given district, as well as whether certain communities’ votes get split and diluted.

One major point of discussion has been whether to create a legislative district in the Yakima Valley where most eligible voters are Latino. Matt Barreto, the faculty director of the UCLA Voting Rights Project, said last month that the state commission should create a district in Central Washington that is majority Latino by citizen voting age population, or else risk violating the federal Voting Rights Act.

In advance of Monday’s deadline, the two commissioners appointed by Democrats, April Sims and Brady Walkinshaw, said creating a district in the Yakima Valley that complies with the Voting Rights Act was a top priority for them.

The two Republican members of the commission, Joe Fain and Paul Graves, had focused more intently on increasing the number of politically competitive districts, meaning fewer safe seats for Democrats or Republicans. A legal analysis the GOP members commissioned also disputed that it would be necessary to create a Central Washington district where most eligible voters are Latino.

Other issues at play in the monthslong redistricting discussions included whether to group lower-income, racially diverse communities in south King County in the 9th Congressional District, while removing whiter and wealthier areas such as Mercer Island. Another issue was whether to place the Yakama Nation reservation in a single legislative district instead of two.

The breakdown in the redistricting process was unusual in that, when the commission adjourned just after midnight Monday, it appeared they had, in fact, reached a deal.

On Monday night, commission members had met for nearly five hours out of public view — reportedly in groups of two — emerging only occasionally to give vague progress reports. They then reconvened minutes before their midnight deadline and unanimously approved what Sarah Augustine, the commission’s nonvoting chair, called a “final congressional plan” and a “final legislative plan.”

It wasn't clear Tuesday what exactly those plans were, or what happened to them after the vote. A commission spokesperson, Jamie Nixon, did not immediately respond to Crosscut’s questions about what the commission had actually voted on.

The documents hadn’t been posted publicly as of Tuesday afternoon. Nor had the commissioners discussed or debated them in public before voting to send them to the Legislature for final approval. Brad Hendrickson, the secretary of the state Senate, wrote in an email Tuesday that he had received a signed cover letter and resolution from the commission indicating its members had reached an agreement, but no actual maps.

Michele Earl-Hubbard, vice president of the Washington Coalition for Open Government, wrote in an email that the way the commissioners emerged and immediately took action at the end of their meeting with no public discussion suggests they held an illegal meeting out of public view.

That could happen even if the four commissioners were meeting in groups of two, which theoretically wouldn’t be enough to create a quorum. Earl-Hubbard said a violation of the state’s Open Public Meetings Act can happen when information gets conveyed by intermediaries, even if the commissioners didn’t meet all together in secret.

She called it a “serial or daisy chain meeting.”

“They screwed up,” wrote Earl-Hubbard, an attorney who frequently works on public records cases.

“Plus, it showed the public they were being secretive and had something to hide. They should be open, even if they think they don’t need to be. Why do something this important by shutting the public out?”

The state’s Open Public Meetings Act requires deliberations and discussions — not just final actions — to occur in public. State law dictates that the Redistricting Commission must follow those rules.

Redistricting Justice for Washington, a coalition of groups representing communities of color, also expressed disappointment in how the commission went about its work. In a statement Tuesday, the coalition said the commission’s final meeting “lacked transparency and was full of confusion.”

Additionally, the Redistricting Justice for Washington coalition said it is prepared to take legal action, if necessary, to ensure the state’s new redistricting maps comply with the federal Voting Rights Act. In recent years, voting rights cases brought in the city of Yakima, as well as Yakima County, have led to changes in voting systems that aim to ensure Latino voters can elect their preferred candidates.

Tina Podlodowski, the chair of the state Democratic Party, said she thinks the state Supreme Court will draw fair maps, but probably not ones that will make Republicans happy.  She said she doesn’t think the draft maps initially proposed by the Republican commissioners would have stood up to a legal challenge under the Voting Rights Act.

Podlodowski said she feels comfortable about the court taking over, even if the commission’s failure to reach an agreement is somewhat disappointing.

“I think we have a court that has been infinitely fair in a variety of different decisions,” Podlodowski said. “I have full faith in them.” State Senate Majority Leader Andy Billig, D-Spokane, released a similar statement expressing his trust in the court.

Caleb Heimlich, the chair of the state Republican Party, didn’t immediately respond to an interview request Tuesday. A party spokesperson, Steve Johnson, said GOP officials "are waiting for the dust settle on everything" before commenting.

House Minority Leader J.T. Wilcox, R-Yelm, suggested on Twitter that the state Supreme Court might care less than the bipartisan commission about keeping sitting legislators in their districts.

While replying to a former state senator who suggested that the court may end up displacing more incumbents than the commission would have, Wilcox tweeted, “My thought exactly.”

That could produce “chaos in some ways,” Wilcox wrote.

Until the court finishes the redistricting plan, sitting legislators won’t know if they have to run for re-election in the same district or a new one. New candidates, meanwhile, won’t know the districts in which they are eligible to run.

That could prove tricky if the Supreme Court takes its time developing new district maps, as the court's April 30 deadline is only about three weeks before the deadline for candidates to decide whether or not to run for office.