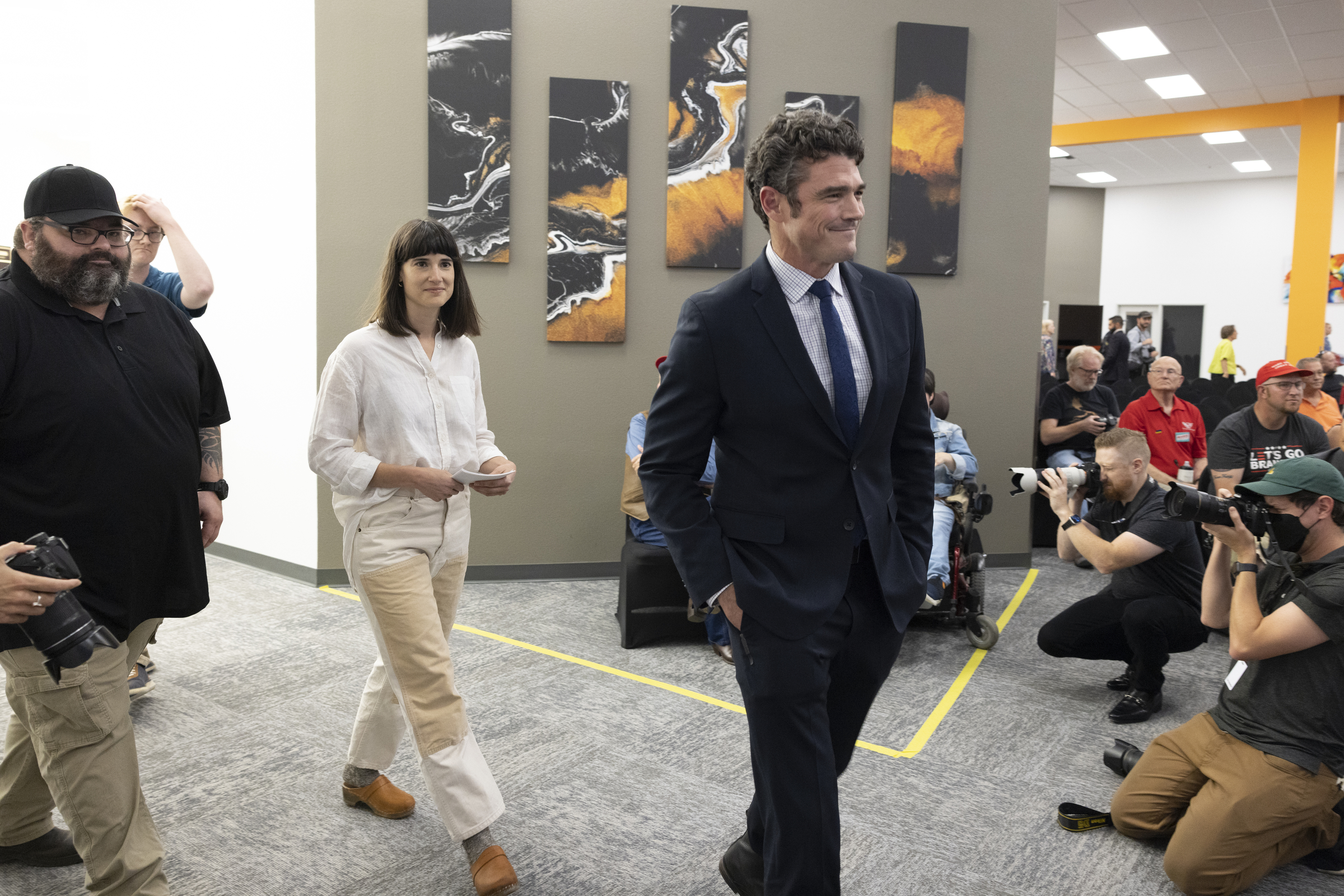 Washington’s 3rd Congressional district Democratic candidate Marie Gluesenkamp Perez and Republican candidate Joe Kent make their way to the stage in front of a full house at the RV Inn Style Resorts in Vancouver, Wash. on Tuesday, Sept. 27, 2022. Kent has raised over 10 times the amount that the Gluesenkamp Perez campaign has so far. (Kristina Barker for Crosscut)

Ferguson had come to Vancouver to campaign for Gluesenkamp Perez’s bid for U.S. Congress – and to give his own warning about Republican candidate Joe Kent.

Support from one of the state’s leading Democrats – elected statewide three times, Ferguson is considered a potential successor to Gov. Jay Inslee – gives Gluesenkamp Perez’s campaign a boost. But at the rally, Ferguson said out loud what others have been thinking: Where is the help from the national party for a candidate in a race that could change the balance of power in the other Washington?

In his speech, Ferguson noted Kent’s anti-abortion stance, but focused especially on the Republican’s support for former President Donald Trump and the unfounded claims of widespread election fraud.

“There is also a time where you draw a line in the sand, and you can't cross that,” Ferguson said. “And when it comes to the big lie, the stakes are absolute.”

Ferguson then invoked the acronym of the national party arm tasked with helping win races and keeping the Democratic majority: “If the DCCC is listening to me, send resources.”

But as the calendar scrolls toward Nov. 8, the Democratic Congressional Campaign Committee hasn’t sent money to boost the candidate, according to a Gluesenkamp Perez spokesperson. In a statement, a DCCC spokesperson wrote that the organization is “continuing to watch this seat closely.”

As of mid-July, Kent had raised nine times more money than Gluesenkamp Perez, according to campaign-disclosure figures, and he had $353,000 on hand still to spend. She had at that point $82,300 to spend. Since then her campaign has trumpeted  solid  fundraising in August and shared an internal poll showing a close race.

The national Democratic party’s absence has left Gluesenkamp Perez to simultaneously parent her infant child, run a small auto shop with her husband and try to blunt the advance of Kent, who Democrats in Washington and around the nation are calling “too extreme” and a threat to democracy.

An outspoken America First candidate, Kent has been dogged by media reports of affiliations and interactions with far-right street brawlers and white nationalists. He has promised to use congressional authority to investigate the 2020 election results amid Trump’s baseless contention that it was stolen, and to impeach Biden and several other members of the administration.

In an interview last week, Ferguson said he understood that national Democrats have tough choices in how to spread thin resources across the nation. But he noted the size and energy of that Vancouver campaign rally and Gluesenkamp Perez’s quality as a candidate. Abandoning the field, he said, would be “a mistake.”

“I'd encourage them to consider what folks on the ground here see,” Ferguson said. “And what I see is a race that's winnable.”

The nation’s 435 House of Representatives seats are up for election, and nearly all of them are safe bets for one of the major political parties. As Democrats fight to keep their slender U.S. House majority, the remaining few dozen races are ultra-competitive, with campaign budgets that can run into the multimillions.

Washington’s 3rd Congressional District election to succeed U.S. Rep. Jaime Herrera Beutler – a Republican who was sidelined in the August top-two primary after voting to impeach Trump – fits into neither category.

Now, two relatively young and unorthodox candidates are campaigning in a potentially competitive race – Trump won the district in 2020 by 4 percentage points – that is largely off the national radar. David Wasserman, House editor for the Cook Political Report, described the race as "on the periphery of competitiveness and outside of both parties’ spending sphere."

"And that is good news for Joe Kent, because he wants to simply ride the party label to victory," said Wasserman, who conducts nonpartisan election analysis.

On the national Republican radar

Absent barrages of TV ads, the campaign between Gluesenkamp Perez and Kent is playing across breweries, town halls and community events across southwest Washington.

Kent, however, has been featured on the National Republican Congressional Committee’s “Young Guns” list, which highlights GOP candidates running in open seats and urges donations.

The first-time candidate has vowed to impeach Biden and others in his administration, close America's southern border with Mexico – by sending the military if need be – and to sharply restrict immigration and tackle the drug-overdose crisis.

He also has a six-figure Twitter following and makes regular appearances on Fox News, which is generally the most-watched mainstream news organization in America.

Kent has continued to barnstorm across the district, which includes Clark County – the major population center and home to the city of Vancouver – along with Pacific, Wahkiakum, Skamania, Cowlitz and Lewis counties as well as a slice of Thurston County.

His campaign didn’t respond to a request for comment, but in an interview last month Kent discussed his efforts, including the need to unify Republicans after a long and bitter primary between several candidates on the right.

"So really I just think staying active on the campaign trail, town halls, I think that's how we won the primary, and that's how I think we're going to win in the general as well,” he said. “Basically no rest.”

Kent in that interview also dismissed contentions by Democrats that his questioning of the 2020 election results represents a danger to the republic.

"The fact that they have to go to this, like, high-level, 'you're a threat to democracy,' it just shows how weak their actual arguments are," he said.

Kent, who deployed 11 times overseas and later worked in intelligence, has said his experiences in America’s invasions – along with the death of his wife in Syria while fighting ISIS – created in him a distrust and skepticism of the government. The experience left him disillusioned with former President George W. Bush and he ultimately found a political home with the rise of Trump.

In 2020, Kent said he’d been campaigning for Trump and was under consideration for a job: "I did the interview process for a second admin, I was going to work in the National Security Council.”

But Kent has also sought to appeal to other disgruntled voters. Kent pointed to his opposition to foreign interventions – like helping Ukraine fend off the Russian invasion – and his support for using federal antitrust laws to break up the social media behemoths.

"Some people would say it's very right-wing to defer to the free market or be constantly involved in foreign intervention," he said.

The populist approach is a good message for the region, said state Rep. Jim Walsh, R-Aberdeen. Walsh’s 19th Legislative District overlaps with much of the congressional district: they share Pacific and Wahkiakum counties and parts of Lewis and Cowlitz counties. In 2016, Walsh became the district’s first Republican elected legislator in three decades – and conservatives have since come to win comfortably in legislative races there.

“What does Bernie Sanders have that people like?” Walsh said, citing Kent’s stated distaste of some major corporations, like defense contractors and social media companies. “It's not his socialist stuff, it's his populist stuff. He speaks to a frustration and a need that American people have.”

In Kent, Walsh described the kind of candidate skilled at winning over voters. “Firm handshake, good eye contact, he’s got that thing, that Clinton-like thing,” Walsh said, describing it as “lightning in a bottle.”

“And I think he's going to be a national figure pretty quickly when he gets in there,” Walsh added. “For better or worse.”

Gluesenkamp Perez owns a Portland auto-repair shop with her husband, and they live in rural Skamania County with their infant child. In 2016, she campaigned unsuccessfully for county commissioner, and caucused for Sen. Bernie Sanders that year for the Democratic presidential nomination, which she said she saw as a way to avoid a Bush-style Clinton dynasty. Gluesenkamp Perez is campaigning to boost trade and technical education, help small businesses and preserve legal abortion.

“My husband's working hard to keep things running smoothly at the shop,” Gluesenkamp Perez said in an interview last month. “I've got a 13-month-old at home, I’m still waking up at 4 a.m. every morning to feed him.”

“It’s brutal, taxing, and it's totally worth it,” she added. “Because democracy's on the line."

After her primary win, Gluesenkamp Perez’s campaign announced a surge in donations, netting more than $600,000 in August. A spokesperson wouldn’t say how much the candidate raised in September – updated campaign numbers should post later this month – but the campaign just increased its full-time staff by one, to five people.

And the campaign recently announced an advertisement “backed by a substantial six-figure buy” on cable and network TV. It focuses on her pro-abortion stances and Kent’s anti-abortion views in the wake of the U.S. Supreme Court’s rollback of protections.

For a Gluesenkamp Perez victory, the campaign would need to give moderate or soft Republicans a reason to break from Kent, said Wasserman of the Cook Political Report.

"And she would need likely several million dollars in advertising for the Portland [media] market, that would allow her to make that case by featuring moderate Republican voters who are crossing over from Herrera Beutler to vote for Perez," said Wasserman.

Still, "If Democratic donors put even half the money into this race that they've put into a completely unwinnable race against Marjorie Taylor Greene, then Marie Perez would be in a better place right now," he added.

Local Democrats have been working to fill the void. Gov. Jay Inslee sent out a fundraising pitch for Gluesenkamp Perez, according to a report in The Seattle Times, and a campaign spokesperson for the governor wrote that Inslee hopes to appear with the candidate.

Volunteers and Democratic staffers are using party offices in Vancouver and Longview for doorbelling and phone- and text-banking, according to Washington State Democratic Party Chair Tina Podlodowski. The effort in Vancouver dovetails with Democratic hopes of picking up legislative seats in the region, added Podlodowski, who has made at least one appearance in the congressional district to help Gluesenkamp Perez.

“For us, a lot of the work is turning out Democrats, turning out brand-new voters, voters moving in from another state, or voters who might not do as much midterm voting,” said Podlodowski.

While the DCCC watches the race, spokesperson Johanna Warshaw meanwhile pointed to Kent’s prior affiliations with far-right groups like the Proud Boys and interactions with white nationalists, saying “He is too dangerous to hold office, and voters will reject his full embrace of MAGA extremism in November.”

Like Ferguson, Podlodowski contends that democracy is at stake in the results. But she understood why the national campaign arm is looking at other races, Podlodowski said, and noted that the DCCC is spending to defend U.S. Rep. Kim Schrier’s seat in the 8th congressional district against Republican Matt Larkin, in Washington’s other competitive House race.

"It might be that we have to pull Marie over the line," Podlodowski said. "I suspect that if that's the case they will be there for her reelection in 2024."