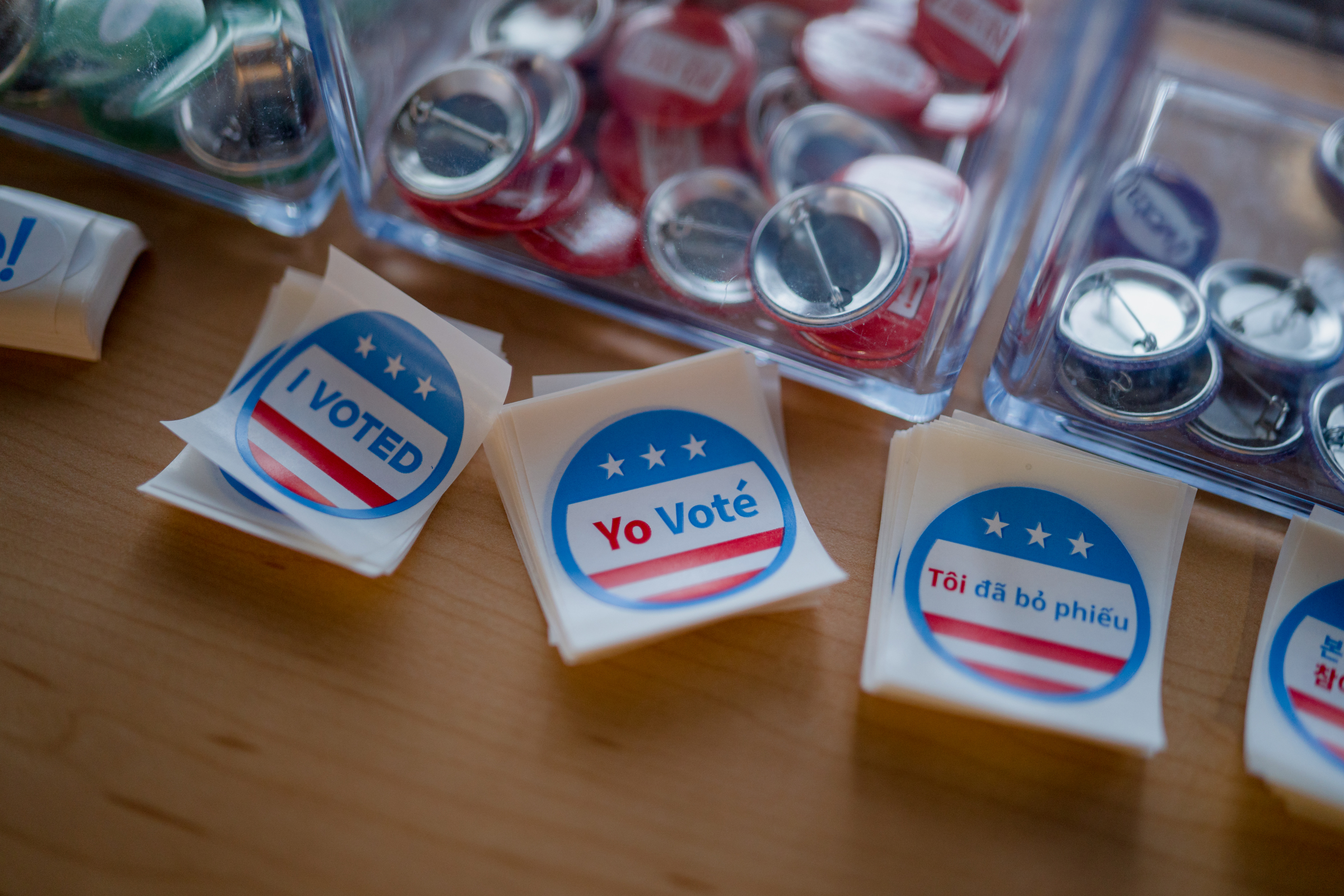 Welcome to the Crosscut Voter Guide for Washington state.

For more information, see the FAQ below.

We recommend checking out the secretary of state's website. It's the best place to see who is running in races in your city or county. You can also keep tabs on the progress of ballot initiatives.

Many Washington state races are nonpartisan. That means candidates are not required to run under any party label, though they may choose to promote themselves under one.

Washington voters can register up to the day of the election. You can register online or through the mail by July 25. Registration forms are available in many languages, from Amharic to Vietnamese. To register online, you need a current Washington state driver’s license or permit or a state identification card. If you do not have one of those cards, you can still register by mail or in person. The state will even help you find your county elections office, which is where you will likely need to go to register and vote in person before election day on August 2 (primary) or November 8 (general).

If you are registered to vote in Washington state and your address hasn’t changed, your ballot will be mailed to you about two weeks before the election. You can make sure your registration is up to date with your current address; check in here. If you did not receive a ballot, lost it or just made a mistake while filling it out, you can print a new one at your county elections office website. If you need a voter’s pamphlet, you can look at the guide at the same place where you check the status of your ballot.

Every county has drop boxes where you can turn in your ballot. The Office of the Secretary of State keeps this list of box locations. You can drop your ballot in one of these boxes until 8 p.m. on Election Day. Your ballot can also be mailed, without a stamp, and will be considered valid if it’s postmarked by Election Day.

Registered voters will receive their ballots around two weeks before election day. If you’re not sure if you’re registered, check in here.

If you are going to be in another state or another country when Washington ballots are mailed and you won't be returning until after the election, you have several options. If you are going to be staying with a friend or family member in another state, change your mailing address in VoteWA.gov to your temporary address. While you are away, you can also print a "replacement" ballot from the same website and mail it by following the directions on that document.

Lawmakers considered a bill earlier this year that would have allowed local municipalities to experiment with ranked-choice voting. Ranked-choice voting would allow voters to choose their top candidate and rank others in order of preference so that if their first choice loses, their vote would count to another person.

A bill that would allow local elections to opt into ranked-choice voting, and another that would rank votes for presidential primaries were introduced during the 2022 legislative session. Neither survived to a floor vote, and they will be re-introduced in the future.

In 2004, Washington changed its primary ballot system to advance the two people with the most votes into the general election, regardless of party affiliation, instead of having voters choose their top candidates on a primary ballot just for their chosen party. That can result — and often does — in two candidates from the same party competing in the November election.

Washington’s primary system was challenged in the courts and eventually received the blessing of the U.S. Supreme Court in 2008.

When Washington voters approved the top-two primary system, the Democratic, Republican and Libertarian parties all challenged the new law, saying the U.S. Constitution gives Americans the right to affiliate with a political party of their choice. The parties said the law violates their right to pick the candidates for office and that someone who calls themselves a Democrat, for example, but doesn’t fit their ideals, could earn a place in the general election and force the party to support that candidate. The Supreme Court justices disagreed and sided with the voters. They even ordered the parties to repay the state for court costs.

Writing for the 7-2 majority, Justice Clarence Thomas said that overturning Washington’s primary initiative would have been an “extraordinary and precipitous nullification of the will of the people.”

The top-two primary system is the reason why in Washington elections for partisan offices on the ballot say the candidate “prefers the Republican Party” instead of just “is” a Republican.

Seattle became the first U.S. city to approve "democracy vouchers" as a way of public financing of political campaigns in 2015. Supporters say the idea democratizes political campaigns by giving regular folks money to contribute as they choose, presumably taking some power away from rich people, companies and organizations that seem to dominate campaign finance.

You get a new batch of democracy vouchers for the upcoming primary and general elections (although not both). If you don't use yours in the primary election, you can still “spend” them during the general election. The city’s election site explains the process of giving unused vouchers to a new campaign.

You can access your vouchers online. First check your voter registration to make sure it is up to date. If it is, you have the option to access the democracy voucher system online and “spend” your vouchers through the site. If you can find the vouchers in your mail pile, you can still mail them in or hand them directly to a candidate or campaign staffer. (The city does check the vouchers when they’re submitted, so you won’t be able to spend your vouchers twice.) A voter can spend all four $25 vouchers on one candidate or donate them to multiple candidates they support.

Candidates eligible to receive vouchers are listed on the participating candidates' page. Candidates are allowed to ask for your vouchers in the same way they might solicit other kinds of campaign contributions, including at in-person town halls or when they knock on your door during campaigning.

Sometimes these offices are decided out of order, because someone has died or quit. But as state politics reporter Joe O'Sullivan recently reported, King County is considering moving most elections to even years because those races see higher turnout.

In our ongoing quest to get voters the information they need to mark their ballots, we asked candidates for Congress and the Washington Legislature to answer a short multiple-choice survey on today’s issues. For each topic – from abortion to the economy – we gave them five choices and asked them to mark which choice came closest to their beliefs.

Sounds simple, but it’s obviously not. We did our best to provide choices that cover most of the political spectrum, but we would have needed a lot more choices to include every unique perspective. Some candidates chose not to participate; others made a choice and then added context with a short description.

Let us know how you think this idea could be improved by emailing our news editor, Donna Blankinship, or by filling out the form on our full methodology page. We provide this voter guide for our readers and we want to hear from you.