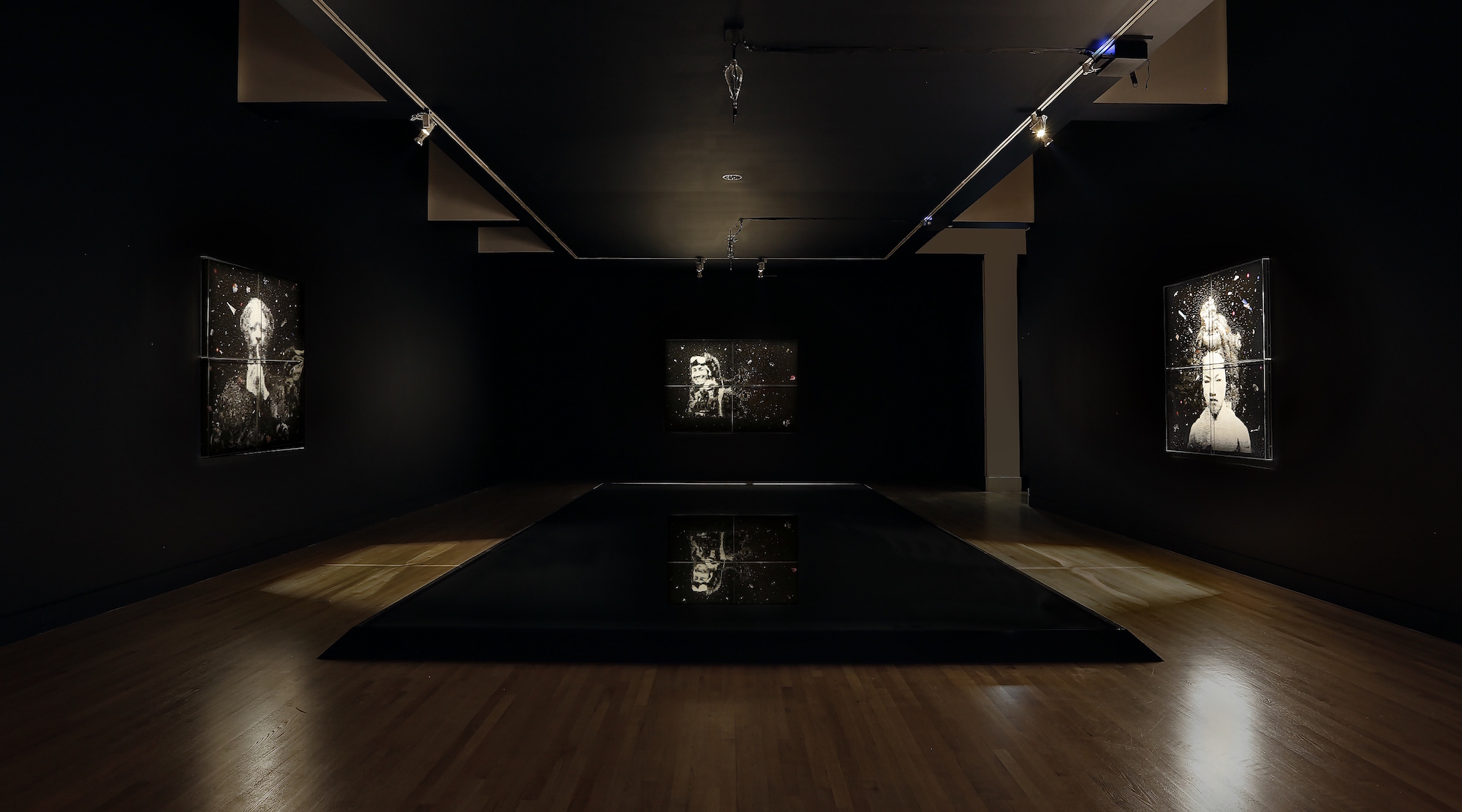 This heady eye-popper of a show at the Frye Art Museum finds a young Afro-Caribbean artist from the Bahamas venturing forward in every kind of globe-hopping, multicultural direction. The work is both mysterious and impeccably disciplined. The highlight is Strachan’s “Constellation” series, an installation of three luminescent panels in which he focuses on semi-obscure historical figures: Queen Min of Korea (1851-1895), American composer Butch Morris (1947-2013) and Tibetan sherpa Tenzing Norgay (1914-1986). All three are pictured against debris-filled night skies. (“Queen Min” has satellites, weapons, a space shuttle, a long-horned steer, a tiny muscle man and dozens of other objects floating chaotically around her). And they all face a reflecting pool that adds to the viewer’s sense of floating in outer space. Why stick with a single focus, Strachan seems to ask, when a whole cosmos is available?

I love old things, used things, and, above all, I love things with a story. This exhibit, known as the Langston Hughes Family Traveling Museum, is a celebration of poet Langston Hughes’ life, as told through artifacts that have been in the Hughes family for over 100 years. Head to the Central District to hear stories about the Hughes family from Langston’s cousin Marjol Rush-Collet. In the meantime, I recommend one of my favorite episodes of the show Radiolab, discussing “things” of all kinds — from pieces of the Wright brothers’ plane to an ancient seed jar found in the Southwest.

No digital fakery here. The vertigo-inducing shots that South Korean photographer Jun Ahn takes of herself perched on top of skyscrapers or hanging out apartment-building windows in Seoul, Hong Kong, New York and other locales are unadulterated products of rapid-fire photo sessions involving Ahn and her tripod-mounted camera. In some she appears to be about to take flight. In others, she teeters on a suicidal plunge. While they all pre-date our present political turmoil, they nevertheless seem custom-made for the Trump era. “Basically all of us are living on the edge of something,” Ahn remarked in a recent interview. Her explorations of a spatial disorientation and peril couldn’t be more visceral.

Now in its sixth year, this festival features films by — and about — Asian Americans, with a focus on Northwest filmmakers. SAAFF kicks off with the feature film “Signature Move,” the funny, coming-of-age tale of a Pakistani-Muslim woman. The film manages to combine a lesbian love story, Lucha Libre wrestling and familial and cultural pressures. This year’s festival consists of 74 films, many organized into themed shorts programs. I particularly recommend May May Tchao’s documentary “Spilled Water,” which tells the story of four women laboring in their own realms in China. For a fun (free) shorts program, check out “Blood, Guts, and Ghosts: Oh My!” on Saturday night.

The third CORRIDOR fest, set to take place at West Coast Printing (622 Rainier Ave. S) is billed as a festival of light, sound and movement. The Stranger wrote CORRIDOR, “proved to be one of the highlights of Seattle’s underground culture.” While, admittedly, many of the artists’ descriptions read as magnetic poetry to my above-ground self, the event sounds like a welcome breath of life in a month that’s felt very bleak and wintery. The sound will consist of experimental music from artists far and wide. The movement includes dance performances by Dead Thoroughbred and Matt Drews, and the light comes in the form of installation and visual art. Expect the unexpected.

Each year, Town Hall hosts the Urban Poverty Forum, taking on an issue surrounding urban poverty. The forums, with topics like debt and the criminal justice system, bring together tireless people from around the city to share their experiences and insight. And they don’t shy away from weighty, complicated conversations. This year’s forum will address police interactions in communities of color, and features creative performances by The Mahogany Project. On the panel: Reverend Harriett Walden of Mothers for Police Accountability, Educator and former candidate for State Superintendent Erin Jones, SPD Crime Prevention Coordinator Felicia Cross and Chester Earl of Justice For Jackie. The discussion will be moderated by Real Change staff reporter Lisa Edge.

Brittney Cooper comes to Seattle with her newly-released book “ELOQUENT RAGE: A Black Feminist Discovers Her Superpower.” By day, Cooper is an Associate Professor of Gender and Women’s Studies and Africana Studies at Rutgers University, as well as a writer for Cosmopolitan, The New York Times,, Salon, and others.  In “ELOQUENT RAGE” Cooper writes about her own experiences growing up in the South and adds a bit of cultural criticism on topics ranging from female friendship to Beyonce. Throughout, she talks about the enlivening power of anger — something society honors when shown by white people, but tamps down when expressed by Black people. An added bonus: her writing is both funny and compassionate.