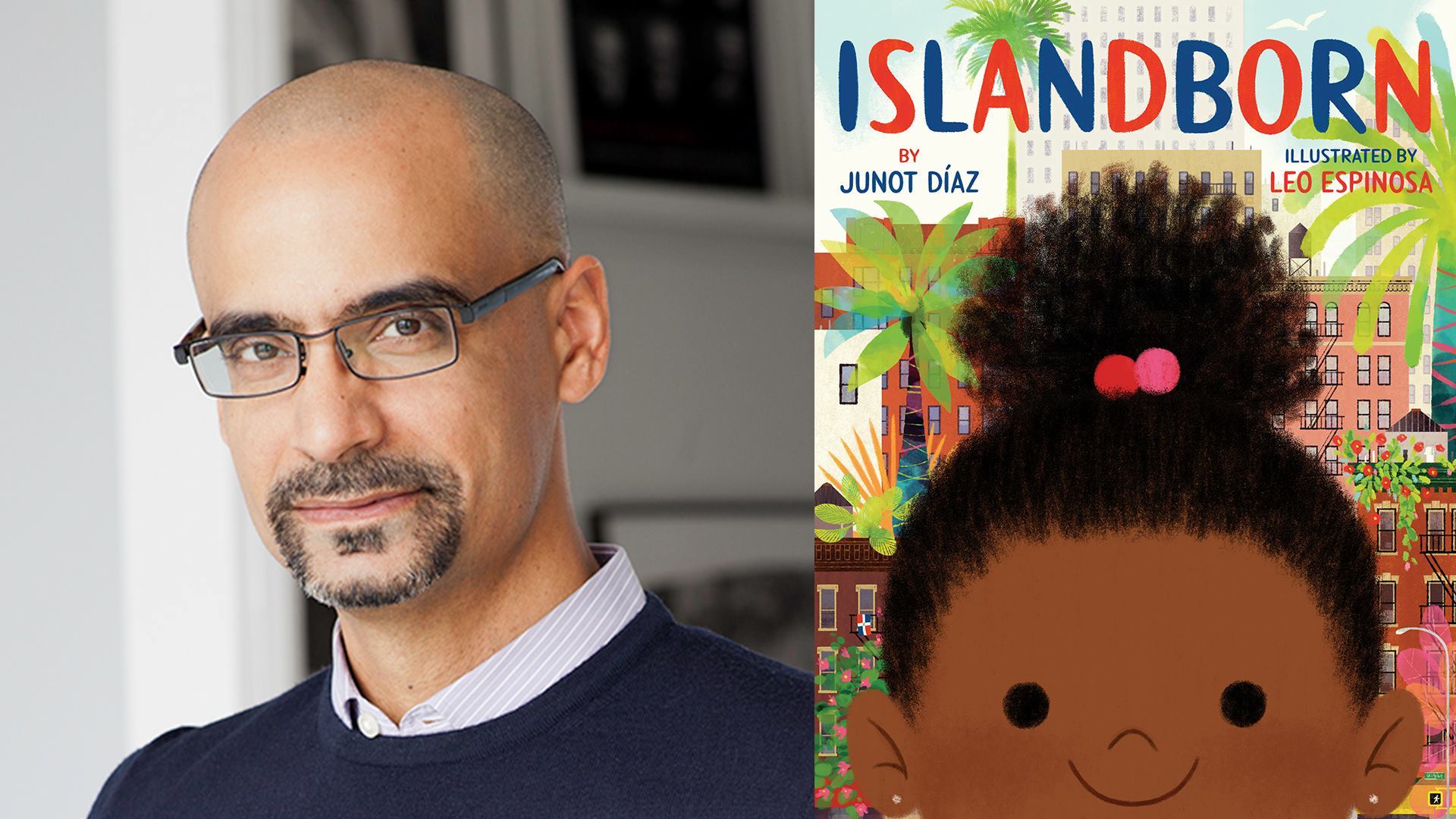 Junot Díaz and the cover of his new children's book “Islandborn” with illustrations by Leo Espinosa. (Courtesy of Third Place Books).

Moments that have nothing to do with the civil rights movement or slavery or being the “first” in something. Rather, writer Denene Millner pleads for stories about the “everyday beauty of being a little human being” — everday Black children anticipating the tooth fairy, riding a school bus, searching for the dragon in their bedroom closet. That’s the diversity of experience she says is missing from works catering to young readers.

The Pulitzer Prize-winning and MacArthur “genius” author Junot Díaz (“The Brief Wondrous Life of Oscar Wao,” “Drown,” “This is How You Lose Her”) now offers up his joyous and wondrous children’s book, “Islandborn.” In his first foray into kiddie lit, Díaz celebrates the immigrant experience through the eyes of 6-year-old Lola. She suddenly finds herself floored by an unnervingly emotional dilemma: her teacher Mrs. Obi has assigned her class to draw a picture of their home country. But the wide-eyed, partial-to-purple-leggings Lola cannot remember the place she left when she was an infant: the Island. (Yes, it’s Island with a capital I).

So Lola heeds the counsel of her teacher to interview neighborhood residents — a food vendor, a barber, her apartment building’s superintendent — about the Island. And their memories allow her to recreate a tableau of colorful cars, dancing people, humongous mangoes. “Even the people are like a rainbow — every shade ever made,” a woman tells her.

But asking grown-ups to remember the past, Lola comes to realize, can be painful. She eventually learns how long ago a monster forced some residents to flee their beautiful Island. (Díaz was born in the Dominican Republic where the dictator Rafael Trujillo ruled for 30 years until his assassination in 1961).

“Islandborn,” which is available in both English and in Spanish editions, salutes the resilience of immigrants who brave the unknown, the desire to hold onto one's culture and the force that is a child’s imagination. And for an author whose works continually center on the Latino experience and fully fleshes it out, “Islandborn,” illustrated by the Colombian-American Leo Espinosa, is unapologetically Black and Brown. Lola is darker-skinned than some of her Spanish-speaking neighbors and family members, making her an atypical pony-tailed protagonist no matter the genre of literature.

Junot Díaz will be reading from his book at 7 p.m. Thursday at Third Place Books in Lake Forest Park. He was interviewed by phone from Washington D.C. while on his book tour.

Was it always a given that the protagonist of the book would be a 6-year-old girl?

For me, it was. My goddaughters asked for a book about themselves when they were that age, so I wasn't gonna drop the ball on that.

And when they asked you to write them a book, did it make you realize what is or what is not available widely to children in terms of finding books with Black or Brown characters in them?

I mean, I experienced it and I certainly never wanted anyone else after me to experience it. So there's the agony of the persistence of a crime, that something hasn't been repaired. It certainly hurts you to know that the younger people, that the youth are going through things that you had hoped, by this time, would've been resolved. But ultimately, you've gotta recognize the problem and see if you can do anything about it. And this book was an attempt to do something about it.

I’ve never come across a children’s book that so fully embraces Latin American culture, that includes the words empanada or abuela in it. Can you talk more about representation and the acknowledgment of people of color, in particular Latinos, in your work?

It's one of the terrible deficits which we live with as people of color in this country, the lack of recognition. It's centering stories around their experiences.

When you were growing up, when did you first realize you weren’t seeing yourself represented in the media and or in literature?

I think as soon as I landed. I knew I was in trouble as soon as I got off the plane. I didn't understand the magnitude of the trouble. That took many years. But I knew something was really the matter. I knew we were in serious trouble. And just the fact that I went from a country where there was really only one primary color, Black and shades of it, and suddenly to be thrust into a country like the United States, which was such a disavowal of Blackness.

So is Lola Afro-Caribbean or Afro-Latina? How would you identify her?

Oh, I would say both.

That alone makes the book distinct — how it spotlights the Afro-Latino community, which is so often sidelined or entirely ignored.

I'm glad it [the book] is done, and I am certainly glad that I was able to portray this very particular community in which I grew up as faithfully as I could. And I have to tell you, I just feel very fortunate to have a collaborator like Leo Espinosa, to have this Colombian-Caribbean artist on this journey with me. It made me feel like I was on the right path. And he, in many ways, he confirmed my faith in this story, because of how much genius he added to it.

Seattle's Book-It Repertory Theatre will present an adaptation of Diaz's "The Brief Wondrous Life of Oscar Wao" April 19-May 6, 2018.