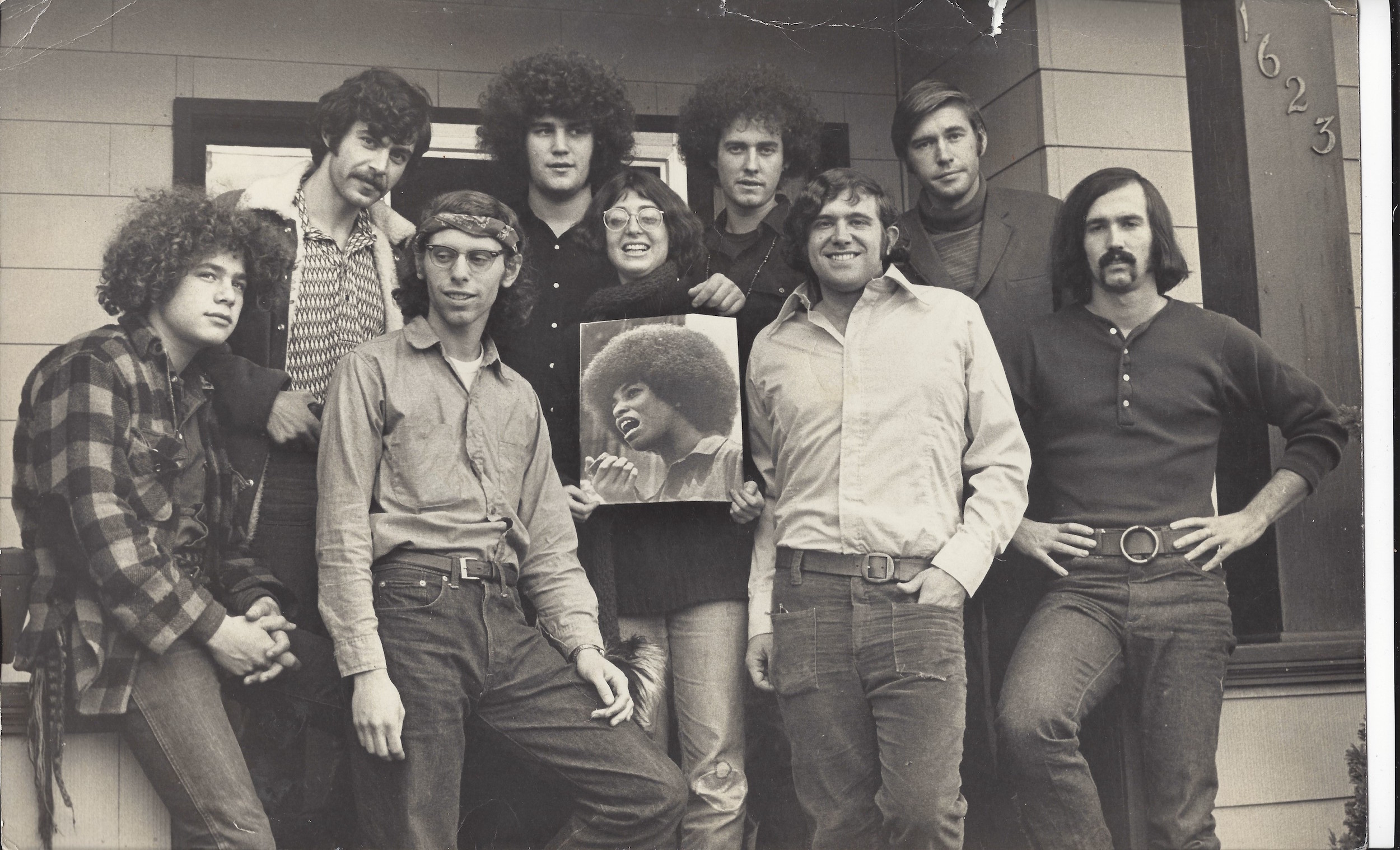 The Seattle Seven and two of their attorneys. (Photo courtesy of author Kit Bakke)

Just last week in Seattle, local teens were busy organizing a “March For Our Lives” sister march to call on politicians to change laws to improve school safety, stop mass shootings and end gun violence. The Seattle march brought out more than 50,000 people, and an estimated 800,000 protested in Washington, D.C.

Young people leading movements isn’t new. In fact, back in May of 1970, I arrived in Seattle to 6,000 students occupying I-5 in protest of the National Guard’s killing of four Kent State University students.

The Seattle organizers began a movement called the Seattle Liberation Front, and the most famous leaders behind it were the “Seattle Seven.” The group of collective households focused on everything from writing a statewide tax reform referendum to distributing doughnuts and coffee to people standing in line at the unemployment office to leading mass antiwar street demonstrations. At the time, I had relocated from Berkeley and I thought Seattle would be boring. I was wrong. And that was largely due to this movement.

Kit Bakke’s new book “Protest on Trial: The Seattle 7 Conspiracy” is a delightful portrait of Seattle’s radical history and the characters involved. It eloquently portrays that what worked in Seattle during the Nixon years — a similar reactionary period to today’s Trump administration — can work now. But only if you tap into the culture of those you want to organize, and for the “Seattle Seven” it was youth culture.

I sat down with Bakke to talk more about the “Seattle Seven,” the tactics they used and the lessons we should takeaway. This interview has been edited and condensed for clarity.

Q: Besides organizing demonstrations, what else did the Seattle Liberation Front do?

A: Well, they were very good at organizing protests. A month after arriving in Seattle they gathered a couple of thousand demonstrators at Seattle’s Federal Court House. They were protesting a Federal Judge’s decision to jail a nationally known group of leftist organizers called the Chicago 7 for criminal contempt related to their trial for conspiring with “intent to riot” during the 1968 Democratic Convention.   The same conspiracy charge was later brought against the Seattle Seven.

The energy generated by the Seattle Liberation Front (SLF) went far beyond protesting the Vietnam War. They helped in founding community-based service organizations like the Country Doctor Clinic, the Northwest Immigrant Rights Project and the Capitol Hill Food Co-op, all of which are still serving Seattle residents.

Q: Who were the Seattle Seven?

A: The Seattle Seven consisted of one woman, Susan Stern, who was the only one who had attended the University Washington and six males. Michael Lerner, an assistant professor in philosophy at the U.W. was the oldest, the other five were college graduates or dropouts: Jeff Dowd, Joe Kelly, Michael Abeles, Roger Lippman and Charles (Chip) Marshall III. All had been active in Students for a Democratic Society (SDS), which was the largest student political organization in the nation at that time. SDS advocated “participatory democracy” where citizens could actually take part in the political decision-making process.

In just a few weeks after arriving in Seattle they created the SLF. Its key unit of organizing was young people living in rented homes they called political collectives. Each one took on a community-organizing project.

Chip Marshall said they pushed lifestyle and music; everything focused on appealing to the masses and youths in particular, including black student groups. Basically, the SLF was a crowd-sourced revolution. FBI agents recognized SLF’s uniqueness, and noted in a concerned memo to their superiors that SLF had created a “strange new unity” unlike the disarray among activists in most other cities at the time.

Q: Why were Feds so eager to bring them to trial?

A: After organizing a demonstration that resulted in damage to Seattle’s Federal Court House and the arrest of a number of demonstrators, the federal government came after them. But there were similar demonstrations around the country, some bigger and even more violent.

I initially was interested in looking at “Seven” trial as a local history. However, I realized it was much more after I spent six years reviewing thousands of federal and court documents, FOIA files and diving into special collections in several academic libraries in addition to conducting dozens of personal interviews. SLF’s efforts definitely caught the eye of the FBI more than other student-based activist groups, partly for its successes, and partly for being far from the media and political power centers of the country.

It appears that the Nixon Administration’s Justice Department and the FBI chose to prosecute these Seattle activists to test a strategy to cripple local anti-war groups before they became too big. They believed that charging protest leaders with heavy-duty federal charges would greatly disrupt their ability to organize and likely cripple their organization beyond repair. They were partly right and partly wrong.

Q: Why is your book important today?

A: Currently, there is an overwhelming attack on our nation’s values of justice, equality and government accountability. I show, how the tactics that were employed by college age youths were able to meet that challenge in the early 70’s and how they can be applied today to counter the attacks upon our democracy right now. You must have a growing movement that reaches out to everyone: people of all colors, ages and occupations. The Seattle Seven and the movement they created, the Seattle Liberation Front, deployed multiple, layered tactics on many fronts.

Q: How did they do it and what were some of their tactics?

A: They generated a culture of protest and activism by engaging in community projects and having fun. They organized in taverns, they hosted lots of parties in homes, and popular music was always present. Consider how rap music in the play “Hamilton” has brought together a great diversity of Americans to enjoy its political message. Music and — culture in general — energizes a movement.

Nick Licata was a five-term Seattle City Council member and is author of “Becoming A Citizen Activist."