Dismissed by the city for years, some neighborhood business owners are skeptical there will be change 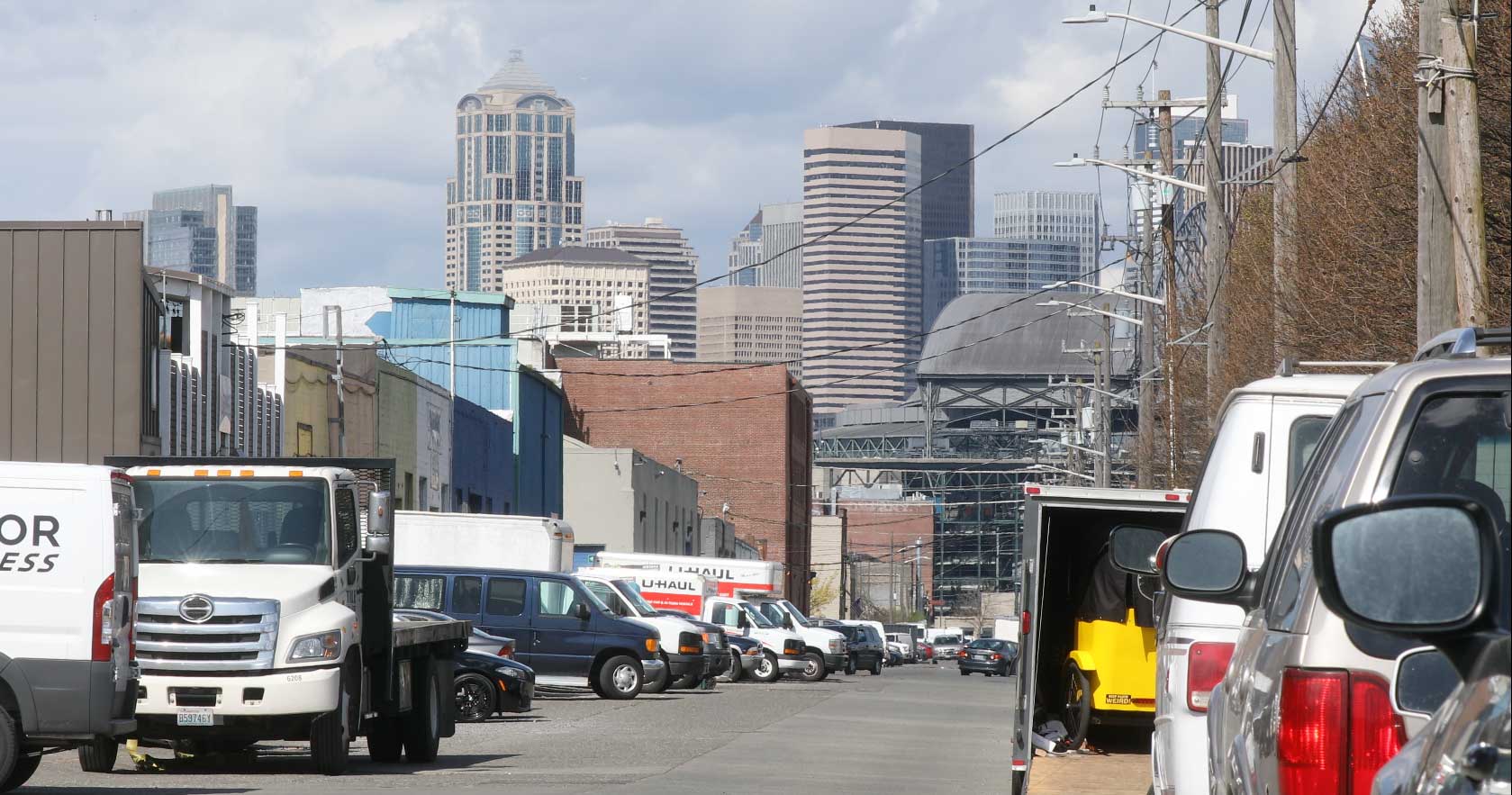 After years of mounting frustrations from SODO business owners over commuter parking around their building entrances and loading zones, city leaders now say they want to hear the concerns and pursue solutions.

Seattle city officials tell Crosscut they will hold a community meeting this month and also meet individually with SODO business owners as part of new efforts to fix the industrial district’s problems with limited parking and cumbersome access to businesses.

Those steps are among several included in an “outreach plan” the Seattle Department of Transportation developed at Mayor Jenny Durkan’s direction in the wake of a Crosscut investigation last month that detailed ongoing complaints from local business owners.

The city’s apparent change of heart — from apathy to active concern — has sparked initial optimism among the neighborhood’s business leaders.

“This is an issue that’s really widespread; that’s why I’m excited that we’re seeing some movement here,” said Erin Goodman, executive director for the SODO Business Improvement Area. “I’m pleased that the city is taking this seriously and making an effort to come and hear from the businesses that are impacted.”

SODO’s booming growth — which started in the early 2000s and then resumed at a furious pace after the Great Recession — has cramped the neighborhood. And proprietors there have become increasingly upset over what they describe as the city’s inconsistent enforcement of parking regulations — particularly as it relates to the use of public rights of way immediately adjacent to century-old buildings that abut Occidental and Utah avenues. Even as commuter parking has increased, some businesses say they and their customers have suffered some of the most aggressive enforcement.

Keeping the rights of way open for free parking attracts a daily flood of commuter cars that fight for open spaces and crowd the streets, including areas where business owners and customers step directly into the right of way as soon as they walk out the door. The parked cars often illegally block loading docks and other doorways, which several business owners said interferes with their daily operations and harms their bottom line. Some business owners reported being ticketed and threatened with city fines for trying to use the space in front of their loading docks or for trying to keep them accessible for routine deliveries.

But after feeling dismissed by City Hall for years, not everyone is hopeful things will improve.

Jodi Opitz, owner of Seattle Rehearsal and Sodo Pop, which abuts Occidental Avenue, said Seattle Department of Transportation (SDOT) staff have shown no real interest in solutions and are trying to respond now only after a push from Durkan. “These people aren’t interested in solving a problem,” she said. “Of course, now the boss has told them to, but prior to that, it was just a systemic failure that they weren’t interested in fixing.”

Opitz has been in dispute with SDOT for years over control of the right of way behind her music rehearsal business, which is often used by famous local and visiting musicians. She’s appealing a lawsuit brought by the city that seeks to collect on a $500-a-day fine that was imposed on her three years ago, after she wouldn’t take down city-prohibited “no parking” and towing signs to ward off commuters. The total the city says she owes now exceeds $558,000 dollars.

[SDOT staff] aren’t that interested in solving a problem. Of course, now the boss has told them to, but prior to that, it was just a systemic failure that they weren’t interested in fixing.”
— Jodi Opitz, owner of Seattle Rehearsal and Sodo Pop

The neighborhood meeting SDOT has proposed for April has not yet been scheduled. Goodman said part of the discussion in holding it is whether it should be “open to the public or invite-only for those who are impacted” directly by the neighborhood’s access issues.

Copies of SDOT’s outreach plan state city staff will also “invite individual businesses to get in touch directly with SDOT and share their particular issues and challenges with parking, loading and access.” The plan continues: “SDOT will then meet individually on site at their location with any business that responds, to see first-hand any challenges described and to collaborate on potential solutions.”

It’s a stark contrast from the tone the city took just one month ago. SDOT’s parking program manager Mike Estey had originally told Crosscut he was “not aware of a lot of consternation out there” and that the city had “had a lot of success, meeting the needs of property owners and installing signs” that designate acceptable parking areas versus protected loading zones.

Neither SDOT nor the Mayor’s Office would make an official available for an interview for this story. City Councilmember Bruce Harrell, whose district includes SODO and who is also the council president, did not return a call seeking comment.

SDOT said in a recent statement to Crosscut: “We recognize the challenging circumstances facing the SODO neighborhood: Over the past several years, growth and redevelopment have put tremendous pressure on local streets and have resulted in many different people and uses competing for harder-to-come-by public parking.”

In both that statement and in its subsequent outreach plan, SDOT emphasized it had already worked for months on ways to ease the parking situation on First Avenue South, a north-south thoroughfare through SODO. The plan states the agency’s next efforts “will build upon [that] successful outreach.” Neighborhood stakeholders, however, said First Avenue was never the pressing problem the industrial district needed SDOT to address. The issues of overcrowded parking and right-of-way access along the side streets of Occidental and Utah were more immediate but ignored, they said.

Goodman said she has spoken several times with SDOT officials since Crosscut’s first story ran about possible new efforts to work on SODO’s access issues, but she hadn’t been given anything in writing about the city’s intentions. Crosscut shared the outreach plan with her to get her feedback and she said she liked “pretty much all of it.”

Among the specific solutions SDOT said it now “can do” for the neighborhood are to:

Some neighborhood stakeholders, however, said such fixes either have already been utilized or were already the topic of discussions. But there are also new elements in the plan that business owners say the city either hadn’t been open to before or hadn’t yet presented as options.

A copy of the outreach plan provided to Crosscut by Durkan’s office went into greater detail about SDOT’s intended efforts than the document provided first by SDOT itself. (The reason for the added information wasn’t clear.)

For instance, the mayor’s copy lists among “the other things SDOT can do” is to install musician loading zones specifically “adjacent to Showbox SODO, Sodo Pop, other venues” — a carve-out exemption used at musical venues elsewhere in the city to guarantee access.

However, Opitz — who owns Sodo Pop — dismissed the proposal as “old ground” previously discussed with the city that, she says, wouldn’t resolve the problem of subjective enforcement. And, she said, “it doesn’t help the other 45 businesses get access to their loading dock doors.”

Opitz, working through representatives, has sought a meeting with Durkan’s top aides in recent weeks but she said she hasn’t gotten a response.

She said she wants to propose to Durkan and the City Council a “business access exemption” for the specific provision in city code that prohibits blocking or parking in front of — and within 5 feet of — alleys and driveways, such as loading dock areas. She also suggests giving businesses, not police, the ability to enforce that exemption, citing what was historical practice in the neighborhood before the city stepped up efforts to exert its authority over SODO’s public rights of way about 12 years ago. City Council would have to approve such a new law.

Meanwhile, Goodman — whose organization collectively represents the neighborhood’s businesses — was more open to compromise and found a number of SDOT’s proposed ideas appealing.

One proposal would constrain short-term free parking to 1-, 2-, and 4-hour limits to thwart commuters who take advantage of SODO’s free parking all day long. Another idea would limit parking for car-sharing services, like ReachNow and car2go. Goodman said employees in the neighborhood occasionally use the services when they have to run out to meetings during the day so that they don’t have to give up a personal parking space — a trend that runs counter to efforts to decrease congestion.

Goodman was pleased the outreach plan included various potential solutions. “To me, it says they’ve heard a lot of the things I’m saying … that I’ve been pushing them on,” she said. “They’re paying attention. Do I think they’ll be able to do all of these things? No, but it’s good to see they’re considering them.”