Durkan cleans up the toxic mess Murray left behind 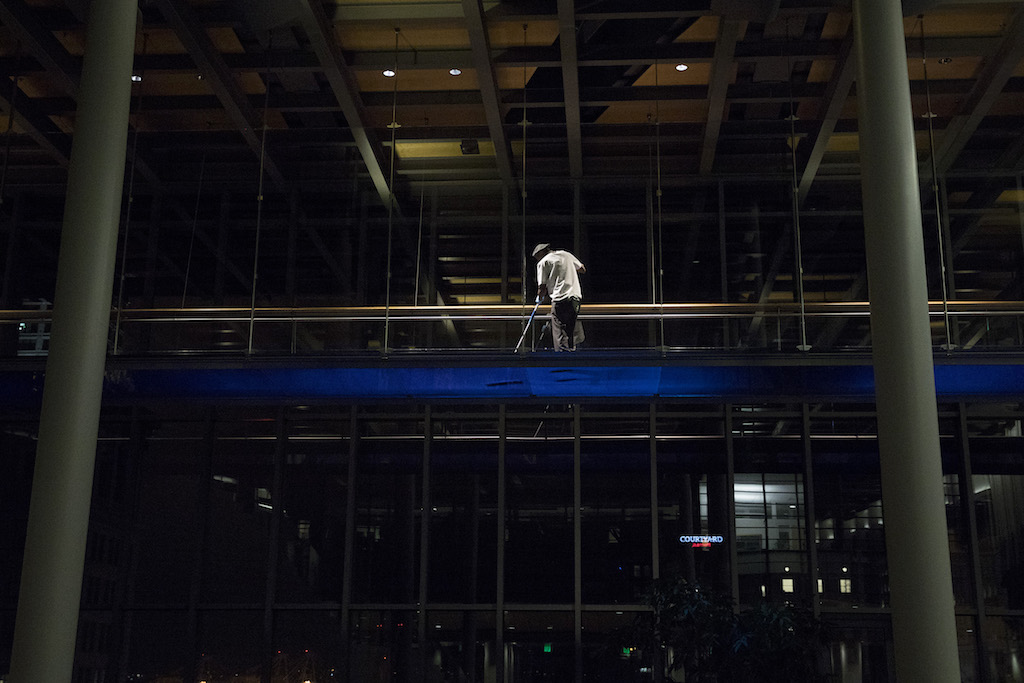 A night janitor works on a 2nd-floor bridge inside Seattle City Hall.(Photo by Matt M. McKnight/Crosscut)

As Mayor Jenny Durkan’s administration settles in, Seattle is witnessing the unfolding of an overlooked reality: Sometimes things in politics are worse than we want to believe. Durkan has a lot of toxic waste to clean up in the wake of former Mayor Ed Murray’s three-plus years.

After Murray finally resigned in the face of The Seattle Times’ mounting documentation of sexual abuse allegations against him, we have heard an increasing litany of complaints about abusive treatment of women within city offices, poor follow-up on complaints about gender and race discrimination, and even a “toxic” culture within the expanded Human Resources Department. And that expansion had been a Murray initiative, overseen by a political ally.

On Monday, the city personnel problems even managed to pop up, almost randomly, in a national report by BuzzFeed News documenting harassment problems at the liberal Center for American Progress. As an example of the Center management’s questionable handling of perceived harassment, the story focused on complaints there about Benton Strong — a Murray hire as spokesperson at $135,000 per year in 2016. Although Strong was an oddly abrasive communications director for Murray (once texting to Crosscut’s David Kroman “Fuck your photographer”), he apparently didn’t have similar issues here. After Seattle officials belatedly learned of the issues at the Center, Benton was eventually provided a city-reimbursed, $280 per hour workplace “coach.”

The number of personnel problems dating from the Murray administration again raises questions about whether we should have had faith in Murray in the first place. Most of us would start sweating at the thought of working for a temperamental, sometimes vindictive boss — but a majority of us voted to put Murray in charge of 11,000-plus city employees and budgets of $6 billion a year. So now we are surprised that there’s a mess for Durkan to clean up?

When Murray took office, most people in political circles and the media were aware of his bad temper, including a caught-in-public-records spat over a parking fine at the University of Washington. But he was smart and, as a longtime state legislator, he had led the fight for equal marriage in the Legislature. Murray was, as a Seattle Times story put it during his 2013 mayoral campaign, “a coalition builder — a liberal Democrat who has worked across partisan and ideological lines to craft budgets and major transportation packages.” Although it was always hard to document at the time, there was plenty of off-the-record talk that some of that coalition building came from people being afraid to cross him.

After Murray won election in 2013, media folks covering City Hall realized that working in the Mayor’s Office was a pretty miserable experience. That’s a difficult story to get hold of but Crosscut’s Kroman managed to bring it up forcefully in 2015 (drawing a rare personal phone call from the mayor and infuriating a top aide) when he pulled together years of city records to show that there was much more turnover in the Mayor’s Office than under most other recent mayors. The Stranger’s headline on a news roundup that morning archly asked, “Does Mayor Ed Murray Have a Personnel Problem?”

Uh, yes, he certainly did. And now Durkan is dealing with them, probably more forcefully than would have been expected. She, after all, had long been a political ally of Murray’s, even welcoming his endorsement at one point after some of the early reports of abuse allegations.

Durkan and her team seem to be avoiding any inclination — quite natural to most politicians — to complain about the hand they were dealt and pat themselves on the back for facing up to neglected problems.

In a lot of ways, Durkan herself wouldn’t seem to be the obvious choice to bring about better personnel management. The former U.S. Attorney for Western Washington has generally come across as a strong, no-nonsense leader — maybe not the person you’d count on to be a sympathetic listener to complaints. As Times’ City Hall reporter Daniel Beekman noted, she has recently referred to herself as “the impatient mayor.”

But what Kroman’s stories on discrimination concerns and the HR Department have also suggested is that she has a grasp of how to lead, including the value of listening. As she came into office somewhat hurriedly — because of Murray’s resignation, she took office in late November rather than Jan. 1 — she still took time to visit departments to hear employees’ ideas and concerns. She also sent out a citywide email blast looking for employees’ feedback, which drew a good number of HR, harassment and bias concerns. The head of the HR Department, a longtime friend of Durkan’s, resigned shortly after the election (with a Durkan statement praising her service).

Part of the reason that voters picked Murray in 2013 was the belief that he would get things done, whatever his rough edges. And his first year in the Mayor’s Office generally won praise for, among other things, passing the $15 per hour minimum wage and tackling police reform. He might well have won re-election last year, were it not for The Times’ reporting of the sexual abuse allegations against him.

We are still learning what problems may have built up as he practiced his arbitrary style of mismanagement and — if you believe his sex-abuse accusers; Murray has always denied the allegations — exercised his ability to deceive others and maybe himself. Durkan is picking up the pieces, but doing so with a better fundamental grasp of how to lead.

From the outside looking in, it appears that Durkan may have a good sense of how to treat people and how to exercise judgment as a manager, even when some of those involved are, like the departed HR director, her friends.

It’s hard to know, however, whether things are just what they seem. Or better. Or worse —that’s a fact hovering over Seattle in Murray’s wake and one more thing that Durkan and all of us in the city must deal with.