Number of homeless living in vehicles could fill McCaw Hall 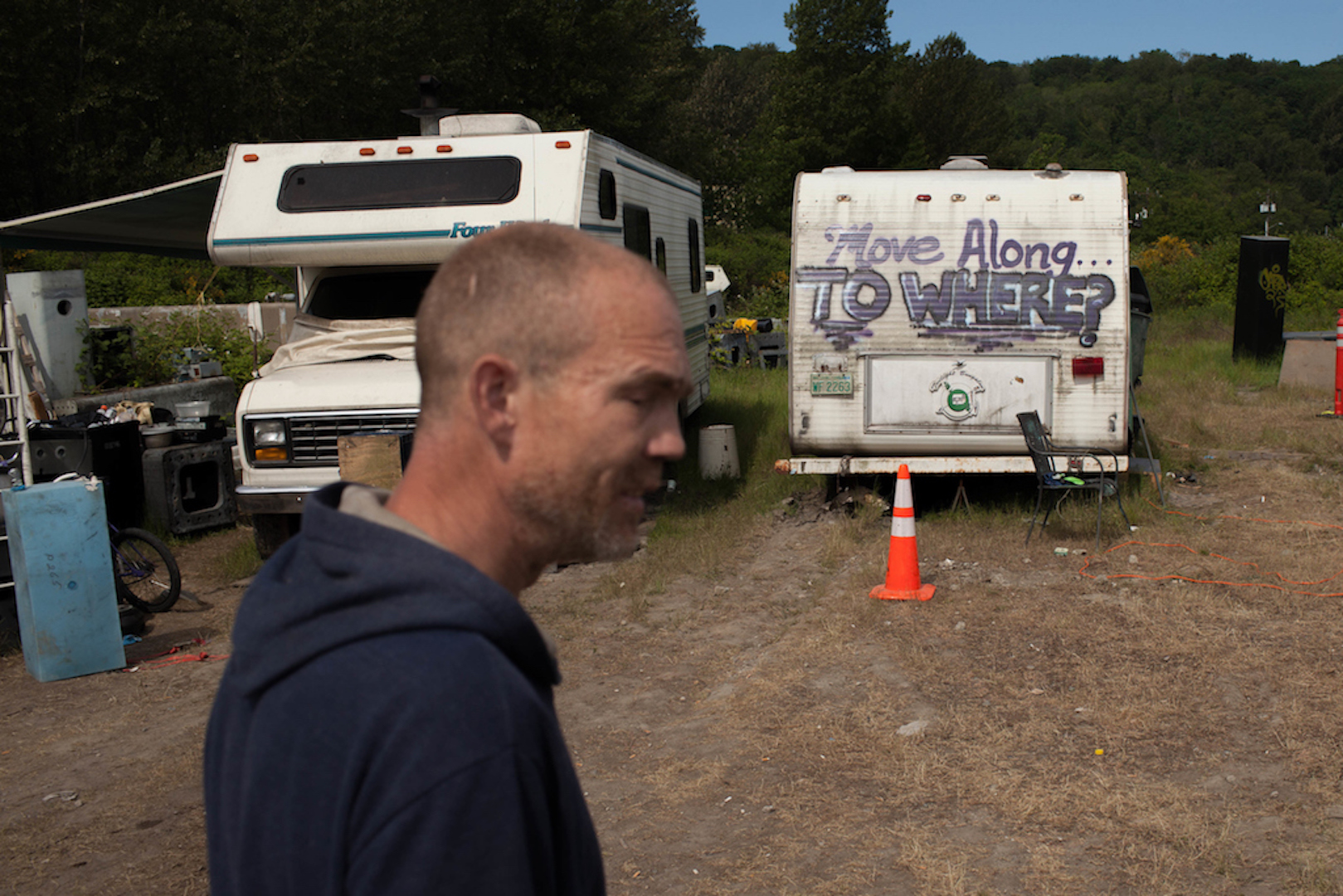 FILE: A man at a homeless encampment in Seattle. (Photo by Matt M. McKnight/Crosscut)

The number of people struggling with homelessness in King County has increased, again. It’s a pattern that’s continued since 2012, spurring the declaration of a State of Emergency in 2015 that’s in place today.

There may be some comfort in the fact that this year’s increase was smaller than in past years. The new numbers, collected from a volunteer-driven count on Jan. 26, as well as subsequent surveys of shelters and youth and young adults, show a 4 percent increase, from 11,643 last year, to 12,112 people in shelters or on the streets this year.

The methodology for the count changed last year, so comparing numbers pre-2017 is difficult. But a 4 percent jump is less than the double digit increases of years’ past.

The count also shows a slight decrease in homelessness among families with children. Veteran homelessness is down by a solid 31 percent.

Still, no one was celebrating. "These numbers are always sobering," said Kyra Zylstra, director of King County's All Home.

The proportion of people living on the streets relative to those in shelters increased from last year: For the first time, those living outside outnumbered those inside.

That spike is largely driven by people living in cars and RVs — up 46 percent from last year to 3,372. That's enough to fill McCaw Hall in Seattle, home of Seattle Opera and the Pacific Northwest Ballet, and leave 400 people waiting outside. Seattle and King County have struggled to create a comprehensive approach to people in vehicles. A parking lot, outfitted with water and electricity, was closed due to exorbitant costs. A proposal from Seattle Councilmember Mike O’Brien to offer more leniency on parking fines and to do more outreach to people in vehicles has languished.

The survey also shows a 28 percent jump in the number of people considered “chronically homeless” — defined by the U.S. Department of Housing and Urban Development as people with a disabling condition — mental issues, chronic health problems, drug dependency or other barriers to holding down a job — who’ve been homeless for a year or more or have had four or more incidents of homelessness.

This year’s survey confirms what the City of Seattle already concluded last year: Most of the homeless population lost its stable housing while living in Seattle. That’s not to say everyone is from the region originally, but it challenges the pervasive belief that people are moving to Seattle and King County specifically for homeless services.

Respondents reported losing a job to be the No. 1 reason for falling into homelessness. That’s followed by alcohol and drug use, evictions and mental illness.

As has been long the case, significant disparities still exist between races, with Black, Latino and multi-racial people making up a disproportionate number of those struggling with homelessness. LGBTQ youth and young adults are also overrepresented. The number of Native people experiencing homelessness declined from last year, from 6 percent of the total to 3 percent. Nevertheless, that number is high compared to the countywide population of just 1 percent.

The numbers released Thursday reflect the number of people struggling with homelessness on a given night. But the actual population is more fluid. Zylstra said Thursday they estimate about 30,000 people were homeless at some point over 2017. Compared to 2013, said Zylstra, service providers moved twice the number of people into housing. According to the Seattle Human Services Department, Seattle has housed 3,030 people in the first quarter, either by providing housing or preventing them from become homeless.

But the need is growing faster.

The numbers land as the city hits a fever pitch over the best ways to address homelessness. The Seattle City Council recently approved a $275 per employee per year tax on businesses with revenues over $20 million. But some members of the council and Mayor Jenny Durkan disagree over the balance of building more affordable housing and increasing shelter capacity.