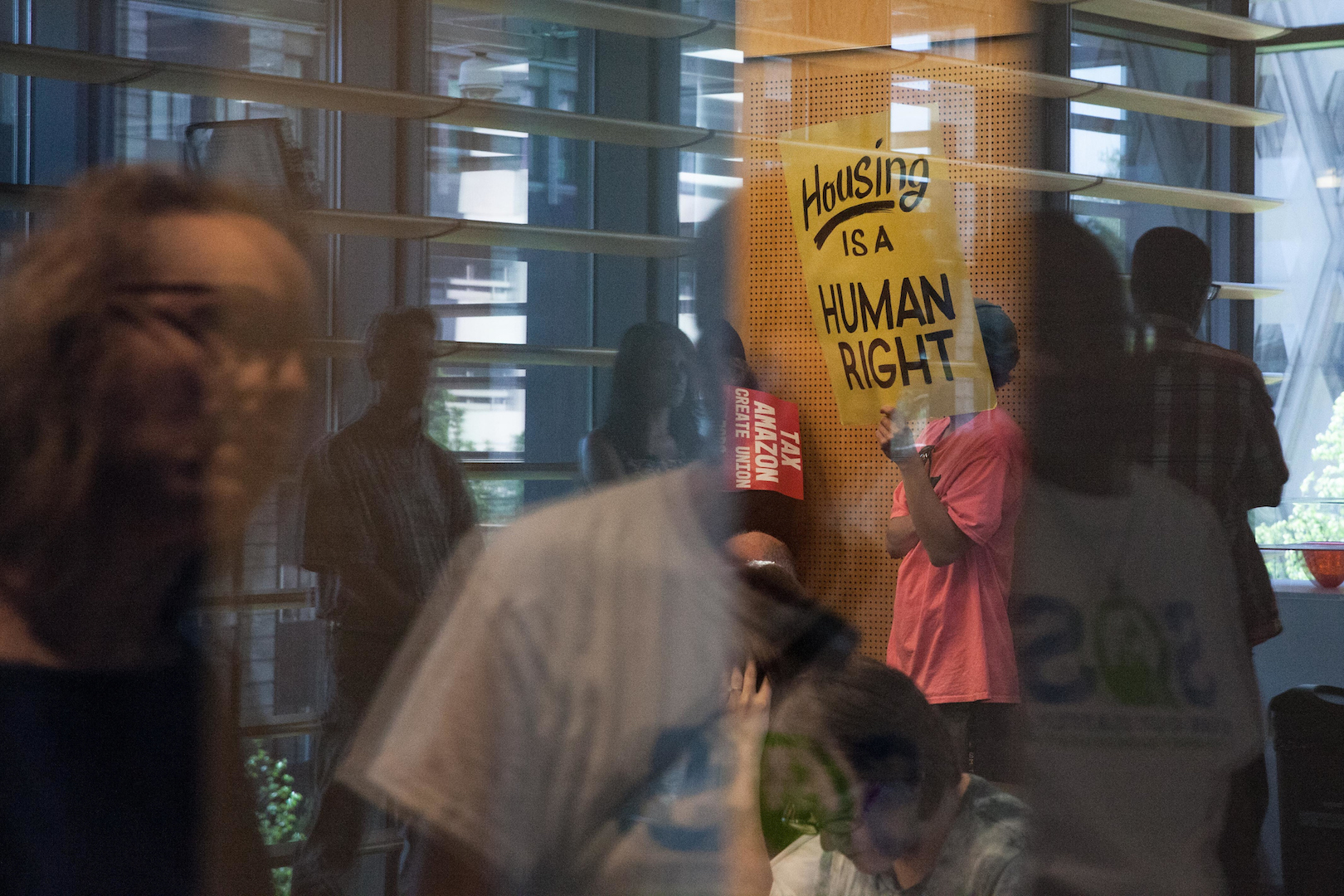 A housing advocate is seen holding a sign through the exterior glass windows outside city council chambers, during discussion about the employee head tax at City Hall in Seattle on May 14. (Photo by Matt M. McKnight/Crosscut)

Local businesses and economic development groups have secured more than $300,000 in commitments to place a referendum on the ballot next fall that would repeal the Seattle City Council’s newly passed business tax, according to two people involved in the effort.

The commitments came together remarkably quickly. A group of small and large businesses, as well as representatives from the Seattle Metropolitan Chamber of Commerce and the Downtown Seattle Association (DSA), met Thursday at 9:30 a.m. and pledged to raise money, sources said. The commitments were mined from the networks of the individuals and business interests present in the room.

The group will shortly launch a website, which one person suggested would speed up contributions even more. The group is calling itself the No Tax on Jobs coalition, according to its election filing.

It’s unclear exactly how much money has been secured so far. But the group set a goal of $300,000, which was quickly met and exceeded, according to two sources who were at the Thursday meeting.

The City Council passed the tax Monday. It will raise between $45 million and $50 million every year for housing construction and homelessness services. Companies with $20 million in revenue or more will pay $275 per employee, per year. The tax is estimated to impact some 600 local businesses.

Saul Spady, the president of Cre8ive Empowerment and whose grandfather founded Dick’s Drive-in, told Crosscut he simply does not believe the city will spend the tax wisely and that the number will slow business growth. Spady is listed as the campaign's secretary on the referendum's filing, but did not confirm the level of commitment secured. However, he was pleased to hear it. “The reason we’re starting with a referendum is because we don’t have time to let the council shut down growth like this,” he said Friday afternoon.

The bulk of the money raised will go toward hiring paid signature gatherers.

Spurred from a desperate need to reduce the number of homeless people — nearly 12,000 in King County — the employee tax quickly ballooned into one of the most divisive issues in recent Seattle history. At one point, Amazon threatened to halt construction on one new building downtown and sublease another.

After weeks of back and forth, the council and Mayor Jenny Durkan agreed on what they billed as a smaller compromise proposal that appeased Amazon, if only slightly. But many in the business world were not satisfied.

“This was billed as a grand compromise, but it’s not a compromise if there are only 10 people in the room,” said Spady.

But for proponents, it was a necessary step to address the chronically lacking affordable housing stock.

Speaking Friday, Councilmember Teresa Mosqueda, one of the sponsors of the tax said, “This was never intended to be an us versus them proposal. This was a compromise that exempted small businesses, asked for 14 cents an hour to help with the biggest humanitarian crisis we’ve ever seen on the streets…. It’s good for the health of our community when we don’t have folks living outside.”

In a recent KIRO/Strategies 360 poll, 58 percent of respondents opposed a similarly sized tax.

Mason Bryan contributed to this story.

This story has been updated to clarify the role Ceis Bayne East Strategic has in the campaign.