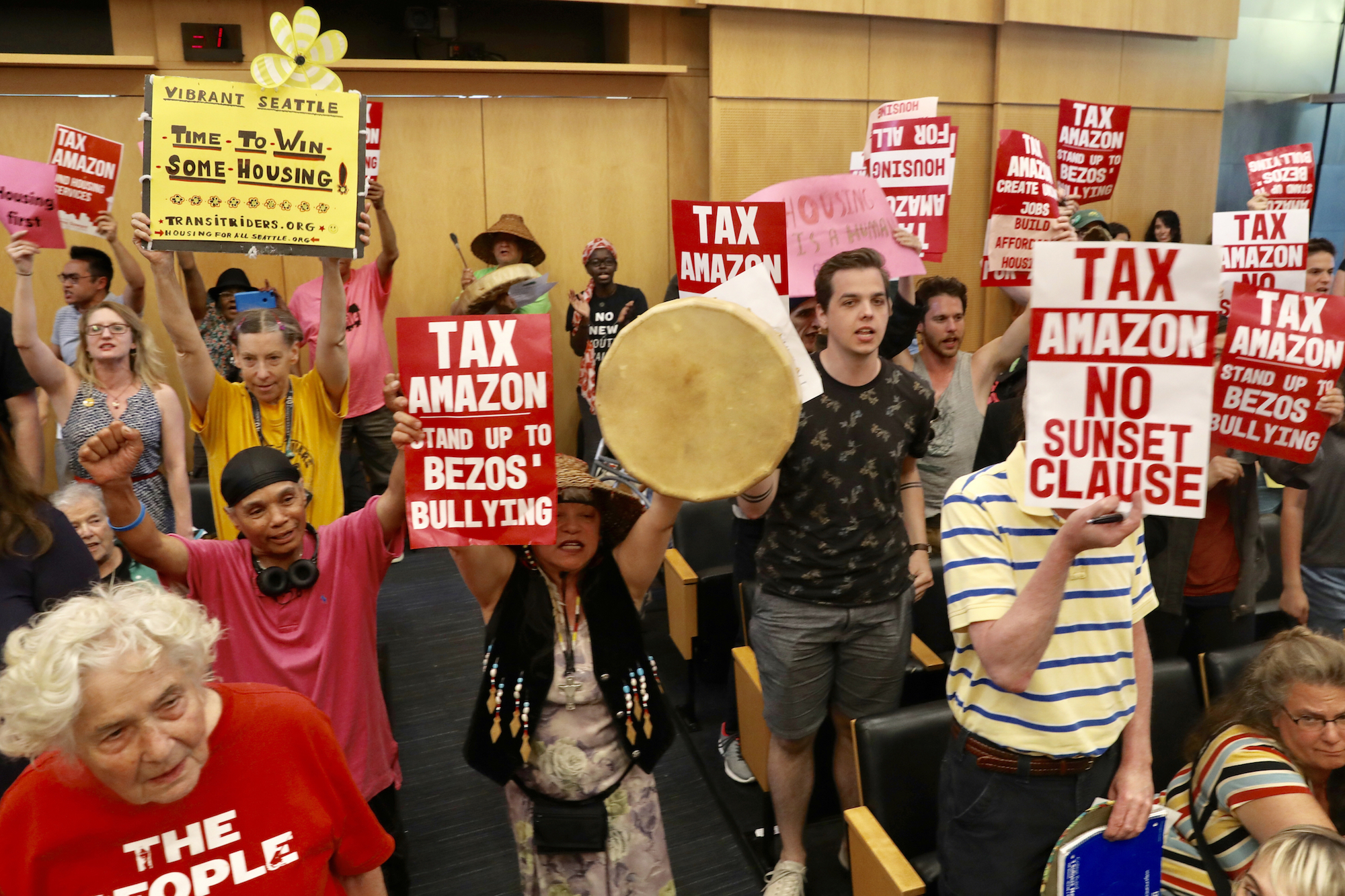 Housing advocates chant during discussions about the Employee Head Tax during a city council session at City Hall in Seattle, May 14, 2018. (Photo by Matt M. McKnight/Crosscut)

The Seattle City Council Monday approved a $275 per employee tax on Seattle’s 600 largest businesses with revenues of $20 million or more. The tax will raise an average $47.5 million per year over the next five years to be spent primarily on building new affordable housing. More shelter beds, garbage cleanup and other stopgap measures will also be funded.

Mayor Jenny Durkan said she will sign the bill into law.

The funds raised, said Councilmember Teresa Mosqueda, is a “significant down payment to make sure our budget more accurately reflects the value of this council, which is that housing is a human right.”

The measure was so contentious, Amazon at one point threatened to halt construction on a new tower downtown and sublease another.

In a statement, Amazon Vice President Drew Herdener said the company was "disappointed" the tax was approved and was still very "apprehensive" about growing in Seattle, but that construction on its paused "Block 18" construction project would resume. He took a shot at City Hall: "The city does not have a revenue problem. It has a spending efficiency problem."

Under the new tax, the e-commerce giant will be on the hook for between $10 million and $13 million per year.

Approval of the tax measure represents an extraordinary step — a higher tax on employees than in any other major American city — and one fiercely opposed by business groups and the city’s major employers.

But Seattle and King County themselves are in an extraordinary time, groaning beneath their own prosperity. Nearly 12,000 people live on the streets or in shelters, in the shadow of the ravenous growth and wealth of the Puget Sound region. Advocates saw only one viable way out of the homelessness crisis: tax businesses in order to generate revenue and accelerate people moving out of homelessness.

The tax will apply to approximately 585 of the city's largest businesses — about 3 percent of all businesses.

The tax will sunset in 2023 and would need to be reinstated by a future city council. The funds will come with a newly established oversight committee. The council will also hire an economist to monitor how it affects hiring in the city.

In a statement, Mayor Durkan said, “This legislation will help us address our homelessness crisis without jeopardizing critical jobs. Because this ordinance represents a true shared solution, and because it lifts up those who have been left behind while also ensuring accountability and transparency, I plan to sign this legislation into law."

Shortly after the council approved the new funding, they passed a spending plan, 5-4. About $32 million a year — or 66 percent of the $50 million annual revenue — will be spent on new housing, constructing 591 new affordable units and staffing an additional 300 units with permanent caseworker support for residents.

The rest of the funding will be spent on more near-term solutions, funding rental subsidies for about 300 units, adding about 250 new shelter beds and adding an additional 150 new parking spaces for people living in their vehicles.

Homeless service providers will get a bump in pay, although much less than the 50 percent some case workers say is necessary to slow debilitating turnover.

How and what to prioritize in terms of homelessness solutions was a contentious issue among elected officials. Mayor Jenny Durkan wanted more focus on emergency solutions, like expanding shelter beds and garbage collection, and last week proposed a tax measure that allocated most of the funding towards those shorter-term solutions. In a press conference following the vote, Durkan said she was worried that new housing would be too slow to come online.

But the council rejected the mayor’s plan, passing a larger proposal — $75 million per year — out of committee last week. They did so, however, knowing full well they didn’t have the six votes to protect it from a veto.

For the bill's original sponsors, who favored $75 million a year over the approved $50 million, their celebration Monday was mixed with melancholy. Councilmember Mike O'Brien, who was confident $75 million a year would make a demonstrable difference in the homelessness crisis, was less dogged about what the council approved Monday. Speaking after the vote, he said he believed the council would need to find even more funding. “I’m acknowledging that I’m settling for this level of service," he said.

Still, despite months of contention, the final bill was approved unanimously, bridging what once seemed to be an insurmountable divide between Socialist Councilmember Kshama Sawant and the Seattle Chamber of Commerce-endorsed council members.

But even Sawant, who favored forcing through the highest possible tax, acknowledged the compromise $50 million tax was the only path forward.

Homeless advocates and activists continued to argue the $47.5 million tax is not enough. They noted it was nearly half of what had originally been proposed — the $500 per employee proposal.

On Monday, advocates repeatedly quoted from a recent report from McKinsey and Co. Consulting that concluded the County needed $400 million a year to address the region’s homelessness crisis.

The $275 per employee tax, was watered down, a “Bezos-Durkan Deal,” several activists said.

“Try to understand the anger on this side of the room,” said Julia Weimer, a member of the Seattle Democratic Socialists of America. “People are suffering.”

Anitra Freeman with Share/Wheel Shelter, which works with the homeless, told the council, “Make no mistake, if you vote for anything less than $75 million, you are voting to accept death.” She added: “You are saying that you would rather cause pain to homeless people than cause pain to Jeff Bezos."

But opponents of any employee tax at all argued that Seattle doesn’t spend its money well. “We are not here to stand up for Amazon or to imply that they are paying their fair share,” said Kathy Bodor, who said she lived in District 7, which includes Downtown and Magnolia. “But we are asking the city to show accountability and fiscal responsibility for the additional tax dollars that are collected.”

The Downtown Seattle Association, which represents downtown businesses, stated its opposition. “We appreciate Mayor Durkan’s efforts to significantly modify the Council's ill-conceived proposal to tax jobs in Seattle,” said spokesperson James Sido. “A tax on jobs at any level is bad economic policy and will negatively impact Seattle’s economy and city tax revenues.”

Other onetime opponents, such as Monty Anderson with Executive Secretary of Seattle Building Trades, came around to the tax once it was shrunk. “I’m really not for the head tax, but given that I bargain for a living and I know what it’s like to move from one spot to another by consensus, I am for the current policy that’s on the table,” he said.

The debate over this tax has gained international coverage as Amazon casts about for a second headquarters. As other cities look to the fight in Seattle, its seen as a harbinger of tensions to come in its new home. On Monday, a group of elected officials from across the country, including from cities vying for Amazon, wrote to Seattle City Hall in support.

With Monday’s passage, the city now has five years to prove both that it’s making progress on homelessness and that the tax is not a job killer.

But for proponents, Monday was greeted with cheers before one more chant: “We’ll be back for more!”