Meet Behind Mars is the debut collection of short stories by novelist and University of Puget Sound professor Renee Simms. 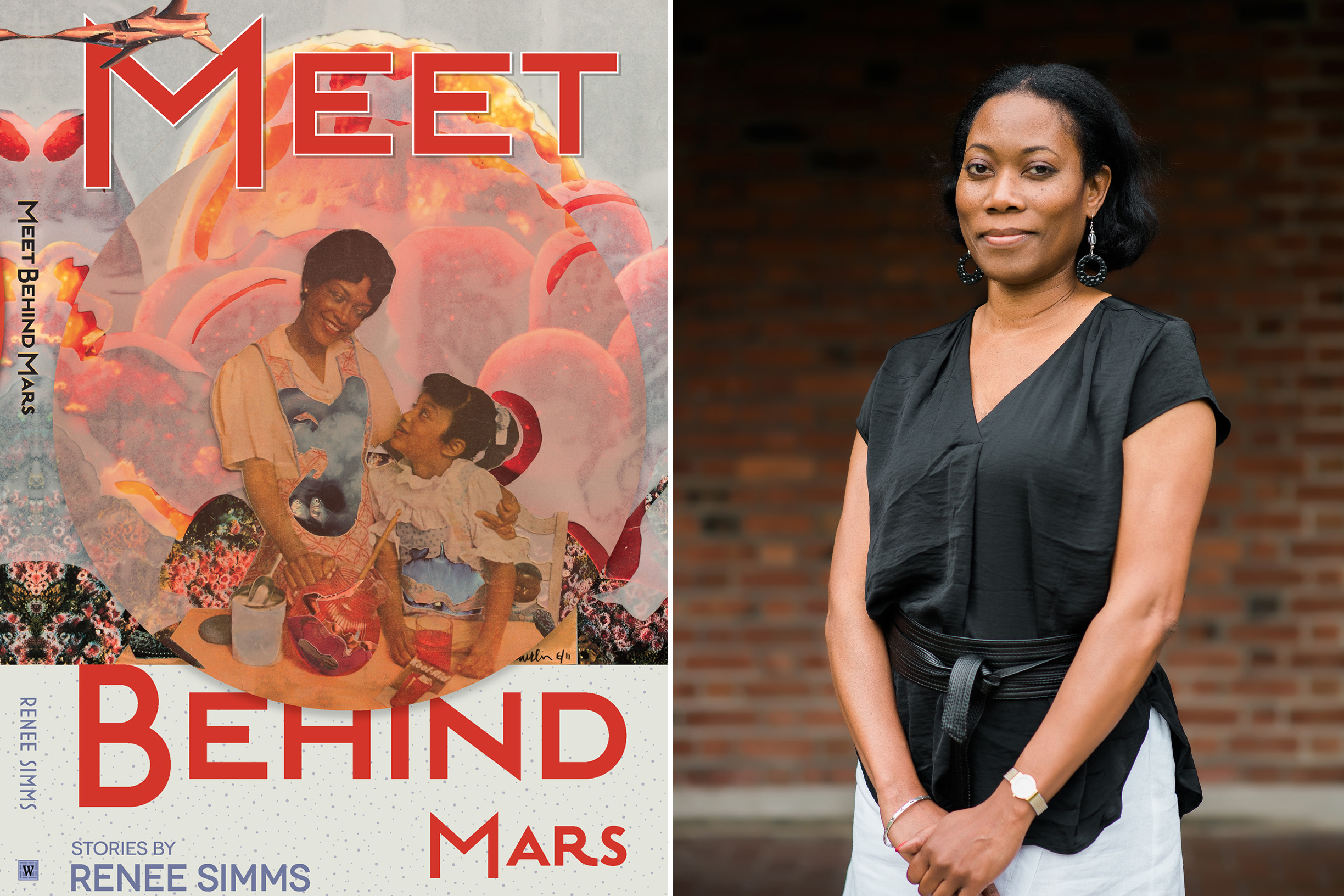 Renee Simms is the Tacoma author of a new collection of short stories, Meet Behind Mars. (Author photo by Ike and Tash in Tacoma).

It’s been a whirlwind year for Tacoma writer Renee Simms, who’s worked steadily on her writing career for over twenty years, well outside the New York literary establishment and timelines that often glamorize writers who are 40 and under.

In the last year, Simms has achieved several life milestones.  She’s about to welcome the publication of her first short story collection Meet Behind Mars. She won a 2018 National Endowment for the Arts fellowship. And she’s about to witness her oldest child graduating from high school in University Place.

Winning the NEA fellowship may seem to represent a linear path to literary stardom, but “my path is not straight,” says Simms, who fits writing into her life whenever she can: “predawn hours, after midnight, when everyone’s asleep.”

Her first book Meet Behind Mars is a collection of short stories that takes place across a variety of continents, narrators and subjectivities — if not planets. “[But the] strength in not having a direct path,” she says, “is that you get to live, have lots of experience in your world. And that’s what you’ll bring to your writing.”

Simms is speaking from personal experience, having traveled a number of indirect paths in her life. Born in Detroit, she moved to Los Angeles and then Arizona. She now teaches African American studies in Tacoma at the University of Puget Sound. She’s pursued several careers, from insurance defense lawyer to a poet to her current careers of fiction writer and professor. Through all of her migrations, Simms has been steadfast in her love of writing. None of her family members or family friends were writers.  “What I didn’t understand,” she says now, “was that I could be a writer.”

Simms now credits the Black arts community with nurturing her devotion to writing. In 1996, she went to her first summer writers’ conference at the Gwendolyn Brooks Conference for Black Literature and Creative Writing at Chicago State University; it drew a heady mix of writers: Amiri Baraka, Sonia Sánchez, Nikki Giovanni. Then she knew: “There was no going back.”

She and her partner moved to Los Angeles in 1997, and asked: “Where do the writers hang out?” Leimert Park was the answer in South Central LA — a neighborhood of Black-owned bookstores, cafes, jazz clubs, theaters, performance galleries and poetry open mikes. She began to submit her work to literary magazines and journals, eventually appearing in places like Callaloo, Full Grown People, The Rumpus and Salon. She applied successfully for residencies at VONA, Ragdale, BreadLoaf and Kimbilio (for writers across the African diaspora). However, “I didn’t have a [long-term] plan,” she admits now.

It wasn’t until 2015 that Simms began to think about a collection of short stories. “Then I could see what made them hang together,” she says. One major piece of career advice had come from her father, who told her that “it’s not what you know, it’s who you know.” “Man, I rejected that early on,” she says, “but it was true for me.”

At the 2016 AWP Conference in Los Angeles, Simms was rooming with Desiree Cooper, who had just published her own book Know the Mother. “I know someone who’s looking for manuscripts,” Cooper said. “Give me your book.” After the conference, Simms started to gather her work but was still somewhat reluctant. Time passed. Cooper nudged her again, this time more strongly. The acquisitions editor for Wayne State University Press expressed interest, eventually accepting the manuscript.

Written over the span of twenty years and multiple locations, Meet Behind Mars revolves around two major themes in African American literature: displacement and freedom. “What would it be like to break free?” the protagonist wonders in “The Cows of Lantau” — a question that haunts and sparks much of the collection. In “High Country,” a writer mother is forced to choose between her art making and child rearing, confronted by her own fictional characters. In “The Body When Buoyant,” an African American refugee woman from Hurricane Katrina serves as caretaker for an older Asian man, searching vainly for home ownership. A dancer comes home to check on her aging parents, confronting their collective aging processes and her own dreams in “You Can Kiss All of That Bye-Bye.”  “American Industrial Physics” is a chilling fictional first-person account of the veterinary assistants who worked with animals used for test crashes in the auto industry.  And with a poetic sense of irony and juxtaposition, a young Black girl plays Maria in “The Sound of Music” during school integration in the late 1970s.

Fans of African American writer Toni Cade Bambara will appreciate much of the humor in Meet Behind Mars: a down-to-earth, we-don’t-suffer-fools sensibility. This humor emerges in stories like “The Cows of Lantau.” In planning a 30th high school reunion, the protagonist talks remotely about food stations and invitation lists with her other classmates of color. However, she considers sending a list of real agenda items like, “What Was School Integration?” and “How We Survived the Reagan Years’ (A prayer circle).”  And in the title story, an African American single mother confronts the microaggressive “requests” of a suburban Northwest community school board with a request of her own. The story has a satirist’s fierce humor, a lawyer’s sense of evidence and an artist’s pursuit of difficult questions. Simms grew up partly on Richard Pryor’s style of humor, an absurdist humor that she says “can mask rage.”

It’s this absurdity that allows Simms’s characters to say that “there’s a reason why so many horror movies happen in suburban settings,” or express their desire to “meet behind Mars” in order to find liberation. The title comes from a 1978 pop song by Cheryl Lynn, “Star Love,” where the singer invites her beloveds to meet behind Mars. For Simms, “Mars is…total freedom. Being apart from others’ ideas, expectations. [Being with other] writers, artists, good food, bourbon. And Prince. Like a residency in outer space, with great discussions.”

Renee Simms will launch her short story collection Meet Behind Mars (Wayne State University Press) with a party featuring poet Fernando Pérez and DJ Smokey Wonder at King’s Books in Tacoma at 7 p.m. on May 3. 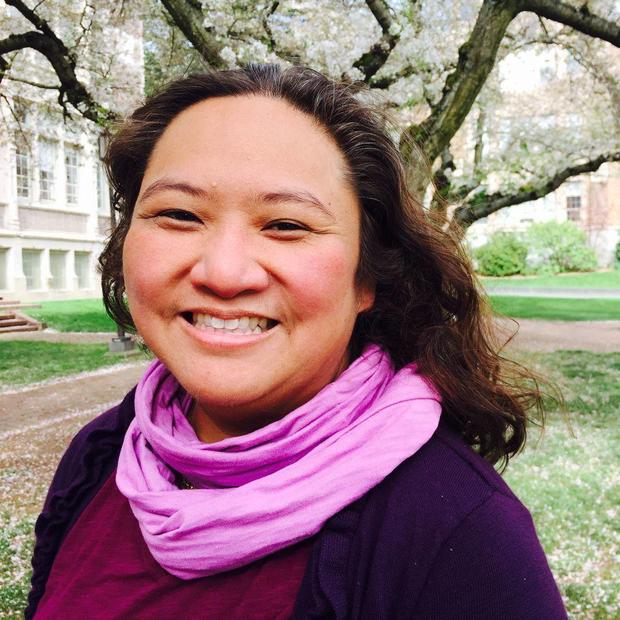