City Hall decapitates its own head tax, leaving a mess 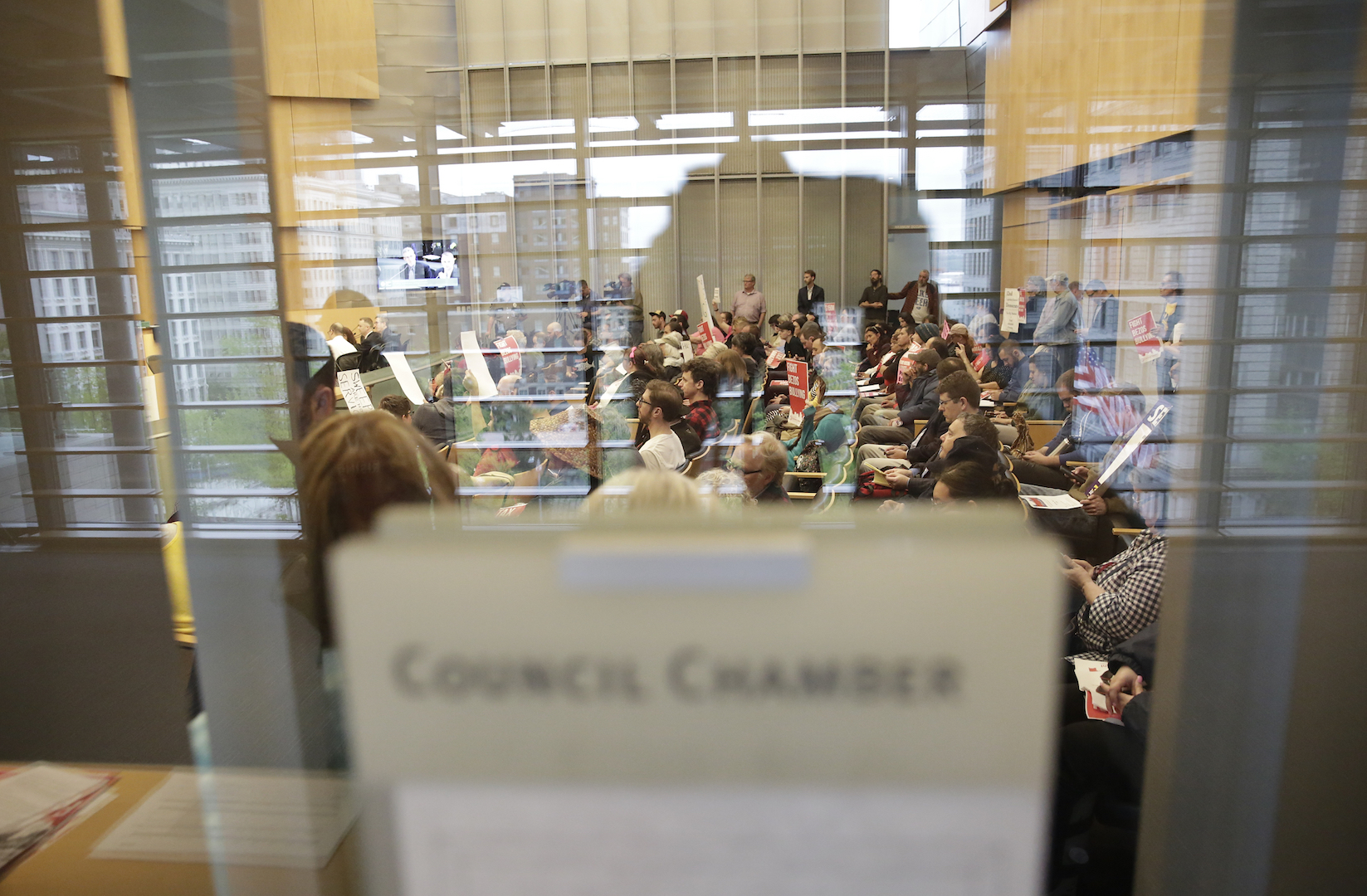 People attend a Seattle City Council special meeting of the Finance and Neighborhoods Committee that discussed the proposed head tax on May 11, 2018 (Jason Redmond for Crosscut).

A majority of the Seattle City Council and Mayor Jenny Durkan are proposing a full-scale retreat on the recently passed head tax. It’s political backpedaling at City Hall on a massive scale — call it Durkan’s Dunkirk.

I can’t remember a time when the City Council unanimously passed a measure and a mayor signed it into law that left the city so divided. Aren’t good compromises defined by grudging acceptance on both sides?

This wasn’t that. Pushback by business interests in the form of a ballot measure to repeal the tax took on momentum and easily and quickly gathered enough signatures to bring it to a public vote. In the face of that backlash, the mayor and council have reversed course. “We heard you,” they acknowledged in a Monday press release announcing the move.

But aren’t you supposed to hear people before the fact, not afterward? Now there’s a political crisis of confidence, questions about whether the council was listening to enough people who aren’t at City Hall waving signs, and a challenge for Durkan to fix the resulting mess. The mayor had forced an unsavory compromise by signing a head tax that was less than originally proposed yet still too much to win Amazon’s support or tolerance, and a spending plan that was not well-devised before the vote.

On top of that, the scheme showed weakness, rather than strength, amid an ongoing and worsening homelessness crisis. Instead of a multi-layer, better funded and more regional plan, it looked like the money raised was not only going to do damage to jobs in Seattle but fail to solve the problem it was aiming at.

Clearly, many council members and the mayor underestimated the anger the tax would engender. I was in Ballard last week having coffee with a friend who has a business there and is the most consistently loyal, progressive Democrat I know. He told me that he didn’t believe in the initiative process and hadn’t signed one in many decades. But he signed the head tax repeal because it was unfair and ill-thought out.

If you’re losing guys like this, you have a big problem.

The tax debate is not over and will enter a new cycle of input, negotiation and, hopefully, more regional funding and cooperation to repair the social safety net and increase shelter for the homeless. But this process will have consequences.

For one thing, it comes at a time when the city has already been boiling over because of change — and certain neighborhoods are being overlooked. Drive down to the South End industrial areas: SoDo and Georgetown. Look at that Seattle: These are the businesses that literally produce the nuts and bolts of the city — manufacturing, distribution centers, warehouses. It ain’t pretty — grime, pollution, cheap motels, sweat and labor. But blue-collar Seattle works here and is an essential part of the tax base. An underestimated aspect of the head tax was its impact on workers in retail, industry, transportation and old-line businesses that have thrived here for a century or more. Driving employers to the burbs: not a good idea.

Not long after it happened, I met Doug Dixon of Pacific Fishing Shipyard at an event near Salmon Bay. This is the cranky curmudgeon who gave Councilmember Mike O’Brien the bum’s rush from a party for the new Nordic Museum; Dixon was the party’s host. Dixon, I’ll admit, was being an asshole, but his anger is rooted in a worry about what he considered existential threats to Ballard’s marine industry. He thinks O’Brien is out to replace the fishing fleet with high-rises and retail shops (like the Stimson Mill project in Ballard). A lot of folks in Ballard resent the threats to Seattle being homeport of the North Pacific fishing fleet — a multi-billion dollar industry. He’s not alone in the maritime business in worrying about the future. Things like the head tax and runaway development are seen as adding to the already large burdens of keeping the industry afloat.

Spending is also a general issue. Durkan has rightly asked for belt-tightening at the city, expecting a development slowdown. Yet basics seem to get ignored despite prosperity: sidewalks aren’t built or aren’t maintained; we hear about $12 million-per-mile bike lanes (a little more complicated than it sounds, but still…). Promised bus service doesn’t materialize. The folks in Magnolia recently learned the city may not replace the failing Magnolia Bridge due to lack of funds. And we’ve spent millions on homelessness without seeing much result.

Another problem: the repeal of the head tax will be seen by many as caving to Amazon. Are they running the city now? Head tax supporters, already frustrated, will be ignited by a repeal. Expect more anger, more red signs waving, more accusations that we’re being pushed around by downtown business interests. Expect Kshama Sawant and Bernie Sanders arm-in-arm decrying our corporate toadyism.

All of this too is setting us up for a wild 2019 City Council election. Already there are indications that at least four incumbents might not run for re-election (all seven district seats are up for election). Anti-head-taxers are mobilizing. And a truer test of the district system will be seen: Are councilmembers delivering for their constituencies? Are they accountable to their districts? Are the potholes being filled? Are the encampments under control? Is everyone focused too much or too little on district issues?

Some opponents of the head tax were also opposed to the Chamber-driven repeal because they thought it would take the business community’s eye off the real ball: getting a new, more business-friendly, perhaps less ideological council elected next year. Taking the tax off the ballot could help reset that. But it could also redouble the efforts of activists to get it back. In any case, we’ll see if Durkan’s Dunkirk is a smart strategic retreat or a political rout.