Forget the head tax, we need a robot tax 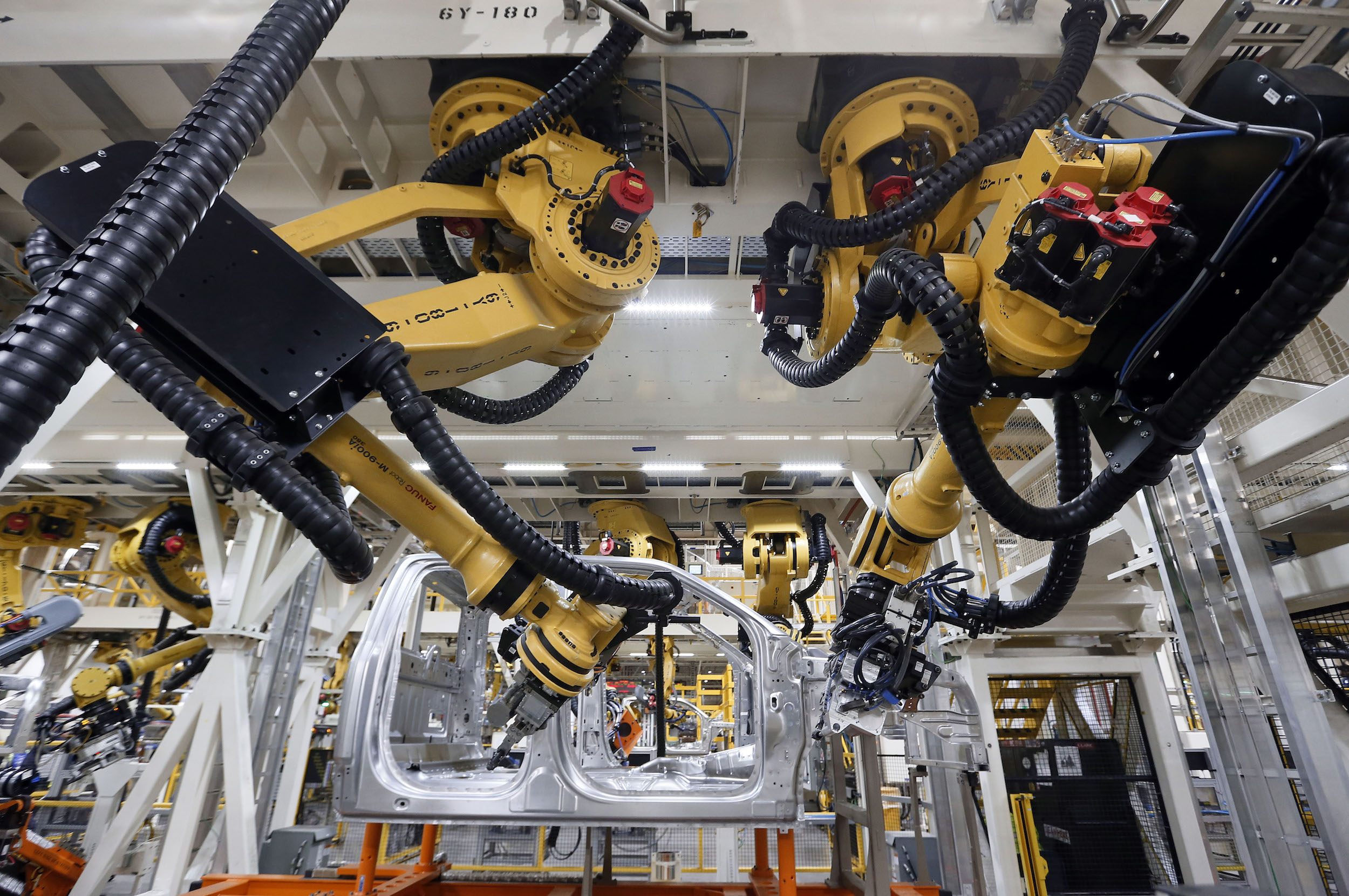 In this Nov. 11, 2014 file photo, robots install rivets on a 2015 Ford F-150 truck at the Dearborn Truck Plant in Dearborn, Mich. Cheaper, better robots will replace human workers in the world's factories at a faster pace over the next decade, pushing manufacturing labor costs down 16 percent, a report from the Boston Consulting Group said Tuesday, Feb. 10, 2015. (AP Photo/Paul Sancya, File)

In Pasadena, a burger-flipping robot named Flippy hopes to eliminate the short-order-cook profession. Though not-quite-ready for mass production, Flippy marks one more milestone for an economy moving faster than most people can adjust.

After the Seattle City Council repealed its controversial $275 per-employee head tax on large companies, council members would be well-served to consider Flippy — and to consider an alternate option to the head tax: a levy on robots that replace human employees.

“Job-stealing robots” sounds silly, a sci-fi headline a generation away. But job-replacing robots — another term for automation — have laid waste to America’s working class for a generation, responsible for 85 percent of lost manufacturing jobs between 2000 and 2010, according to Ball State University’s Center for Business and Research. As robots — or rather, the executives deploying them — take aim at the service sector, Americans should brace for similarly catastrophic losses in professions ranging from bank-telling to trucking.

Working people are not destined to lose this battle; our elected representatives on the Council can tax companies for each robot that replaces human labor. This levy, proposed by Microsoft-founder Bill Gates, would raise much-needed revenue for the city, while slowing the rate of innovation just enough to give workers a fighting chance to catch up.

In a 2017 interview, Gates explains the proposal: A “human worker who does, say, $50,000 worth of work in a factory; that income is taxed and you get income tax, Social Security tax, all those things. If a robot comes in to do the same thing, you’d think we’d tax the robot at a similar level.”

He recommends investing the new revenue in worker re-training, or to fund jobs “where human empathy and understanding are still very, very unique,” such as elder-care or teaching.

Or here’s another idea: we can mark the resources for combating the homelessness crisis, as was intended with the head tax.

A handful of elected officials are gingerly picking up Gates’s suggestion. Jane Kim, member of the San Francisco Board of Supervisors, has launched an effort asking California state legislators to study the idea. The European Parliament last year considered a robot tax for the first time, before rejecting it.

Seattle can move this conversation forward; by virtue of the magnifying glass the world places on our relationship with Amazon and others, we might spark a global debate.

Would the levy send Seattle’s tech giants fleeing? Not in Gates’s estimation: “I don’t think the robot companies are going to be outraged that there might be a tax. It’s OK.” Yes, determining how to apply the tax will be complex; all the more reason, he adds, “for people to start talking about it now.”

Gates also makes explicit a more controversial point: “You ought to be willing to… slow down the speed” of automation. Innovation-absolutists proselytize “creative destruction,” the idea that destruction of old forms of labor birth new and more well-paying work. Yes, horse-and-buggy drivers lamented their taxi-induced obsolescence, the theory goes, but jobs centered around cars soon exceeded what pre-industrial transportation could ever have created.

In 2018, however, creative destruction resembles religious dogma more than an economic policy geared toward real people. Unlike earlier advances, today’s robots are mostly centered on replacing human beings with cheaper and more efficient robots. Yes, some people benefit, but increasingly, only the better-educated.

A 2017 paper by Georgetown’s Center on Education and the Workforce shows that while industrial production has increased significantly over the past quarter-century, 55 percent of “good jobs” are held by four-year degree holders, up from 40 percent in 1991. Automation, in other words, is good for the American economy; it’s just not good for poor and working-class Americans.

This is as true in Seattle as anywhere else. In 2016, the Institute for Spatial Economic Analysis (ISEA) studied how automation would impact employment and wages in hundreds of America’s largest metropolitan statistical areas (MSAs) by 2035. ISEA projects the Seattle metro area to lose a little more than half of our current jobs; significant, though less painful than tech-poor cities like Las Vegas and Orlando.

The report also shows Seattle among the best at retaining wages. The implication: we will lose working-class jobs that can be automated, while increasing high-paying jobs for coders and engineers. If voters want this future, then we should stay the course.

No one suggests a robot tax will be a panacea or that it won’t have unintended consequences. But if Seattleites want companies that pay working wages – for people from all educational backgrounds – a robot tax may be a small step in the right direction. Seattle’s City Council can start the conversation today.