Only in Port Townsend: bow makers 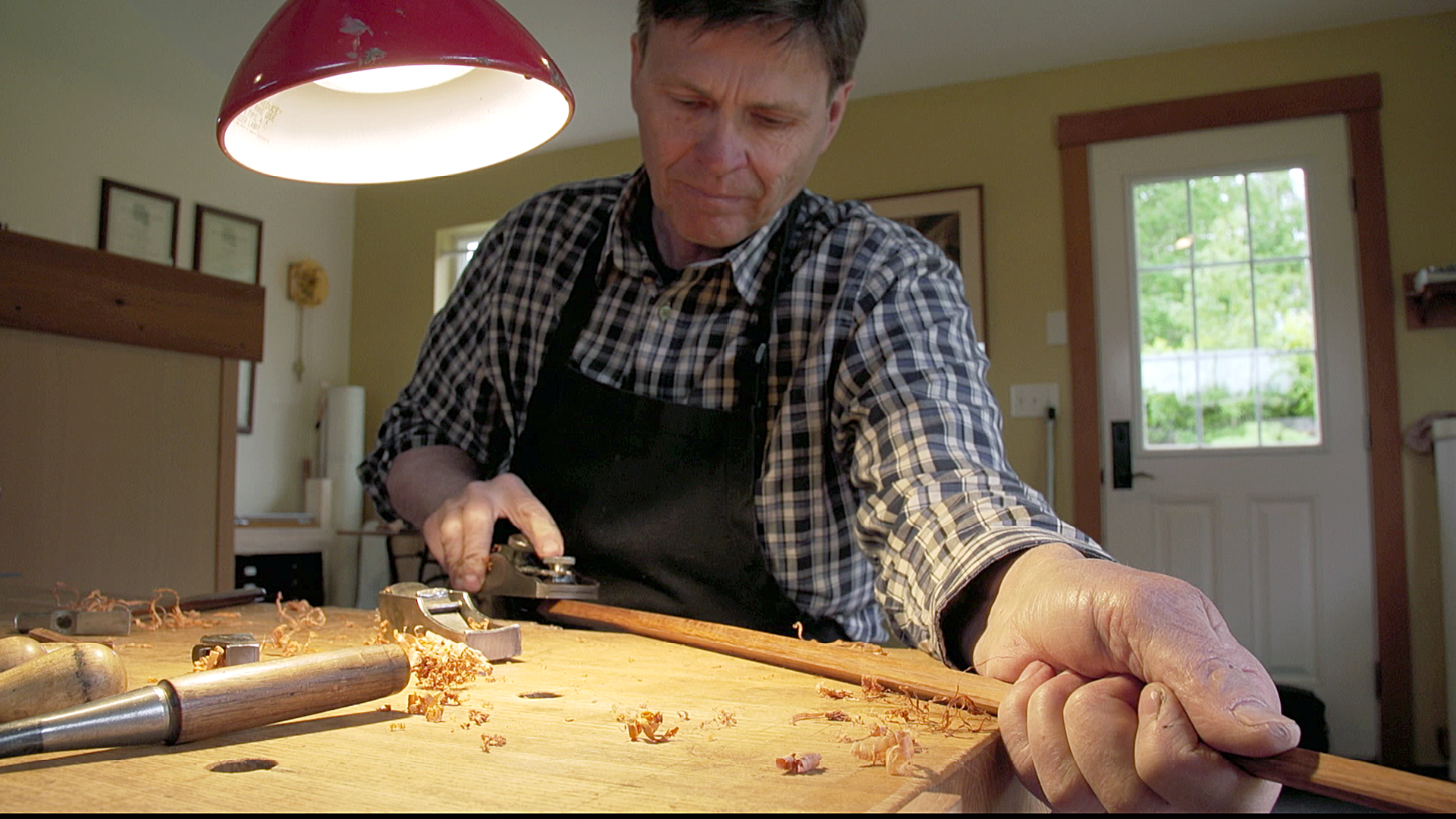 Bow maker Ole Kanestrom shaping a piece of pernambuco wood for a violin bow. “Without a bow, a violin is just a really crummy mandolin," he says. (Still image from a video by Greg Davis for KCTS 9)

Ole Kanestrom leans over his workbench, insistently shaping a long, slender piece of amber-orange wood. Thin,kinky shavings come off the plane as he makes pass after careful pass.

In his Port Townsend studio, he is practicing the art of bow making — an art perfected by French bow maker Francois Tourte 230 years ago that has changed little since.

Kanestrom is part of a community of bow makers who has made the quaint Victorian seaport the capital of bowmaking in North America.

The Port Townsend phenomenon happened after two pioneering artisans, Charles Espey and Paul Martin Siefried, arrived decades ago, attracted to the town’s marine and boating culture. Both were renowned bow makers and they have passed on their knowledge to apprentices. A third generation of Port Townsend bow makers has arrived, with 23-year-old Cody Kowalski, a former Espey apprentice, winning recent international medals in the craft.

“There are bow makers who have come to study with Paul Siefried, and also Charles, from all over the world,” says Kanestrom, who studied with Espey. “It was one of the most difficult times of my life, learning how to be a bow maker. The craft is not a simple one.”

The crafting of a bow begins with a detailed conversation between player and bow maker.

“A player has criteria, things that they need a bow to do,” Kanestrom explains. “ They want a certain sound, they want a certain playability, certain balance, feel, weight, and so all those things, those technical things have to come together.”

“The most satisfying thing to me about being a bow maker is the collaboration between me and the musician," he adds.

In his studio, Kanestrom crafts a violin bow out of a small plank of pernambuco, a precious hardwood that grows only in Brazil. The wood is used to make the most valuable violin, viola and cello bows in the world.

“It has all the qualities,” he explains, as he lines up the bow like a gun barrel to detect bumps or wobbles in the wood. “The strength, the resilience — it's like spring steel. It sings, it does everything. It's the magic music wood.”

After planing the wood, he heats the round, thin stick over an alcohol lamp, then bends it gently and slowly over the edge of his work table. Giving the stick the right arc or camber is critical to a bow’s balance and ability to produce tone or skip off strings with staggering precision needed at the hand of a violinist.

As Seattle Symphony violinist Andy Liang says, “We demand a lot of the bow.”

The final step in the bow making process is sculpting an elegant “frog” from a block of black ebony. (The frog is where a player grips the bow.) Then comes the carving of mortises for attachments, fashioning silver fittings and pinning Mongolian horse hair.

It’ll take an estimated 60 hours of work to complete this one bow.

The reward, says Kanestrom, is his contribution to the world of music.

A fine violin bow from a recognized, medal-winning Port Townsend bow maker like Kanestrom or Kowalski will cost between $6,000 to $10,000.

An earlier version misstated the date that Francois Tourte developed the modern bow.