When objectifying a man’s body is a good thing 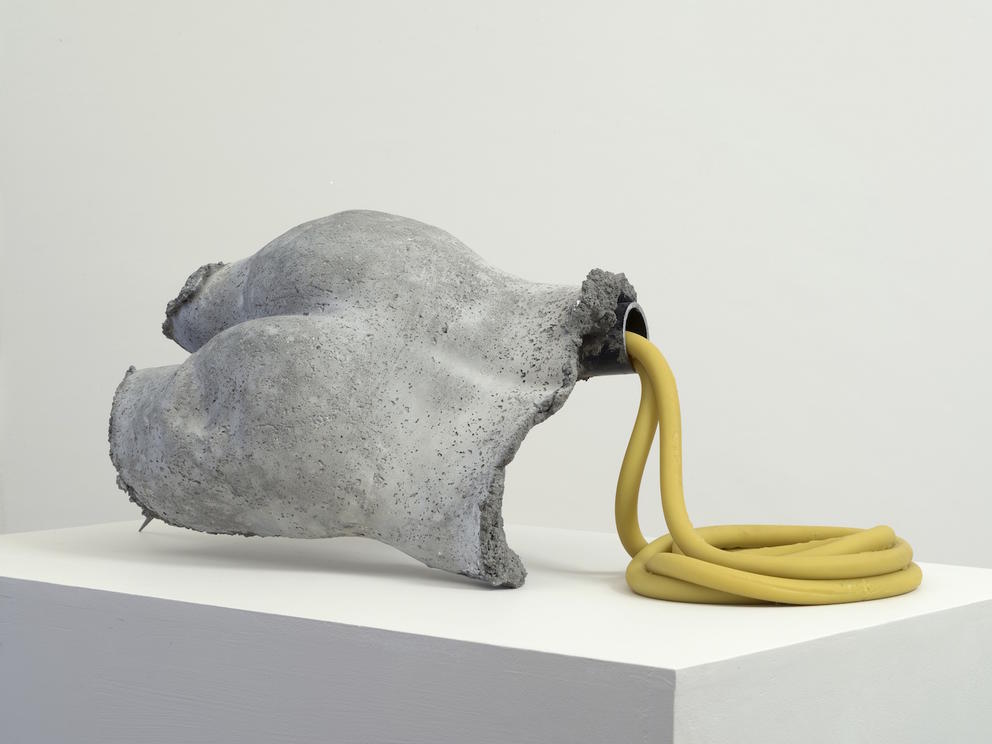 Meet Silas Riener. He’s been “split” into thirty-two pieces. Dire things are happening to most of his body parts — but that isn’t immediately obvious when you enter sculptor Martha Friedman’s mischievously subversive show at the Henry Art Gallery.

Instead, what confronts you in the museum’s downstairs exhibit space is a neat array of 32 rectangular columns holding up seemingly clumsy mishmashes of concrete, rubber tubing and spiked metal. At first glance, they don’t look like much. They certainly don’t look like a deconstructed person.

In the exhibit, called Castoffs, New York City-based Friedman good-humoredly sabotages the whole relationship between artist and muse — hers being Riener, a dancer and friend. Gender-role reversal, fetishization of body parts and even a little sadomasochistic give-and-take are among the things going on here.

“I would objectify him and chop him up,” Friedman said at a recent press preview for the show, “doing strange and extreme things to his body.”

Local dance fans may remember Riener as one of the stars of Merce Cunningham Dance Company in its final years and as a choreographer in his own right, in collaboration with Rashaun Mitchell (their multimedia performance piece, “Tesseract,” came to On the Boards last year).

The dancer provided the artist with an “idealized male body” that was perfect for her purposes, she says. Their process was straightforward. Riener would arrive at her studio and strip off his clothes. Then they would go over possible poses together.

“He has this unbelievable control over his body,” she says, “this ability almost to section off parts of his body.” In addition to that minute muscular control, she adds, he has a big-picture awareness of form and a willingness to go to extremes to achieve it.

Once Riener found his pose, Friedman would slather him with alginate, which when combined with water forms a gummy substance. It took more than half an hour for the alginate to set before she could peel it off, and that sometimes presented problems. When she wanted to do a cast of his shoulders thrust back as far as possible to create wrinkled crevices on his upper back, he told her she would have to tie his arms because he couldn’t hold a pose like that for 30 or 40 minutes.

Out came the ropes.

While their process is intimate — Friedman has to keep scooping and shaping the drying alginate as it drips down Riener’s naked body — Friedman and Riener aren’t a romantic item. She’s married; he’s gay.

Once the alginate has set, she either uses it directly as her molding for her concrete castings or creates an additional “mother mold” from plaster. In either case, pouring concrete into the mold is the next step. While the concrete dries, Friedman inserts the rubber tubing and pointed metal shafts that complete the piece. By accessorizing Riener’s body fragments this way, she says, she’s raising questions “about penetrating or searching.”

Her manipulation of the concrete is, in some cases, deliberately crude. (“I’m working against my own ability to do something well.”) As you peruse the lines of sculptures, it’s sometimes obvious which body part is being featured. Riener’s feet, for instance, always look like feet — a key starting point for Friedman.

If you ever saw Riener’s Bessie Award-winning performance in Cunningham’s “Split Sides,” you’ll know why. He has a remarkable solo in which, for moments at a time, he performs impossible feats of extension and asymmetrical limb-articulations from a single precarious tiptoe-point of balance.

This captivated Friedman: “Just building something from the ground up was interesting to me.”

In other Friedman sculptures, it’s not so clear what you’re looking at. With one of them, it took me a while to register: Oh, that’s Riener’s rump.

How does Riener feel about such sculptural treatment?

“He’s into being objectified,” she says. At the same time, he has a dancer’s usual “anxiety about the body coming apart.” His body is, after all, his instrument; body obsessions come with the territory.

Even though they’re close friends, the sculptor and dancer don’t communicate much while they work. When Riener holds a pose, he has to concentrate and tends not to chat. Once that’s over and Friedman is peeling the molding off him, she has to focus closely on what she’s doing and doesn’t like to be distracted.

“We have these weird truncated conversations,” she laughs, “when one of us is getting deep and the other doesn’t have time for it.”

The spears and tubing she uses in Castoffs are left over from Friedman’s earlier projects. She takes a minimalist approach to poking and pulling them through the drying concrete. In some pieces, the spears and tubing bristle out aggressively toward the viewer. In others, the aggression feels aimed at Riener’s flesh.

Once Riener has done his duties as Friedman’s model, she likes to take total control. Occasionally, though, he’ll drop by her studio and want to try his hand at inserting the rubber tubing and pointed shafts through the drying concrete fragments of his body. After all, they’re his shoulders, his back, his feet. But Friedman tries to discourage this. Riener, she feels, overdoes it.

“Too many accessories,” she says with a warm, firm smile.

Martha Friedman: Castoffs is at the Henry Art Gallery through Feb. 10.