Will Jeff Bezos mess up the Moon? 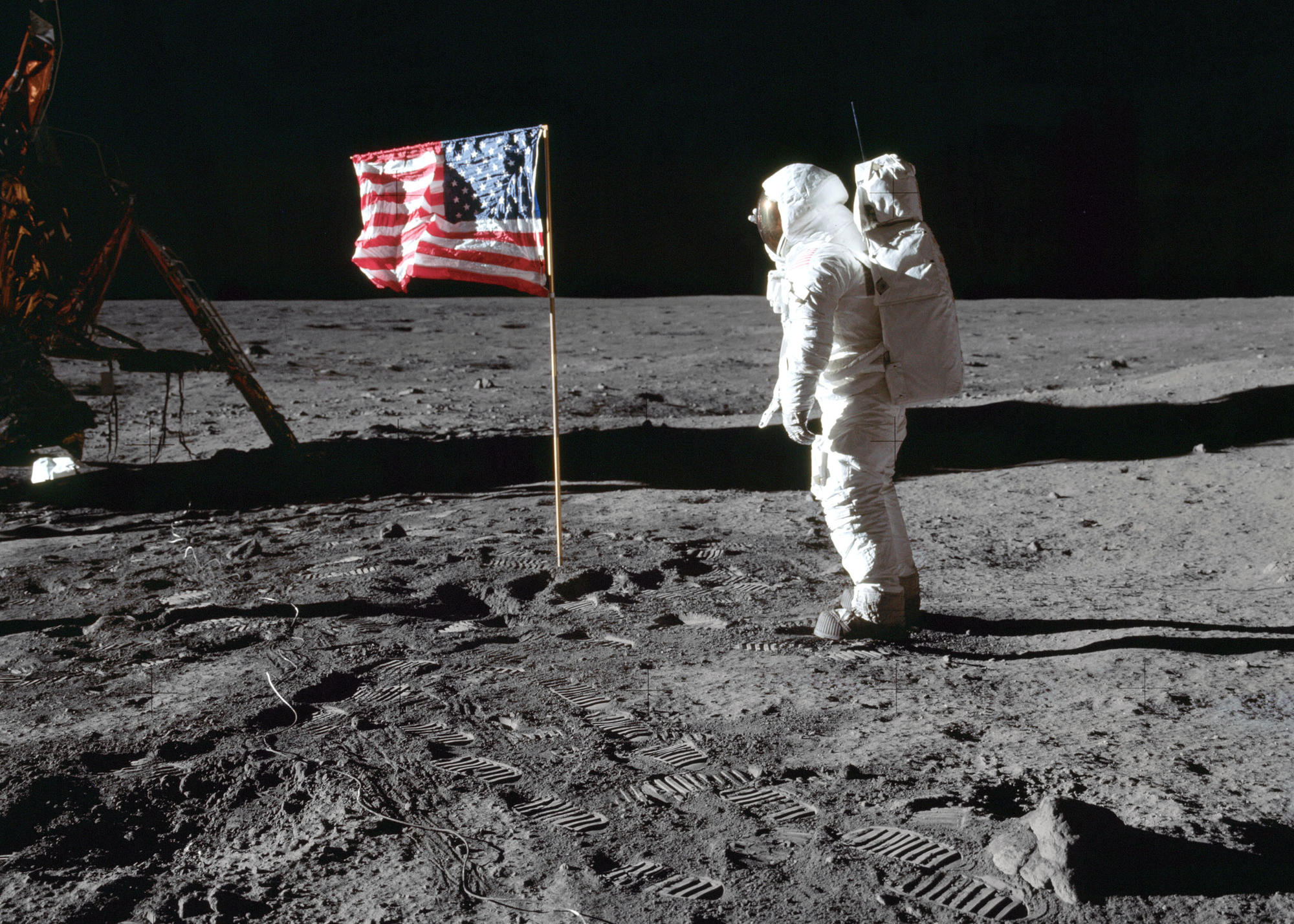 Astronaut Edwin E. Aldrin Jr., lunar module pilot of the first lunar landing mission, poses for a photograph beside the deployed United States flag during an Apollo 11 extravehicular activity (EVA) on the lunar surface, July 20, 1969. (Photo by Neil A. Armstrong via NASA)

We live in an era when billionaire “space barons” are racing to commercialize and populate the cosmos. Elon Musk, Richard Branson, Paul Allen and Jeff Bezos have all heavily invested in boosting private space programs, bringing in what Bezos has called the new “golden age of space exploration.”

It comes at a time when we are on the cusp of celebrating the 50th anniversaries of NASA’s Apollo program which sent humans to the moon in the late 1960s and early ’70s. These expeditions were the first — and so far only — successful efforts to put humans on another world — 12 men in all walked on the moon’s surface.

The space barons are aiming to boost those numbers with new rockets, technologies and strategies.

While the super rich attempt to write new chapters in the story of space exploration, they ought to be accountable for protecting and respecting space’s history, some of which was written right here. I don’t think that can be taken for granted, even though Bezos, at least, seems to personally respect the first round of moon exploration, which was shaped by the work of people associated with an earlier behemoth of the Puget Sound economy, the Boeing Co.

Commemorations of the Apollo explorations are coming to Puget Sound soon. In 2019, the Museum of Flight will put on a major exhibition on the 1969 Moon landing featuring the actual Apollo 11 space capsule. In Kent — home of Boeing’s Kent Space Center and Bezos’ rocket company, Blue Origin — the Kent Downtown Partnership, an improvement group, is trying to raise $125,000 to build a replica of the Lunar Roving Vehicle, the so-called “moon buggies” that went to the moon with the three final Apollo missions. Boeing engineers tested and assembled these expensive vehicles (some $235 million in today’s dollars) so that the astronauts could extend human reach and research across the lunar surface. Kent wants kids to be able to play on a replica in a city park.

Bezos has said that he watched the Apollo 11 landing which put the first men on the moon in July 1969. He was only 5 years old but it made a big impression. And of all the space barons (a term used in the title of a new book), his sights are still set on the moon as the first stage of colonizing the solar system. He’s reportedly converting about $1 billion dollars a year of Amazon stock into his space ventures. Others, like SpaceX rival Elon Musk, are more fixated on Mars, but Bezos believes the moon can provide an intermediate step in getting a foothold in space and other planets. Bezos is also big on moving things like mining and heavy industry into space.

Bezos’ plans include a “permanently inhabited lunar settlement” on the moon, possibly located at the lunar South Pole where there is frozen water that could be used for making fuel, and abundant sunlight for energy. He proposed this in 2017 to NASA as part of a then-secret plan called “Blue Moon,” according to Christian Davenport in his recent book The Space Barons: Elon Musk, Jeff Bezos, and the Quest to Colonize the Cosmos.

Davenport described the differing paths forward of Musk and Bezos as a race between two men “hoping to pick up where Apollo had left off more than a generation earlier.” Bezos recently reiterated his lunar fixation in an interview with Alan Boyle of Geekwire. Blue Origin has a lunar lander in development that could be ready by the “mid-2020s.”

Of course all of this isn’t just on Bezos. Governments too are interested in going back, especially in partnership with private companies like Blue Origin. NASA has reiterated its desire to “lead the return of humans to the moon” with such a program, and the European Space Agency is advocating for moon players to build bases in proximity to one another to create a “Moon Village” for mutual support. India is soon going to attempt to land an unmanned rover on the moon. China is in the planning stages for a manned moon landing.

Other private space tourism efforts propose to sell trips to and around the moon in the near future. In short, after a half century, the moon is poised to be a hot destination again.

The new moon rush has triggered concerns here on earth among academics, archaeologists and space policy folks, and for good reason. What will be the impact of unregulated access to the moon? Will space tourists wreak havoc on the lunar surface? Will historic artifacts left behind by the Apollo moonwalkers be taken, disturbed or damaged?

What if some millionaire — or billionaire — geek decides to tromp on Neil Armstrong’s historic footprints?

Lisa D. Westwood, an archaeologist who teaches in the anthropology department at Cal State Chico, outlined some of the concerns in a survey she wrote published in the book Archaeology and Heritage of the Human Movement Into Space. “The next round of threats are very real for site disturbance by well-intended visitors,” she wrote, “who may be less aware of the destruction they could do while roaming” around the Apollo 11 landing site on the moon’s Sea of Tranquility.

That site is of great historic and, yes, archaeological interest and, as Westwood points out, has been undisturbed since the moment the astronauts left. “It is exceedingly rare to have an archaeological site, so important to human history, remain untouched.” In the same book Beth Laura O’Leary, retired professor of anthropology at New Mexico State University and an advocate of space preservation, writes “There may one day be a Starbucks on the moon if it follows the same trends as tourism on Earth at those previously inaccessible places like the Forbidden City in China, warn-torn zones in Afghanistan … and polar camps in Antarctica.”

On Earth, we have means of protecting such sites — though protections aren’t fail-safe. Tourists do damage to places acknowledged as historically valuable: Thieves rob Native American sites, metal detectorists search for relics on Civil War battlefields. Or think of the man recently who ran his truck over many of the Nazca line glyphs in Peru — a UNESCO World Heritage Site.

Tranquility Base where Armstrong and Aldrin first walked on the moon is a small — about the size of a baseball diamond. But it has those amazing footprints and many artifacts left behind: the U.S. flag, the landing stage of the Lunar Module, the astronauts’ boots, empty food bags, tools, seismic equipment, messages from Earth leaders, containers for collection of the astronauts’ urine, TV and camera equipment, and the list goes on. Many of the discarded objects are in an area dubbed the “Toss Zone,” essentially the moon’s first trash heap. What was disposable in 1969 has attained sacred relic status.

So far there is little Earth law that can protect the Apollo 11 site, or any other manned or unmanned landing sites. The moon doesn’t belong to any country down here, so, for example, the U.S. cannot apply binding landmark, historic site or cultural landscape designations, even though Tranquility Base and landing zones could clearly qualify as national landmarks based on importance. Congress has not acted on proposals to protect the Apollo site, and the United Nations has discussed but not adopted any protections. At least two states, California and New Mexico, have recognized Tranquility Base and its artifacts as historic resources, though that’s largely symbolic as they are not within the jurisdiction of any state — or country — on earth.

In the coming decades of space commercialization, colonization, industrialization and tourism, the moon will be a wide open frontier for governments and entrepreneurs, corporations and Star Trek-inspired billionaires. In a recent book about preserving the Apollo legacy, The Final Mission, Westwood and fellow authors O’Leary and Milford Wayne Donaldson discuss the idea of trying to get moon explorers and exploiters to agree to basic principles of exploration, including respecting the previous landing sites. A non-profit group supporting protection of moon sites, Forallmoonkind.org, announced in late May and effort to map and register all the Apollo sites plus those created by other unmanned probes and landings. And a professor of anthropology from Penn State University, P.J. Capelotti, has proposed a series of “lunar preserves” that could help moon visitors respect site boundaries.

The moon — being the only celestial body humans have walked on — is special, but there are also plenty of historic artifacts orbiting the Earth (historic satellites) and on Earth itself to also recognize, study and possibly protect. Capelotti, in fact, has coined the term “Apollo Culture” as a designation for an era to be studied and examined by archaeologists — the space age equivalent of groups like the Clovis Culture noted for its ancient spear-point technology. Apollo Culture extends from the moon to Earth places in Texas, Arizona and Oregon where testing and training on Lunar-like landscapes for Apollo occurred, or rocket ranges, launch sites and other space facilities where research and development was undertaken.

The coming 50th anniversary of Apollo flights — the first flew in October of 1968 — is a chance to raise awareness about the historical import about those first dusty steps on the moon and the stages that led humans there. That’s a main goal of putting a Lunar Rover in a park in Kent: to inform the upcoming generations of kids who will be walking in those steps someday — or more properly viewing them at a respectful distance in some International Moon Park, funded by Jeff Bezos.