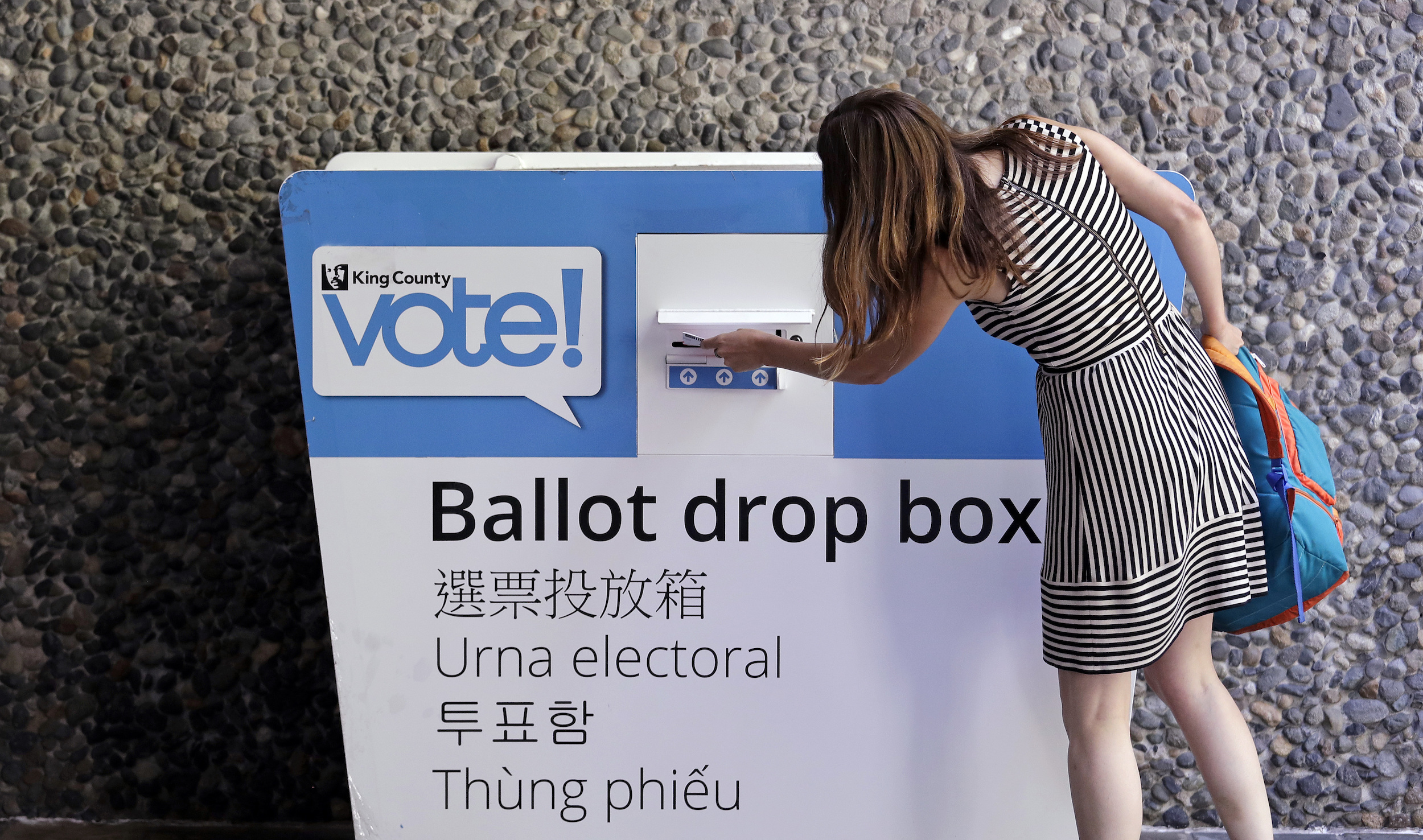 A voter places her ballot into a drop box Tuesday, Aug. 7, 2018, in Seattle. (Photo by Elaine Thompson/AP)

This is an edition of Crosscut’s new election newsletter. Sign up here!

It’s not unusual in American politics for a backlash to follow the election of a new president — so it wasn't exactly surprising that Washington state saw a high voter turnout for the Washington state primary that took place earlier this month. Still, as we near certification of the vote, the numbers have pushed beyond earlier estimates.

In King County, for instance, turnout has exceeded King County Elections’ expectations by 3 percent so far. Current turnout in the county is at 43 percent, while about 40 percent of voters statewide have cast a ballot. Total votes will be finalized on Aug. 24.

The consensus from pundits and pollsters is that these numbers spell trouble for Republicans. This would seem to indicate that our statewide spike is solely a reaction to President Donald Trump’s policies and proclivities. But there could be another factor at play: the new state law that provides prepaid postage for all ballots.

A Washington Post-Schar School poll found that Democrats and Democratic-leaning independents nationwide are more enthusiastic about voting in this year’s midterms. That certainly appears to be the case in Washington.

Pollster Stuart Elway dug into the data and found that in the eight Washington counties that went blue for president, governor and senator in 2016 there was an increase of 9.5 percentage points in the 2018 primary, compared to the 2014 primary election. In counties that voted red for all three offices, voter turnout increased just 5 percentage points between 2014 and 2018.

“It’s not conclusive, but it’s indicative that there is higher turnout and it was substantially higher turnout in blue counties than in red counties,” said Elway, who occasionally works with Crosscut and its sister organization KCTS 9. “That would support a hypothesis that Democrats were more motivated to vote.”

Mark A. Smith, a political science professor at the University of Washington, says that right from the start it was obvious Trump’s election would energize Democrats.

“The overall trend is the out party does well in midterm elections so that is part of what is going on here,” Smith said. “Whether the Democratic turnout is bigger than what you’d normally get, I mean, my sense is that it is.”

All this energy from the Democrats has made it difficult to gauge the impact of pre-paid postage — which is unfortunate, given the trouble it took for the state to adopt the new practice.

After Julie Wise took over as King County Elections Director in 2016, she made a push for paid postage on the county level. After two pilots to see how it would work operationally, the elections office made the request for the budget to run the program and the county council passed the funding.

Soon after, concerns arose that it wouldn’t be fair to other voters in the state if only King County ballots didn't require postage, so Secretary of State Kim Wyman and Gov. Jay Inslee found emergency money for every other county to do the same — $1.2 million. As of Wednesday, King County Elections says it spent $186,700 on prepaid postage.

While the impact on voter turnout is yet to be fully understood, it’s clear there was a change in behavior. The number of ballots returned to ballot boxes this year decreased 15.5 percent despite there being more ballot boxes in King County than previous years.

In the 2017 primary election, about 35 percent of ballots were picked up from drop boxes, compared to just over 32 percent in this year's August primary. The county says it doesn’t have any plans to stop using ballot boxes. Instead, there are some gaps it’s planning to fill by adding more.

“I don’t think one is the replacement for the other,” says Kendall LeVan-Hodson, King County Elections chief of staff. “A number of people don’t trust the postal service and there are a lot of last-minute voters who use ballot boxes.”

She said in the two 2017 special elections where they tested using paid postage, turnout did increase 7 to 10 percent

“I will say that in special elections people return more by mail anyways, and there was only one thing on the ballot,” she said. “Similarly, it was after 2016 so there might have been a presidential election impact as well, but that percent increase is still enormous.”

UW Professor Smith says that with this kind of reform, it’s likely to make some difference in the margins, but not much.

What would make a bigger difference, he says, is same-day voter registration — which will soon be implemented in Washington state via the Access to Democracy bill package that passed last legislative session. Starting June 30, 2019, voters won’t be required to register 29 days prior to the election.

Multiple studies have shown that same-day registration leads to an average increase in turnout of 5 percent. With this new law in place, along with paid postage and a motivated electorate casting ballots in a presidential election, November 2020 could be a record-breaking test of what gets Washingtonians to vote.

Correction: In an earlier version of this story, the graphic showing the percentage of ballots returned via ballot box was mislabeled. The numbers shown represent data from King County, not the entire state of Washington. The graphic has been corrected.