When a ship owner’s dreams die, the vessel may end up as a pollution source. DNR wants to spur cleanups and rural jobs. 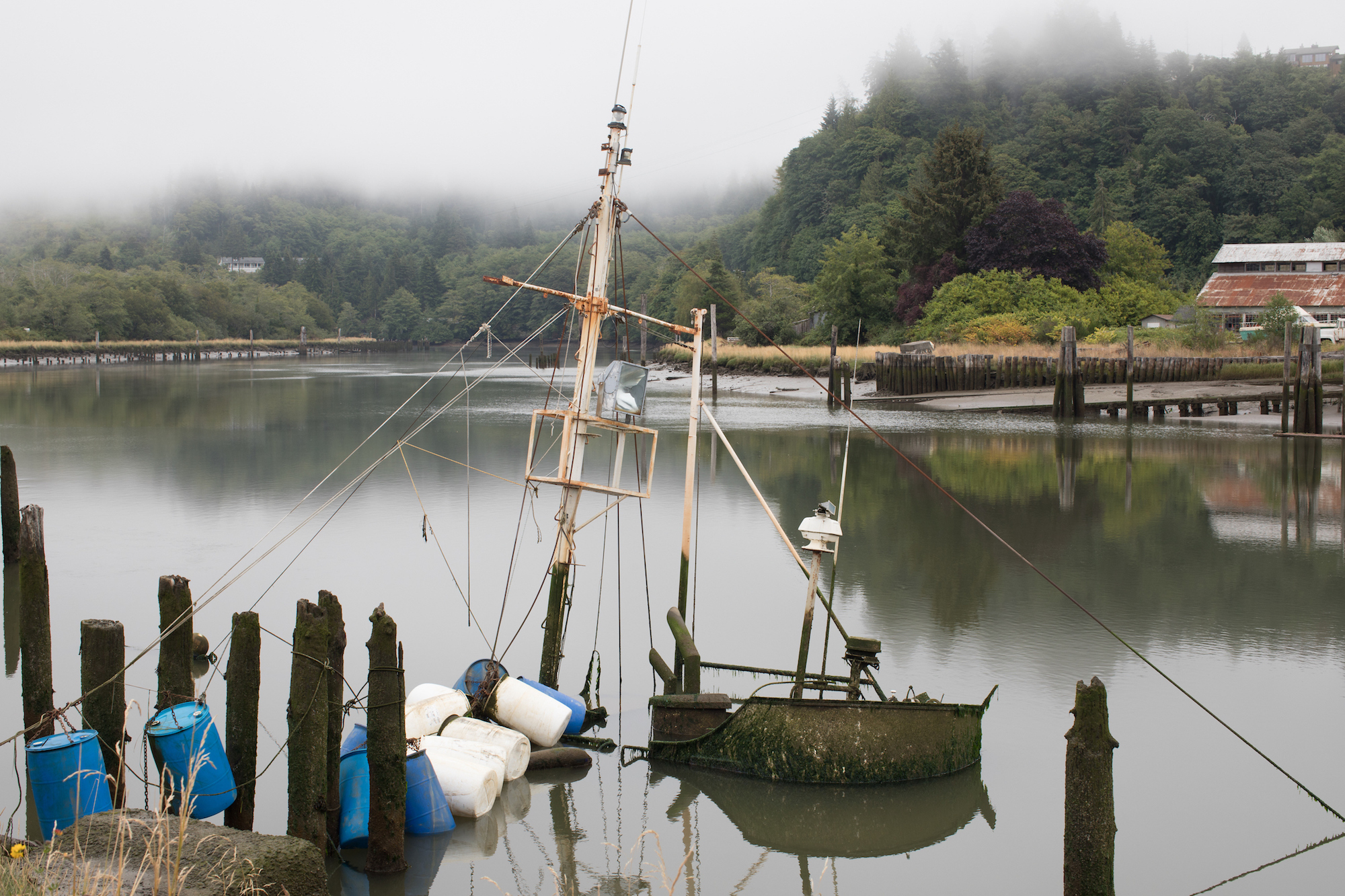 On the banks of the Hoquiam River in southwestern Washington, a mostly sunken vessel lies along a bank at an angle with only its mast and the top of its pilothouse marking its resting place. This stretch of river is a misty, placid working patch of water marked with boats, boatyards and Highway 101 bridges. The derelict we’re looking at is a wooden fishing boat called the Lady Grace, which turned 90 years old this year. Someone wanted to save it, but age caught up.

This is an example of where owning an old boat ends with reality, a case of folks with “great dreams and aspirations, and no money,” says Troy Wood, the man in charge of dealing with derelict vessels in Washington. The unenviable job falls to the Department of Natural Resources, which manages 2.4 million acres of state-owned aquatic lands.

There’s an old saying that a boat is simply a hole in the water into which you dump your cash. They can be cheap to buy, but are expensive to maintain, insure, berth, repair and operate. They age, they weather, they often sink.

When they do, they create another kind of money hole: a maritime cleanup project often leaves taxpayers with the bill for removal. It’s a problem around the state, but here in southwest Washington there’s a plan afoot to deal with derelicts like the Lady Grace. The solution: recycling. 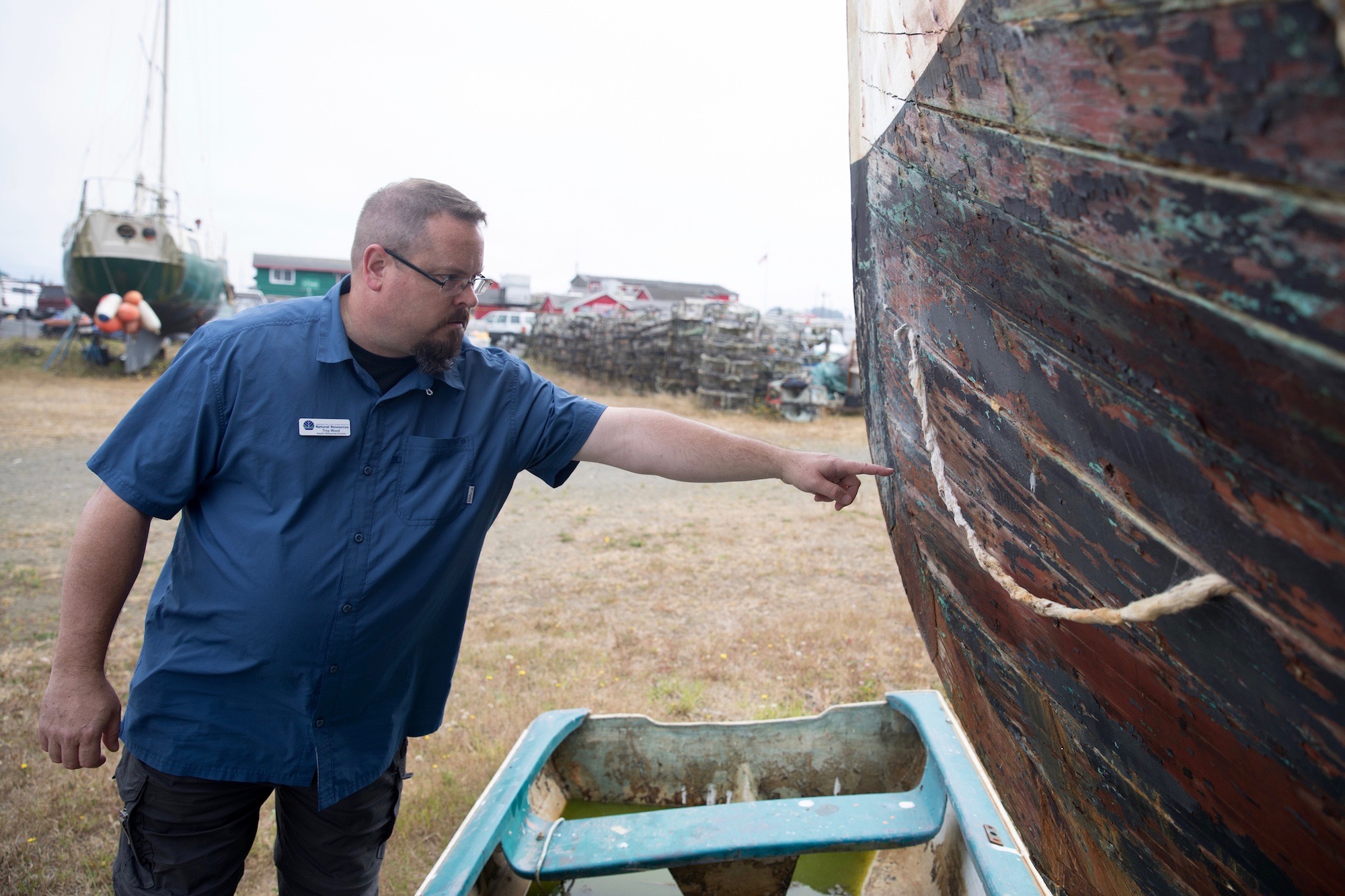 Troy Wood, derelict vessel removal program manager for the state Department of Natural Resources, points out damage on an aging wooden-hulled vessel that could be a “future customer” of a boat recycling center in Ilwaco, Washington.

Vessels of all kinds, from dinghies to cruisers, from fishing boats to icebreakers, are often abandoned on public land — commonly on the state-owned shorelines, river and lake bottoms, and tidelands. These abandoned and derelict vessels leak polluting fuels, they scour the bottom and degrade habitat, let loose contaminants like lead paint and asbestos, and they can pose navigational hazards. DNR counts about 160 such vessels across the state — not counting hundreds more on private property or those working their way toward derelict-hood — boats Wood jokingly describes as “future customers.” Removing derelicts can be pricey. It can cost from $20,000 to $2 million to raise and dispose of a single boat depending on where it is, how big, and what kinds of hazards it poses. If a dive team is required, that alone can cost $700 per hour. All that is in addition to the costs to the Department of Ecology and the Coast Guard who pump out the fuel when the boat first goes down in order to minimize spills.

DNR gets involved when boats are abandoned on public lands. They have funds to help pay for derelict removal to the tune of about $2.5 million per biennium. Sometimes the Legislature will kick in an appropriation for more funds for an urgent and expensive clean-up. In 2013, some $4.5 million was approved for removing multiple large sunken ships from Tacoma’s Hylebos waterway. But such budgets are set only every two years.

DNR’s Wood tries to track down the owners of derelicts, which is sometimes impossible. Some boats were never registered, or the ownership chain is unclear, sometimes identifying marks have been removed. Some people just won’t communicate or cooperate. Some people dump boats on purpose and run from responsibility.

Even where owners are known and cooperative, the task of removal can be tricky. Boats can fall apart when moved and release additional pollutants.

Every boat has its story, Wood says. There’s a concentration of derelicts on Puget Sound where the population center is, but you can find them across the state, even on Eastern Washington’s lakes and rivers. Sometimes, someone buys a boat on its last legs for a year or two of commercial fishing, then lets it sink at a marina. Sometimes owners are amateur preservationists intent on saving a chunk of history — think of the saga of the old streamlined ferry Kalakala which traveled from port-to-port before being scrapped.

Once a sinking derelict is raised, how do you dispose of it?

It turns out that challenge is well-illustrated in the complex waterways along Washington’s Pacific Ocean coast in places like Hoquiam, Willapa Bay and Ilwaco.

After visiting the Lady Grace, we drove down to the Palix River, which feeds into Willapa Bay east of the Long Beach peninsula. Here is one of the most interesting and dangerous derelicts. Along the river bank, just above the Willapa Bay’s vast and productive oyster beds, is the 125-foot, 300-ton Hero, its decks awash, most of its valuables stripped away. The Hero was built in 1968 as an Antarctic research vessel — America’s last wooden-hulled icebreaker. Along with diesel engines it was fitted with sails for “silent running” during wildlife research based out of Palmer Station. It came to the Northwest in the 1980s with the hopes of turning it into a museum. It was eventually purchased for that purpose by a man in Bay Center named Sun Feather LightDancer, but in 2017, it sank at its dock and it’s there still, a kind of eco-time bomb. Wood tells me that DNR rates derelict boats from 1 to 5, with 1 being the worst in terms of immediate potential damage. The Lady Grace is a serious hazard, one of two vessels currently ranked as 1’s in the state.

Besides being adjacent to a U.S. Fish & Wildlife preserve, it poses a threat to the oyster beds and food chain in the estuary. 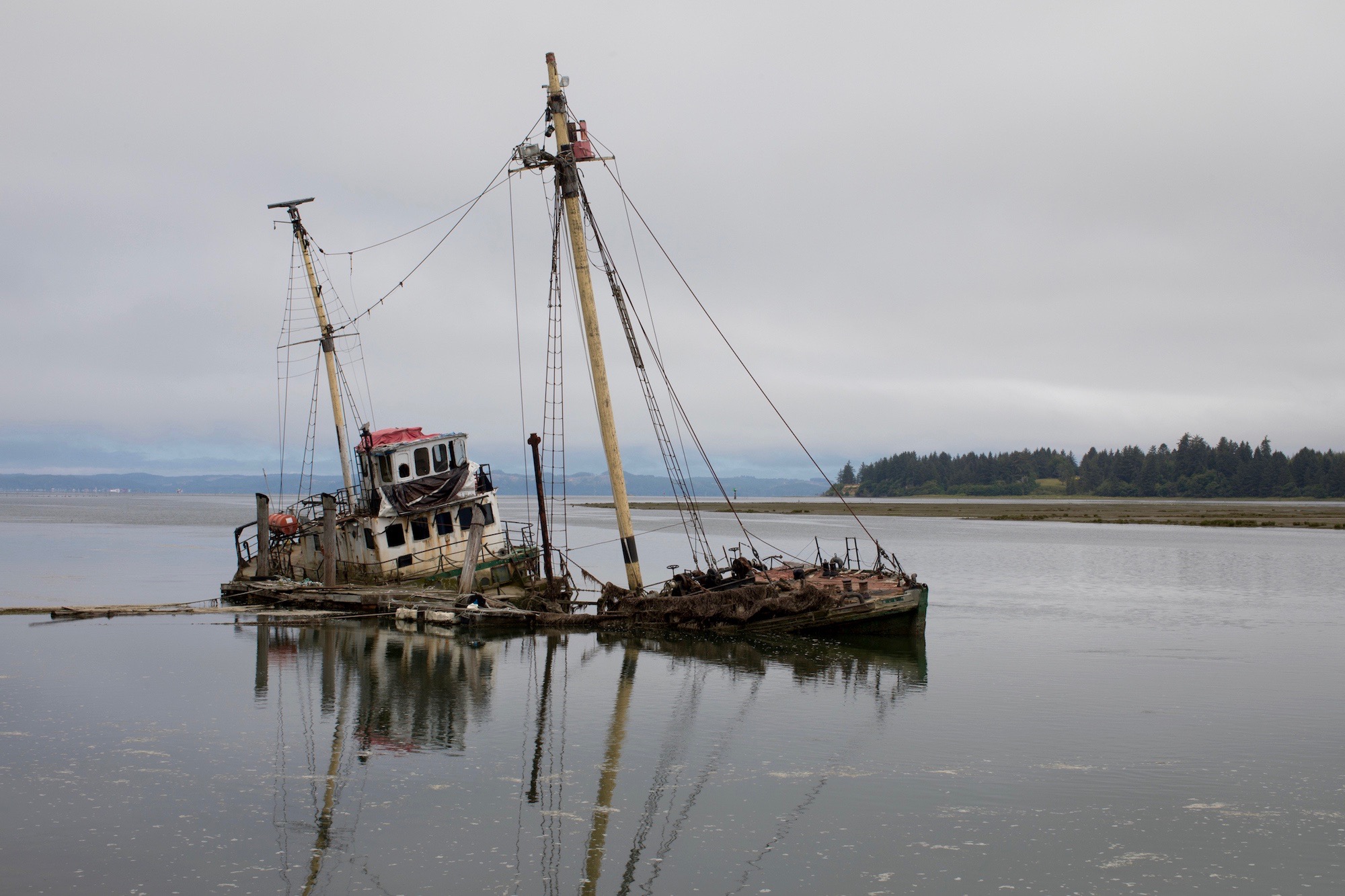 R/V Hero, a 125-foot wooden-hulled Antarctic research vessel, sank in March 2017 on the Palix River near Bay Center, Washington. Built in 1968, she was fitted with sails and labs for wildlife research but now poses a threat to oysters, other wildlife and navigation.

The oyster beds of Washington are already under enough threat and don’t need hydraulic fluids or lead paint chips adding to their challenges. Willapa Bay provides 25 percent of the country’s oysters and creates over 1,800 jobs, according to DNR. They are a huge part of Pacific County’s economy where unemployment is 6.4 percent, the highest west of the Cascades.

Plus, the Hero’s position is precarious. The Palix is a “meandering river” meaning its course changes, which could alter the position of the vessel. It could break up, get cut loose, block navigation. Moving it without doing environmental damage could take $1 million or more.

When it is removed, disposing of it would be a problem. Part of the expense is that the nearest place it could be towed and broken up would be a long voyage to Portland, Port Angeles or even Seattle. Despite the maritime and recreational economy of southwest Washington and the Columbia River, there are few options to dismantle old vessels in the area.

The Port of Ilwaco, however, has a plan — one centered on recycling.

Ilwaco’s port has berths for about 800 boats, permanent and transient, and more than 100 are commercial fishing boats that bring in tuna, anchovies, bottom fish and other treasures depending on the season. You can buy the fish right at the dock. The Port has had its share of abandoned vessels, or ones that have sunk at their moorings, and has worked often with DNR to remove them, says Port manager Guy Glenn, Jr. Ilwaco is the site of a new pilot program to build an indoor vessel dismantling facility large enough to handle big boats and control polluting runoff from the process. 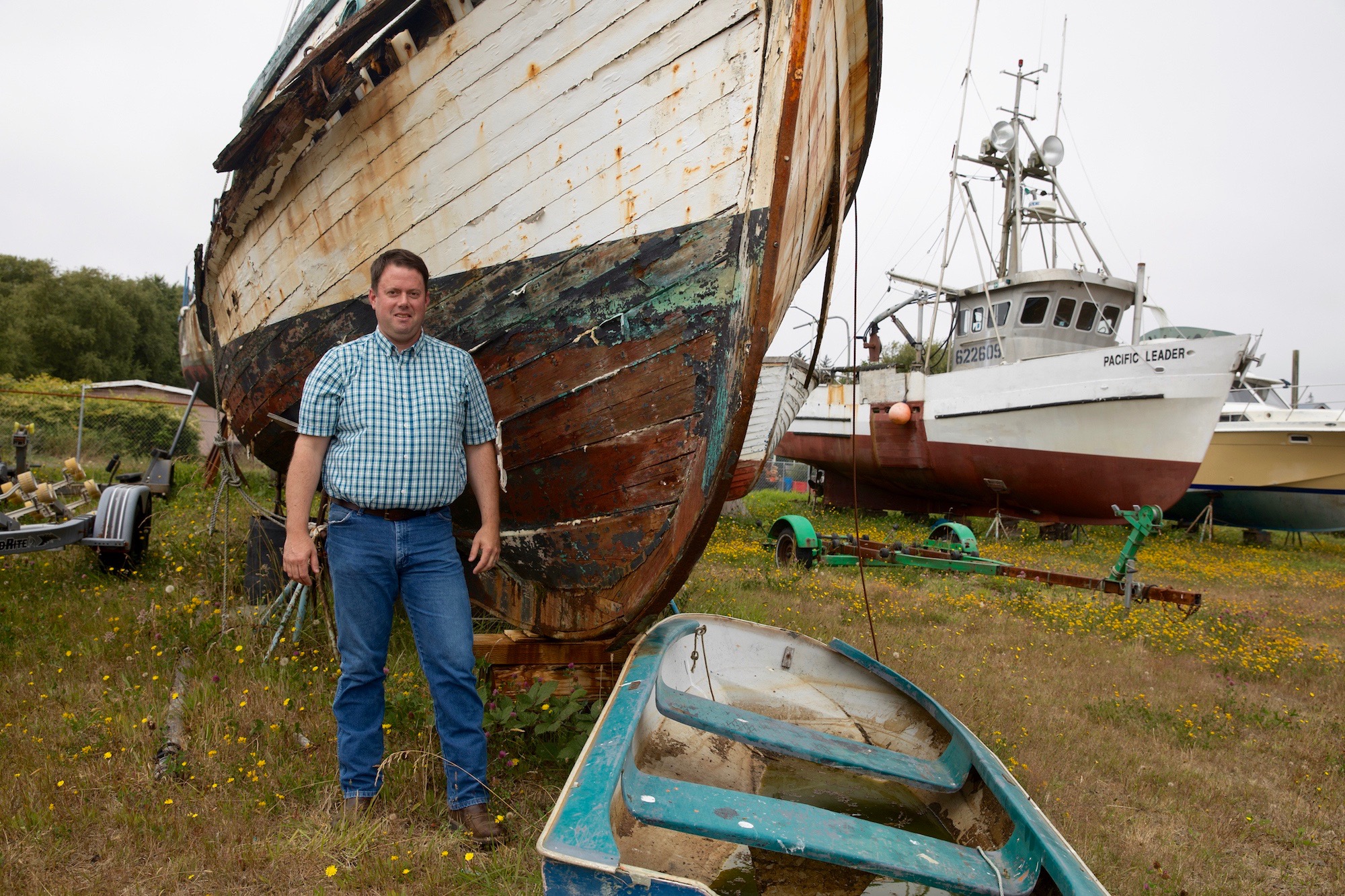 Abandoned boats await recycling in a yard at the Port of Ilwaco. Port Manager Guy Glenn hopes to construct a recycling center there to handle Southwest Washington’s derelicts. DNR is helping to fund the project with a nearly $1 million grant as part of a rural communities program.

Instead of a tow to Port Angeles, regional derelicts would be brought there for on-site recycling. Better yet, abandoned boats that haven’t sunk yet can be recycled before they become a problem.

The Port has a fenced yard containing boats that are awaiting dismantling — a kind of Boat Purgatory. They run the gamut from wooden hulled vessels to steel, fiberglass, even concrete.

Recycling can include stripping fittings that can be sold to restorers, valuable wood that can be repurposed, even fiberglass that can be chopped up and reused in things like highway jersey barriers. Last spring, the state DNR announced a $950,000 grant to help build the recycling facility, which the Port will run with a private partner.

That investment is part of the “Rural Communities Partnership Initiative,” a program coordinated by DNR to find shovel-ready local projects that boost rural economies, protect state lands, and solve environmental and land management problems. The program is driven by local requests.

Southwest Washington is the site of four announced rural initiatives, including Ilwaco’s derelict recycling center, a forest management learning lab for students in partnership with the school district in Kalama; a new research program to control burrowing shrimp, which threaten the oyster beds of Pacific and Gray’s Harbor counties; and the revival of a sawmill in Raymond to produce sustainably harvested hardwoods, like alder.

She likens the lack of boat recycling centers for derelicts to fighting wildfires “without the right equipment to do it.” Only the slow-moving disaster of a sunken ship is harder to see than a forest fire, slower to “burn,” but the damage and costs are real.

The Ilwaco project is slated to open in 2020 and if it works, others recycling centers could follow. 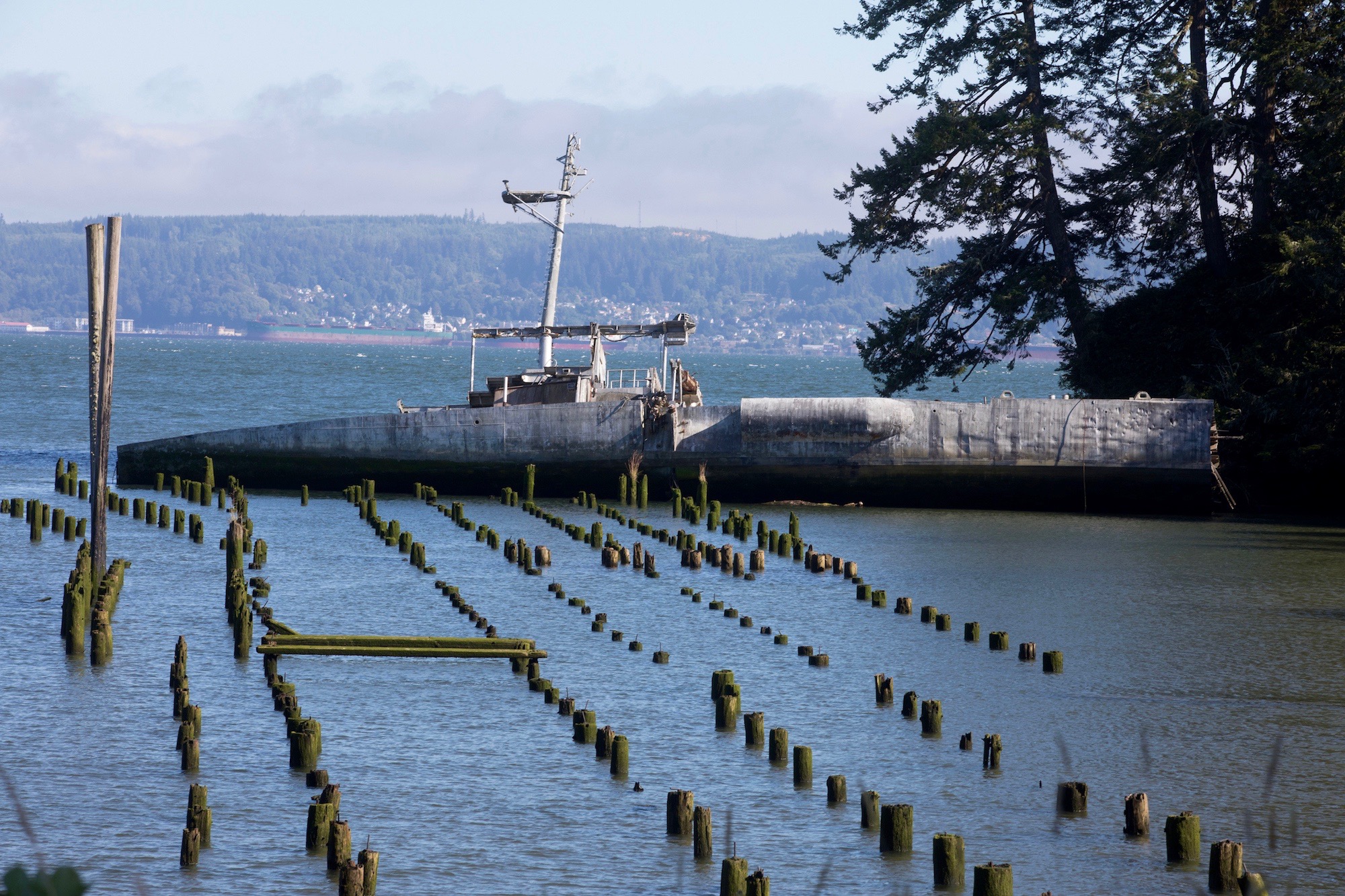 USS Plainview AGH1 has been abandoned since 1996 on the Columbia River one mile from Dismal Nitch, Washington. In the late 1960s this sleek, speedy 212-foot hydrofoil was supposed to be the future of the U.S. Navy.

South of Ilwaco, just down the highway along the Columbia River about a mile or so beyond the Lewis & Clark campsite known as Dismal Nitch, is a very visible derelict. It’s the hulk of the Plainview, a former U.S. Navy hydrofoil that was built in the late 1960s and was supposed to be the next big thing in speedy naval warfare. Described as “the ship that flew,” the Plainview was built at Lockheed Shipyards in Seattle. After years of testing, hydrofoils just didn’t work out for the Navy and eventually this cutting-edge vessel wound up abandoned on the shore of a river that has seen so many wrecks that the area around its mouth is known as “the graveyard of the Pacific.”

The Plainview is worth pulling over to look at — derelicts aren’t always antiques. This one has sleek modern lines of a slim, fast boat. It doesn’t fall under DNR’s purview because it’s on private property with the owner’s permission.

Still, it’s a reminder that derelicts come from many sources. Some are abandoned due to neglect or junked by unscrupulous owners. Others reflect technologies that failed to pan out. The dreams that built boats sometime fizzle, and the vessels might become picturesque wrecks, but also nightmares the rest of us will have to contend with someday. 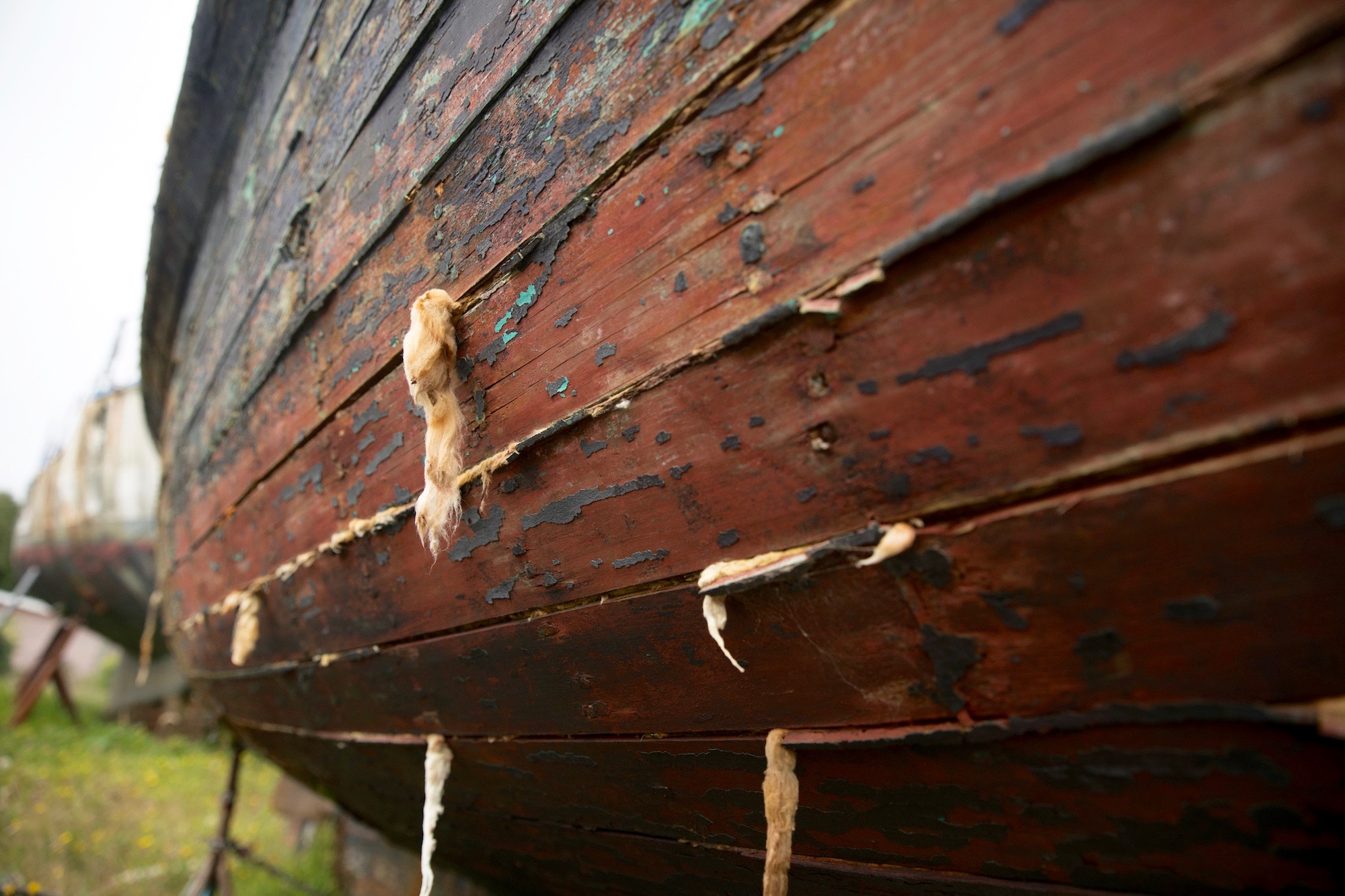 A vessel deteriorateds in a kind of Boat Purgatory at the Port of Ilwaco.

A new bill could make it illegal to discriminate against people who wear styles such as Afros and braids, as well as religious head coverings like hijabs.