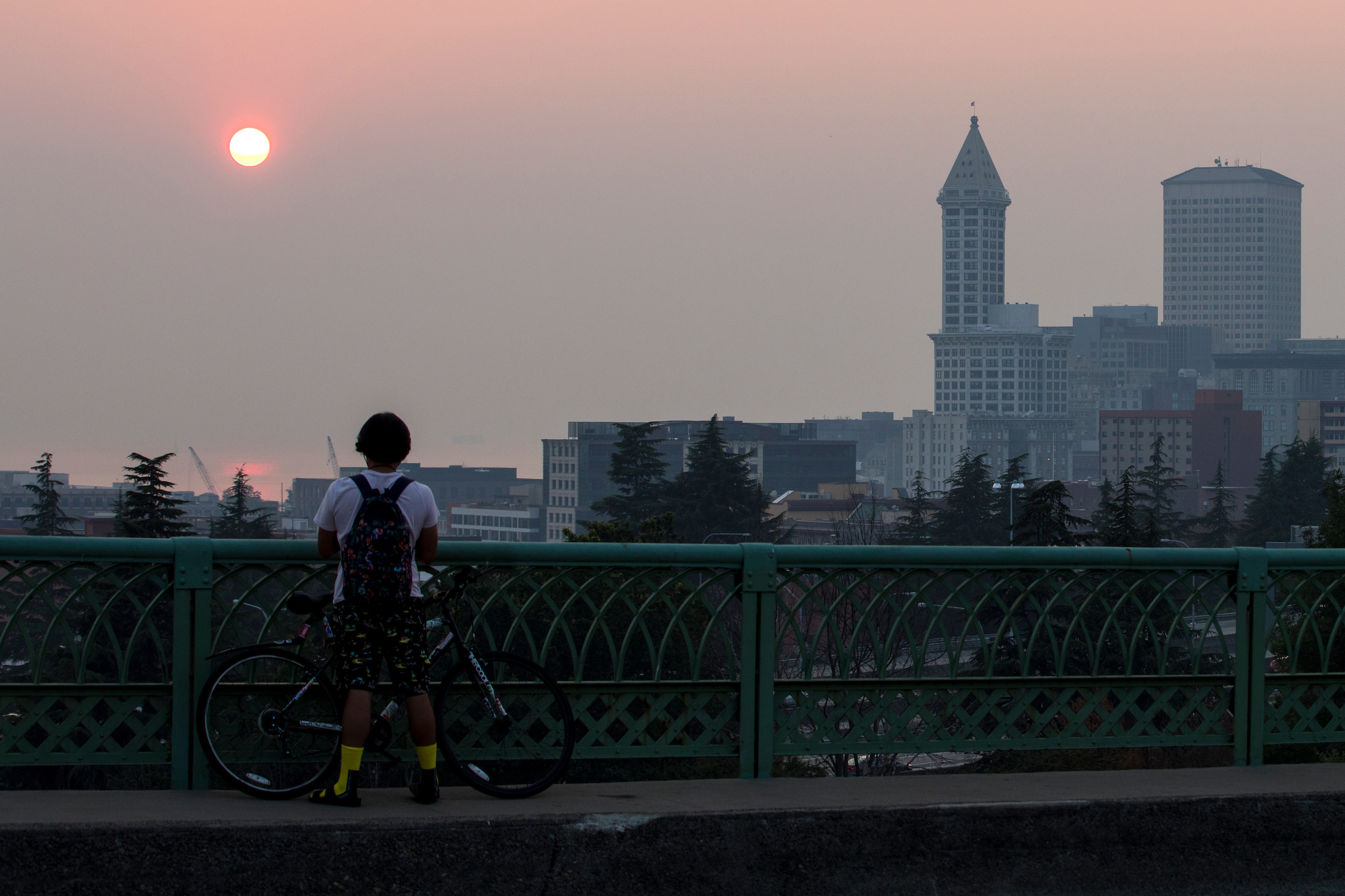 A man stands on the Jose Rizal Bridge in Seattle and looks at a smoky sunset caused by wildfires in British Columbia, August 2, 2017. (Photo by Matt M. McKnight/Crosscut)

The August primary left no doubt among Washington state’s Republicans that they have a challenge on their hands in November.

In congressional races, the Democrats are safe in all of the seats they hold now, while three Republican districts are in play, including one in deep red Eastern Washington. At the legislative district level, Democrats had a very strong showing that suggests they might well increase their slim majorities in Olympia.

The level of Republican concern was reflected in some comments at a recent GOP fundraising event in rural Pierce County at an annual salmon bake on J.T Wilcox’s family farm. Rep. Wilcox helped grow a multigenerational family farm that produces organic milk and eggs (yes, the ones on numerous store shelves), but he is also the state House’s GOP leader, a smart, likable mainstream Republican. His event drew Republican supporters, office holders and candidates from throughout Western Washington. An evening program in a large barn was a kind of pep rally for the fall campaign, and it included sing-a-longs of Woody Guthrie numbers like “Roll on, Columbia” and “This Land is Your Land” along with the usuals like “American the Beautiful.”

GOP state Rep. Mark Hargrove of Covington gave an invocation in which he related a Biblical story about a vast Israeli army that was reduced to small numbers on God’s orders — but still emerged triumphant. “We’re looking for a miracle,” he said.

The GOP audience answered with an “Amen” at the end.

Concern for the GOP’s underdog position this fall was echoed by 8th Congressional District candidate Dino Rossi, who is seeking to fill the seat of the retiring Republican Dave Reichert. Rossi talked about spending months doorbelling the vast district, which is the only one that crosses the Cascade mountains, going from Issaquah and Auburn to Ellensburg and Chelan. Rossi acknowledged that winning the district is going to be “a dog fight.”

Still, he proclaimed, “One of the best parts of the 8th Congressional District: It’s nowhere near Seattle!” The audience whooped in response.

Rossi went on to say he’d been doorbelling on the Sammamish Plateau recently and ran into 30 Democratic volunteers canvassing the area. Guess what? The ones he met were from Seattle!

This elicited some catcalls from the audience.

Bashing Seattle is a GOP staple, one that goes way back as an effective wedge issue. Former U.S. Sen. Slade Gorton used to figure, correctly, that he had to win virtually every county in the state to counteract the sizeable Democratic vote in and around Seattle.

Republican U.S. Senate candidate Susan Hutchison echoed the anti-Seattle theme in her short speech railing against Democratic incumbent Sen. Maria Cantwell, whom she accused of being an absentee senator. “She is a ghost and is hiding and afraid of what she stands for,” Hutchison said. “She represents the values of the very left-wing Seattle power elite.”

Interestingly, there were no Make America Great Again hats or much talk of President Donald Trump at the salmon bake, though it was acknowledged that the Democrats would be hanging the president and his declining approval ratings around the neck of every Republican running for office. Hutchison tried to rile folks by talking about former President Barack Obama, who is actively campaigning now in the mid-terms. She said he was “narcissistic” and will just remind people “how bad he was.”

Like Seattle, Obama and House Speaker Nancy Pelosi are red meat for the GOP base.

A few days later, I had a chance to hear state Democratic Party Chair Tina Podlodowski talk about the fall campaign. Podlodowski was speaking to a luncheon group at the Pike Place Market. She has been working to make the party a “365/24-7” operation that competes in every legislative district across the state, no matter how red. She seemed both chipper and ultra focused, as though the state party were a new tech startup, which in a way it is.

“My goal is world domination,” she joked, saying her background at Microsoft “taught her well.” She was in charge of global training before she left and did a stint on the Seattle City Council and ran for Washington Secretary of State in 2016. She lost to Republican Kim Wyman. In addition to creating more full-time staff positions; using the latest tech tools, apps and data-driven methods; and mobilizing volunteers, donors and voters, she realizes the party needs more presence outside the Puget Sound core. Podlodowski is traveling and recruiting everywhere on what she calls “Tina’s Tavern Tour” of the state.

Does Seattle-bashing really work? I asked her. “The further you get away from Seattle it may work,” she replied, “especially in Central and Eastern Washington.” But she is less worried about Seattle bashing than trying to make inroads elsewhere. A Podlodowski project is the state’s 7th Legislative District, bordering Idaho and British Columbia in the far upper northeast corner of the state. It is deep red politically and her goals are modest. Last year Democrats got 34 percent of the vote there; this year she’s shooting for 38 percent. She’s thinking long term, wanting to find local candidates who can deliver for rural, economically depressed districts like the 7th. She believes rural districts could benefit from Democratic policies like bringing in broadband, which she suggests could revolutionize rural health care and education opportunities.

Another key element to the Democrats' hopes of success this year is women. Female candidates are making strong runs in all three of the state’s truly competitive congressional races.

And women are critical in the suburban vote, where the closest contests tend to be. Who are they? “Women who are kind of pissed-off — and I mean that in the nicest way possible,” said Podlodowski, usually one to speak her mind. They want change, and results. They are a key bloc of the 8th Congressional District, where Podlodowski says the Rossi race with Dr. Kim Schrier is neck-and-neck and likely to come down to turnout in a key arc of suburban voters from Sammamish to Auburn and Pierce County. In the Clark County suburbs north of Portland, women are also key to political science professor Carolyn Young’s winning her 3rd Congressional District challenge of Rep. Jaime Herrera Beutler, a Republican in her fourth term. Health care, education and affordability are among the top issues on the minds of unaffiliated voters statewide, Podlodowski said. It’s no accident that the first big dust-up in the 8th district race is over health care.

When it comes to Trump, Democrats’ candidates don’t have to talk about him, Podlodowski said. Trump does the Democrat’s work for them with his daily tweets, she said.

As for Seattle, she understands the city’s messy politics aren't always helpful in her push for party dominance in all 39 counties. Sometimes she wishes “she could put a bubble on the city.” Still, this year, she is upbeat about Democratic prospects, not praying for miracles.