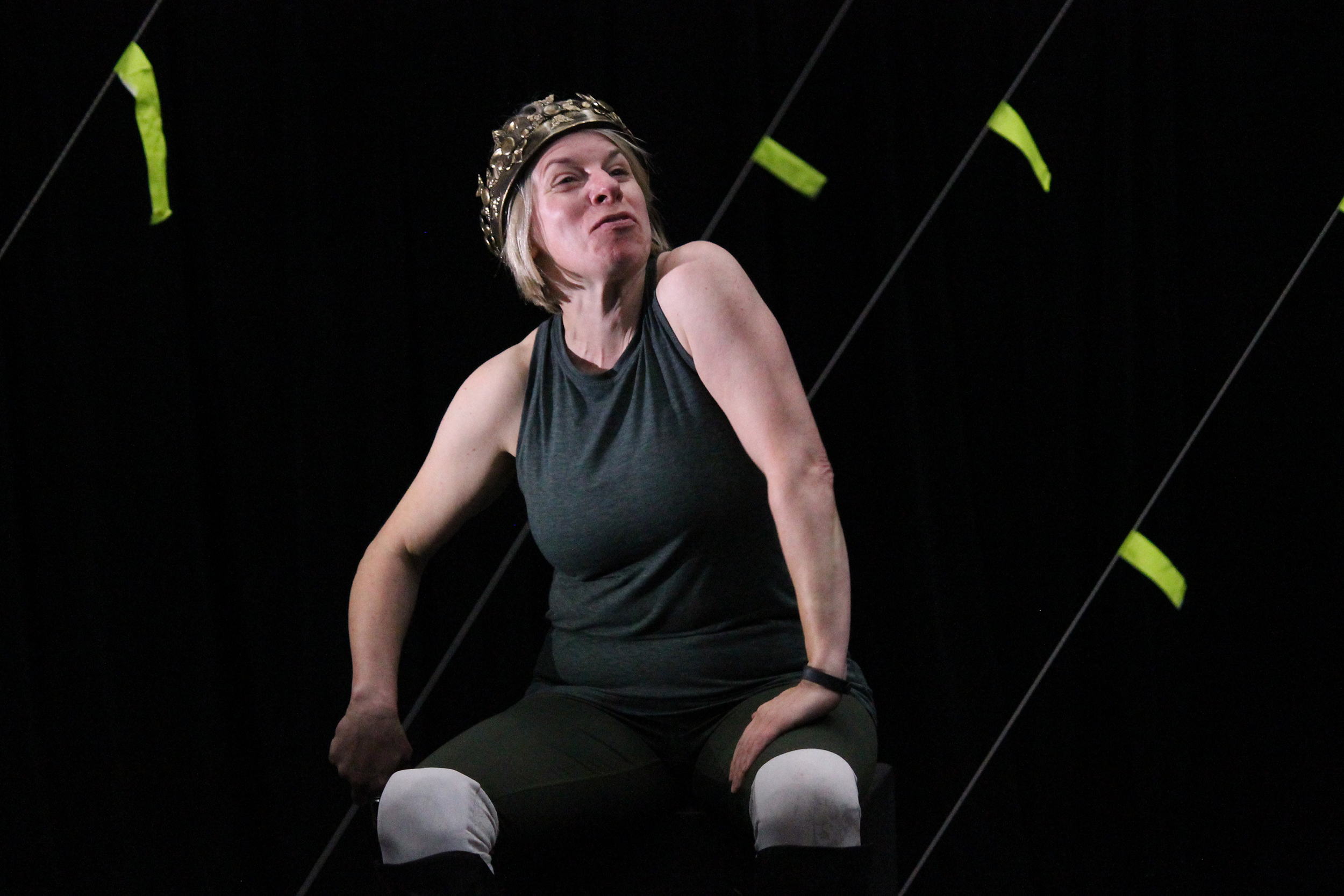 It’s rehearsal day 15 for Seattle Shakespeare’s all-female production of Richard III, and the cast is discussing the bodily nuances of being a ghost. How slowly does a ghost walk? And how lightly? Should the gaze be more piercing or glassy? Nailing a ghostly demeanor is key to the scene (Act V, Scene III), when those murdered in the course of Richard’s vicious pursuit of the throne visit his dreams and spark a crisis of conscience. “But be careful not to get lost in the state of being a ghost,” cautions director Rosa Joshi. “You’re a ghost with an objective.”

The objective is cursing King Richard III, the aggrandizing, deceitful power monger, played by Seattle-based Shakespeare maven Sarah Harlett. During the ghost deliberations, she has been lying on a rectangular black slab at center stage, feigning sleep. Continuing the scene, the spectral parade advances and surrounds Harlett, bending over her and incanting, “despair and die.”

Even in rehearsal, with the cast in t-shirts and jeans, the moment casts a spell. (From her perspective — supine on the plank — Harlett says it’s “very freaky.”) And while the characters are male, the energy reads as female empowerment. It recalls the slumber party game in which participants, usually adolescent girls, surround a friend who is playing dead and chant “light as a feather, stiff as a board” in an attempt to levitate her. The ritual — which has been traced back to the 17th century — reflects the age-old idea that groups of women are capable of tremendous, even supernatural, power when concentrating on a common goal.

Take, for example, an all-female production of one of Shakespeare’s war plays.

Upstart Crow Collective, which is co-producing Richard III with Seattle Shakespeare, was founded in 2006 by director Joshi and local theater veterans Betsy Schwartz and Kate Wisniewski. Its mission is to produce classical works with all-female casts.

“Shakespeare only has a handful of juicy roles for women, and if you’re older, there are hardly any,” explains Harlett, who has performed in every Crow production. She says there’s great joy in the all-female versions. “There are so many talented women in Seattle, and we never get to perform together because we usually have to compete against each other for the roles.”

The gender-swap may sound like a clever gimmick, a nod to the days when all Shakespeare’s female roles were played by men. “Audiences tell us they go in thinking, ‘An all-women show!’” Harlett says, “but soon that fact of it disappears.” With a female production, she says, “We’re not trying to play men, by dropping our voices or acting ‘male,’ we’re just telling a good story.” That said, Harlett concedes, “Whenever you put a solitary gender in a play, something different emerges.”

When developing this play, and the previous Upstart Crow-Seattle Shakespeare co-production, Bring Down the House (based on the Henry VI plays), the group dug into what the characters’ experience of the world at that time would have been. “We talked a lot about how men in that society take up more space,” Harlett says. “They have the power, they own the point of view.” She says as women, they realized, “Some of us make ourselves smaller in a space, or offer thoughts as questions. These are the habits we were paying attention to in rehearsal.”

Harlett, who stands 5'3", seems mountainous in the role of Richard III. Taking a sure-footed stance in tall black boots, she uses her powerful alto voice to great effect. Her aggrandizing, scheming character is prone to both soliloquies and conspiratorial asides to the audience, and Harlett is in total control of each crescendo, outburst and seething threat.

This play is about the rise of a tyrant. And a tyrant cannot rise without complicity of the people around him — he can’t do it alone. ”
— Sarah Harlett

Forgoing the pronounced limp or hunchback some Richards adapt for the play, Harlett simply curls one arm slightly outward at the elbow, her wrist twisted. “Just a little off-kilter,” she says, “because in this society, any ‘otherness’ would be looked upon as the work of the devil.”

Having studied at the Royal Shakespeare Company at Oxford University, Harlett relishes researching her part. She says she and fellow cast member Kate Wisniewski (Queen Margaret) are “text hounds” who “love doing the detective work,” delving into the lines for Shakespeare’s clues. Opening her thick script — heavily marked with penciled notes, like a book of spells — she points to the turning-point soliloquy Richard gives immediately after the ghostly visitation. “See how his lines are shorter here?” she says. “Everywhere else he speaks in long sentences. Shakespeare is telling us something.”

The Bard is signaling the first time in the king’s Machiavellian rise to power that he has experienced self-doubt. “This is the first moment he’s struggling with his conscience,” Harlett says. He’s got the crown, but with it comes paranoia. He careens from one conflicting thought to another, often within a single line of text: Is there a murderer here? No. Yes, I am, and, I am a villain: yet I lie. I am not. It’s as if the emperor suddenly realizes he has no clothes, but is still trying to convince himself he’s dressed in splendor.

“This play is about the rise of a tyrant,” Harlett says. “And a tyrant cannot rise without complicity of the people around him — he can’t do it alone. There are a couple scenes where commoners point out, ‘This seems wrong,’ and others say, ‘Nah, it’ll be ok.’”

If that’s sounding all too familiar, Harlett agrees. “We have some really strong parallels to our current political situation,” she says. “That helps us connect the play to what’s happening in real life, and understand why we’re still performing this play.” She emphasizes, however, that the power of Shakespeare is his relevance through centuries. “It’s so easy for us to make those comparisons to our government. But the parallels have been going on for all time.”

While real-world tyrants are cause for alarm, Harlett says playing one on stage is thrilling. “It’s a dream role,” she says, “but one I didn’t even think to dream about.” Without the all-female production, “I would never have the opportunity.” Surrounded by a powerful group of women, like magic, she rises up into it.