The money for Safeco Field upgrades angers some housing advocates and tourism groups. But it's less than the team originally hoped. 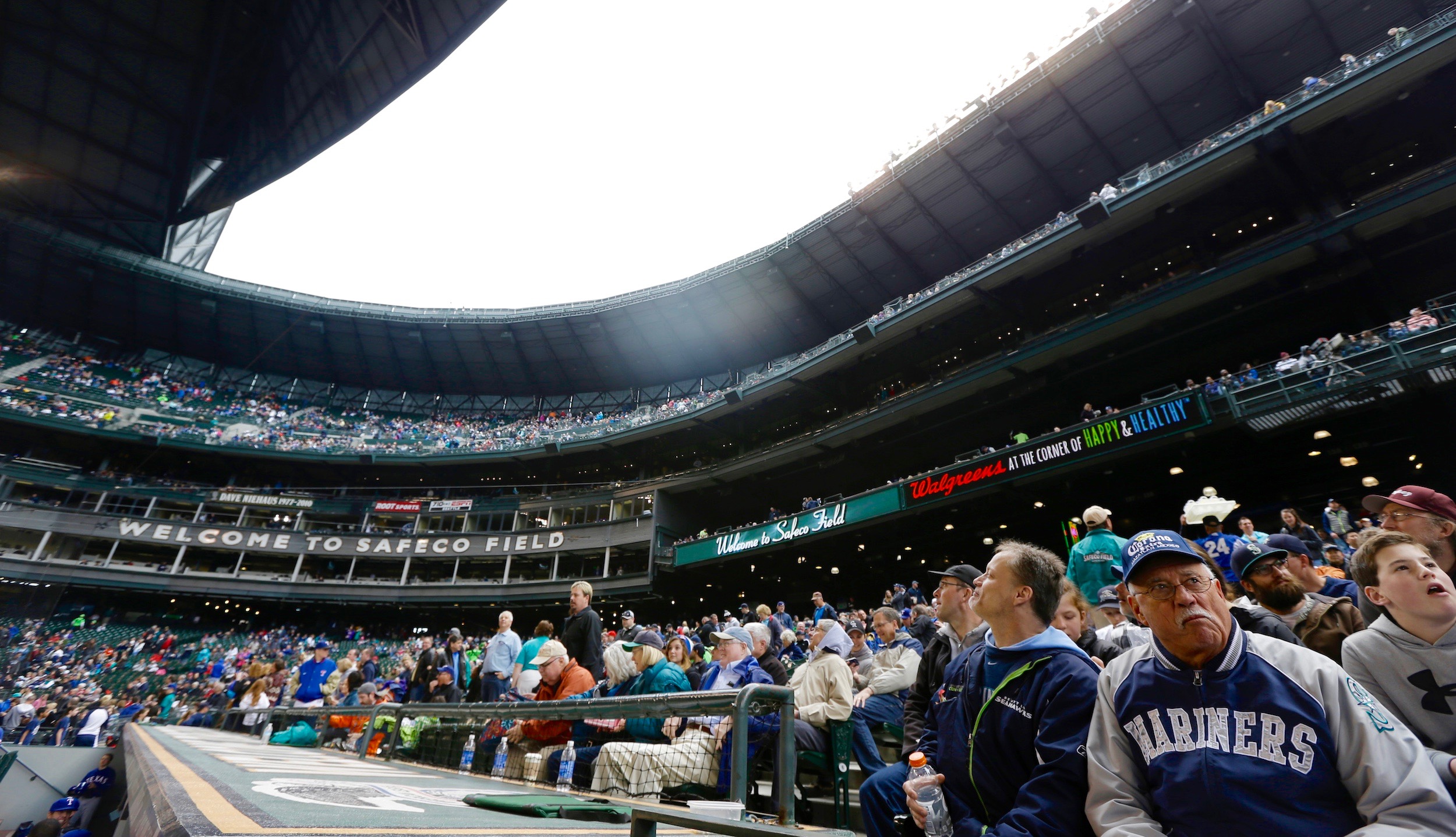 Fans look on as the roof is retracted at Safeco Field, Sunday, April 27, 2014, before a baseball game between the Seattle Mariners and the Texas Rangers in Seattle. (Photo by Ted S. Warren/AP Photo)

In a hard-fought decision, King County Council on Monday approved $135 million for the maintenance of Safeco Field.

A narrow, 5-to-4 vote confirmed a council decision by the same vote earlier this month to give the Seattle Mariners most of the $180 million from hotel and motel taxes they originally sought for upkeep and improvements to their home stadium.

There’d been talk of alternative options — some had hoped to give voters the decision instead of the council — and several amendments sought to revise the stadium spending plans to give more to affordable housing and homeless youth services. But none of the council members voting for or against the proposition had changed their minds since their initial decision on Sept. 5. While some minor amendments were adopted, none affected the $135 million allocated toward maintenance and upgrading of Safeco stadium.

Supporters said the decision was the right thing for the public.

“I truly believe that this regional government made an agreement over 20 years ago with some individuals who came together to save a baseball team that was moving out of town,” said Councilmember Pete von Reichbauer, a sponsor of the ordinance. “I feel very strongly … that sports are a very important part of our community.”

“Why did we end up with this package? Because we made housing a priority,” Councilmember Claudia Balducci said of her support of the ordinance. She echoed other members who called the final proposal a fair compromise.

Councilmember Jeanne Kohl-Welles voted against the proposal, saying that voting “no” doesn’t mean booting out the Mariners.

“That’s not what is before us,” she said. “What we’re facing here is a vote that will in effect reduce by 94 percent the amount of funding that was specified for tourism and promotion.”

She added that the legislation that originally funded the stadium didn’t mean that future improvements had to be paid by taxpayers. “This is an anachronism,” she said of continuing to pay significant amounts of money for the stadium through taxes.

King County taxpayers paid $372 million of the $517 million used to construct the stadium, which opened in 1999. But after King County Executive Dow Constantine proposed that $180 million in lodging tax revenue be funneled into stadium improvements for the next 20 years, a public debate surrounding whether taxpayers should be expected to continue payments has erupted, especially among housing and homeless advocates.

At its Sept. 5 meeting, the council increased the amount of funding for affordable housing, reducing the Mariners’ expected share somewhat but cutting tourism even more. Tourism representatives expressed disappointment with the cut of funding to their industry from an expected $109 million over the 25-year life of the lease to $8 million. Affordable housing wound up with $661 million.

On Monday, Alison Eisinger, the director of King County Coalition on Homelessness, added to comments on cuts towards tourism funding, saying that she felt the council was against pitting affordable housing advocates like herself against those in the tourism industry.

Councilmember Kohl-Welles, after being a sponsor of the original legislation to give the Mariners $180 million, ended up being one of the loudest opponents of paying for stadium improvements.

“People who are voting for this today are going to regret it,” Kohl-Welles said Monday before the vote that cemented Safeco’s funding occurred. Voters, she said, would not approve.