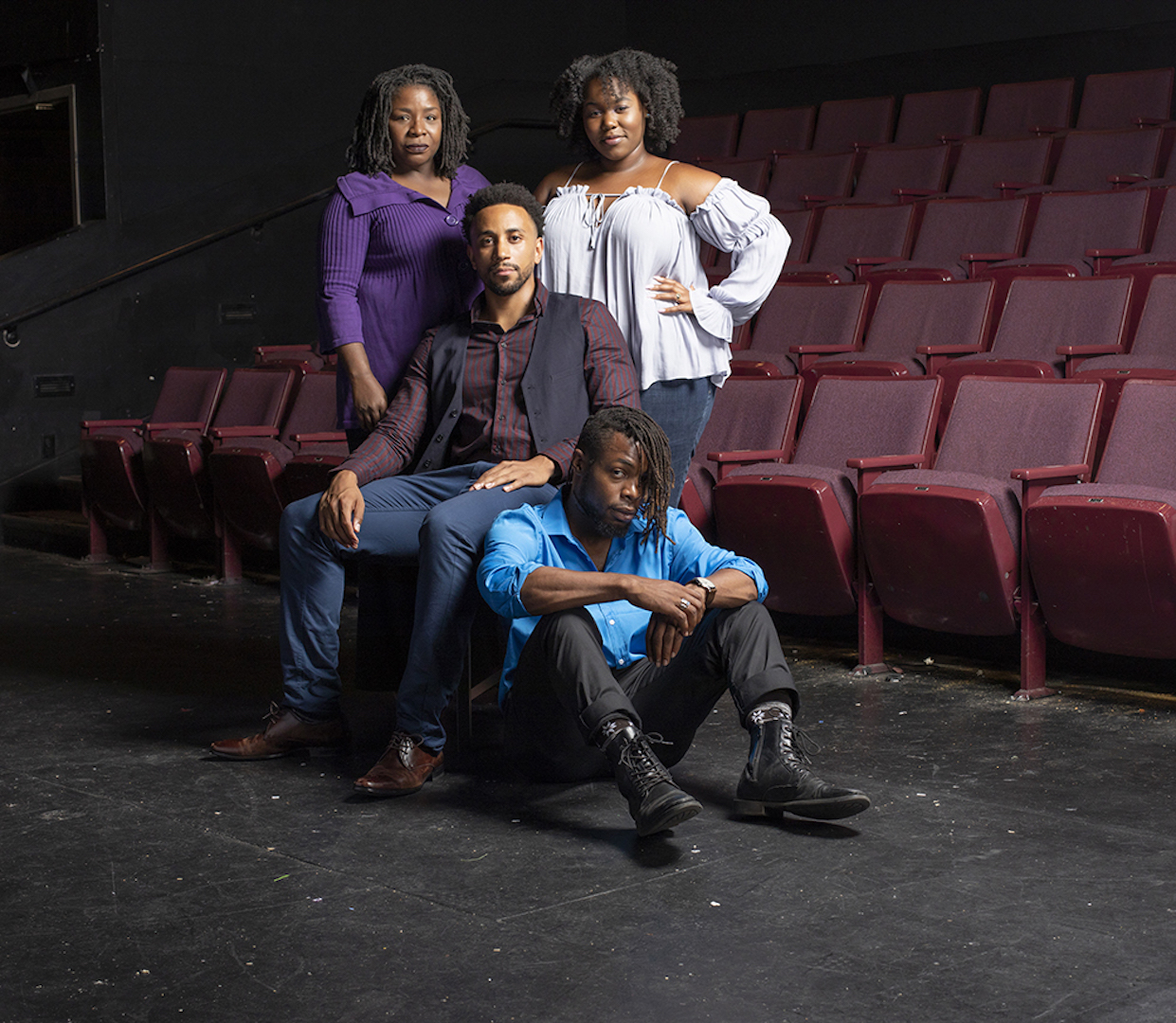 Aretha Franklin’s recent memorial service, broadcast and streamed live, was a celebration of the nonpareil soul diva’s musical genius and religious faith. But it was also a kind of homage to Franklin’s life-long home of Detroit, which despite decades of high crime, economic devastation and reports of its demise remains a vital center of Black urban America. And, according to a recent appraisal in National Geographic, the city (where, incidentally, I was born) has become “tough, cheap, real” and actually, “cool again.”

One measure of that re-emergence: the break-through plays of Dominique Morisseau, including Skeleton Crew, which receives its Seattle premiere this week, Sept. 20–Oct. 14, 2018 at ArtsWest Playhouse. Through her Detroit Projects trilogy, which includes this tale of auto factory workers facing layoffs, Morisseau has become something of a dramatist laureate of her native city.

Setting her dramas in Detroit is “like writing about family,” explained Morisseau, in an email exchange. “It's writing about my culture.”

The motor city, suggests Morisseau, is “an ongoing metaphor for Black America. So as long as I am a living breathing part of Black America, my stories will continue to reflect my love, conflicts and navigation of this reality.”

Morisseau’s theatrical relationship to her hometown has been compared to August Wilson’s devotion to writing a 10-play cycle based in his birthplace of Pittsburgh. And like Wilson, she captures the poetic patois and aspirations of the striving working class people she grew up with.

Morisseau, however, is more topical in her approach. Skeleton Crew is set in 2008, at the start of the national financial meltdown. It portrays, with vigor and empathy, four Detroit auto plant workers coping with their complex personal relations with one another and the very real possibility of layoffs and plant closure.

At the center of the story is Faye, a longtime auto worker and union rep who is just a year short of retiring with a good pension. Faye is whip-smart, sharp-witted and fiercely independent, but also burdened with nagging addictions (to cigarettes and gambling), with homelessness (due to a series of financial setbacks), and with lingering grief over a loved one and conflicting loyalties in the workplace.

“Faye is inspired by many people in my upbringing and life, but most specifically my aunt who, among my immediate family members, had the most intriguing relationship with the factory,” Morisseau notes. “She would work so much overtime, she was narcoleptic. She built her whole life through working at the plant and when the auto industry collapse was a threat, she — along with many others that I know and love — got not nearly the kind of buyout and severance that she deserved.”

It’s a major role for a mature female actress. And Seattle’s Tracy Michelle Hughes is a likely candidate to fulfill its promise at ArtsWest, in a production directed by Jay O’Leary.

Since relocating here in 2002 from San Diego, Hughes has won admiration in a wide range of parts. From her expressive turn as a Black child experiencing the horror of a cross-burning incident in the South, in the one-woman Pretty Fire at Taproot Theatre; to her nosy, snobbish landlord in Intiman Theatre’s Wedding Band, Hughes has infused her work with a vibrant vitality and intelligence.

Chatting over coffee before a rehearsal of Skeleton Crew, Hughes acknowledged that “Faye is so different from me, on the outside. When I think about Faye, she’s very solid, very grounded, very no-nonsense and earthy. And there’s no wearing makeup at the plant, no high heels.”

That’s a shift from the dress code in Hughes’ own full-time job in the corporate sector, as an executive assistant at T-Mobile. But while she chooses her words (and wardrobe) far more carefully than Faye, and is rising in the ranks of the white-collar sector, Hughes also seems as solid and grounded as the character she’s tackling. “We’re both strong Black women,” she emphasized.

At home in Shoreline, she is also an “aunt/mom” raising a 15-year-old nephew in her custody. So with all that’s on her plate, Hughes has had to “pick and choose” her theater jobs carefully, limiting herself to roughly one role a year.

Fortunately for her, and other Black actors in town, there’s been an important uptick recently in Seattle theaters producing contemporary plays featuring African-American actors. Hughes credits that wave to the activism of UW Drama Professor and veteran director Valerie Curtis-Newton, who has drawn stand-out performances by Hughes on several occasions. Notable among them: the vintage Alice Childress drama Trouble in Mind, in which Hughes portrayed a frustrated New York actor who is ambivalent about accepting a major Broadway role in a play with racist overtones.

I wanted to explore the eras that impacted the people I descend from, and [whom] I know and love deeply.”
— Playwright Dominique Morisseau

Hughes said she was drawn to Faye in Skeleton Crew in part because the play presents a realistic, positive depiction of Black characters in the workplace. “On TV, I don’t often see Black people who have a job they’re proud of. But in this, we see people who are proud to get up every day and do the job they do, and who are resilient when things get rough.”

The Obie Award-winning Skeleton Crew is the third and final installment of Morisseau’s Detroit Projects trilogy and the last chronologically — the other two are set in 1949 and 1967. They are stand-alone stories, says the playwright, “But all three are looking at Detroit's changing landscape during a very pivotal moment of socio-economic policy vs. civic unrest, urban development and renewal vs. community displacement, and housing and employment equity vs. economic decline. I wanted to explore the eras that impacted the people I descend from, and [whom] I know and love deeply.”

Morisseau is currently refining her script for Ain’t Too Proud to Beg — The Life and Times of the Temptations, a new musical about the classic Motown singing group. It is set to open on Broadway next spring.

Meanwhile, in Seattle, Hughes is diving into her ArtsWest performance, and not worrying about her next gig. “Something will come up,” she said with a confident smile. “I’ve been blessed. I’ve been lucky my whole career to only do shows that touch me. And every show I do teaches me something.”

And what has she learned from Skeleton Crew? “Faye has taught me that life may not go the way you wanted it to, but that’s OK. You’re still alive, you’re still here. It’s too much to go through all of this, and just be negative.”