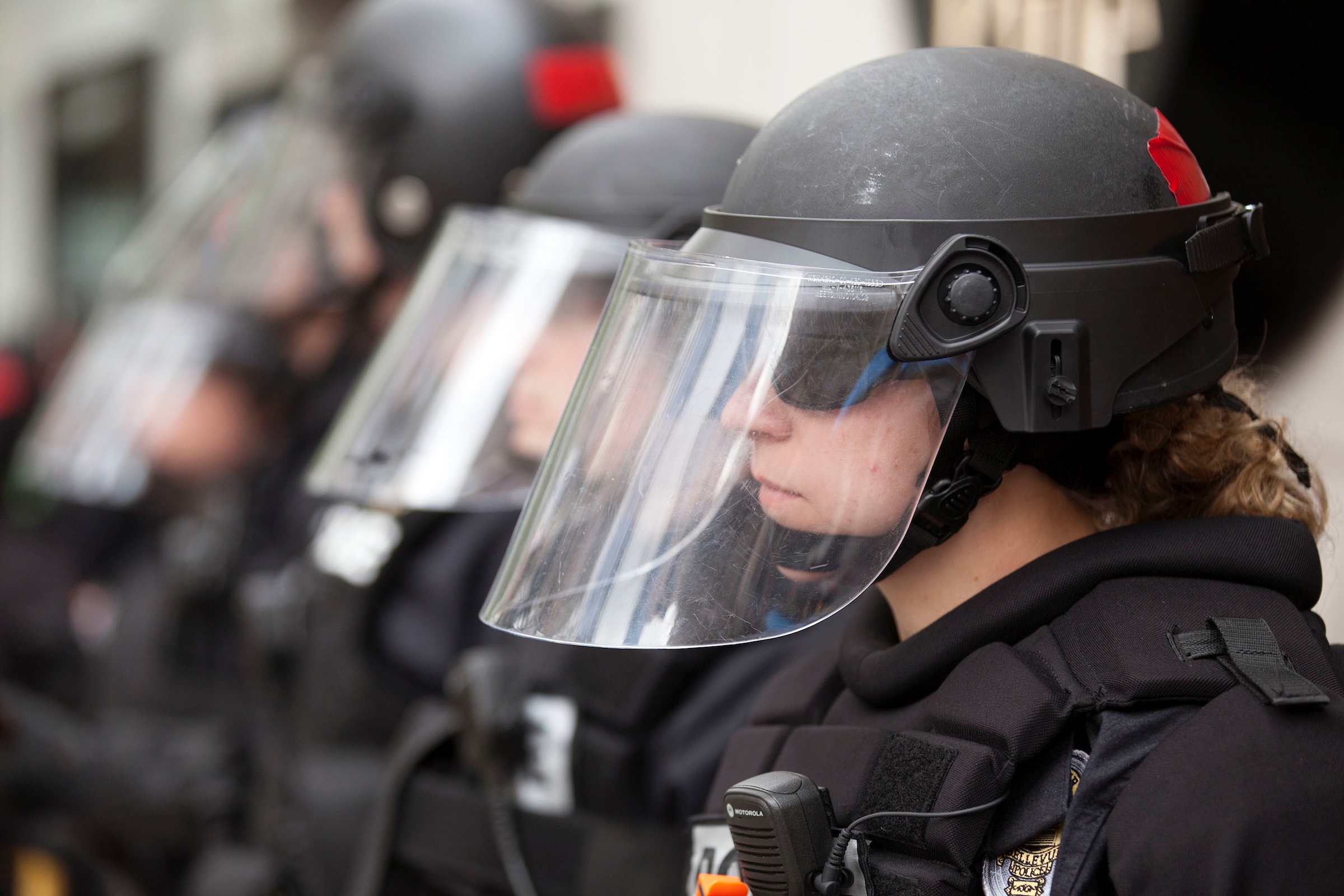 Seattle police during May Day demonstrations in Seattle on Monday, May 1, 2017. (Matt M. McKnight/Crosscut)

Facing the prospect that the city’s tentative agreement with Seattle’s largest police union could fall apart amid community blowback, boosters of the contract went on the offensive Friday, launching a last-minute stump campaign on its behalf.

And, the King County Labor Council held a press conference on the steps of City Hall Friday urging city council members to give it the thumbs up.

“It’s time for supporters of police reform to back off and allow workers to have their raise,” Labor Council head Nicole Grant said in an interview Friday.

The lobbying effort belies the confidence that mayor showed earlier in the week when she first made the contract public and forwarded it to the city council for ratification. When asked at the time whether she had any concerns about the council approving the agreement, she answered, “No.”

Now, the tone has turned from celebratory to concerned. “We need to have this contract go through,” Chief Best, in just her second month as the department’s permanent boss, told KTTH’s Jason Rantz Friday morning. “We are not going to be able to provide effective public safety in my opinion unless we fairly compensate the officers. Too many officers will leave.”

The Community Police Commission’s pushback has not centered on pay, but on oversight and disciplinary provisions.

As Mayor Durkan did earlier in the week, Chief Best continues to argue that the contract is not a giveaway on reform. “Nothing about any of the negotiations sets us back on reform in any way,” she told Rantz.

The negotiations over this contract have stretched to three-and-a-half years. The city and the rank-and-file union struck a tentative agreement in July 2016, but the officers roundly rejected it and it never made it to City Hall for consideration.

As a result of the delay, officers have not seen a pay increase since 2014, even as the cost of living in King County has skyrocketed.

In recent months, department leadership has been warning the city council that the lack of a contract has hurt their ability to attract new recruits. Recent numbers seem to bear this out. In a Thursday briefing to the city council, city officials estimated the department will shrink by 33 officers by the end of 2018 — the result of attrition outpacing hiring. This comes despite pledges from Mayor Durkan and a predecessor, Ed Murray, to grow the department by at least 200 officers.

Noting this, CPC commissioners said they recommended against the contract with regret. But they felt it ceded too much ground on the police accountability legislation passed by the city council over a year ago and which they helped write.

“It’s unclear why we did this work, honestly,” said commissioner Lisa Daugaard Wednesday.

Although the commission’s recommendation was only advisory, it sets up a politically untenable scenario for city political leaders. Turning down the contract would be a shock that could lead to a wholesale restart of the negotiations, with enormous implications for everything from pay to recruitment to use of body cameras to civilian oversight. Additionally, the police union would likely file an unfair labor practice complaint.

But accepting the contract despite the CPC’s “no” recommendation would almost certainly be viewed as a surrender to the police union and a walkback of the significant steps made in the council’s accountability legislation, which was hailed as “historic” when it passed last year.

And unlike most legislation, the council must pass the contract with a super-majority of votes, or seven of nine council members.

The labor council's Grant said she was still confident it could pass. But that’s not a guarantee. In a text message, Councilmember Lisa Herbold said she’s receiving dual briefings from the CPC and the mayor’s office on Friday. “I’ve got an open mind until I hear more,” she said. She said she was also interested to hear what the federal judge overseeing the city’s police reform agreement with the Department of Justice had to say. The judge has not yet called a hearing, but he’s likely to do so.

Councilmember Lorena González, who took the lead on the 2017 legislation, said in a budget meeting Thursday that she wanted the director of the department’s Office of Police Accountability and the new civilian Inspector General to comment on the agreement.

The Seattle Police Officers Guild holds a unique place in the city’s labor landscape. While the attention paid to teacher or construction contracts tends to focus on pay and benefits, a police contract has the added complexity of directing discipline, oversight and accountability — highly relevant areas of scrutiny, especially in the post-Ferguson era.

SPOG only recently became a member of the King County Labor Council and is now benefitting from that body’s advocacy. “There is a serious hostility towards unions and police reforms and the Seattle police officers, and I don’t think it’s right,” said Grant. “Unionism is a progressive force in our society.”

For their part, the CPC has largely avoided criticizing SPOG, instead focusing on the mayor’s bargaining team. “I cannot blame a labor union for advocating on behalf of their own membership,” said CPC co-chair Enrique Gonzalez on Wednesday. “But it’s also the mayor’s job to advocate for legislation the city council has passed,” referring to the 2017 accountability ordinance.

In an email, spokesperson for the mayor Mark Prentice said, “Mayor Durkan and Chief Best are committed to talking with community members about why the Tentative Agreement is critical to meeting the public safety needs of every neighborhood and community in Seattle and continuing the important job of reform, while helping ensure Seattle can hire and retain the best police officers. They are equally committed to ensuring that community members understand that failure to enact the contract jeopardizes both public safety and reform.”

The council vote could come as early as Oct. 29.