An attempt to curb polluters has a better chance than past efforts, despite big-money foes. 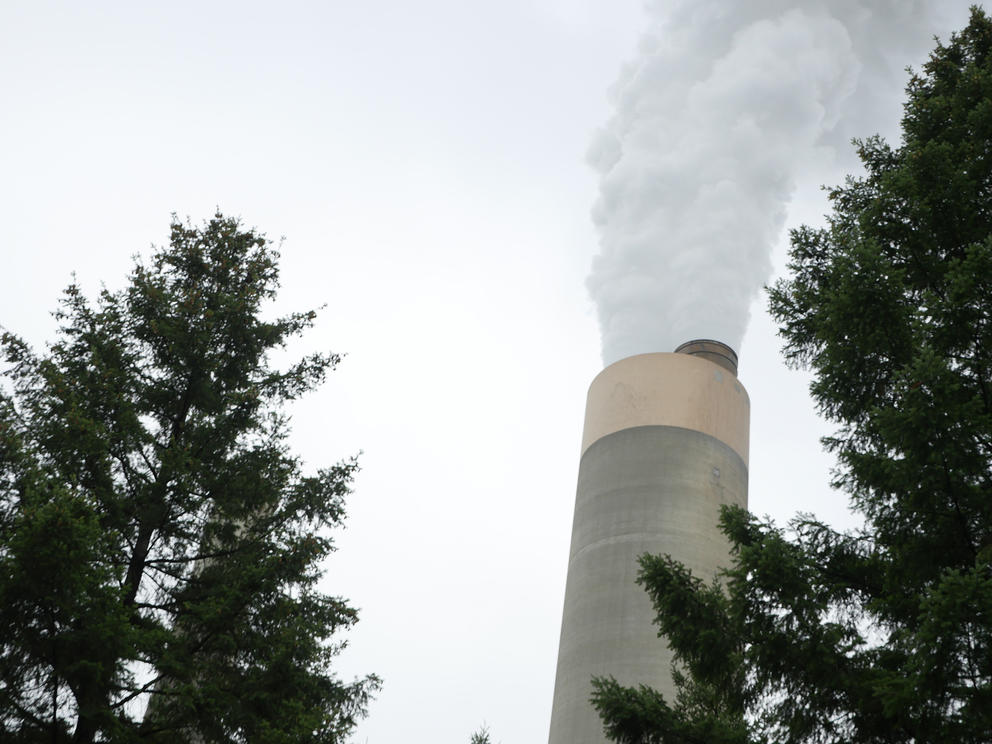 A smokestack from the TransAlta coal-fired plant in Centralia, Washington. The plant has been the subject of controversy for critics of Initiative 1631 who say it shouldn’t be exempt from the carbon fee while proponents point toward its fast-approaching closure in 2025 as a reason why. (Photo by Manola Secaira/Crosscut)

Washington voters have long grappled with the idea of taxing carbon polluters. But new data indicates that support may have finally reached a tipping point: A recent statewide Crosscut/Elway Poll shows that Initiative 1631, which would charge a fee to some Washington carbon emitters, could succeed where past efforts have failed.

The poll, which was conducted from Oct. 5-9, found 50 percent approval among the 400 registered voters polled. Thirty-six percent said that they were against the initiative, while 14 percent were undecided. The poll has a margin of error of 5 points.

Support for the initiative is greater than what I-732, a similar carbon initiative, was receiving at this point two years ago. Unlike the current carbon fee initiative, that 2016 ballot measure had been criticized by many left-leaning groups and communities of color, managing only 40 percent support in that October’s Elway poll. In the run-up to the 2016 election, Stuart Elway, the president of Elway Research, told the Seattle Times that any measure polling with less than 50 percent in October is likely to fail. He was right: The measure ended up receiving 41 percent of the vote with all ballots counted.

The current initiative is positioned for a more favorable result, but its passage is far from certain. Elway says that ballot initiatives tend to poll favorably in the months preceding a vote only to decline in support as the election date draws near. It’s not a hard-and-fast rule, but Elway says that of the 90 initiatives he has polled in the past four decades, two-thirds lost ground from summer to election time. At 50 percent, it’s hard to guess precisely what will happen with the carbon fee between now and Nov. 6.

“It’s doing better than the last one,” Elway said. “But if you’re at 50 percent and there’s still a month to run before the election, there’s a lot of time for things to change. It’s on the cusp.”

Tens of millions of dollars are being spent to effect that change. And as has been the case for past efforts to curtail carbon, an opposition of business groups and oil industry leaders is outspending proponents in an attempt to erode support. The No On 1631 campaign, sponsored by the Western States Petroleum Association, has received over $20 million in funding from seven individual donors, while the Yes On 1631 group has collected around $8 million from nearly 2,000 donors.

The impact of that money can be seen in places like Hulu and Twitter, where the campaign is running ads that claim the initiative would raise gasoline prices and negatively affect small businesses and families while letting larger emitters, such as the TransAlta power plant in Centralia, remain unaffected. Those ads are based on the findings of NERA, an economic consulting firm commissioned by the campaign to study the initiative — No On 1631 spokesperson Dana Bieber maintains that the campaign was not involved in conducting the study.

The ads are likely to resonate with voters like Blaine Rutledge, a Republican in Auburn who took part in the poll. He told Crosscut that he will be voting against the measure due to concerns that the fee would cost his family.

“At this point, it’s just about money,” he said. “We’re a family of five with three vehicles and another driver four months away.”

Yes On 1631 is quick to counter the claims from the opposition. Communications Director Nick Abraham’s rebuttal to the NERA study’s claims is two-pronged. First, he says, the study comes from “an incredibly discredited source,” noting that NERA has previously produced research downplaying the health effects of smoking and inflated the cost of Clean Power Plan programs. Regarding the TransAlta plant, he explains the initiative intentionally avoided targeting it since it will close by 2025.

Abraham said that during the carbon fee campaign’s early internal polling, they saw support for the initiative within both political parties. Since No On 1631 kicked off their campaign, Abraham says they’ve seen the emergence of a partisan divide.

“They’re trying to make this about government overreach,” Abraham says, adding that the No On 1631 campaign has been targeted towards conservative voters. “They’re really trying to undermine our campaign.”

Meanwhile, supporters have rallied to ensure the initiative passes. In addition to broad support from clean energy advocates and communities of color — two contingents that largely did not support the 2016 initiative — the measure has received backing from the Nature Conservancy (its largest donor), the Washington State Labor Council and Microsoft co-founder Bill Gates.

Yoram Bauman, the founder of grassroots clean energy advocacy group Carbon Washington and an author of the 2016 initiative, says that big money — more than any increased public awareness about climate change — is responsible for the increase in support for the carbon fee.

“[Initiative] 732 was a pretty low-budget affair,” said Bauman, who characterizes the battle over the current initiative as a “money race.” He says the millions of dollars he’s seen in funding from both sides puts this initiative “into a different category.”

Beyond financial support, Abraham points to the carbon fee’s concerted effort to bring in diverse communities during the initiative’s early formation — from tribal nations to low-income advocates to environmental groups — as an asset in rounding up votes as well.

“Young people overwhelmingly support this, folks that are the most affected by pollution are the ones supporting this,” Abraham says.

According to interviews conducted by Crosscut with polled voters, those in support agreed that a fee would hurt a little financially. Still, they said that these sacrifices would help mitigate the effects of climate change in the long run.

“Until we start changing how we do things, we’re going to continue to have an environment that degrades,” Lea Conner said, a Democrat from Spokane. She volunteers with a variety of Spokane environmental groups and said she’s followed similar carbon initiatives for some time. She voted in favor of the 2016 carbon tax.

Darryl Holman, an independent voter and biological anthropologist from Redmond, said that he favored the carbon fee for similar reasons.

“I’m a scientist,” he said. “And I believe what the scientists tell me about global warming and what scientists say about carbon initiatives.”