Blue wave? Red tide? Purple reign? What to watch for in tonight’s election 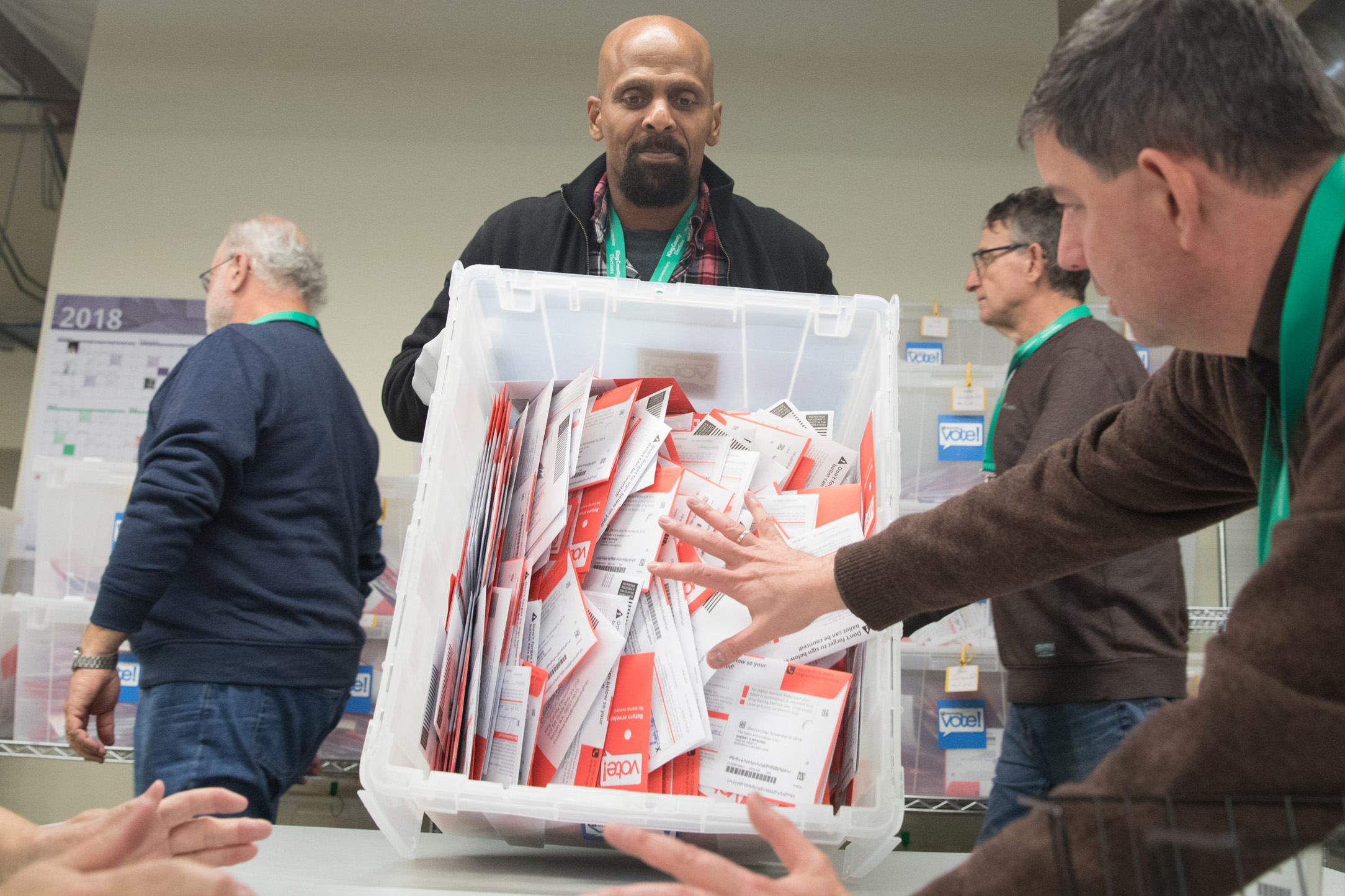 Experience has taught me that Election nights can offer surprises: The Bush vs. Gore debacle of 2000, the contested gubernatorial election of 2004 between Christine Gregoire and Dino Rossi, or the shock win of Donald Trump in 2016 come to mind. Or, memorably, the Gingrich “Revolution” of the 1994 midterms.

I remember being at the Municipal League’s election night headquarters in downtown Seattle that year. The Red Wave flipped most of Washington’s Congressional seats from Blue to Red, brought down the sitting Speaker of the House, Spokane’s Tom Foley, and saw the GOP surge nationally. It was a shock even to some Republican operatives. “We elected people and I don’t even know who they are!” one exclaimed to me in semi-inebriated joy.

Election night in Washington will bring results, but also some drawn-out suspense due to mail-in voting with ballots coming in after Election Day. Close state races might not be decided for weeks. So pace yourself.

Oh, and don’t forget that due to possible foreign tampering, voter suppression and other shenanigans, some key elections could be contested and litigated for months to come. Helpfully, Geekwire lists six ways the midterms could be hacked. Sigh.

For this election day I’ve asked some seasoned election-watchers what they’ll be looking for in terms of races, trends and ballot measures. Here’s the break down.

Trend watching: “The story this year has been about the blue wave,” says Stuart Elway, the pollster who conducts our Crosscut/Elway Poll. “If there is one, it should be easy to spot. If it’s not obvious, it’s not a wave.” Other possibilities include a Red Tide, a Purple Reign — or simply a normal midterm with moderate gains for the party out of power in Washington, D.C. (the Democrats).

Ben Anderstone, political consultant and regular Crosscut contributor, says “I’ll be watching state congressional and legislative races [taking place on] the East Coast.” This is where the Blue Wave will or won’t materialize. This could have strong local consequences: “All politics may be local, but this year, the national is effecting the local quite a bit.” Trump, for example, has tried to make the election a referendum on his policies, while the Democrats have used the issue of healthcare. “If the wave starting on the East Coast is formidable … that’s going to be a strong indicator that the local GOP is likely to be swept under.”

Anderstone says he’s also paying attention to voter turnout. “So far, ballot returns are closer to Presidential [year] levels than midterm levels. Even if that ebbs a bit, we’re on track for an incredible showing.”

National indicators: KVI radio host and Crosscut columnist John Carlson has specific races where he’ll be reading the election tea leaves. “Keep your eye on Florida and Tennessee,” he advises. “If [Democrat Andrew] Gillium beats [Republican Ron] DeSantis for [Florida] governor,  Democrat Bill Nelson keeps his [Florida senate] seat from [the GOP’s] Rick Scott and [former governor Phil] Bredesen, the last Democrat elected statewide in Tennessee, takes Bob Corker’s open senate seat by defeating Marsha Blackburn — it will be a good night for the Dems across the country. Ditto for R’s if those races go the other way.” He suggests also looking at states with incumbent Democrats where Trump won handily, like West Virginia, Indiana and Missouri.

Northwest neighbors: You don’t need to look so far east for telling races. The states around us have interesting face-offs worth tracking on election night as well. Will Democrat John Tester keep his senate seat in deep-red Montana? The governors’ race in Oregon between incumbent Democrat Kate Brown and Republican challenger Knute Buehler (great first name!) has been unexpectedly tight and has been rated a toss-up. In Idaho, Democrat Paulette Jordan is making a bid to be the state’s first woman, first Native American governor in her race against Republican Brad Little. Up in Alaska, the state’s Independent Gov. Bill Walker suddenly dropped out of the race to back Democrat Mark Begich against Republican hopeful Mike Dunleavy, who was leading in the three-way race. That has created what Politico calls “the least predictable campaign in the country.”

Washington congressional races: While all the state’s Democratic congressional seats are generally thought to be safe for the incumbents, there are three seats with a chance of swinging from GOP to Democrat. All solid GOP districts in any other election, these three — the 3rd, the 5th and the 8th — are being monitored nationally and a shift in any of them could help Democrats take control of the U.S. House of Representatives.

The one getting the most attention is the open seat in the 8th, which runs from suburban Issaquah and parts of Pierce County and across the Cascades to Chelan. The race between Republican Dino Rossi and Democrat Kim Schrier has been one of the most expensive congressional races ever (spending has surpassed $25 million). Cook Political Reports rates the longtime GOP district as leaning toward Schrier.

The 5th District in eastern Washington pits the Trump-endorsed Republican incumbent Cathy McMorris Rodgers against challenger Democrat Lisa Brown. This will partly be a battle between urbanized Eastern Washington and the rural parts of the district in the northeast corner of the state. Elway says look to the vote in Whitman County to see how university town Pullman is voting. “If Brown wins and it is close, it will likely be Pullman that provides the margin. That will give some indicator of whether young people are turning out.”

The 3rd District in southwest Washington features incumbent Republican Jaime Herrera Beutler against Democratic challenger Carolyn Long. Republicans I have talked to worry that this might be the most likely to flip of the three congressional districts. If it does, Clark County will like be the difference, says Elway.

There is one more congressional race to watch, says Seattle University professor Marco Lowe. He teaches a course in “Campaigns and Elections” and is intrigued by the Smith vs. Smith race in the urban 9th District, which stretches from Tacoma to Bellevue. Incumbent Democrat Adam Smith is being challenged by newcomer and former Bernie Sanders volunteer Sarah Smith, who is running to the incumbent’s left. Says Lowe, “I don’t expect a race like NY-14 [where Alexandria Ocasio Cortez beat a longtime Democratic incumbent in the primary], but given the actual diversity of the 9th, I am really curious how her message resonates. This is a microcosm for the Dems in general as they struggle to stay in tune with an increasingly economically fragile middle class and debt-laden college graduates.”

Washington state ballot measures: Ben Anderstone says, “Washington is getting a reputation as a test lab of democracy for (mostly left-leaning) causes nationally.” The carbon fee initiative, I-1631, has gained a lot of national attention as potentially the first statewide carbon tax, or fee, of its kind in the country. Big Oil is opposed. “Will one state go it alone to make polluters pay?” asks the New York Times. “The viability of climate change legislation is going to be fascinating,” Anderstone says.

Also of interest: Initiative 940, which seeks to change the standard by which police shootings are unjustified by eliminating the “malice” standard and requiring de-escalation training for law enforcement. Can voters play a direct role in police reform? And there’s I-634, which, if passed, would prevent cities from imposing new taxes on beverages and food. Lowe thinks voters might be confused by this one, where a “yes” vote is required to vote “no” on taxes.

Washington women: Crosscut’s digital editor Cambria Roth has been tracking the unprecedented number of women candidates in this election, especially in local races. “I think some of the smaller legislative district races can tell us a lot about Democrat enthusiasm that could spill into the bigger congressional races that represent more rural areas,” she observes. For example, “I’ll be watching [Democrat] Sasha Bentley’s race [for the state House] in the 14th Legislative District that has Skamania, Klickitat and parts of Clark and Yakima counties. It’s an area that always goes red, but Bentley won three of those four counties in the primary.”

Another race on Roth’s radar is Kathy Gillespie’s run for state representative in the 18th District near Vancouver. “She is running for the second time after losing by 14 percentage points in 2016. In the primary, she was winning the Republican district by 4 points. That’s a big deal because that district hasn’t elected a Democrat in 20 years.”

The Legislature: The Democrats are widely favored to pick up seats in Olympia. The question seems to be, “How many?” Will Washington throw up its own big blue wave? Stuart Elway advises looking at swing districts. “The first obvious place to watch for it is in the purple legislative districts in the state” that are represented in Olympia by both Republicans and Democrats. These are all in Western Washington: the 30th, 41st, 5th and 47th in King County, the 28th in Pierce, the 44th in Snohomish, the 35th and 19th in Mason, Grays Harbor and Pacific counties on the Olympic Peninsula.

Carlson sees gains of at least four seats for the Democrats in the state House where their current majority is a slim 50-48. This would make a tremendous difference, because then “[House Speaker Frank] Chopp can let some members off ‘tough’ votes with that kind of cushion.” Margins make a difference.

He also points to senate races that he believes are key indicator. “Doug Erickson in north Whatcom County’s 42nd District and Mark Miloscia in Federal Way’s 30th are Republican incumbents struggling to keep their jobs. Marty McClendon is the Republican running for retiring Jan Angel’s seat in Gig Harbor’s 26th.” If any of these races are lost, it’ll be a big boost for state Senate Democrats, Carlson says.

Another senate race of interest is in the 47th District (Auburn, Kent) where incumbent Republican state Sen. Joe Fain is facing Democratic challenger Mona Das. Fain is under the shadow of a rape allegation by Candace Faber, which he denies. Roth says she’s really interested in how this race turns out. Carlson says Fain was headed for an “easy re-election until he was accused of sexual assault. I don’t know how much damage it did. We’ll find out Tuesday.”

By any measure, this midterm is likely to be a major course-setting election. We’ll find out a lot this Tuesday about the state of the state and the nation.