With a revival of Tony Kushner’s A Bright Room Called Day, The Williams Project raises questions about evil and the responsibility of citizenship. 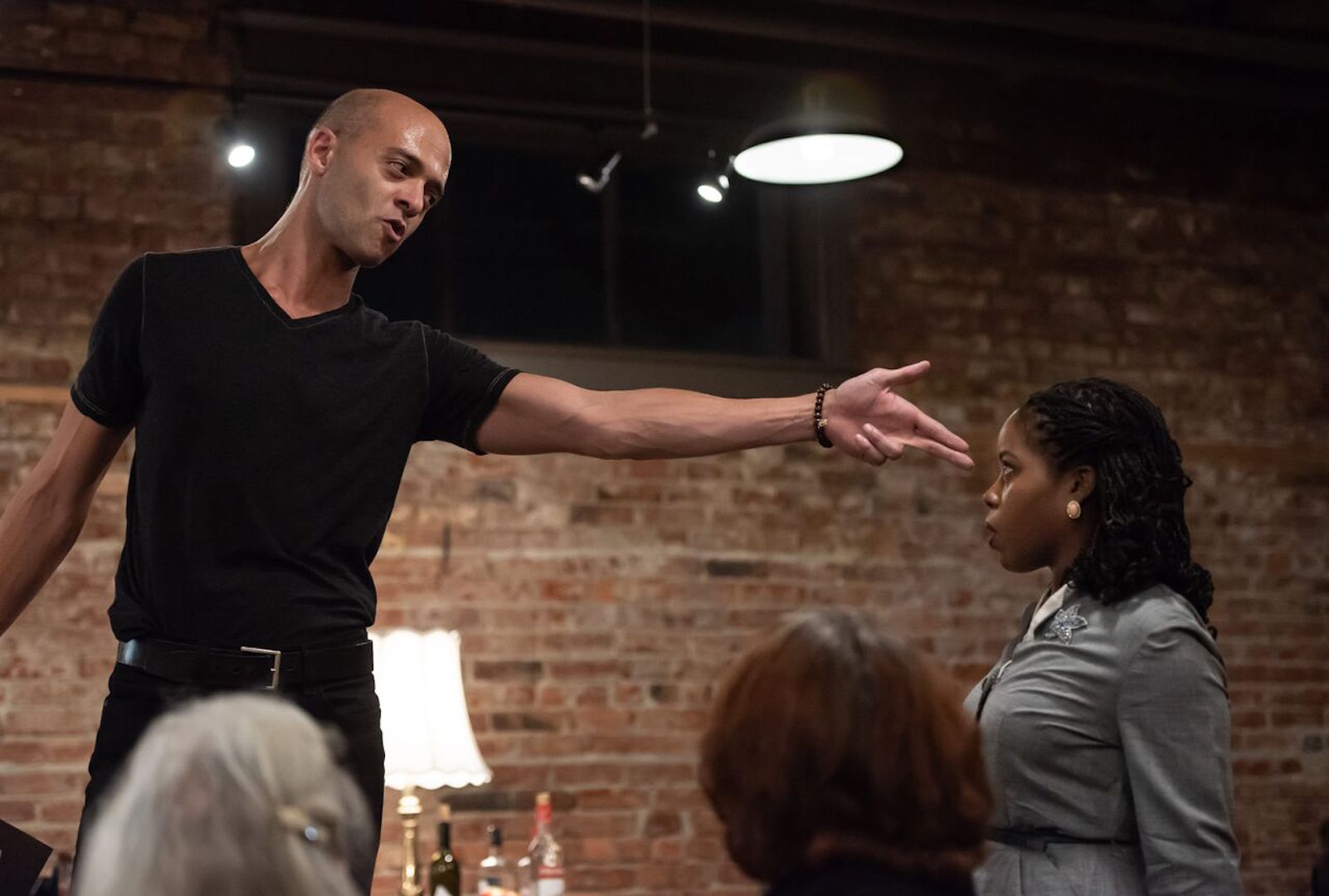 Actors Brandon J. Simmons and Claudine Mboligikpelani Nako in The Williams Project’s staging of “A Bright Room Called Day,” a densely polemical play about the rise of fascism in Germany by Tony Kushner. (Photo Courtesy of Marcia Davis/The Williams Project)

One faltering part of democracy should not threaten the whole thing. If a demagogic president oversteps his bounds, the courts can correct him. If the courts devolve into corruption, the press can expose them. If Congress fails its citizens, they can vote the bastards out.

But democracy is a fragile machine. A terrifying recent essay by Christopher R. Browning in the New York Review of Books sheds light on this precarious predicament by drawing parallels between the fall of the Weimar Republic and the rise of Trumpism. The historian does not mean to suggest we are headed for a Nazi dictatorship, but we are, he insists, in trouble.

In Browning’s telling, Donald Trump risks creating the kind of “international anarchy” that produced two world wars, the Great Depression and the Holocaust. The President mocks the peacekeeping arrangements that emerged after World War II. He admires dictators. He threatens trade wars. He spews racism. And, Browning says, he aligns himself with the aims of the “so-called alt-right for the unfettered self-assertion of autonomous, xenophobic nation states — in short, the pre-1914 international system.”

One of the evil puppeteers in this story is Mitch McConnell, who Browning calls the “gravedigger of American democracy.” The historian compares him to the German president Paul Von Hindenburg. After appointing Adolf Hitler as chancellor, Hindenburg believed that he and other conservatives could control him while still “enjoying the benefits of his popular support.”

“Like Hitler’s conservative allies,” writes Browning, “McConnell and the Republicans have prided themselves on the early returns on their investment in Trump.”

For Browning, McConnell’s most damaging blow to American liberalism is his efforts to politicize the judicial nomination process. His move to block Barack Obama’s Supreme Court pick Merrick Garland hastened the “obliteration of traditional precedents concerning judicial appointments.” And now, with the elevation of Brett Kavanaugh to the U.S. Supreme Court, the vicious cycle comes full circle. The recent blockbuster hearings embody the “extreme politicization” of the judiciary, and Kavanaugh’s position on the bench could threaten such progressive achievements as affirmative action and abortion rights.

All of this, he says, is playing out against a fraught backdrop. A litany of Trumpian outrages, including the separation of families at the U.S. border, rages on. The cultural landscape is beset with racial division. Inequality remains a canyon dividing the wealthy few from everyone else. And the world is still dangerously warming.

With a revival of Tony Kushner’s densely polemical play A Bright Room Called Day, The Williams Project is acknowledging this dire situation. In staging Bright Room, the ambitious artistic team is cautioning vigilance and calling for action against creeping authoritarianism.

The 1985 play traces the decimation of democracy in 1930s Germany, juxtaposing that historical horror show with the retreat of liberalism in 1980s America when Ronald Reagan stood idly as the AIDS crisis claimed more than 5,000 lives before he publicly acknowledged the epidemic.

In this production, director Ryan Guzzo Purcell makes confident aesthetic nods to Trump and our current era of illiberal politics.

The narrative unfolds in a cheap and cozy Berlin apartment. A group of friends — mostly artists and communists with varying degrees of commitment to the Red cause — drink, debate, fret over and exalt the direction of the Republic. In the first act, it is New Year’s Eve; optimism swells in the room. Agnes, a minor German actor, flirts with joining the Communists. She wants to feel useful, so she volunteers to write an agitprop skit for the party.

But politics for Agnes doesn’t come naturally. Her filmmaker lover Husz and friends Annabella and Baz, respectively a middle-class painter and gay anarchist, encourage Agnes to get more involved. But another friend, Paulinka, a more prominent actress and former card-carrying communist, is skeptical.

Frequently interrupting the drama is a concerned and paranoid American leftist named Zillah. Her presence — and the blistering letters she writes to Reagan, excoriating him — draws overt connections between 1930s Germany and 1980s America. At one point she says, “Reagan equals Hitler! Resist! Don’t forget, Weimar had a constitution, too!”

The crosscutting between the two eras raises more questions than it attempts to answer. Zillah grapples with what to do in the face of evil that may not rise to the horror of the Holocaust. In one monologue, she asks, “I mean how much of a Nazi do you have to be to qualify for membership? Is a twenty-five percent Nazi a Nazi or not?” She leaves the audience with this thought: However you divide the world’s evils, “the borders are full of holes.”

Prone to drinking and high-minded pontificating, the friends weigh in on moral questions about the state of the Republic as it falls to fascism. In one memorable exchange, the painter Annabella implores Agnes, wallowing in angst over the crumbling nation, to “stop feeling” and “think!” Taking action, she seems to say, is more useful than self-pity.

But the play prescribes no clear answers for the concerned and anxious citizen of our time. And this is part of Kushner’s power and Purcell’s channeling of it. Neither attempts to simplify the monumental questions of citizenship: How will we exercise our responsibility to one another? How do we choose whether to act or retreat? Who is the least protected among us?

Kushner, a master of lyricism who wrote the seminal theatrical work on the American AIDS crisis, Angels in America, is also a capable political theorist. His characters deliver penetrating arguments about justice, morality, evil and the role of the artist in society — a thrilling range to behold. But the overly poetic language can be distracting, making it hard to retain the central dramatic throughline of the play: Hitler is rising and the camps will soon be constructed.

At the Hillman City Collaboratory last week, I could feel my anxiety rising and falling as I tried to realign my focus, a sensation not unlike the act of interpreting the Trump-soaked headlines of the day. The difference of course — and what makes the real-life anxiety all the more acute — is we don’t know how this story will end.

Kushner wrote Bright Day in the mid-’80s. Then, nobody thought it was relevant, said director Purcell, in a recent interview. “That there was something in Reagan that foreshadowed [the decline of liberalism] was not at all well accepted.” But Kushner, a gay man watching the government disregard AIDS, discerned something troubling in the Reagan administration’s backwards moralism, “this idea that only certain people deserve to be taken care of because only certain people are good,” as Purcell puts it.

Bright Day was Kushner’s warning flare to this country. “We went from that can never happen to it’s right on top of us so quickly,” said the director. But “part of what the play is saying is that it wasn’t that quickly, it’s just that we were ignoring a lot of things that caused it.”

In his version, Purcell has not shied away from embellishing the Kushner original with reminders of America’s rightward lurch. Zillah, an activist living through the 1980s, projects on a screen various dates and events from the Nazis’ rise in the early ’30s. Interspersed with these announcements are an array of contemporary images, including photographs of the Northwest Detention Center, two Immigration and Customs Enforcement officers arresting a man, the white nationalist rally in Charlottesville and a triptych featuring Donald Trump, Mitch McConnell and Brett Kavanaugh.

For a brief moment, the friends are hopeful that Germany is heading to the left. A midterm-like election has fascists losing seats. Drunken celebration ensues. But jubilee soon turns to panic when it becomes clear that the election is just a minor bump in Hitler’s ominous march toward power. Anxiety, and then a kind of depressed withdrawal, falls over the friends. Agnes weighs whether to flee Germany with the others or to cling to the comfortable confines of her rent-controlled apartment.

In the U.S., Browning argues that the stage has been set for continued degradation of many of the “rights and protections Americans now enjoy.” More and more observers are starting to note the alliance between Trump and a fascistic element of the political right emerging in parts of the country. Arresting and reversing the slow dismantling of America’s liberal project — a process Browning argues is aided by gerrymandering, voter suppression, the distortion of our electoral process by dark money, the decline of labor unions and the precarious position of the free press — is our urgent and pressing task.

Bright Day takes a different disintegration of liberalism, from a different era, and refracts its complexities, uncertainties and anxieties through the feverish conversations of a group of bohemian friends. It is cause for a Seattle audience to ponder the nature of evil and its uneven historical continuity. It is a warning sign and a call to action. So let us ponder, and then let us act.

A Bright Room Called Day runs until Nov. 18 at The Hillman City Collaboratory. Make arrangements for the show here.