Found at a Seattle estate sale, these Mexican artifacts are going home

The artifacts were accidentally uncovered by a University of Washington grad student. 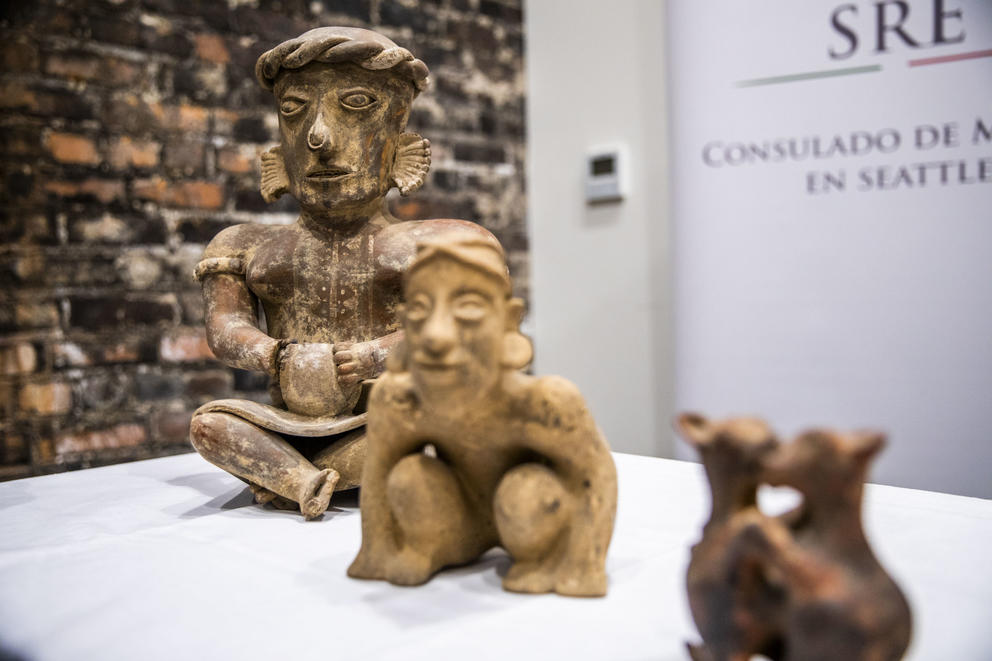 Mexican artifacts that will be repatriated, shown at the Mexican Consulate in Seattle on Tuesday, Nov. 20, 2018. (Photo by Dorothy Edwards/Crosscut)

It started with an online listing for a Capitol Hill estate sale last year. Scrolling through estatesales.net in search of furniture, Caitlin Mosher spotted something unusual: more than one dozen figures that looked a lot like pre-Hispanic Mexican artifacts — items dating back to between 300 B.C.E and 600 C.E.

Serendipitously, Mosher, then a University of Washington graduate student who had been studying museology, had visited Guadalajara the year before. When she saw photos of the clay figurines, she recognized their historical value.

She had learned that these types of artifacts specifically were vulnerable to theft and illicit trafficking having seen the International Council of Museum’s “Red Lists” Database, a catalog of at-risk cultural goods.

“My first thought [was] to call the cops,” Mosher said.

So she called 911. The Seattle Police Department, not knowing what to do with her claim, told her to contact the Department of Justice. She did, and DOJ forwarded her claim to Interpol, which redirected her back to Seattle police. The runaround was to be expected — such calls aren’t an everyday occurrence.

Now, eight of the pieces recovered from the estate sale are being returned to Mexico, marking the first time the Mexican Consulate in Seattle has repatriated artifacts. Anthropology experts have verified the origins of eight of the 17 pieces Mosher saw in the list: they’re of Nayarit, Jalisco or Colima origins.

The items will “go back to Mexico to be part of the historical preservation efforts done by the country,” explained Mexican Consul Roberto Dondisch on Tuesday at a Seattle Police Department press conference at the consulate. “By both national and international law, [the artifacts] should never have been able to leave Mexico.”

Repatriation typically involves the return of objects with cultural significance to their original owners or country, like in the case of looted or stolen art. In this case, Dondisch said the items were being returned in alignment with provisions made in the Treaty of Cooperation between Mexico and the United States and on the basis of the Federal Law on Archaeological, Artistic and Historic Monuments and Areas.

Luis Mingo, the Mexican Consulate’s head of political, economic and academic affairs, said artifacts are typically obtained when tourists “go hunting for different objects. They find people who are selling these kinds of things and buy them.”

The phenomenon has led to legislation that helps Mexico recover artifacts wrongfully bought and details how to package them for repatriation, Mingo said.

On Tuesday, Mosher explained how she picked up the artifacts from the sale with a police officer and cataloged them, taking notes on their condition and sending the information to Mexico’s National Institute of Anthropology and History.

She was happy that the items were being repatriated.

In an interview on Friday, Tracy Clayton, a strategic adviser for the SPD, said the estate sale was being managed by Donnelly & Donnelly. No one is being charged with a crime but it’s “still kind of curious as to how these, in fact, got into their possession,” Clayton said.

Reached later on Friday, Cathie Tomlinson, owner of Donnelly & Donnelly, told Crosscut that she had no idea the items had been wrongfully obtained.

“We were flabbergasted when the Seattle Police Department showed up on the morning of the sale,” she said.

She said the woman who was selling the artifacts had probably purchased them prior to 1970; she used to visit Mexico often. Tomlinson would not disclose the seller’s name.

Tomlinson had consulted with a collector who had participated in archeological digs and agreed the items had value. From what she can recall, the most expensive item was on sale for around $990.

She said the SPD also removed five or six African items that were included in the estate sale, although officers returned them the next day.

It took almost a year to move the artifacts through “legal limbo” and return them to their rightful owner, which in this case, is Mexico, police said.

Last year, a Chilkat robe was returned to the Sealaska Heritage Institute in Juneau, Alaska. A teen had raised questions about the item hanging in her home. The item had been purchased by her father from an art gallery in Pioneer Square. It turned out to be a robe woven by the Tlingit, Haida and Tsimshian peoples of Alaska and British Columbia, dating back to about 1900.

Editor’s note: This story has been updated to include more information about the investigation from Seattle police and Donnelly & Donnelly, which oversaw the estate sale.