A grassroots group has a plan to make sidewalk-less streets safer for walking. The city might make it official. 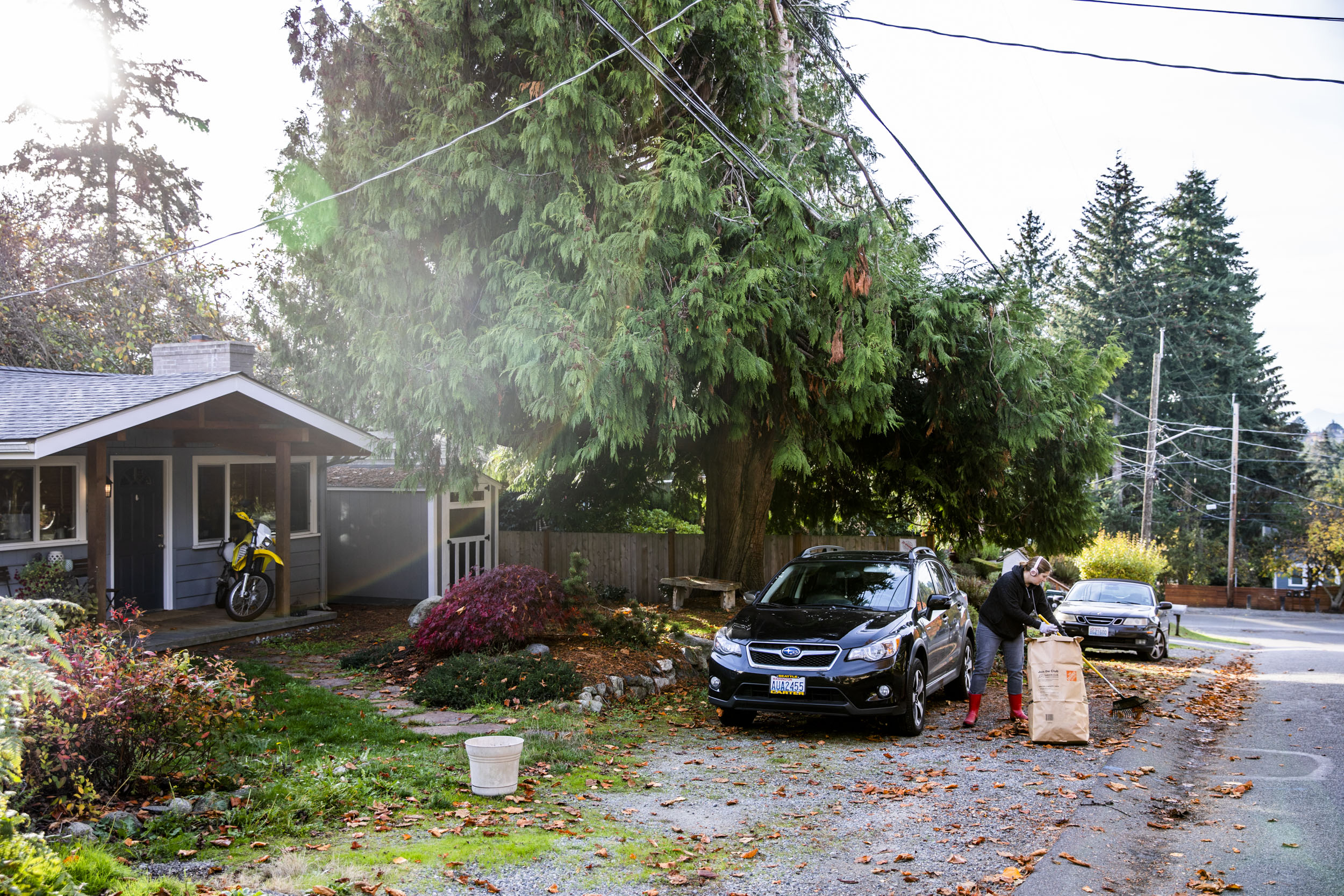 A woman rakes leaves in front of her home in Licton Springs, where there are no sidewalks, on Monday, Nov. 12, 2018. (Photo by Dorothy Edwards/Crosscut)

In 1954, Seattle annexed 10 square miles of unincorporated King County, bumping the northern border of the city from 85th Street to 145th Street. With it came neighborhoods such as Crown Hill, Bitter Lake and Maple Leaf, Carkeek Park and the Jackson Park Golf Course and almost 41,000 new residents. The annexation did not come with many sidewalks, however, as King County lacked the same sort of sidewalk development requirements that Seattle did.

Roughly 26 percent of Seattle streets have no dedicated place for pedestrians to walk – that’s some 45,000 blocks. Most of those blocks are concentrated in north Seattle, but with a fair number at the southern edge of the city as well.

The Seattle Department of Transportation (SDOT) is slowly remedying the problem. Ever so slowly. The cost of building new concrete sidewalk is about $350,000 to $800,000 per block, which means that the city can afford to build only 25 blocks’ worth per year. At that rate, it will take 1,800 years before all of Seattle has sidewalks.

Waiting until the year 3818 for every Seattleite to be guaranteed a safe place to walk in their neighborhood is not acceptable to the safe streets advocates at nonprofit Seattle Neighborhood Greenways. The group has been piloting a DIY project to make sidewalkless streets safer and more appealing to walk. The key? Slowing down car traffic. The Greenways group has done early planning and installed signage in its pilot zone. The Seattle City Council has proposed adding $350,000 to the city budget, so that SDOT can make the group's Home Zone experiment an official city pilot project.

“We asked how we can do things more efficiently to make things more walkable in Seattle sooner,” says Gordon Padelford, executive director of Seattle Neighborhood Greenways. “We want people to feel comfortable walking in the road space while we’re waiting for sidewalks, however long it will be.”

Funded by a grant from the AARP, the Greenways group organized neighborhood meetings in north Seattle. About 60 residents came out to discuss goals and ways of bringing them to fruition. The group also got a neighborhood matching grant to study where to put traffic-calming infrastructure.

The plan is twofold. First, the organizers aim to build speed bumps on neighborhood streets that will encourage anyone interested in maintaining the integrity of their car’s suspension system to slow down. Second, they will create pinch points in some places where the road narrows enough that only one car can pass through at a time. The aim is to make residential streets less practical for through-travel, encouraging drivers to use mostly main arterials — all the more important in this era of navigation apps sending traffic to neighborhood streets. In addition, there will be “wayfinding” signage that encourages walking by pointing out the direction and distance to neighborhood destinations such as parks, libraries and schools. “People often don’t realize how short a walk it is to library or park or school. Wayfinding helps nudge them,” says Padelford.

The Home Zones will also include public art, such as paintings on the street in the middle of intersections done by neighborhood people. “There’s not a direct correlation between art and safety," Padelford says, "but the more people know neighbors and feel comfortable on streets, the more likely they are to walk around.”

For its pilot, Seattle Neighborhood Greenways has been working with residents in the Licton Springs neighborhood, north of Green Lake, where it has installed a wayfinding sign and drawn up plans for traffic-calming measures. They’ve applied for a permit from the city to experiment with pinch points on one street. Padelford says Licton Springs was an ideal candidate because it has a small area of residential streets without sidewalks, which are bordered by arterials. In addition, he says Licton Springs neighbors were game to participate after unsuccessfully lobbying the city to build speed bumps to slow down traffic.

Padelford says Home Zones would be a win-win for the city. By making it safe enough to walk on neighborhood streets that don't have sidewalks, SDOT would be free to focus its limited sidewalk construction budget on higher-speed, higher-traffic arterials, which are much more dangerous for pedestrians. SDOT agrees.

“There is no city policy stating that traffic calming can take the place of sidewalks,” says SDOT spokesperson Dawn Schellenberg. But, “on streets with very low speeds, sidewalks might not be necessary to achieve a high level of pedestrian comfort. Many European cities have had success creating comfortable shared streets.”

The department already has been experimenting with some lower-cost alternatives to full concrete sidewalks on non-arterial streets. They include painted pathways with plastic posts delineating pedestrian space from traffic and stamped asphalt walkways raised slightly off the street. Traditional concrete “curb and gutter” sidewalks are expensive because they require stormwater drainage, curb cuts to comply with the Americans with Disability Act’s accessibility requirements, regrading and other engineering elements.

If the city council approves the proposed $350,000 budget line item, SDOT will develop its own pilot in 2019, separate from the one currently underway in Licton Springs. The department would build on the ideas developed by Seattle Neighborhood Greenways, but would have its own criteria and priorities.

Councilmember Rob Johnson sees the Home Zone pilot as right in line with past street-calming efforts in Seattle that also grew from the grassroots. “The city has a great history of taking tactical urbanist ideas and turning them into permanent policy,” he says pointing to the parklet program launched in 2013. It grew out of Park(ing) Day and the Play Streets program that kicked off in 2014 and allows neighbors to get permits to close off their street to cars for block parties.

“[I am a] big believer that we need [to] build out ADA accessible sidewalks that filter out bad chemicals in stormwater,” says Johnson. “But those things are big cost drivers. The Home Zone program could allow us to manage our streets more safely and more efficiently.”

The city council will vote Monday on its final budget package. Johnson is confident the Home Zone pilot funding proposal will pass. From there, it will be SDOT’s job to create an implementation plan to make Home Zone a reality in 2019. “Just allocating the dollars doesn’t necessarily mean they’ll be spent. We need to see a really good implementation plan coming out of the department,” he says.

“As a council, we just really want to see the department focused on this kind of innovation,” he continues. “I’ve seen neighbors take over their street at least once a month, if not more, to do play streets. It’s healthy for the neighborhood and results in relationship building that’s good for neighborhood safety. Home Zone will allow that to happen, too.”