Reflections on The Seattle Weekly by its founder, David Brewster. 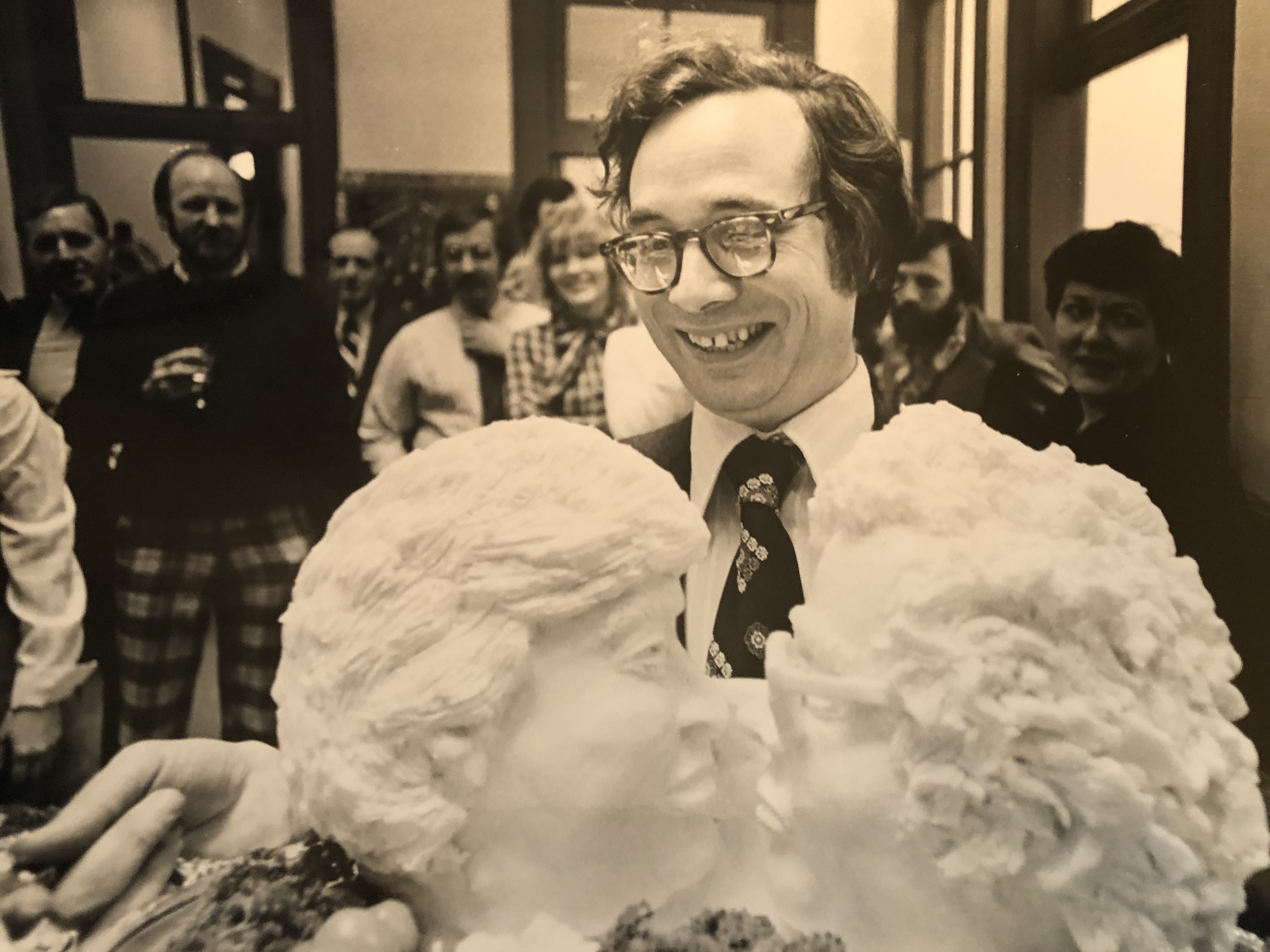 Seattle Weekly's first birthday, 1977. David Brewster poses with two cakes, one in the shape of Gov. Dixy Lee Ray and the other David's head. The Weekly was an early critic of the controversial governor and dubbed her "Madame Nuke" for her support of nuclear power. (Courtesy of David Brewster)

The announcement this week that the 43-year-old Seattle Weekly has published its last print edition felt like a long-expected death of a family member. I sought some comfort and perspective with my former boss and colleague, David Brewster.

Brewster was founder of the paper, which he ran until 1997. I was an editor there in one role or another for some 16 years. In 2006, he recruited me to write for Crosscut, which he also founded.

We met for lunch at the Virginia Inn, a longtime Weekly staff hangout, near Pike Place Market. Sitting at a small window table, it was comforting to see that though the Inn has changed owners, it has not changed inside. The menu was familiar and we sought comfort food: jambalaya for Brewster, steamed mussels for me. We relished, I think, a little stability in our environment since so much has changed in the city outside.

The loss of the Weekly wasn’t an occasion for sadness, but a prompt for more reflection by its founder. Launched in 1976 as The Weekly of Metropolitan Seattle, it was an urbanist enterprise from its inception. It grew out of a sophisticated editorial culture cultivated at KING-TV’s original Seattle Magazine, edited by a veteran of The New Yorker and Time-Lifer, Peter Bunzel. Brewster, an import from the East Coast, was a staff writer at the magazine until it folded in 1971. Under the stewardship of the broadcasting Bullitt family, it challenged local conventions and mores in a provincial town. It put a gay man and later Black Panther Aaron Dixon on the cover; it took on King County prosecutor Charles O. Carroll with reporting that shook up institutional racism and corruption.

But as a publication, it failed. Seattle advertisers were frightened and a hard sell. They avoided it in droves.

After it failed, Brewster tells me, he wanted to launch a publication with a better financial model that had a kind of evangelistic and iconoclastic energy for building a more sophisticated city. “I wanted to create an environment where writers were free to be themselves … where they could egg each other on” to be bold, he says. And as the mid-1970s approached, Seattle was enjoying a kind of urban renaissance. The Pike Place Market, saved by voters in 1971, preserved an ecosystem for low-income, downtown residents that also spurred high-rise development nearby. Pioneer Square was protected and being revitalized with new energy: restaurants, galleries, lofts and offices for urban professionals in what was still a mission district. It offered an urban edge that big cities had. Elliott Bay Books was born, so was Starbucks at the Market. Bumbershoot was launched. Gasworks Park opened, so too the Burke-Gilman Trail. The first Gay Pride Week was held.

The attitude, Brewster says, was, “Let’s make a real city here,” something more than chamber of commerce boosterism, misguided urban-renewal and the conservatism of downtown shopkeepers. Seattle had a long way to go, he says. Brewster was often chided for being an East Coast transplant with a Yale and professorial sensibility. But he wasn’t wrong about prodding Seattle.

The Weekly was conceived over lunches at the underground bistro, Brasserie Pittsbourg, in the basement of the Pioneer Building — a place on the vanguard of the city’s emerging restaurant scene. One of Brewster’s fellow plotters was Starbucks co-founder Gordon Bowker, who also had been a Seattle magazine staffer. Brewster wavered in taking the risk to launch a new newspaper. He was managing editor of The Argus, a downtown business paper for the establishment elite founded in 1894, and going out on his own was scary.

“Gordon finally told me that if you don’t do it, this is the last lunch I’ll ever have with you,” he remembers. Brewster found a major backer in Bagley Wright, a major arts patron. Wright wanted better arts criticism, wanted arts organizations to be pushed to improve, Brewster says. Wright loved hearing people at parties arguing about the latest Weekly reviews. 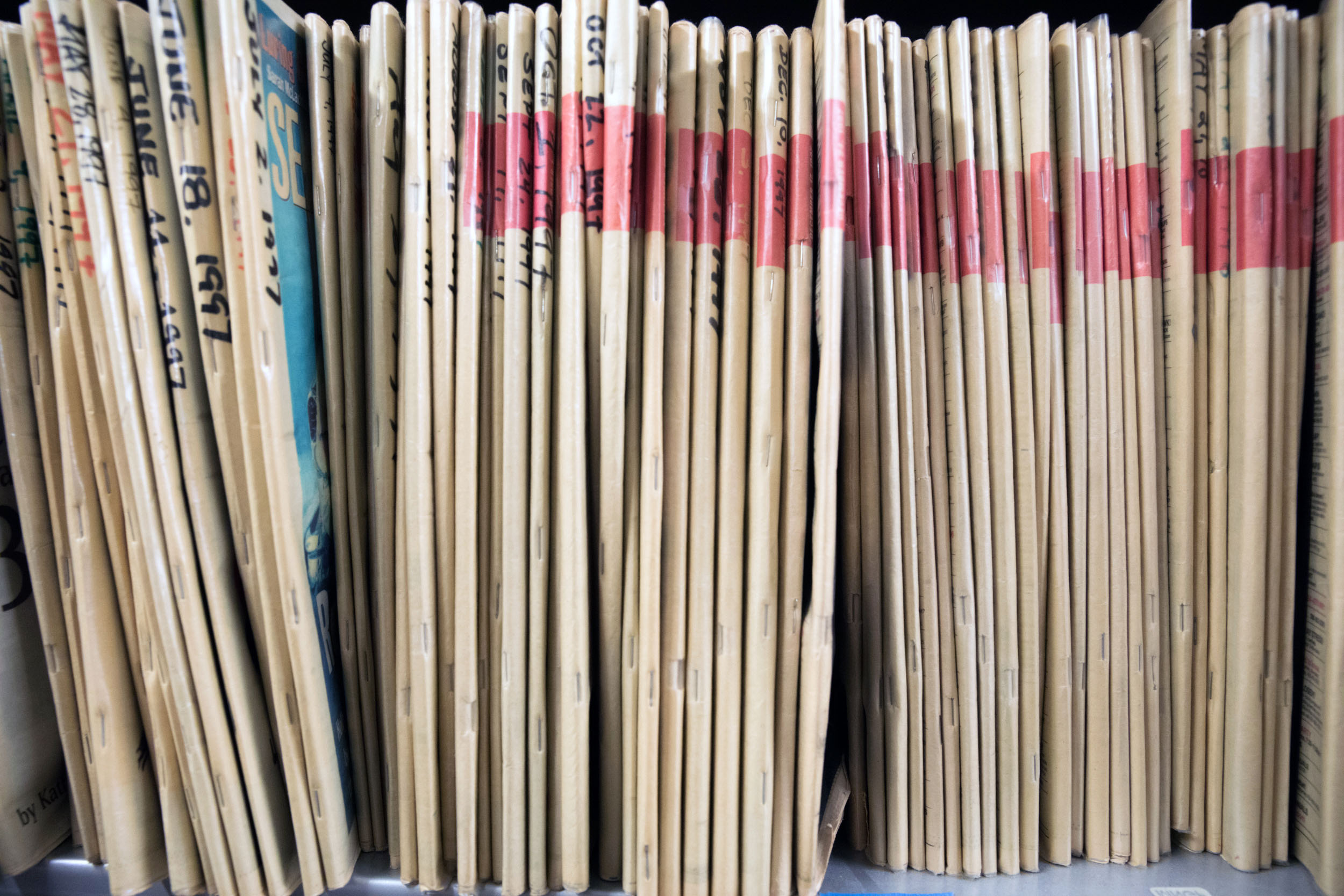 Copies of the Seattle Weekly dating back to 1977 seen during a tour of Seattle Public Library's sixth-floor archive room inside the central branch in downtown Seattle, Feb. 27, 2019. The Weekly is one of 40 local, regional and national periodicals housed in the private archive room at the library. (Photo by Matt M. McKnight/Crosscut)

Copies of the Seattle Weekly dating back to 1977 seen during a tour of Seattle Public Library's sixth-floor archive room inside the central branch in downtown Seattle, Feb. 27, 2019. The Weekly is one of 40 local, regional and national periodicals housed in the private archive room at the library. (Photo by Matt M. McKnight/Crosscut)

The new Weekly went for in-depth political analysis, fielded a battalion of arts critics — from opera to jazz. Local food and wine coverage and tough restaurant criticism were a hallmark. Brewster had authored the definitive food and travel guide, Northwest Best Places, shortly before the Weekly’s launch, and it became the region’s Michelin.

The audience for the Weekly consisted unabashedly of young urban professionals — yuppies. Unlike many other free circulation alternative weeklies that grew out of the ’60s or anti-war movement, the Weekly sought an upscale audience and nonhippie advertisers willing to pay good rates. It was really a “relaunch” of  Seattle magazine on newsprint, he says. “We were a high-minded literary magazine masquerading as an alternative weekly,” he says now.

Brewster threw himself into making Seattle more urban and urbane. The paper tackled the maverick governor, Dixy Lee Ray, head on, calling her “Madam Nuke” and launching a notorious feud. Brewster opposed the joint operating agreement between The Seattle Times and the Seattle-Post-Intelligencer, proposed in the early 1980s, that would merge the two papers' business operations. He launched an activist organization called POINT — People Opposed to a One Newspaper Town — that challenged the arrangement in court. He kicked off a symposium sponsored by Seattle’s chapter of the American Institute of Architects to promote urban living with a lecture on “Downtown as a Place to Live,” still a novel idea for Seattleites in the early ’80s. Another talk in that series: “Density as a Virtue.” The paper pioneered personal ads in Seattle, too, another way of bringing folks together.

Brewster even started a pub where Seattle’s emerging urbanites could gather, The Mark Tobey, below the Alexis Hotel off Post Alley. It was financed by some of the same Weekly investors. Brewster described it to Seattle Times columnist John Hinterberger as “Perhaps a place for soothing over City Hall differences, like between the [Mayor Charley] Royer Gang and the [Mayor Paul] Schell Gang, and sometimes beer can help.” It didn’t last, but foreshadowed a profusion of pubs and microbrews that have since swept the urban landscape.

I asked Brewster when he felt the Weekly had really hit its stride. The late ’80s and early ’90s, he believes. Those years featured a great writing staff, tremendous clout, new ventures, like the flowering of a regional book publishing division, Sasquatch Books, and the launching of a suburban sister paper, Eastsideweek. “We hit all the Seattle revolutions,” he said. “The food revolution, the arts revolution. We caught all the trends, except grunge.”

That last is a sore point. Sub Pop and the Weekly were housed in the same building, the Terminal Sales Building Annex, across from the Moore Theater. You’d never know grunge was coming or happened by reading it in the late ’80s and early ’90s. The paper was still hooked on chamber music. 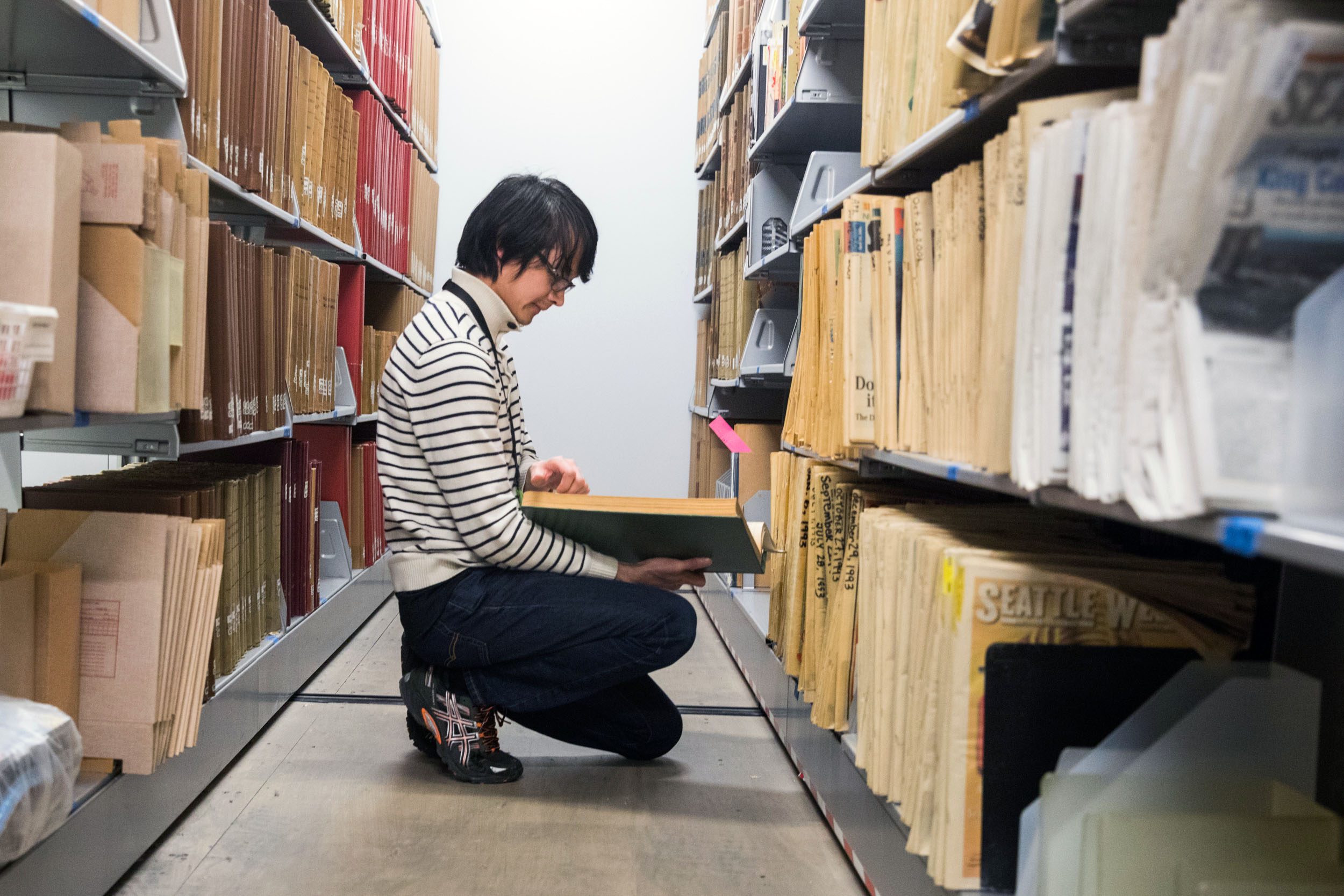 The city the Weekly nurtured, the mostly white professional readership willing to subscribe to a paid weekly, was not reflective of the changing city. In the early ’90s, a one-issue spoof of the Weekly called The Seattle Whitely made fun of the paper’s elitism and lack of diversity. Brewster says in retrospect he regrets “a blindness about the 80 percent of people who lived in Seattle.” The paper was interested more in “who was pulling strings” in town — the powerful — than the lived experience of so many others.

The Weekly emerged, and thrived, in a time when Seattle was starting to expand its urban horizons. The Boeing recession ignited a determination for the city to diversify and grow on its own terms. The Weekly embodied, especially in its first quarter-century, a desire to spur the city to grow up. It was born in an era when, Brewster says, the operative attitude of innovators and reformers was, “What are we waiting for?”

Brewster’s energy has taken many forms. He left the Weekly in 1997 to “retire,” and has since founded Seattle Town Hall and saved the historic sanctuary that houses it. He launched Crosscut and founded Folio: the Seattle Athenaeum, a private library now at the Pike Place Market. He is stepping aside from running the library, though he’s still involved and thinking about expansion. He’s also plotting to launch a new web-based publication — a writer’s collective he’s calling Post Alley.

The Weekly embodied the impatience of a city that needed to grow up. Brewster didn’t think the most recent Sound Publishing model was a good fit for the Weekly, though it continued to do some good reporting. The paper is gone, but that urban mission remains, and Brewster is still on task. 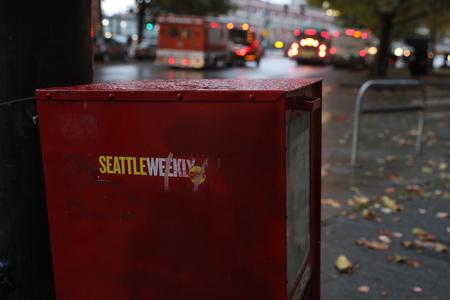