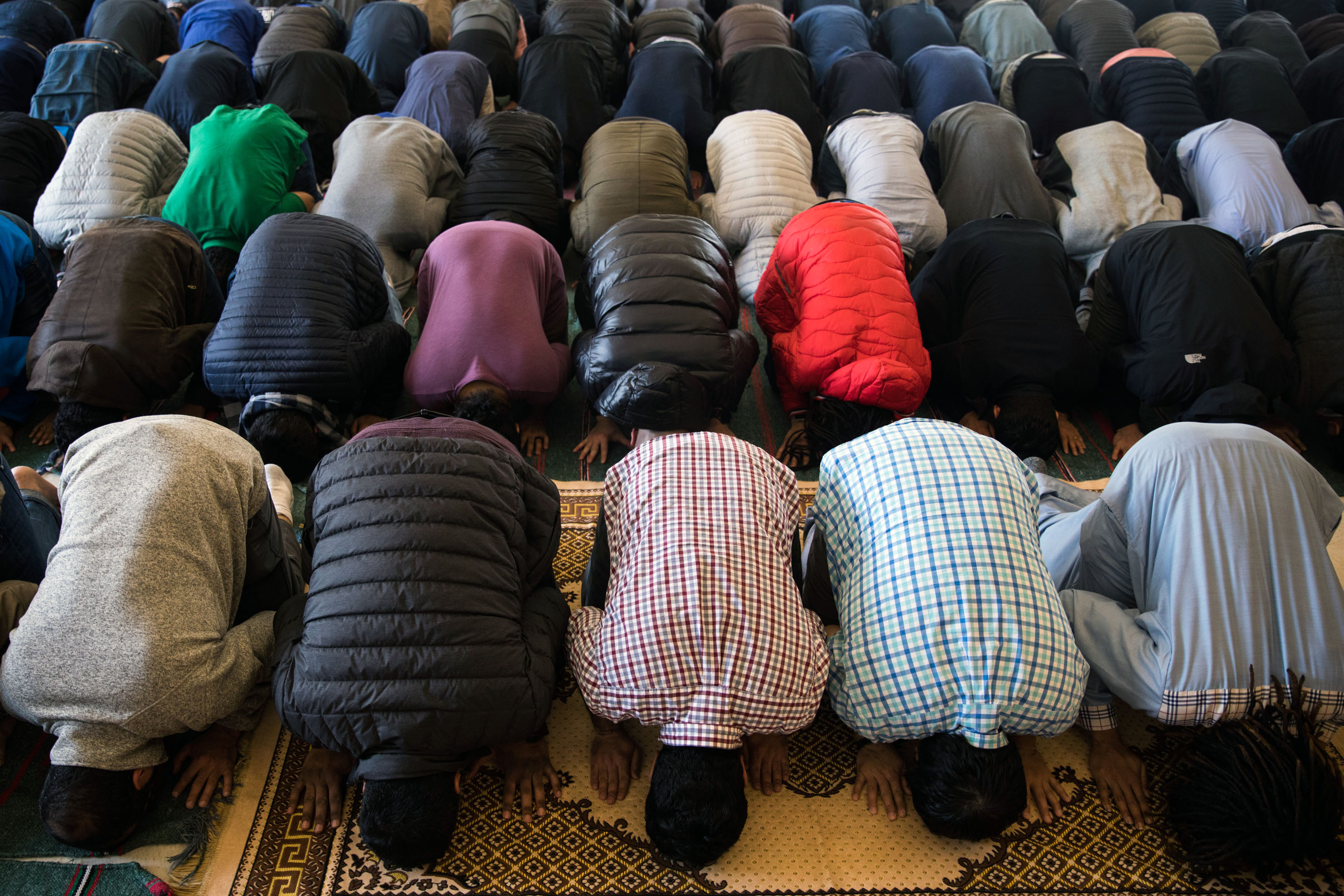 Worshippers during an afternoon Muslim prayer service at Plymouth Congregational Church in Seattle, March 15, 2019. (All photos by Matt M. McKnight/Crosscut)

As police stood guard, Muslims packed a room at a Christian church in downtown Seattle that had been rented out for Jum’ah, or Friday prayer.

Cab drivers, tech workers and, on the day after the New Zealand mosque attack, first timers and non-Muslims, too, all gathered together at Plymouth Congregational Church to listen to Imam Adam Jamal speak about the tragedy and pray.

Jamal began by giving the Muslim community permission to grieve.

“It is OK to be emotional. It is OK to feel grief,” he said. But “don’t think of those who died as dead, rather they are alive with their Lord.

“We know whatever happens, happens with the will of Allah.”

In the right-hand corner of the room, a table was set with flowers and notes left by neighbors. “We’re devastated by yesterday’s massacre,” one note read. “We want you to know our thoughts and prayers are with the victims and their families, as well as your community.”

At the opposite corner of the room, one woman sat and wiped tears streaming down her face with a crumpled tissue.

Jamal explained to those gathered that on Wednesday he had participated in training meant to prevent, or at least mitigate, mass killings. New Zealand happened hours later.

All told, 50 people were killed in two separate mosques in Christchurch, the largest city on New Zealand’s south island, with a population of about 400,000 people. Many more were injured, including children.

One person has been charged with murder — a 28-year-old Australian man, who appears to identify with extremist white nationalist ideologies. News outlets internationally have not hesitated to label the act terrorism. 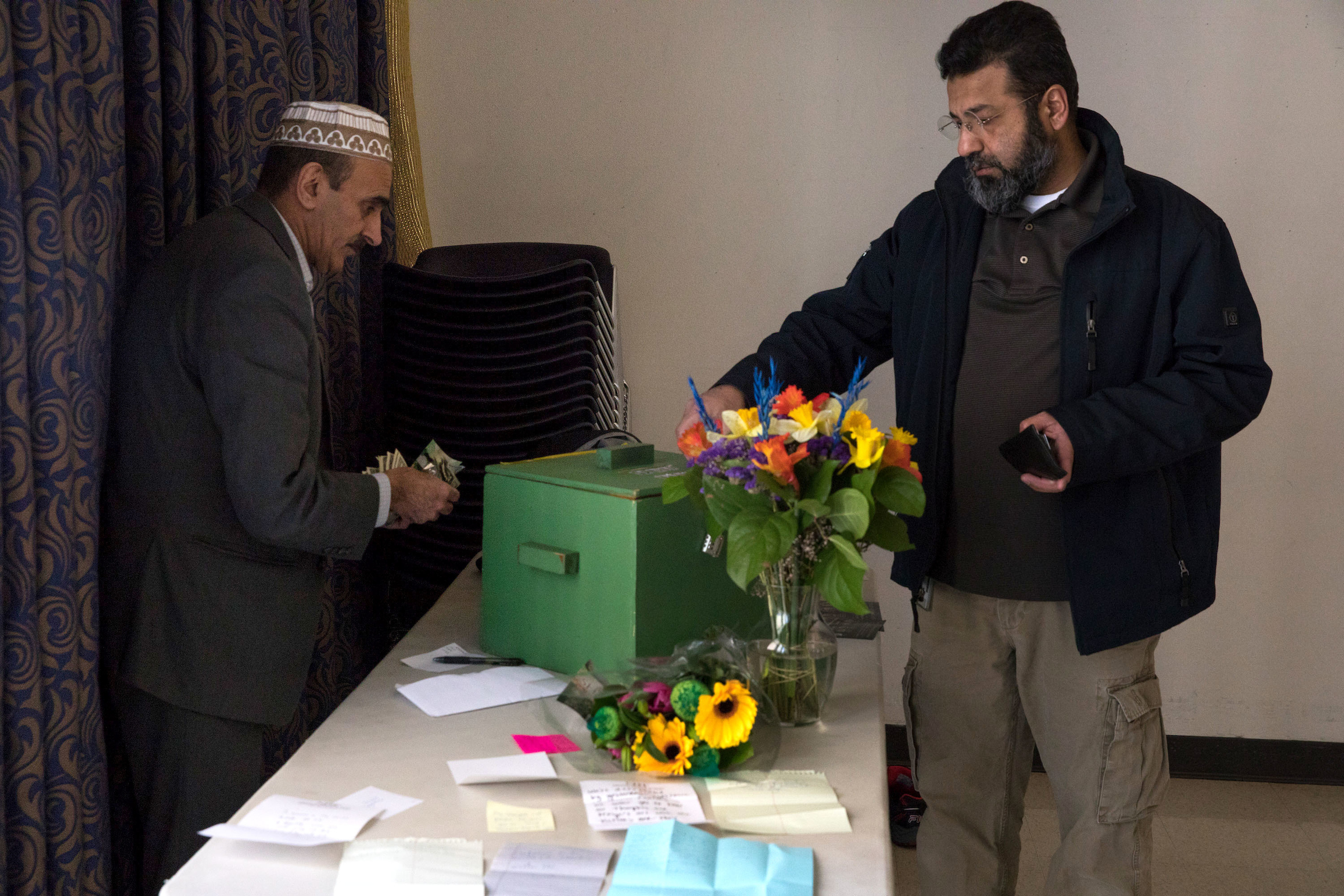 Muslims across the globe were rocked by the news of the shootings, which appeared to many as a culmination of rising nationalist sentiments worldwide. In the United States, the Anti-Defamation League, a Jewish nonprofit, found that right-wing extremists killed 50 people last year, including the massacre at Pittsburgh’s Tree of Life synagogue and a mass shooting in Tallahassee, Florida.

Before his rampage, the shooter posted a manifesto on social media, which mentions American figures, including President Donald Trump, as well as extremist ideologies espoused by other killers. Asked Friday whether white nationalism is a rising problem, President Trump said no. “I think it’s a small group of people that have very, very serious problems,” he told reporters in Washington D.C.

In contrast, the Pacific Northwest chapter of the Anti-Defamation League released a statement after the New Zealand attack, noting: “This cowardly act is additional evidence that hate is on the rise. Now, more than ever, we must work to combat hate and heal together – because an attack on one community is an attack on all our communities. In an act of solidarity and allyship, we recommend that you search for your nearest vigil and show your support by showing up.”

At the midday prayer service on Friday, Jamal announced that an interfaith vigil for those who had lost their lives would be held at the Muslim Association of Puget Sound in Redmond at 7 p.m. Monday. Elected officials and faith leaders will be present, said Aneelah Afzali, executive director of MAPS-AMEN. Jamal encouraged those at the service to attend the event and to find other ways to give back to the community in this time of need. 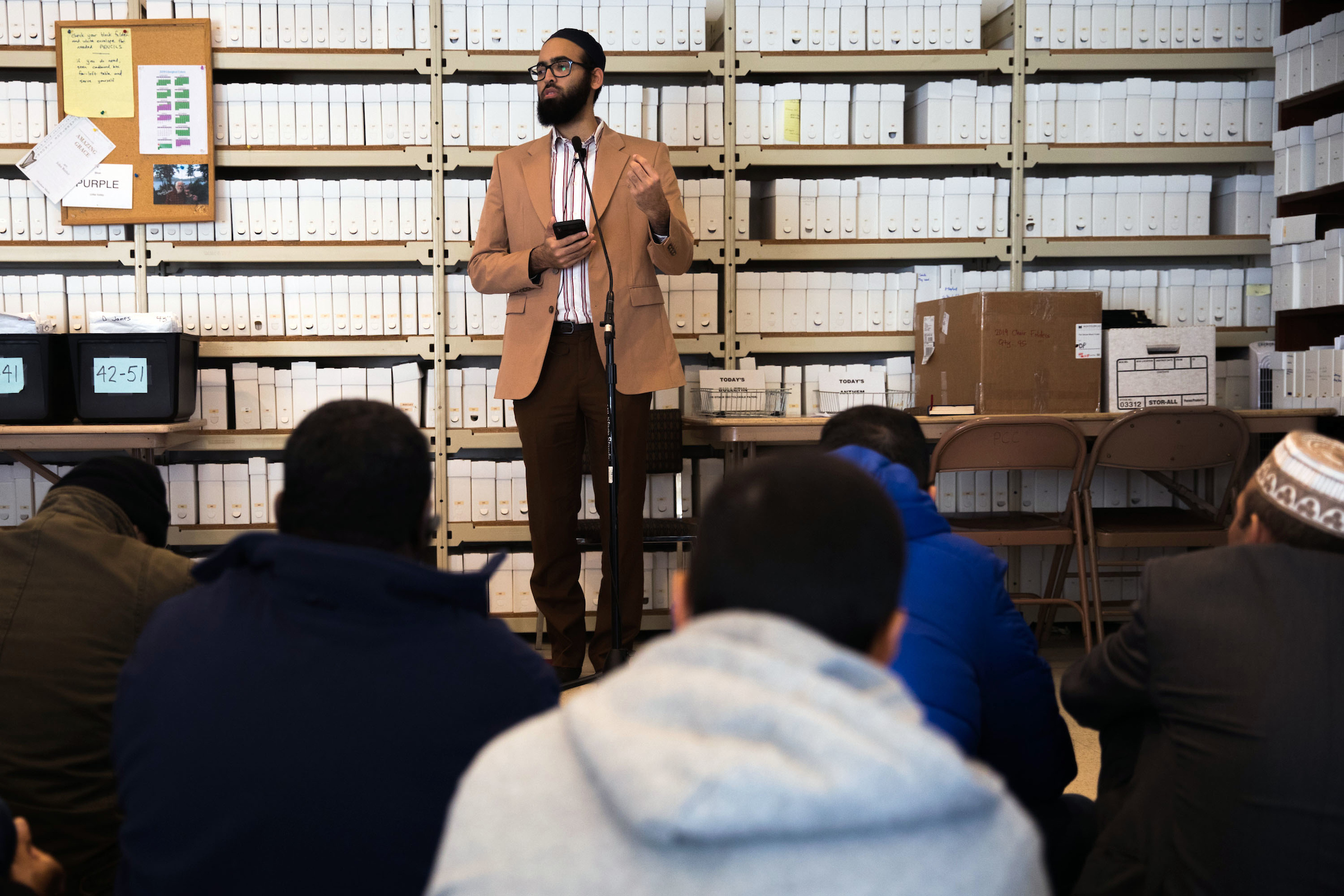 “A lot of people I’ve spoken to barely slept the night,” added Mohammad Sarhan, a member of the Downtown Muslim Association.

Others emphasized the Muslim community’s perseverance.

“Muslims are very resilient. This isn’t going to prevent anyone from practicing,” said Izdihar Bailey, 24, a convert to Islam. “We will persevere.”

Imran, 28, a tech worker who asked that his last name not be used, said he had recently moved to Seattle from New York. The deep grief he felt had been lessened somewhat by the outpouring of support from those near and far.

“It was actually really heartwarming,” he said, while pointing out that Islam teaches if one person in the community is harmed, then everyone must respond. 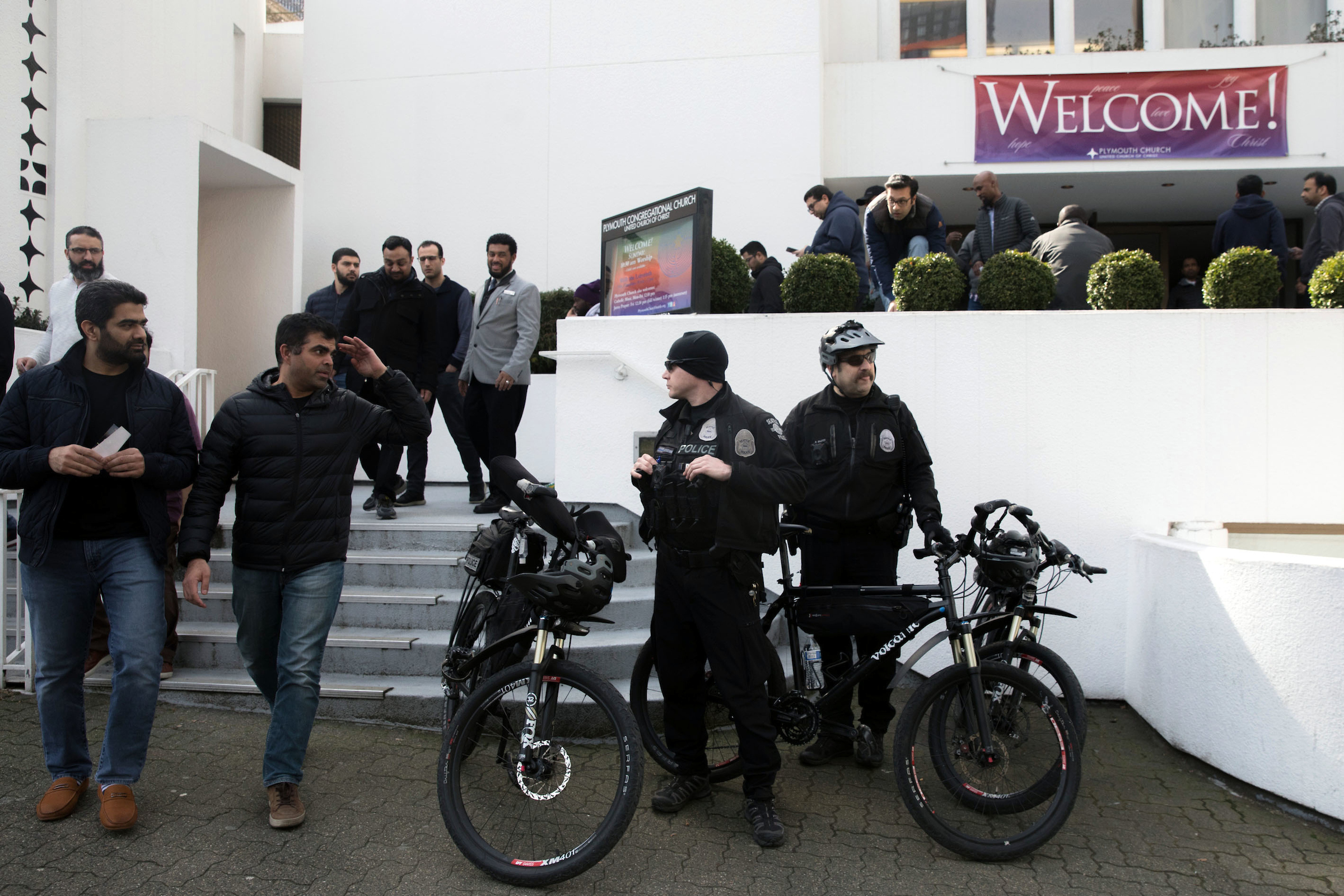 Worshippers exit Plymouth Congregational Church in Seattle after the afternoon Muslim prayer service. Seattle Police Department officers were stationed directly outside the church and on a nearby street corner on Sixth Avenue. (Photo by Matt M. McKnight/Crosscut)

Worshippers exit Plymouth Congregational Church in Seattle after the afternoon Muslim prayer service. Seattle Police Department officers were stationed directly outside the church and on a nearby street corner on Sixth Avenue. (Photo by Matt M. McKnight/Crosscut)