How we beat wildfires by burning the forest first 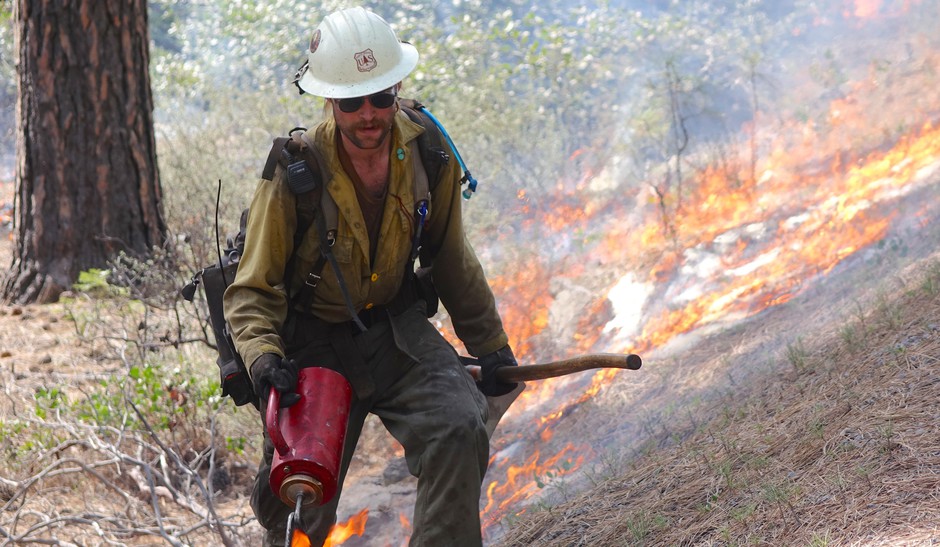 A member of the Wolf Creek Hotshots uses a drip torch to ignite the forest floor during a prescribed burn near Sisters, Oregon. (Photo by Jes Burns/OPB)

Before we began stopping fire in its tracks, forests were healthier. They had fewer trees, more open space and more fire.

“In a lot of our forest systems, we’ve excluded fire for so long. There used to be 30 to 40 times more fire than we’re seeing now,” said Reese Lolley of The Nature Conservancy and Washington Prescribed Fire Council. “For forest health, there’s a need to put fire back in those landscapes.”

That’s why land managers are using prescribed burns and thinning to restore forests and reduce the extra wood, sticks and needles that fuel megafires.

“Having a stronger understanding of that historical role of fire, in working to better integrate how we think with a warming, changing climate moving forward, that helps us make some better choices about where we choose to put fire,” Lolley said.

Lolley said prescribed burn areas can act as a break for firefighters when a megafire hits. Land managers often will consider an area’s topography when they plan prescribed fires. It’s easier for fire crews to work from the top of a hill to the bottom, and so that’s one aspect officials think about when planning prescribed fires.

These types of burns also can be used to protect communities. Take a recent prescribed fire near the outskirts of Roslyn, Washington. A private landowner had thinned the forested area on his property. Fire crews were able to run a prescribed burn through the area to better protect it in the future.

“When the next ‘Jolly Mountain Fire’ or a wildfire comes through, that is a place where wildland fire crews can manage that fire in a much safer way,” Lolley said.

In an earlier study, The Nature Conservancy identified 2.7 million acres of Central and Eastern Washington in need of restoration. While it’s a good tool, Lolley said there isn’t enough funding to use prescribed burns everywhere.

“We don’t have the resources to put fire on all lands, nor do the [federal and state] agencies, and so they’re making choices,” Lolley said.

Prescribed fires must also happen in the spring and fall, when fuel moisture is high and weather conditions are not sweltering.

In the pilot project, managers used prescribed burns on 13 areas on the eastern side of Washington’s Cascades and in the Selkirk Mountains in the northeastern part of the state.

According to a report on the project, smoke had “limited impacts to air quality in communities” in 12 of the 13 areas. One area was burned at the same time as another prescribed burn, and that led to two days where air quality was “unhealthy for sensitive groups.”

The pilot project successfully reduced fuels and didn’t cause a lot of damage to large trees, which the report said contributed “to the restoration of historically dry forests.”

The Washington Department of Natural Resources has devised a “20-Year Forest Health Strategic Plan,” which aims to increase the “pace and scale” of forest treatments, including prescribed burns and thinning. It would work to restore 1.25 million acres of forest.

“If we fail to do this work, we face formidable wildfire seasons in an increasingly difficult climate,” Hilary Franz, DNR public lands commissioner, said in a statement. “Improving the health of our forests will reduce risk to lives, communities, livelihoods, water supplies and essential forest ecosystems.”

An OPB investigation found that across the West, “foresters are falling short of what they need to do with fire as a tool.” That report found that thinning alone cannot restore forest health — it must be combined with prescribed fires.

“We know where we’ve been headed since 2014, 2015. Predictions moving forward are that we’re going to see a lot more fire on the landscape, whether we like it or not,” Lolley said. “So how do we work better toward managing our forests so that we can have better outcomes in terms of smoke, forest health and the other values we care about in our forests?” 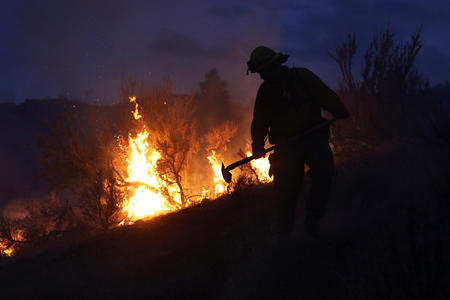