Standing up: Comedian sues to stop Greyhound from cooperating with Border Patrol

Even after the City of Spokane tried to stop it, Border Patrol continues to interrogate Greyhound passengers. 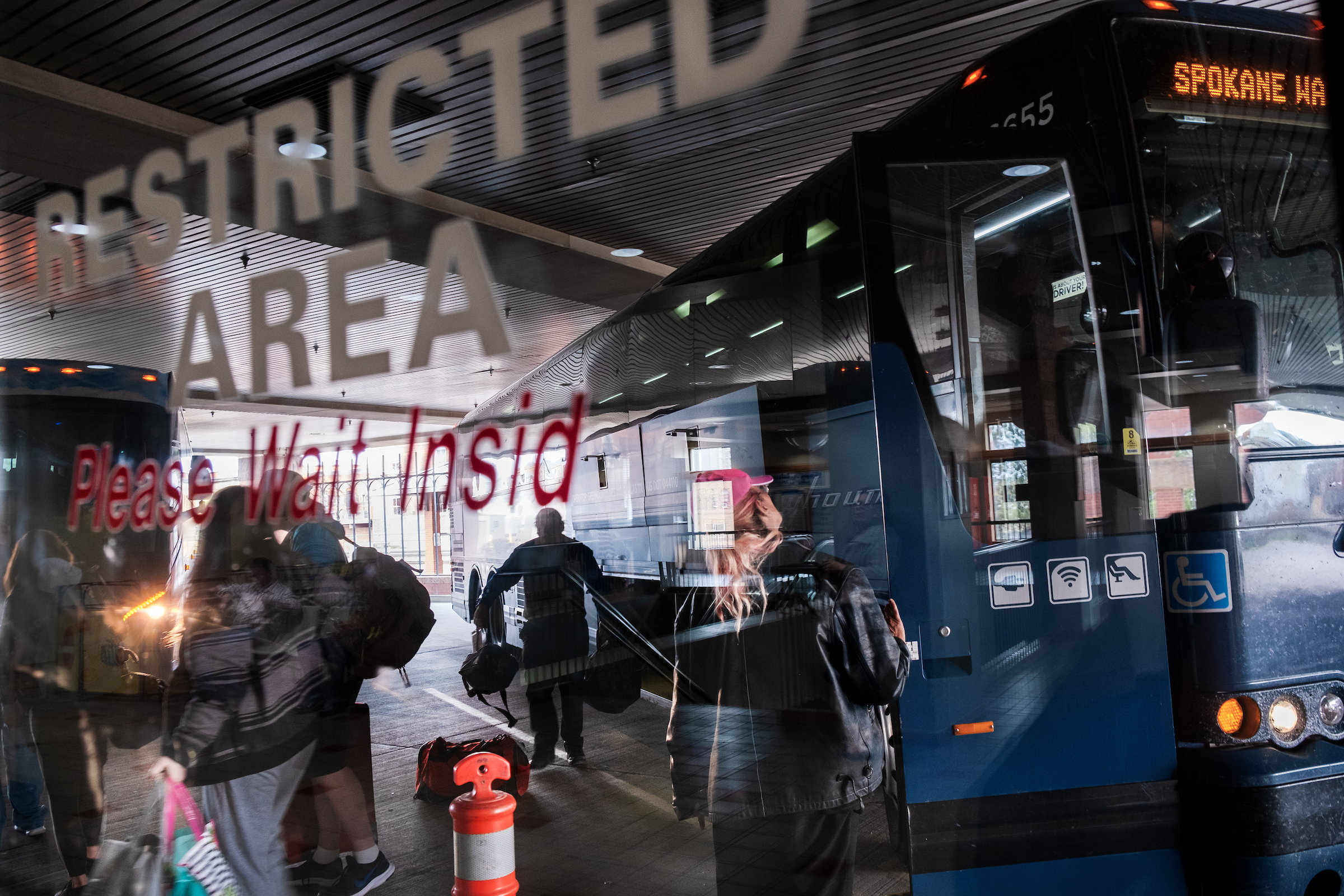 Passengers disembark a Greyhound bus after it pulls into the Spokane Intermodal Center in downtown Spokane, April 25, 2019. Mohanad Elshieky was removed from a Greyhound bus by immigration authorities at the center in January of this year and is seeking $250,000 in damages from U.S. Customs and Border Protection. (Photo by Rajah Bose for Crosscut)

He’s joked about it during sets in Portland’s comedy clubs. Now the up-and-coming comedian and asylee Mohanad Elshieky is suing Border Patrol for detaining him at the Greyhound station in Spokane.

On Thursday, Elshieky, a 28-year-old native of Libya recently heralded by late night host Conan O’Brien, filed a complaint against U.S. Customs and Border Protection. Elshieky is seeking $250,000 in damages under the Federal Tort Claims Act, which permits individuals who have been injured to sue the federal government. Represented by the Northwest Immigrant Rights Project and the American Civil Liberties Union of Washington, Elshieky says Border Patrol agents interrogated him during a layover in Spokane, all while calling him a lying “illegal.”

“I hope that by taking action over the way Border Patrol officers treated me, others will not have to experience the same degrading mistreatment that I faced,” Elshieky said in a news release about the complaint.

In response to questions about the complaint, Jason Givens, a spokesperson for Border Patrol, said in an email: “As a matter of policy, U.S. Customs and Border Protection does not comment on pending litigation. However, lack of comment should not be construed as agreement or stipulation with any of the allegations.”

Greyhound Lines, Inc., based in Dallas, Texas, did not immediately respond to Crosscut’s inquiry. The company has claimed in the past that while it is “aware that routine transportation checks not only affect our operations, but our customers’ travel experience … Greyhound is required to comply with the law.” Experts, however, argue Greyhound is not legally obligated to cooperate with Customs and Border Protection because, as a business, it is covered under the Fourth Amendment, which protects against “unreasonable searches and seizures.”

On the morning of Jan. 27, Elshieky was on his way back home to Portland after traveling to Pullman. In a phone interview, Elshieky explained he had opted to ride a Greyhound bus because it was snowy outside.

After boarding the Greyhound bus in Spokane, a Border Patrol officer approached Elshieky and began questioning him. According to the complaint, two Border Patrol officers boarded the bus. They did not question everyone, only certain individuals. A man who appeared to be Latino and who was sitting nearby, for example, was also questioned. He was allowed to remain on the bus after showing his U.S. passport. After a Border Patrol officer approached Elshieky, he showed his Oregon state driver’s license. (In Oregon state, drivers must show proof of lawful presence in the U.S. before obtaining a driver’s license.) The officer then asked him if he was a U.S. Citizen; Elshieky explained he wasn’t.

“At this point, the officer's demeanor shifted. He placed one hand on the seat in front of Mr. Elshieky, and another on the seat beside him, blocking Mr. Elshieky's exit and restraining his movement from the seat,” reads the complaint. “The officer then asked if Mr. Elshieky had a passport, and Mr. Elshieky responded that he did not have one with him.”

Elshieky was able to present a document issued by U.S. Citizenship and Immigration Services that showed he is authorized to work in the U.S. Still, without even glancing at the document, the officer ordered Elshieky off the bus. Two other passengers of color were also forced off the bus, according to the complaint.

In all, five or six Border Patrol agents stood outside. After making a call, one officer noted that there were no records of Elshieky’s legal status.

“Illegals fake these [documents] all the time and use them," one officer said as Elshieky tried to explain that he had recently been granted asylum.

According to the complaint, Border Patrol said: “We've heard this all before," and "illegals say that all the time."

“I am getting deported right now. This is what is going to happen,” Elshieky said he thought at the time. “It just made me feel very disrespected.”

“When I got my asylum I thought that was it. I’m untouchable now,” he said. He described the incident as a “slap in the face.”

Twenty minutes passed before Elshieky was finally released. When he boarded the bus again, Elshieky burst into tears, the complaint said. Elshieky, who has nearly 24,000 Twitter followers, immediately began tweeting about what had happened. Elshieky said since then he’s been the target of death threats and other menacing messages. Some have suggested he should be more grateful, while others have said: “Go kill yourself.”

“It’s definitely not pleasant, but I’m getting a lot of support, too, so I try to just pretend that I don't see that shit,” he said.

Elshieky said he stopped doing stand-up for about two weeks until the clamor died down.

Elshieky was granted asylum in 2018, four years after arriving in the United States on an exchange program sponsored by the U.S. Department of State. He applied for political asylum after claiming that militias in Libya suspected he was a foreign agent and threatened him.

After enrolling at Portland State University as a business student, a professor who taught public speaking suggested he try stand up.

“I’ve always loved stand-up comedy, just watching it. But I never thought I would be doing it myself,” Elshieky said.

Elshieky says he realizes, unlike others, he has the opportunity to have his voice heard.

“I definitely need to do this for me and them,” Elshieky said, referring to others who have been approached by Border Patrol on Greyhound buses.

The ACLU and other advocates argue the raids, which customs agents have conducted on an increasing basis since the election of President Donald Trump — including here in Washington state near the Canadian border — violate passengers’ Fourth Amendment rights. 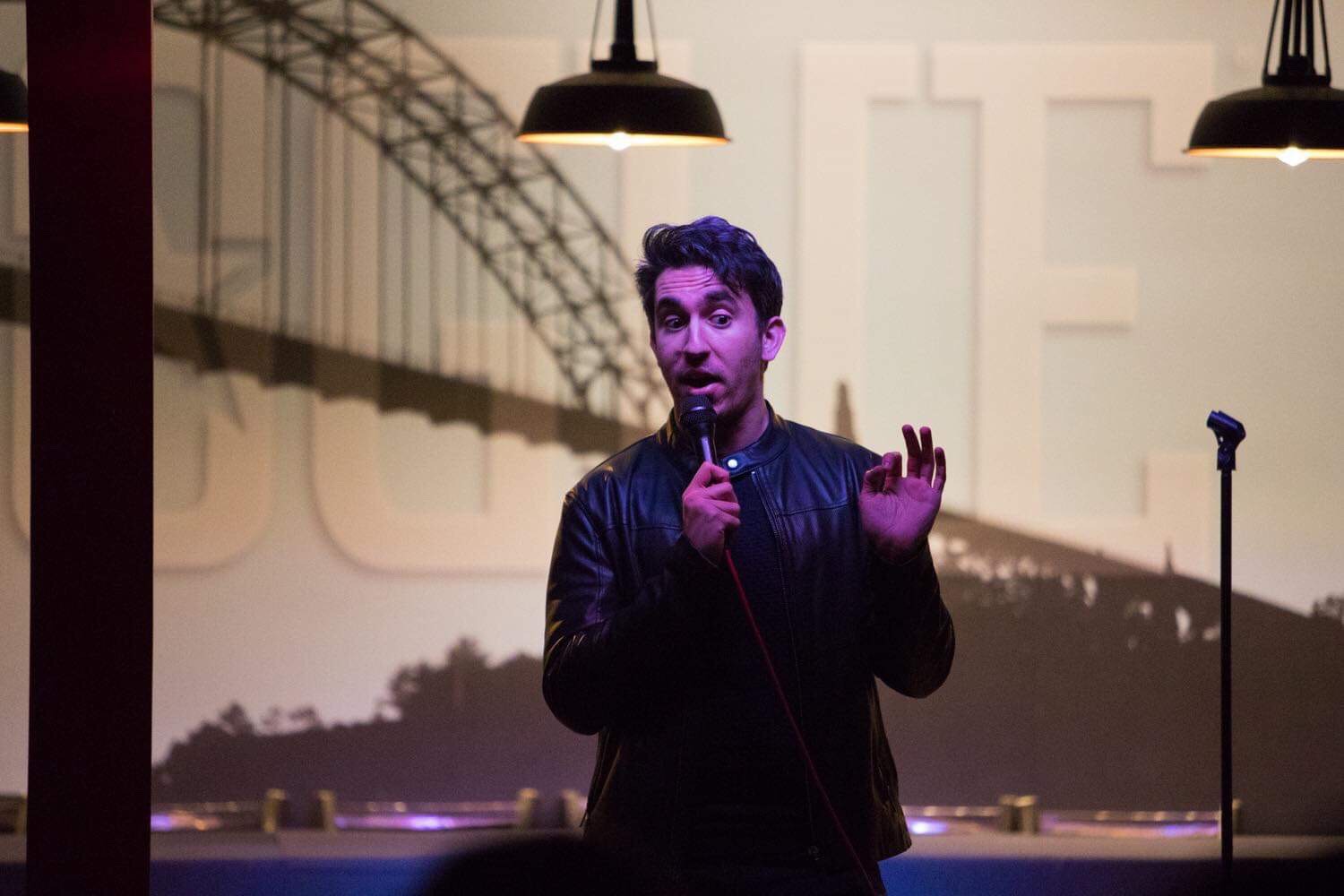 Under the law, Border Patrol officials are allowed to search vehicles without a warrant as long as they’re within 100 air miles of the border. But officials must still have either probable cause or consent to conduct the searches.

Advocates say Border Patrol has fallen back on regularly interrogating passengers without probable cause and singling out individuals because of the color of their skin or because they have a foreign accent. Passengers are often unaware that they have the right to remain silent.

“Border Patrol must be held accountable for trampling the constitutional rights of our community members,” said Matt Adams, legal director for NWIRP. “Arrests like this one are especially egregious because Border Patrol knows very well these buses are not coming from or going to the international border.”

There has been outcry over Border Patrol’s Greyhound searches in other parts of the country.

CBP agents also stopped a Los Angeles resident as he boarded a Greyhound bus in Indio, California. The agents, according to the ACLU, detained the man because his “shoes looked suspicious,” like someone who had recently crossed the border.

The City Council in Spokane recently passed an ordinance meant to put a stop to the searches conducted by Border Patrol. Council members noted that since the start of 2013, Border Patrol agents had apprehended an estimated 200 people at the Spokane Intermodal Facility — where the bus terminal is located — without judicial warrants.

City Council President Ben Stuckart said the ordinance was passed over the mayor’s objections. Because the city owns the Spokane Intermodal Facility property, the mayor could enforce the ordinance by suing Border Patrol but chooses not to, he explained.

“For the city to act it’s going to take electoral change,” Stuckart said, while noting that the current mayor’s term-limited tenure comes to a close at the end of the year.

Washington state Attorney General Bob Ferguson has attempted to put an end to the searches, too, by sending a letter to Greyhound CEO and President David Leach in February.

Elshieky said as a comedian he continues to tour the country but that he refuses to ride Greyhound. 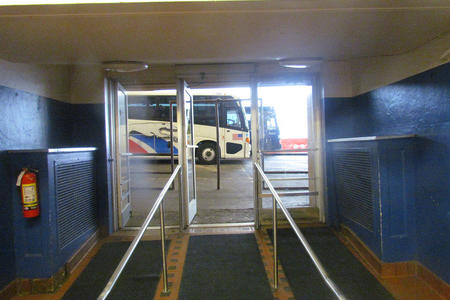