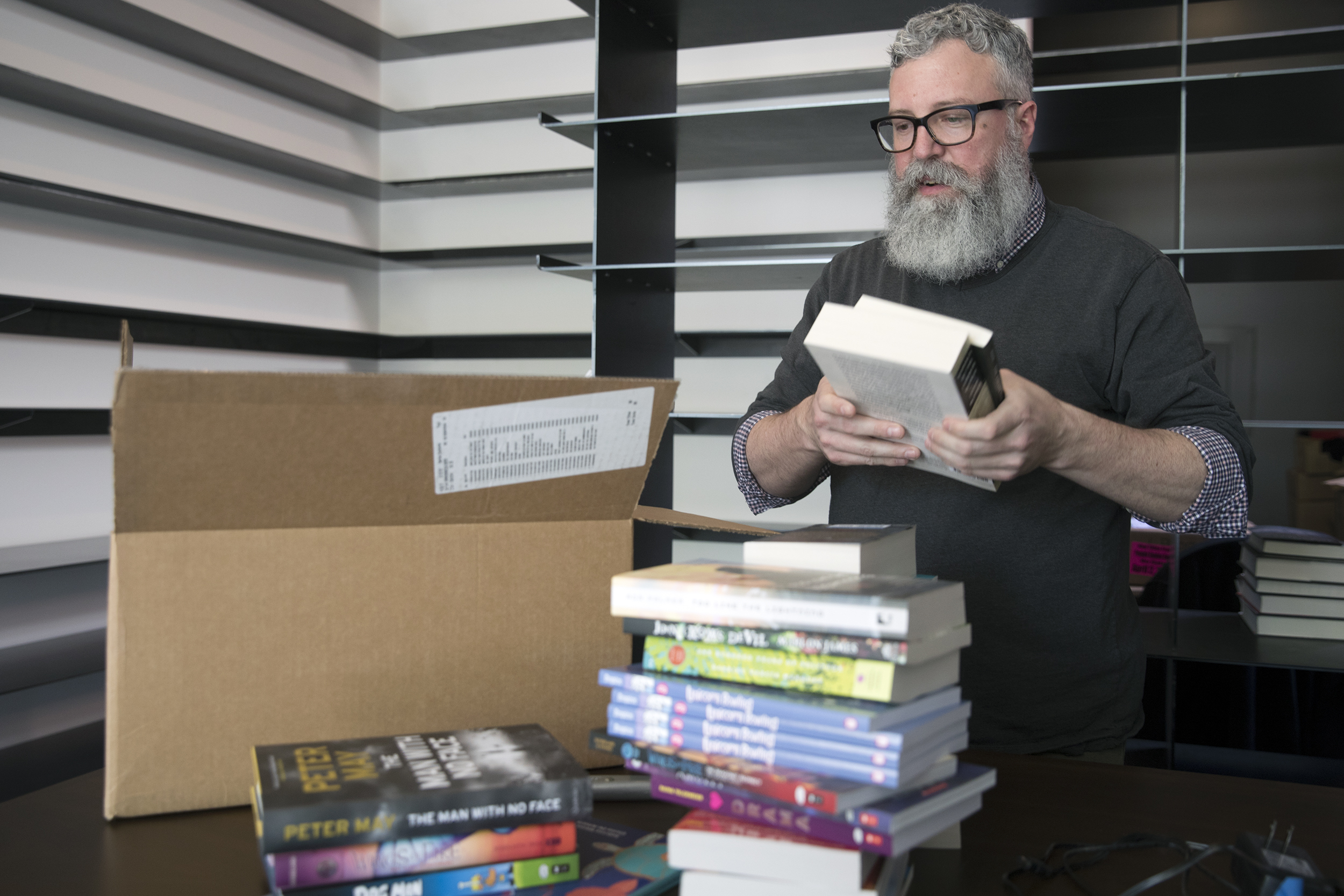 It’s five days before the grand opening of Madison Books, and manager James Crossley looks a bit like a character in an absurdist novel. He’s standing behind the counter at the tiny new Madison Park bookshop, which is freshly painted, swept clean and ready for business. Except: the long rows of shelves are empty, while unopened boxes of books are stacked all around.

“We’re still waiting for our certificate of occupancy,” Crossley says. He’s been expecting this final city approval for a while, but it’s been delayed for reasons unknown.

But that hasn’t dimmed Crossley’s excitement. He’s certain he’ll be cleared to move books onto shelves soon, and says the shop will definitely be open for Independent Bookstore Day festivities this Saturday. “Even if I have to sell books out of boxes on the sidewalk,” he vows.

Gray-bearded, spectacled and friendly, Crossley has turned a deep love of books into a career. He worked at the (dearly departed) Bailey/Coy Books on Capitol Hill, and more recently at Island Books on Mercer Island. He also did a stint at Amazon in the company’s early days (1997-2003), working in the warehouse and later as a software coder.

Now he’ll be working with another ex-Amazon employee: Tom Nissley, the owner of Madison Books, who also owns and operates Phinney Books. Prior to buying the Phinney Ridge store in 2014, Nissley worked in the books department at Amazon for about 10 years, but didn’t cross paths with Crossley until they were both working at independent bookstores.

“I never thought I would own one bookstore, much less two,” says Nissley, by phone. He was approached about a year ago by lifetime Madison Park resident Susan Moseley, who he says has been trying to get a bookstore back in her neighborhood since Madison Park Books closed 13 years ago. (Moseley was not available for comment.)

“When Susan offered to help with start-up costs and rent,” Nissley says, “and I knew James was interested in running a store, it seemed doable.”

So what’s it like to open an independent bookstore in the city of Amazon?

“Retail has taken a hit, generally, from big box stores,” says Crossley, looking relaxed in his soon-to-be store, hands clasped on the spot where the register will sit. “But bookstores are doing better than most. I’ve read that business schools are seeing bookstores as a model for smaller retail — because it’s about personal connections.” In addition, he theorizes, bookstores were some of the first businesses to have to address the impact of Amazon (since the company started as an online bookstore), so they’ve had more time to figure out how to succeed.

In this case, “little” is an understatement. Madison Books is minuscule — at 400 square feet, it’s about the size of an old-school barber shop, and one-third the size of sister store Phinney Books. But the volume is used efficiently, with sleek steel shelving lining the walls almost to the ceiling. “I don’t like to think about the square footage,” Crossley says with a smile. He prefers to think in terms of limitless possibilities.

Unlike 67 Books, the (short-lived) 1990s Seattle bookstore that sold exactly that number of titles, or Morioka Shoten, the decidedly minimalist Tokyo bookstore that sells just one book at a time, Madison Books will have a wide, if tightly packed, selection. “We’ll have fiction, nonfiction, children’s books, cooking, sci-fi, mystery, gardening, science, nature, politics, business,” Crossley says, sounding like the list could go on.

But with space at a premium, the challenge is how many titles to feature in each genre. Crossley says he learned a lot about the store’s capacity when he opened a pop-up prototype in the raw space for two weeks over Christmas. He says he felt reassured when he realized, “I could see people browsing.” He understood such behavior is only possible when there’s a large enough selection.

As for the criteria as to what gets stocked: “It’s more art than science,” Crossley says. Selections will be made in part by “what I find interesting,” he says, and in part by “neighborhood purchase patterns.”

I learned a lot about the book business when I worked at Amazon, but I felt so distant from the people actually buying the books.”
— Owner Tom Nissley

It’s the same philosophy embraced by store owner Nissley. “That’s the benefit of a small store,” he says. “I don’t compete with Amazon, because we do such different things. Customers understand that, too, in a way they maybe didn’t when Amazon first started. They come into a place like this expecting a different experience.”

Nissley left Amazon after becoming an eight-time Jeopardy champion, with winnings totaling $235,405. His plan was to take time off to write a book, which he did (A Reader’s Book of Days: True Tales from the Lives and Works of Writers for Every Day of the Year), but when the Phinney Ridge bookstore (then called Santoro’s Books) came up for sale, he couldn’t resist.

He’s gained invaluable insights about his customer base over five years at Phinney Books. “I know my customers, and have confidence about what I need to stock. I don’t have all the New York Times best-sellers on the shelves, but I do have books in translation, because I like them and know I have enough customers who will like them. That’s the fun part.”

Asked if this second bookstore marks the beginning of his own megachain, Nissley laughs. “No! That’s the last thing I want,” he says. “I learned a lot about the book business when I worked at Amazon, but I felt so distant from the people actually buying the books. My favorite experience there was during the holidays, when we would all have to help out in the Seattle warehouse. It was the only time I saw the books and thought about them going to individual people.”

Back at Madison Books, a regular stream of people passes by the big front window, some peeking in. “There’s such great foot traffic here,” Crossley says. “It reminds me of the kind we used to get at Bailey/Coy. And in the summer this place is like a little beach town, so there will be even more.” He adds that for small, independent stores, there’s actually a plus side to Seattle’s increasing road congestion: “People don’t want to deal with parking — so they do all their shopping in their own neighborhoods.”

Crossley says he can’t wait to start recommending titles, including the hyper-contemporary novel Ducks, Newburyport, by Lucy Ellmann, a thick advance copy of which he’s been reading as he awaits occupancy approval. He’s also eager to spread the word about Underland, a new nonfiction title by nature writer Robert MacFarlane, and books by Seattle novelist G. Willow Wilson and local children’s series writer Asia Citro. But mostly, he wants to open his doors and learn about the literary tastes of his customers.

“In small bookstores, the focus is on what the neighborhood wants,” Nissley says. “We might only be selling three copies of a book, rather than 1,000, but those three copies feel so much more meaningful.”