What would Seattle gain by hosting a presidential debate?

Local Democrats, including Seattle Mayor Jenny Durkan, want the party's candidates for president to face off at the Paramount Theatre. Here's why. 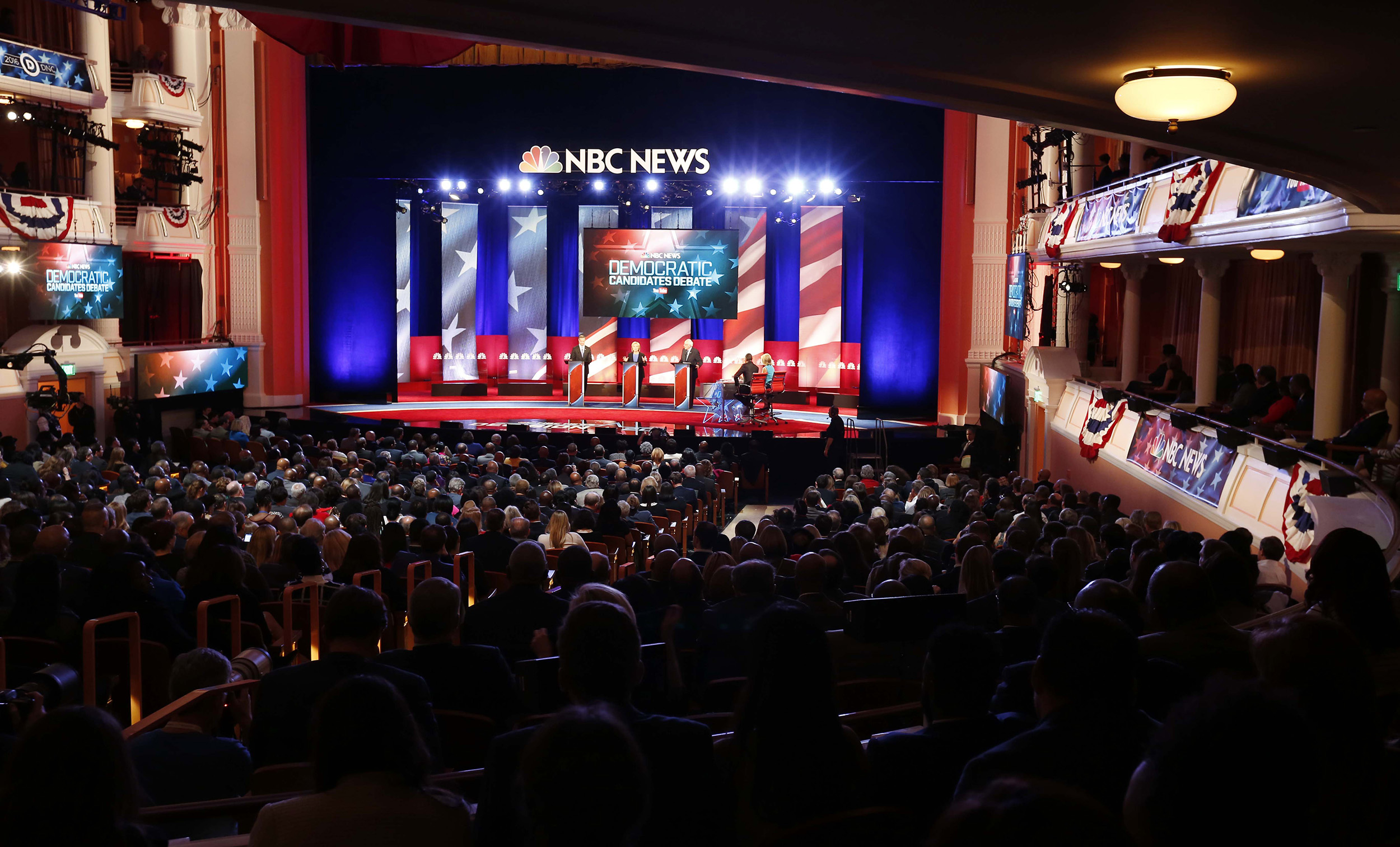 Washington state has never been much of a hotspot for presidential politics. The reliably blue state has never hosted a Democratic presidential primary debate; it doesn’t appear Republicans have ever held a debate here, either. Local officials — including Seattle Mayor Jenny Durkan — think it’s time for that to change.

Durkan has joined Tina Podlodowski, the chair of the Washington State Democrats, in urging the Democratic National Committee to hold a presidential debate in Seattle this election cycle.

The two Democratic leaders sent out a news release Monday morning announcing their efforts to bring a Democratic primary debate to Seattle, a campaign that has been going on behind-the-scenes since February.

"Our state has a national reputation for innovation and leadership on issues like marriage equality, clean energy, and minimum wage," Podlodowski said in the news release. "... We are often the first adopters of ideas that sweep the nation, and there’s no better place than Washington state for the DNC to host a presidential primary debate."

The push comes as the Washington State Democrats are embracing a more meaningful presidential primary in 2020. For the first time, state Democrats will use the results of the primary election to help choose their party’s nominee. Until now, Washington Democrats have always used weekend caucus meetings for that purpose.

Washington’s primary also will be happening earlier in the election cycle — in March instead of late May — when more presidential candidates are likely to still be in the race. That, too, could make the state’s primary more relevant in 2020.

For Podlodowski, all of those changes mean now is a good time for Washington to step into the national spotlight by hosting a debate. She’s asking Washington residents to sign a petition in support of the idea.

Durkan and Podlodowski even have picked out a venue: the Paramount Theatre in downtown Seattle. Josh LaBelle, the executive director of the Seattle Theatre Group, which runs the Paramount, is on board with the request.

Heather Weiner, a consultant with the Washington State Democrats, said party officials would expect a Seattle debate “to bring attention to the state of Washington, to motivate Washington’s voters to pay more attention, and to help all the Democratic candidates on the ballot.”

She said she thinks having the national spotlight on Seattle could help drive strong turnout among local Democrats. That could potentially help not only the Democratic candidates for president — a field that includes Washington Gov. Jay Inslee — but also benefit other candidates further down the ballot, Weiner said.

Others are less sure that would be the case. Todd Donovan, a professor of political science at Western Washington University, said that because the primary debates are scheduled to occur so many months before the November election, “it’s hard to see how that would affect down-ballot stuff.”

Holding a debate in a city like Seattle could make for a different mix of questions, however, Donovan said. Because audience questions are often part of the format, candidates debating in a high-cost city such as Seattle might be more likely to field questions on topics such as homelessness or the high cost of rent, he said.

He said those topics don’t come up as much in some of the more common presidential debate locations, which often have included early primary states, such as Iowa and New Hampshire.

“They never hold debates in places where people are facing housing insecurity the way people might be on the West Coast,” Donovan said. “That’s a really different thing.”

That’s part of what Durkan is hoping for: a chance to help “frame the issues in the election,” the mayor said in a written statement.

“The location of the debate definitely shapes the questions that are asked, the audience that is present and how the candidates respond,” Durkan said in the statement. “It is a chance for Seattle to weigh in and be heard — about the challenges and opportunities in American cities.

“… Having a debate in Seattle shows that Democrats can harness a booming economy, face the real challenges it creates and have a vision for building an inclusive and just future.”

Cathy Allen, a Democratic political consultant based in Seattle, said a presidential debate is unlikely to boost the city’s profile significantly. It could, however, provide a fundraising boost for the state Democratic Party, she wrote in an email.

“The most I can see that it really does is raise money for the Democrats — and get them visibility, but it hardly is much to write home about,” Allen wrote.

Inslee — who has been making the rounds on cable TV and had his own town hall on CNN last week — probably wouldn’t stand to benefit much, she said.

“Inslee is doing the right kind of visibility-building by running. He doesn't need the publicity here — and debate sponsors are reticent to have debate[s] in states where there is a longshot local home state candidate,” Allen wrote.

Inslee could get a slight home-court advantage if he could manage to pack a Seattle debate audience with friendly faces, said Donovan, the WWU professor.  While attendance at debates is tightly controlled and the events are heavily scripted, any extra applause a candidate gets can affect how people view that candidate when watching from a distance, Donovan said.

Washington Republicans aren’t angling for a local debate the same way the state’s Democrats are. For one, the GOP primary may be uncontested, in which case there wouldn't be any Republican primary debates. Republican President Donald Trump filed for re-election the same day he was inaugurated in 2017.

State GOP Chair Caleb Heimlich has his own theory on why his Democratic counterpart is pushing for a debate. He said Washington Democrats are probably looking to focus the 2020 election on national issues, rather than talk about what their majorities are doing at the state Capitol. He claimed many of Democrats’ state-level ideas — such as enacting a capital-gains tax, which would affect high-value sales of stocks and bonds — are unpopular among independent and moderate swing voters.

“… For them, having a debate puts the focus on Washington, D.C., instead of on Olympia.”

Trump, for his part, performed poorly in Washington state in 2016, winning only 38 percent of the vote in the general election.

Heimlich said he wasn’t aware of any Republican primary debates that have been held in Washington state in recent years.

Chris Vance, a former state Republican Party chair who has since become an independent, said he doesn't recall any, either. In a text message, Vance said he is almost certain that no type of presidential debate — primary or general — has ever been held in the Pacific Northwest.

In a February letter to the head of the Democratic National Committee, Podlodowski, Durkan and Seattle Theatre Group's LaBelle played up that point.

“This would be historic, as the Pacific Northwest has never hosted such a debate,” Podlodowski, Durkan and LaBelle wrote. “It’s time to bring that streak to an end.”

Democrats are planning to hold 12 presidential primary debates: six this year, and six in 2020. Only two of those debates have confirmed locations so far. One will take place in Miami and another in Detroit.

The schedule of Democratic primary debates is supposed to wrap up in about April 2020.