The gear retailer shocked employees and customers by suddenly closing after 25 years in business. 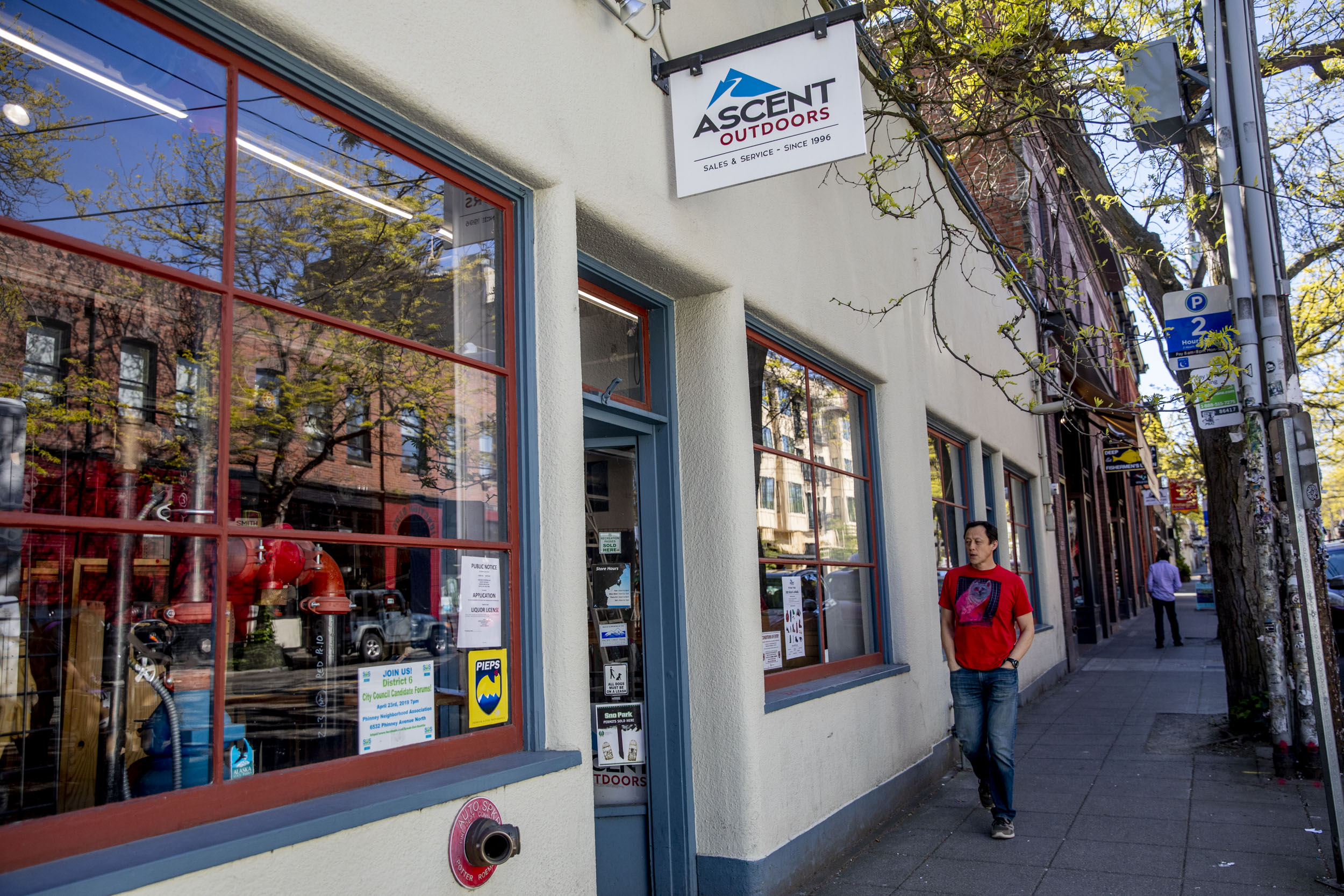 With its emphasis on second-hand gear sales, store-credit trades and high-end selection, outdoor gear retailer Ascent Outdoors has been a cornerstone of Seattle’s recreation community since 1993. But 30 minutes before closing time this past Saturday — just weeks after the store’s birthday celebration — current owner Solon Scott told employees at Ascent Outdoors’ Ballard Avenue location that the store would end operation that evening. He also announced the closure of nearby Ascent Cycles and Ascent Outdoors’ Redmond location.

The move caught many of the approximately 30 employees off-guard.

“I think everyone knew that we weren’t doing as well as last year. We weren’t meeting the same sales goals and numbers,” says Willie Willcoxson, who had been working at Ascent Outdoors as a sales associate since August. “But you know for me, personally, I didn’t realize that it was this bad.” 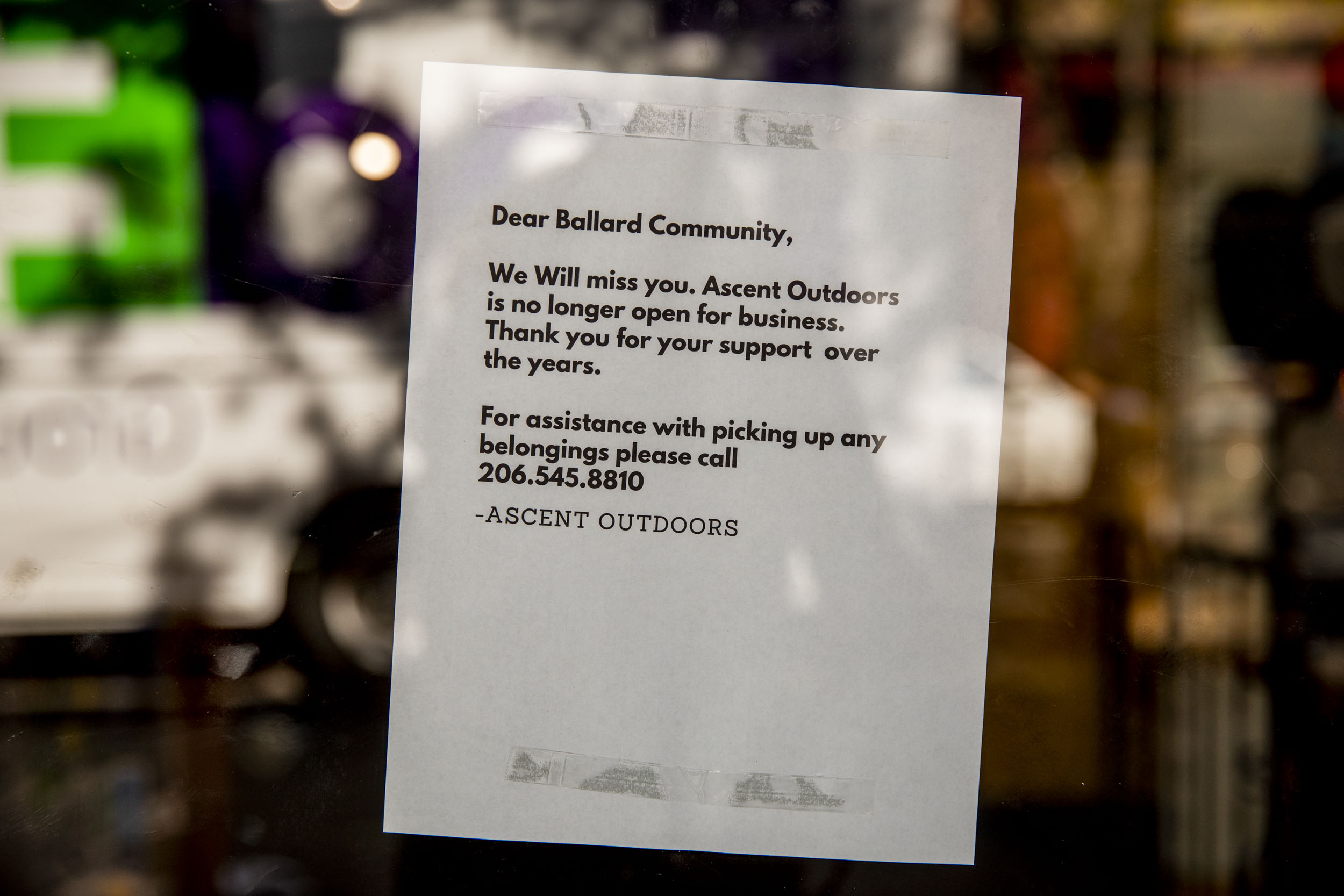 A letter from management appears on Ascent Outdoors' front windows in Ballard on April 30, 2019. The outdoor gear store permanently closed on April 27. (Photo by Dorothy Edwards/Crosscut)

A letter from management appears on Ascent Outdoors' front windows in Ballard on April 30, 2019. The outdoor gear store permanently closed on April 27. (Photo by Dorothy Edwards/Crosscut)

Ascent’s closure marks yet another retail departure from the neighborhood. At least seven other companies have closed or announced closure in 2019 in the greater Ballard area, including The Sneakery, Root to Table, Don Willis Furniture and Ballard Loft.

Since its inception, Ascent Outdoors sold a mixture of new and used outdoor gear and served as a key meeting spot and skills course provider for climbers and mountaineers throughout Puget Sound. Its Ballard and Redmond locations, coupled with the bikes-only Ascent Cycles, made the retailer one of only a handful of outdoor gear providers left in Seattle. Meanwhile, the region’s growing population is increasingly involved in outdoor activity: The number of hikers in Seattle alone doubled in less than a decade. Similar patterns of increased interest are reflected in state-level data.

“[Scott] took really good care of us while I was working there and everything, but I don't think he handled this super well,” Willcoxson says.

Crosscut has reached out to Scott multiple times by phone regarding the closure without a response. An autoreply email from the store's website claims Ascent Outdoors/Cycles is "going through bankruptcy" and refers all queries to Neeleman Law Group.

Chad Hoerner, a former Ascent Cycles customer service representative and buyer, confirmed his former colleagues were shocked by the closure, first reported in the MyBallard blog. Three weeks ago, Hoerner left Ascent for a new job doing inside and outsides sales and marketing with PIM Bicycles in Frelard.

“I got a good look at the front and back side of the business. Running any business is hard but for one with such high overhead, [it] was very stressful,” says Hoerner. “The Ascent day-to-day employees did not see this coming and were surprised to see having the locks changed on Saturday and during business hours. My heart especially goes out to Justin [Plinz], the service manager who turned down a great job opportunity since he was promised a pay raise and promotion to stay at Ascent Cycles.”

Hoerner received text messages Saturday from Ascent Cycles general manager Aaron Turner indicating that morale was low and that people were “fighting back tears.” Turner is planning a group ride for employees past and present later in the week as a last-hurrah of solidarity. According to Ascent Cycles’ Instagram account, employees hope to host a goodbye party for the public Sunday at 5 p.m. at NW Peaks brewery.

Companies that partnered with Ascent Outdoors found out later. Elevate Chiropractic Rehab was scheduled to host 19 people at the Ballard store on April 30 for a clinic targeted at hikers and mountain athletes.

“This was actually [going to be] our first event that we’d headlined up with them, so we were really excited about it, and then our marketing director got an email from them I think just yesterday [April 29], notifying him that all the locations were closing and so the event would be canceled,” says Elevate owner Katie Jenkins.

“[Even] the owners of the building just found out on Sunday that this was all happening,” Turner says. Greg Shaw, Ascent Outdoors’ second owner, still owns the building, he says.

Multiple former employees speculate financial pressures from inside and outside sources played a part in Ascent’s closing, specifically citing the recent opening of the Redmond store.

“One thing [Scott] mentioned that was a big factor was the minimum wage going up, and this was the year that small businesses had to be compliant with that hike as well,” Willcoxson says.

“[The] second location in Redmond wasn’t as successful as our Ballard one. [Scott] said that wasn’t part of it, but I kind of struggle to see how that's the case,” he says.

Hoerner agrees. “For the most part Ascent Cycles was profitable – it was the opening of the Redmond store and other factors that drove it into the red. [And] Ballard is expensive!”

Turner, who was nearing his 16th anniversary with the company,  said the closure of all three stores blindsided him. At Ascent Cycles, Turner noticed credit holds about a year ago, which he says limited his ability to stock product. His team kept inventory so low that recently “a few customers ask[ed], are you guys closing?” Turner says.

“We’ve had credit struggles with our vendors for a number of months,” Turner says, “and we’re all one bank account.”

Many customers have noted that Ascent Outdoors applied for a liquor license in its name on Oct. 24 of last year, possibly in an effort to supplement revenue; but Turner says the application had nothing to do with the closure.

“We’d have a liquor license so that we can legally serve alcohol at events, and that's all. There's no restaurant that's going in,” Turner says.

Customers new and old were also shocked by the news. “I’m a newcomer to Ballard and this shop was one of the first to welcome me to the neighborhood a few months ago,” says Caitlin Townsend. “They helped me find and fit a pair of hiking boots and made such a good impression that I kept going back to look for other outdoor items, like a proper Seattle raincoat. I’m so sad to hear they’re gone.”

“[Scott] signed the contract like a month ago — I did not get the sense that they were going out of business,” Summers says.  “ [It] did make me sad because I wasted a lot of time to make it look better, and I did it mostly out of charity.”

“I'm about to go in and use my credit because [general manager Thomas Greene] got a hold of the owner and he said ‘OK, you can come on a shopping spree right now,” he says.

It was not immediately clear whether customers would be able to use outstanding store credit, but Turner confirmed to Crosscut that all credits had been dissolved; and that Scott told Turner all remaining inventory is now owned by a bank and will go to auction.

“A lot of people used [their store credit] right when they got it, but a lot of people just had balances, and they're gone,” Willcoxson says.

In his 25 years in the outdoor industry, Turner says he’s never had as tight, ethically sound, or morally driven of a crew as he did at Ascent Cycles.

“We all worked hard, and we got paid reasonable wages for the work that we did. We tried to keep the stoke alive all the time, to have fun. We have an excellent customer base. I can't even count how many friends I made working through the shop,” he says. “It had an almost small-town feel to it even though we're in a large city.”

The single father of two boys is trying to figure out what’s next.

“This has been my livelihood and my lifestyle, and everything’s kind of turned upside down… [but] the entire cycling community has been incredibly supportive locally,” says Turner, who says he’s received “hundreds” of messages from concerned friends and customers since the closure. “I have at least a dozen referrals for jobs at bike shops in the Seattle area. It's unbelievable. I feel so lucky.”

Former customers note that the store's attention to used gear was a unique draw.

“[Ascent Outdoors] was a little bit ahead of its time,” says lawyer and avid cross-country skier Mike Weisman. “They curated what they resold very well. There was a great selection, everything was in very great condition, the prices were right — they had a good thing going. The store was often, especially on weekends and evenings, full.”

“Whenever anybody is looking for something, I always send them there,” he says.

“It makes sense [to buy used] because you were buying stuff where a lot of it is bombproof and it had many years of good life in it,” he says. “[Yes], you save some money at the same time, but people who are outdoors-oriented people are concerned about the environment so they look for things like that that are a little bit greener.”

Since December 2018, that resale program has gained competition from Wonderland Gear Exchange, a consignment-only gear store in North Ballard.

“On a personal level, we're as disappointed as anyone to have lost an icon of an outdoor gear shop,” says Wonderland co-founder Ben Mawhinney. “I've been picking up gear there since moving to Seattle and it's the only place I've had work on my backcountry ski setups. When a local business like Ascent closes, the community doesn't just lose a fun place to shop; we also lose access to the vast collective knowledge and expertise of the staff.”

“All in all, operating a small business in Seattle is really tough and only getting tougher.”

John Bolivar started Ascent Outdoors as multisport used gear purveyor Second Bounce at a location in Fremont in 1993. Greg Shaw purchased it two years later; he changed its name to Second Ascent to reflect a focus on outdoor gear, and moved it to its current location in 2001.

Scott bought the store from Shaw in 2014., In 2016, Scott separated out the cycling service, which opened as Ascent Cycles three stores down the street. In 2017, Scott rebranded Second Ascent as Ascent Outdoors.

“[Scott] is deeply affected by this, and to his credit, he paid all of his employees through their last days, as far as I know,” Turner says.

During its lifespan, Ascent Outdoors carved out a heralded space with outdoor enthusiasts for hosting hundreds of events and skills courses in partnership with local organizations like The Mountaineers.

“People want to hang out and get together in the evenings and learn about mountain stuff,” Summers says.. “This was [...] where the real climbers went — the actual climbers, not the general public who's trying to learn about the outdoors. They go to REI."

“The people that are true mountaineers and live that lifestyle, they don't have a place to go anymore,” he says.

Update: This article has been updated to reflect quotes from Ascent Cycles store manager Aaron Turner.