After I-940 passed last November, family members of police shooting victims were expecting to be involved in its implementation. Some say that isn’t happening. 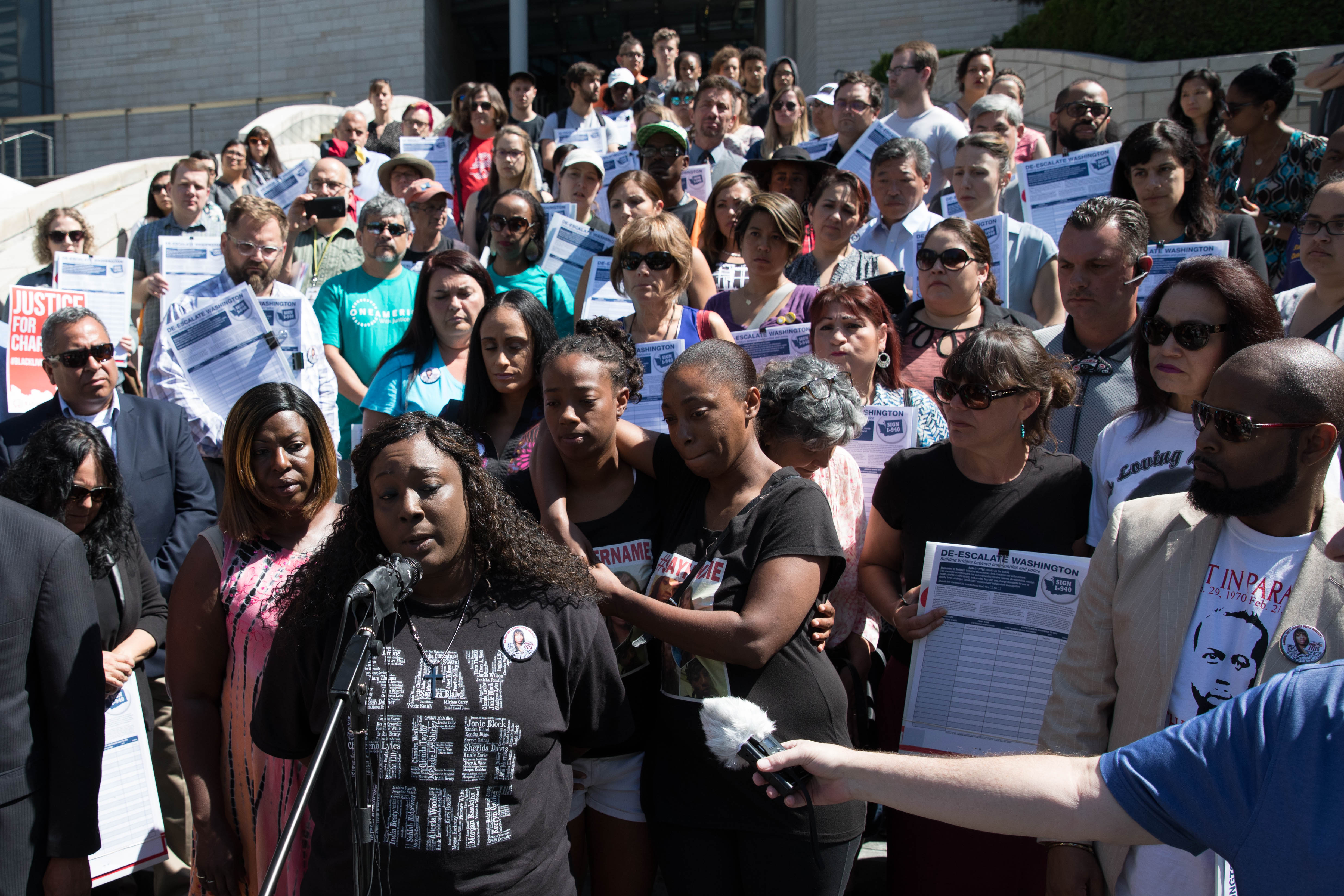 Katrina Johnson speaks at a rally for I-940 at City Hall in Seattle on Thursday, July 6, 2017. Johnson, whose cousin Charleena Lyles was shot and killed by Seattle police earlier that summer, is one of a number of police reform advocates raising concerns with the implementation of the police accountability measure, which passed last November. (Photo by Matt M. McKnight/Crosscut)

When Washington state voters approved a new police accountability law in November, advocates won a major victory. Now some of those advocates who lost loved ones in police shootings are raising concerns that state officials are rushing through the implementation process, and their voices aren’t being taken into account.

Meanwhile, the head of the state’s Criminal Justice Training Commission (CJTC), which has the task of devising new regulations required by the November vote, said her staff is scrambling to meet deadlines triggered when voters passed the measure, known as Initiative 940.

The aim of the initiative was to remove some of the barriers that have made it difficult to prosecute police involved in fatal shootings, including the requirement that prosecutors prove “malice” for an officer to be held criminally liable. One aspect of the resulting law requires the CJTC to create a new statewide curriculum for officers that is intended to reduce police violence. To do so, the commission must go through a bureaucratic process called rulemaking, which includes seeking public input and meeting deadlines for publishing the proposed rules. The CJTC will then develop curriculum based on topics outlined in the rulemaking process.

Now some police accountability advocates say that this requirement is not being met. In a letter sent Thursday, community stakeholders asked the commission to consider changes over wording about mental health and first-aid training, and asked commissioners to “commit to ongoing stakeholder involvement.”

The rule proposed by the CJTC “does not maintain the important relationships between community and law enforcement that we have established and that are proven to reduce violence and increase understanding,” according to the letter, signed by 22 groups, including ACLU Washington, NAACP King County-Seattle and the Yakama Indian Nation.

Some families who had campaigned for the measure were harsher in their assessment, pointing to aspects of the draft plan that they believe are not in keeping with the language of the initiative, and a process that, in the case of one mother, has not recognized the impact of her loss.

Fred Thomas, whose lawsuit over the 2013 fatal shooting of his son Leonard by a Pierce County SWAT officer resulted in a multimillion-dollar jury verdict, said he felt like state officials “were just going through the motions.”

“I honestly don't feel like we were taken seriously or our input was of any value to them,” said Thomas, one of several family members of police shooting victims who campaigned for the ballot measure under the banner of De-escalate Washington.

The dispute is just the latest controversy concerning the initiative. I-940 was first considered by the Legislature during the 2018 session, when lawmakers passed an amended version in an attempt to clarify aspects of the initiative, itself a hard-fought compromise between activists and police groups. The state Supreme Court later deemed that the application of the amendments was unconstitutional, effectively delivering the initiative to voters.

After the measure passed overwhelmingly at the ballot box this past November, it was again amended by the Legislature, with cooperation from initiative supporters. In February, Gov. Jay Inslee signed the amended legislation, starting the clock on what is being viewed by some as a very quick implementation.

Sue Rahr, director of the CJTC, said her staff is rushing to submit a draft that broadly outlines curriculum to address de-escalation and mental health training for officers by May 23. State officials have hosted  two public engagement meetings and four smaller meetings with stakeholders this year to seek input. The process, which Rahr said usually takes more than a year, will be finished when commissioners vote on the rules in June. The new training curriculum will begin early next year.

The Washington Council of Police and Sheriffs, which represents 4,400 rank-and-file police officers in the state, largely has been satisfied with the process so far, said council Executive Director Teresa Taylor.

Taylor said the deadlines put in place by the ballot measure have resulted in a hurried process, but she felt like her organization’s input had been heard. She said the council wants to see final rules that will “ultimately result in training people want to take,” Taylor said.

“This hasn’t been easy, but it’s worthwhile,” she said.

The rush has left some families feeling as if the commission staff is “checking a box” when it comes to the input of family members, said Katrina Johnson, whose cousin, Charleena Lyles, was killed by Seattle police in 2017.

“The stakeholders have complained to me, legitimately, this is happening too fast,” Rahr said. “We wish [we had] another year to do this, but I also understand that the stakeholders felt a sense of urgency to get this done more quickly.”

Johnson and others have floated the idea of creating a civilian advisory group for the commission, something not included in the ballot initiative language. In a May 1 email to stakeholders about the latest revisions to the rules, commission staff said if they had tried to create a civilian oversight body “we don’t believe we would be able to carry out our mission in a timely manner.”

“There’s been no good faith effort ... in actually accepting any of the community input," Johnson said.

One point of contention is how the state will implement the ballot measure’s charge that officers have a “duty to render first aid.” A draft of the rules circulated among stakeholders says only that officers be trained in “facilitating” first aid, which upset some family members of shooting victims.

Thomas said his son, whose death achieved particular notoriety after a police report described the sniper’s bullet that killed him as a “frickin' million-dollar shot,” bled to death and could have been saved.

“They just totally ignored the fact that we said someone should be given first aid after they're shot” he said.

Another item of concern is over the language in the measure that calls for bias and cultural competency training. Tim Reynon, a member of the Puyallup Tribal Council who campaigned for the the initiative's passage, said he wants the rules to name specific communities with “unique histories with law enforcement,” and create a mechanism for those groups providing input while the curriculum is developed.

“You can’t have a generic cultural sensitivity training and have it apply to every community of color you encounter as a law enforcement officer,” Reynon said. “You need to be able to understand the unique differences, and similarities, between the communities. We understand from the commission’s perspective it’s hard to identify everyone by name because we have so many communities in our state. The main point is we want people from those communities to be the ones who are participating in and advising the particular curriculum for those communities.”

Sonia Joseph said she felt cut out of the process entirely. Joseph said she skipped a March meeting of stakeholders at the CJTC campus in Burien because the former Kent police officer who shot and killed her son. Giovonn Joseph-McDade, in 2017 is now a trainer there.

“No. 1, I did not want to run into officer William Davis, the man who killed my son, and No. 2, I didn’t agree with the fact that he would be implementing the training,” Joseph told Crosscut.

Rahr said the CJTC had made a job offer to Davis before the shooting, and noted that he was cleared of any wrongdoing. Davis did not attend the meetings with stakeholders, she said.

“All the information we have about that shooting, even though it’s terribly, terribly tragic, is all his actions were appropriate under the law, so it was inappropriate to withdraw his job offer,” Rahr said

There will be a public comment period after the draft is submitted to commissioners later this month. In the case of the wording about first aid, Rahr said, the commission was trying to walk a line between the ballot measure’s wording and concerns from law enforcement groups that the rules could preclude medics from rendering aid. She said Monday that the wording could be changed to allay Thomas’ concerns.

After the commission’s vote in June, another rulemaking process will begin to address the initiative’s requirement for independent investigations of police shootings. That process, which must be finished by December, will likely resurface concerns surrounding the  rendering of first aid to shooting victims.

“I think it’s working in the sense that there are significant representation of community groups at the table,” said Leslie Cushman, an attorney who was I-940’s citizen sponsor. But Cushman offered the caveat that communities of color and families of those killed in police shootings have not historically had much opportunity to give input in police training and policy.

“I want to be clear if there are family members that feel it’s not working, then I need to listen to that,” Cushman said.