Why I'd rather be sunless in Seattle

The climate is changing, and I can feel it in my bones. 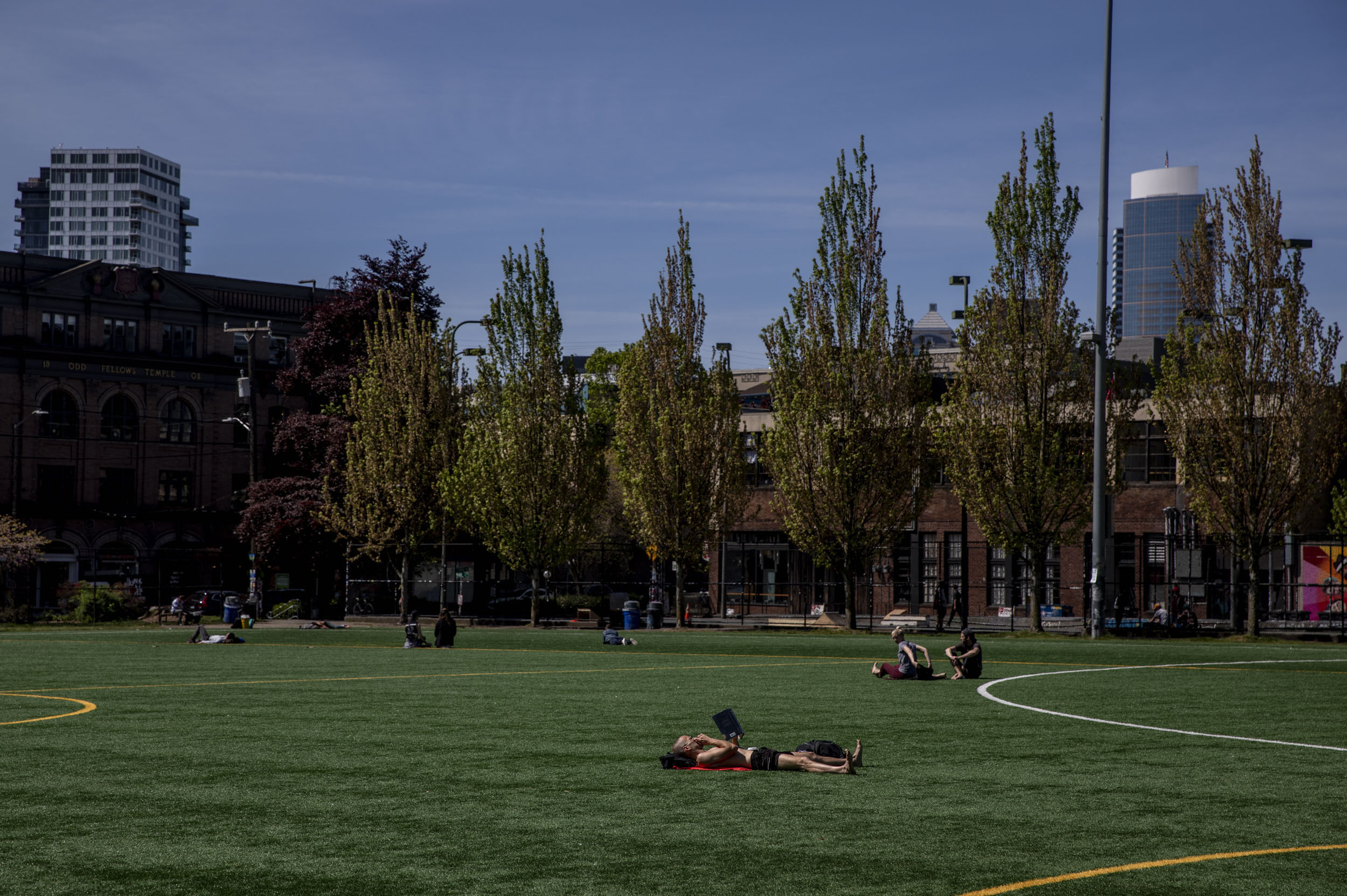 Cal Anderson Park on May 7, 2019. (Photo by Dorothy Edwards/Crosscut)

We are like the proverbial frogs in a pot of water being brought to a slow boil and some of us are uncomfortable.

Yes, I’m talking about the weather — including the current hot spell.

You can argue about the speed of climate change and how catastrophic it might be. But the climate is changing, weather norms are shifting, and it has been going on for a long while.

Global warming is part of an ancient pattern. Kirk Johnson, who hails from Bellevue, is a paleobotanist, author and the director of the Smithsonian’s National Museum of Natural History. Johnson has been overseeing a major remodel of the Smithsonian’s fossil exhibits that will look at the earth’s history and the impacts of humans on its present and future, including climate change. The new exhibit opens this June.

Lecturing at Johns Hopkins University last week, Johnson laid out the historical pattern (you can watch his lecture here). Humans have evolved during a cycle of the earth being cool or cold. Cool is the climate during that last 10,000 years or so when the glaciers melted and retreated; cold takes us back to the times when ice covered Seattle and much of North America. The ice sheet over Seattle 16,000 years ago was over 3,000 feet deep.

For millennia the pendulum has swung between massive ice sheets and the more habitable cool earth climates during which people and agriculture have thrived. It has swung back and forth every 100,000 years or so for the past 800,000 years, Johnson says. The amount of carbon is a factor in the warming and cooling trends: more carbon tracks with warmer; less carbon equals cooler. But already by the late 1950s, the level of carbon in the atmosphere was at unprecedented levels in the history of Homo sapiens. We are, Johnson says, living in unique times for our species. In other words, we were born into a warming-but-still-cool world with more carbon than any generation before us.

And carbon is going sky high, moving the planet toward levels that could eventually get us to the prehuman earth, which was often a hot-house when places like the poles and regions like the Pacific Northwest sprouted massive palms.

The weather is a frequent reminder that changes are happening. This winter was way warmer than normal, and a number of records were set. March, for example, was a record-breaking warm month. Seven of Seattle’s 10 hottest days have happened in the past decade. And eight of our 10 coldest days since the 1890s occurred in the 1950s. Something is different, something feels off, at least for us old-timers. Wildfire smoke choking the region’s cities a couple of summers in a row is one clue. This weekend, we’re told Seattle might hit record-setting hot days for May — in the 80s! Ugh.

It’s easy to look outside and see a sunny day and think: Fantastic, this is what it’s all about. But my body is adjusted to climate and weather that is rainier, cooler, damper. I feel physical discomfort in the heat, but also a sense of unease. What about the snowpack? What about the water supply? What about the salmon that are literally being cooked to death, like the frogs?

I’ve been nurtured by a somewhat colder environment, and I suspect there might be a genetic component (Harvard and MIT scientists say climate is believed to be a factor in human genetic adaptation). My recent 23andMe DNA breakdown — an analysis of my ancestry and genetic makeup — has been adjusted as more genetic info has come into its user database. The current results suggest my DNA resonates with climate conditions adapted to by my ancestors.

Many years ago I visited Scotland and was shocked to see some curly haired, blue-eyed, stocky people who looked a lot like me. I had a sudden revelation: I come from somewhere. This was somewhat confirmed by a physical therapist who worked on me and was struck with how naturally tightly wound my tendons were. She said that yoga would likely be dangerous for me. With my physique, she concluded, I would have been a natural manning a shield wall.

Wind, rain and sea. It’s no wonder my ancestors wound up here. It felt like home.

I would be happy in temps between freezing and the mid-50s. I sweat when it’s over 60 degrees, I complain at 70 and whine at 80. The fact that it is warming makes me fantasize about being a climate refugee — no easy thing in a warming world, where the ice in the Arctic, Antarctic and Greenland is melting rapidly.

So I am thinking of chilly tourism, the opposite of those “sunbird” Seattleites who flee to Palm Springs or Maui when it’s winter here. Last summer it was Haida Gwaii in British Columbia, where there was no smoke and it was cool while Seattle sweltered and choked. Haida Gwaii is not sheltered from climate change, but I still check it on my weather app. I noted that on Tuesday it was 49 degrees and cloudy on Graham Island, with possible showers and a high of 55 expected. Sweet.

My current getaway fantasy is the Faroe Islands in the Atlantic between Norway and Iceland. In mid-summer, high temps average a blissful 55 degrees! The lows are in the mid to upper 40s. It looks to be a rocky, windy, foggy, green landscape, like something out of Game of Thrones, remote islands where a mild winter comes year-round.

Cold climate tourism: Maybe it’ll be the new thing for those of us who feel uncomfortable in our bones with the new reality.