The Beacon will screen everything from art house films to second-run releases. 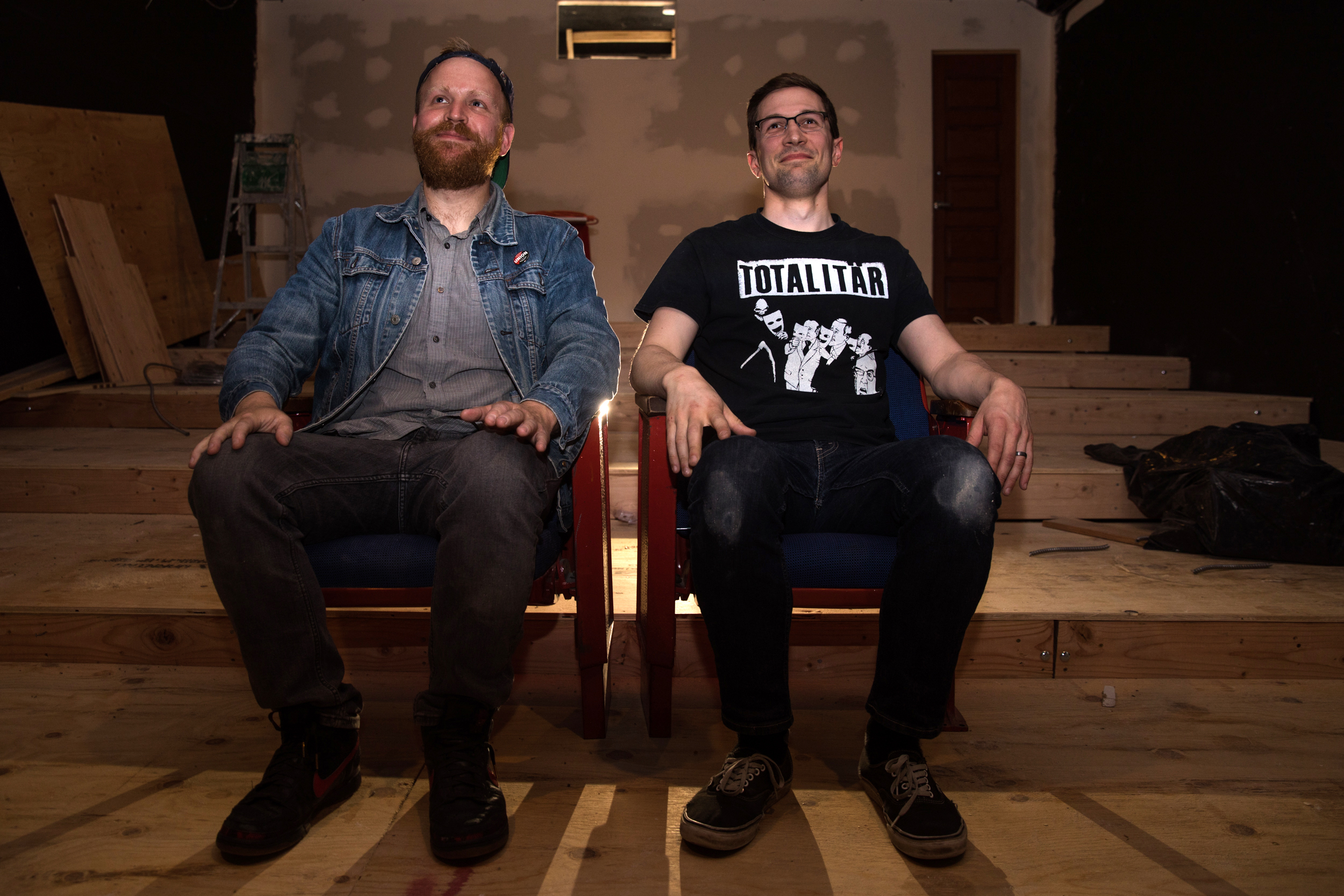 Casey Moore and Tommy Swenson, founders of The Beacon in Columbia City, sit for a portrait in what will soon be their movie theater. They plan to open on July 19. (Photo by Matt M. McKnight/Crosscut)

Casey Moore and Tommy Swenson should have met a long time ago, but instead they’re coming together now to establish The Beacon, a single-screen repertory movie house in Columbia City. It’s set to open in late July.

Sitting in the unfinished lounge of the new theater on Rainier Avenue South, while Moore’s dad builds tiered seating in the next room (formerly the Tiger Lily Yoga studio), the two friends reminisce about the lifelong dream of opening up an independent theater.

One wall, they explain, will be covered with wallpaper depicting a scene from Chris Marker’s masterpiece, La Jetee (1962), one of Moore and Swenson’s favorite films.

Over here is where the concession stand will be built. They’ll serve beer, wine and other snacks, including the quintessential movie theater popcorn.

The Beacon will screen everything from silent black and white films to second-run movies. It’ll program horror and foreign films and movies according to themes — suburban life and homelessness, for example. Swenson and Moore say they want to give their audiences an opportunity to look at subjects and societal issues in a different light.

The Beacon, they say, will remind people how fulfilling it is to watch a film on the big screen. (Theirs is 14-feet wide.) They believe the move toward streaming services like Netflix and Hulu takes away from the communal experience of watching movies at theaters.

“It was something you could be a part of,” says Moore about the experience of going to a movie house. “There was just so much to see.”

The two 34-year-old film buffs grew up in the U-District when independent movie theaters thrived in the neighborhood.

“There was a ton within walking distance,” Moore recalls. “What we really bonded on was just what a world it opened up to us.”

Swenson and Moore lived and breathed movies and on any given night they could choose between the Neptune, Guild 45, Seven Gables, the Grand Illusion, the Varsity, the Metro — or rent a film from Scarecrow Video or Cinema Books. More than half of those venues are either closed or no longer independently owned.

Moore is tall, dark-haired and wears black rimmed glasses. He sports a Totalitär shirt, a Swedish punk band from the ’80s. Soft-spoken Swenson is anything but shy. He points out the blue sweater he’s wearing, featuring two gay sumo wrestlers from the Fantagraphic manga Massive.

Since their late teen years, the two film aficionados have had dozens and dozens of opportunities to cross paths. Like a scene from a quirky comedy, the two most likely missed each other by mere moments over the years.

Swenson, for example, went to work at Scarecrow Video as soon as he turned 18. He says he would’ve worked there sooner, but they kept telling him they couldn’t hire a minor because they rent pornographic videos. Around that same time Moore was a frequent Scarecrow customer, likely renting obscure films during Swenson’s shifts.

“We've realized how many of the same shows and screenings and various things we were at and just didn't know each other,” Swenson says.

“Including the show where I met my wife at age 16 — seriously — totally,” Moore replies, bewildered.

The pair went on to have successful careers in the cinema industry.

Swenson worked at the Grand Illusion, the Northwest Film Forum and, eventually, would be in charge of programming for 34 theaters in the Alamo Drafthouse Cinema chain in Austin, Texas. Moore graduated from the University of Washington with a degree in film studies and went on to work as the marketing director of The Criterion Collection in New York City, which redistributes classic cinema films. He now owns his own film and television marketing company, High Council.

But their love for movies — and their acknowledgement of cinema’s emotional power — goes even further back than their juvenile cinematic exploits.

Moore recalls how Fantasia “melted” his toddler brain when he first watched it. And when the witch in Sleeping Beauty transformed into a dragon Swenson had to run behind a wall. Similarly, when Moore watched Jurassic Park in theaters with his dad, he left when the Dilophosaurus spit acid onto Dennis Nedry’s face (everyone's favorite I.T. guy).

“Cinema is unique in how it handles time. … It’s almost like witchcraft, where it’s bringing the past, mediating it through the present and using that to create a future through the process of viewing,” Swenson says. “That’s sort of my philosophical approach. My other approach is that it’s just fun.”

“When you're in the hands of a master filmmaker it’s just the best; it can be so transcendent,” Moore says.

The two eventually met in 2016 at an Austin crawfish boil after attending a film panel at SXSW. They’ve been friends ever since.

Last December, Moore was looking for new offices for his business when he stumbled upon the Columbia City location and thought it was perfect, but then he realized the listing included the yoga studio as well.

“I was like, ‘Oh my God, I can finally do a movie theater,’” he says. “It had been a dream of mine for so long to have a little neighborhood place where we could run our own movies, and then I got to talking with Tommy.”

Moore estimates he’s spent $60,000 on the AV projection screen gear and the audio sound systems, with an additional $15,000 for building materials and other administrative costs.

“It’s one of those things that I don't think in a city that's changing this rapidly you get too many opportunities in a space like this,” Moore says. “It was like a ‘[expletive] it, let’s do it’ moment.”

The Beacon is named in honor of how cinema has steered the course of their lives and opened doors to new worlds.

“It’s all about discovery,” Moore says. “So that people can really get in the spirit of wanting to go back to the theater and see something new that they don't know.”

One of the Beacon’s first screening will include the newly restored edition of Streetwise, the controversial 1984 Seattle documentary by Martin Bell and Mary Ellen Mark that follows Tiny, a homeless 14-year-old sex worker.

“As a portrait of homelessness, it’s a really interesting contrast to the situation today,” Swenson says.

One of The Beacon’s first film series will be titled “You only moved the headstones: The unburied violence of suburbia.” Movies will include Blue Velvet, Poltergeist, The Burbs, and the Australian film Cecilia, all movies Swenson says highlight the underbelly of the suburbs.

“[It’s] something built on exclusion and when a place is built on borders and exclusion, what seeps back in?” Swenson asked.

So far the duo has received only positive feedback and support from their local and national film networks, but the reality of a shrinking movie theater scene haunts them.

Moore and Swenson aren’t worried though. They think their approach is fresh and exciting and they hope to do cross promotion and partnerships with local organizations. They both say they’re trying to make the theater as inclusive and inviting as possible, with in-depth blurbs on their website and content warnings that are more helpful than movie industry ratings. (Their in-house ratings will let audiences know about triggering or uncomfortable themes in films ahead of time, like mental health issues or sexual assault.)

“We want to be part of the block; we don’t want to stick out on the block,” Moore says. The Beacon will be sandwiched between Southern Exposure Catering and Hodges Hair Quarters.

Tickets at The Beacon will cost $12.50. The theater will seat 50 and have two show times Monday through Thursday, three on Friday, and four to five on Saturday, although it may ultimately add more.

“A lifetime of preparation for six months of hard work,” Swenson says.

The Beacon is set to open July 19.