After a meager presidential bid, Jay Inslee looks vulnerable in his run for a third term

Gov. Inslee failed to build momentum around climate change. What's that mean for his reelection prospects back home? 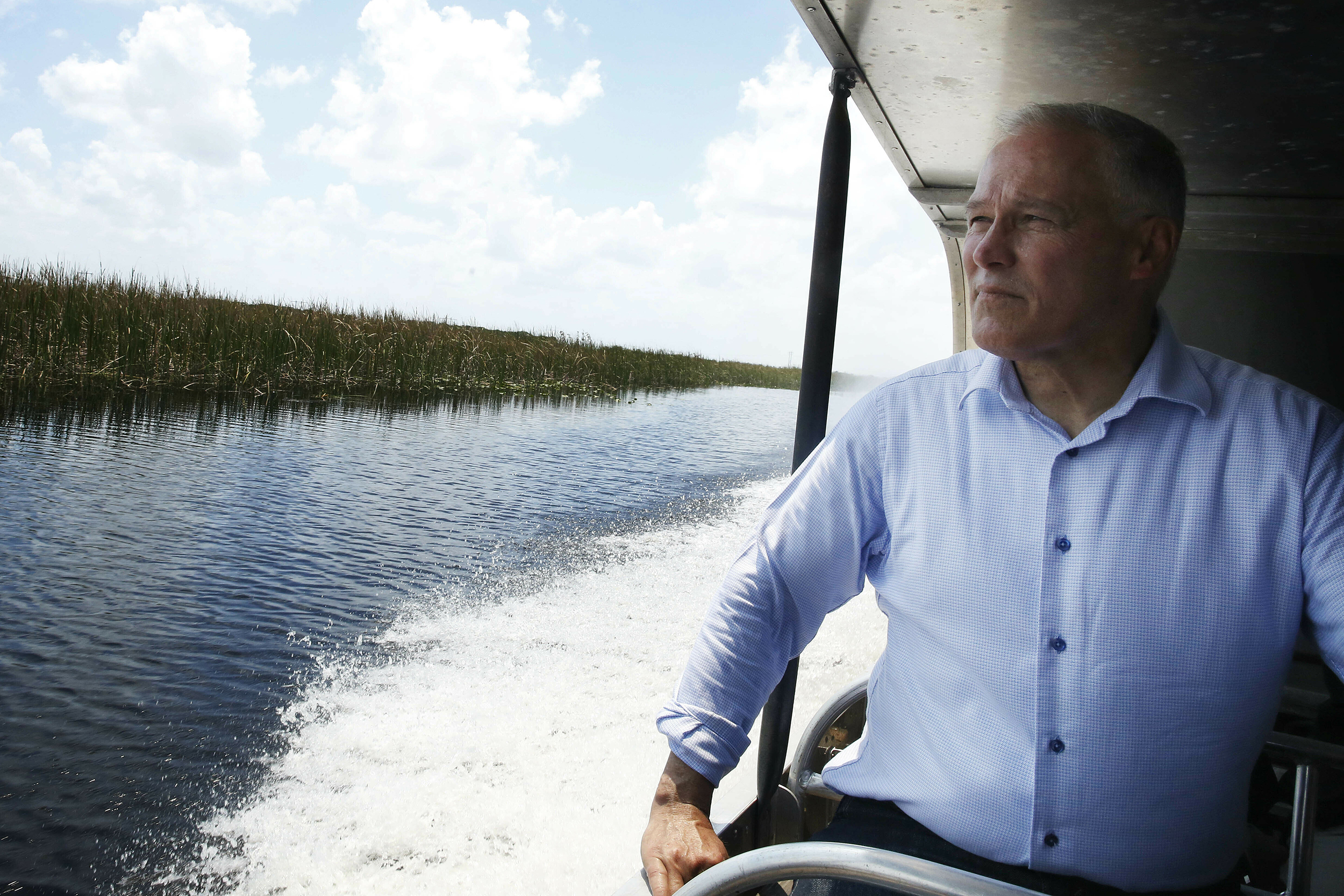 What to say about a campaign for president that never took flight? If you like Jay Inslee, you downplay the results and praise him for “elevating the climate crisis to the top of the agenda within the primary,” according to the League of Conservation Voters. Seattle’s representative in Congress, Pramila Jayapal, spoke for many when she praised the governor for shaping the debate in the 2020 race.

But did he, really? A stronger case can be made that he did the opposite.

Inslee certainly went all-in on the climate change issue. He correctly gambled that it would generate lots of friendly attention from national media outlets, from the Washington Post to The Atlantic, and lots of appearances on liberal-friendly cable TV (MSNBC, CNN) and the legacy networks. A commitment to climate change helped him raise a respectable amount of money to keep his campaign rolling. But after all of that, where did it leave him? Among Democrats — not voters at large, but the voters in his base — he went from 1 percent in the polls in late spring, to an asterisk following the second debate, to zero in the latest CNN poll. After four months of steady campaigning, the candidate had only 1 percent, and then he went backward.

And that puts climate change on the front burner? No. What Inslee inadvertently proved was the opposite: that there really isn’t much enthusiasm about climate change as a political issue among voters. Not even among Democratic primary voters. Consider that the two candidates advocating the loudest for climate change solutions were Inslee and former Texas Congressman Beto O’Rourke. Inslee is out and O’Rourke is headed that way, having lost more support than any other candidate running. Meanwhile, the leading candidate least associated with climate change, Joe Biden, actually jumped in support after Inslee attacked him during the second debate for being insufficiently committed to zeroing out fossil fuels.

True, the other candidates now include paragraphs in their stump speeches about the “climate crisis” to ensure audiences that they care about the issue as well, but most of them keep their message broad and safe. There’s a reason for that. When “climate change” evolves into an actual agenda, at least on the political left, it usually means higher gasoline prices, or higher home heating costs. And voters don’t want that. Not in the United States, not in Canada, not in Australia, certainly not in France. Even here in progressive Washington, voters turned thumbs down on the idea by 13 percentage points, arguably because they figured out that the advertised “carbon fee” on industry translated into higher prices at the pump and at home.

What about revenue-neutral ideas like a carbon tax with reductions in existing taxes? It actually made the ballot in Washington a couple years ago, but left-leaning Democrats (like Inslee) opposed that idea, because they want climate change solutions that produce fresh streams of revenue for government to spend.

So until someone can articulate a climate change agenda that proves popular with voters, climate change will not be a major issue in the race for the presidency in 2020. If it is, it will likely benefit Donald Trump, who vocally opposes higher energy prices on working class Americans, and advocates for their livelihoods in the energy sector.

But enough about the other Washington. What does Inslee’s exit and unusually swift announcement that he’s running for a third term as governor mean in Washington state?

Excitement matters in politics. There is no longer any excitement about Inslee, not even among Washington Democrats. Only 6 percent of them favored him for president, preferring four other candidates — Biden, Bernie Sanders, Kamala Harris and Elizabeth Warren — instead. Had he not instantly announced for a third term, Attorney General Bob Ferguson was ready to jump in, and with him a fresh breeze of enthusiasm blowing in from Puget Sound. Ditto for Hilary Franz, the articulate, charismatic and skilled Commissioner of Public Lands, who promises to play down partisanship to get things done in Olympia.

But Inslee running for a third term might actually make him more vulnerable — to the extent a Democrat can be vulnerable — in a statewide contest. Yes, he has solid name recognition, he’ll have plenty of money and a united front of key Democratic bases behind him, from government unions to the tribes, to the trial lawyers and abortion rights lobby and, of course, many environmentalist groups. But now he’s saddled with two pieces of baggage that weren’t there four years ago. The first is that a third consecutive term for governor is unusual — it’s happened only once, 48 years ago, when Dan Evans won a third term, and that was in a race with a former two-term governor also seeking a third term.

Second, and arguably more important, Inslee spent much of the last six months trying to land a better job. While Inslee told reporters yesterday he’s not interested in a Cabinet position, it seems clear his heart is in Washington, D.C., where he served 16 years in Congress. Will he pledge not to run for president or accept any other job in the capital while serving a third term? He should be pressed on this point.

A parting lesson from history about third term campaigns: In 1964, Dan Evans ran for his first term as governor with Barry Goldwater on the ballot, the least popular Republican nominee of the post-World War II era. Goldwater only won six states that year. But Evans, an accomplished legislator from Seattle back when Seattle elected Republicans to the Legislature, defeated incumbent Democrat Al Rosellini, who was seeking a third consecutive term, by 12 points while Democratic President Lyndon Johnson was beating Republican Goldwater here by 24 points. Third terms are a deceptively steeper climb for governor than third terms for other statewide and local offices.