Lime bike batteries have been catching fire in Seattle. Should you be worried?

Officials say they are also seeing an increase in fires related to lithium ion batteries used in other products. 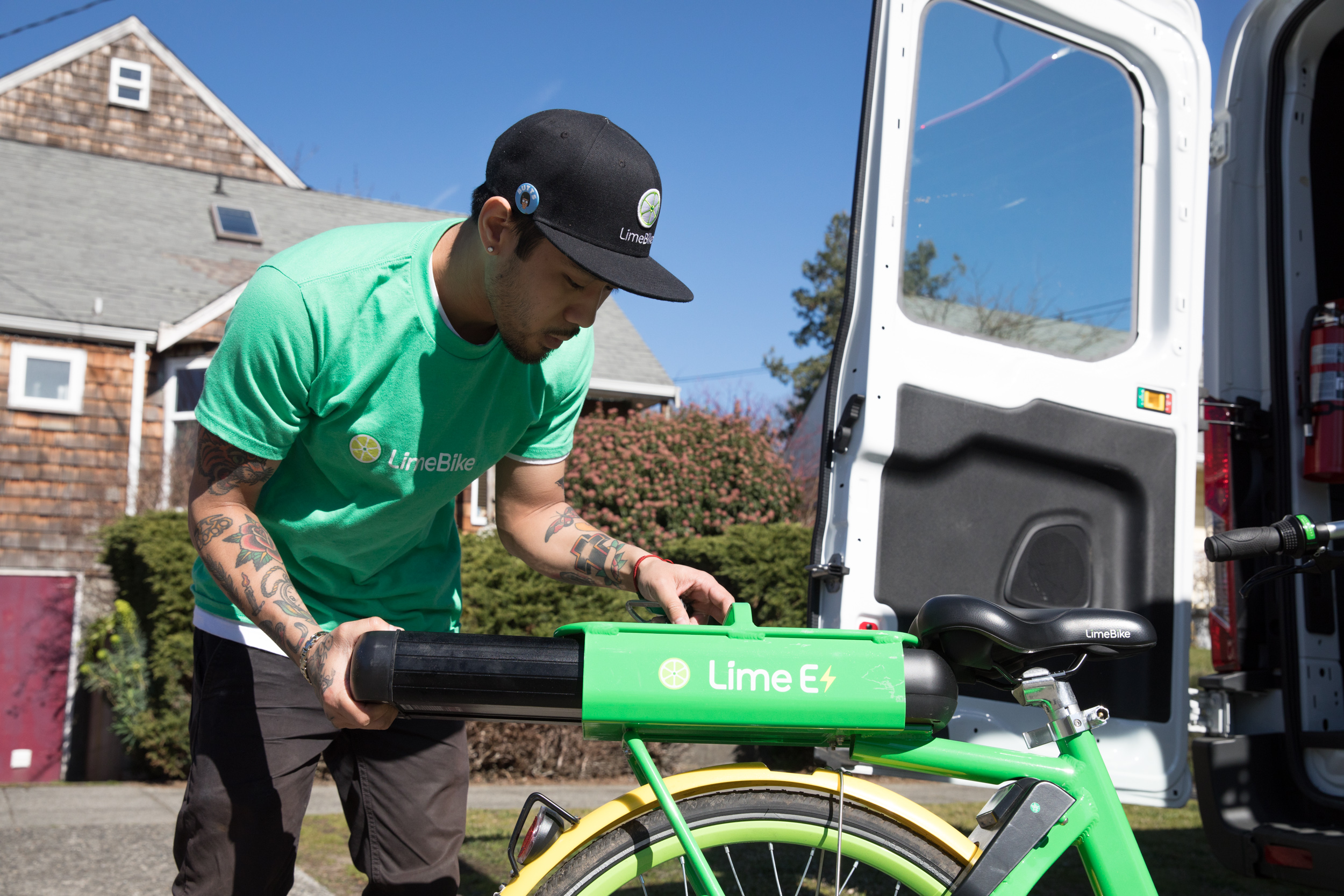 E-bike battery fires are rare, and far from the biggest threat to the micro-mobility revolution happening on Seattle streets. But while fires used to be discussed like urban legends, two incidents this week with Lime bike-share bikes in Seattle have renewed public safety concerns.

According to Dawn Schellenberg with the Seattle Department of Transportation, these are the first instances of bike-share battery fires in Seattle “of which we’re aware,” she wrote via email Friday. “The vendor Lime is looking into the cause of the fire, and we’ll continue to work with them.”

A Lime spokesman told Crosscut that, to his knowledge, these are the first fires associated with Lime bikes in Seattle and Washington state.

There are currently between 4,700 and 5,700 free-floating bike-share bikes in Seattle. Users took approximately 287,000 trips in July.

In recent months, bike-share bike fires have caused fleets to shut down elsewhere. Two weeks ago, Lyft pulled its entire San Francisco fleet from the streets just two months since introducing them, after two batteries caught fire. A March fire at a Citi-Bike warehouse hub in New York City caused a number of batteries to catch fire.

It’s also not the first time this summer that Lime has had an issue with its bikes, known as Lime-E’s. A battery caught fire in New York City on July 25, giving its rider first-degree burns. Lime attributed the explosion to vandalism.

The company also makes scooters and pulled an undisclosed number of them from use in November 2018 because of concerns about battery fires. In Washington, Lime operates scooter shares in Tacoma, Redmond, Everett, Spokane and Bothell. In May, Mayor Jenny Durkan expressed conditional support for scooters in Seattle but noted that concerns about "safety, fairness to riders, protection of taxpayers through full indemnification, and equity" needed to be addressed before a pilot program could be introduced.

The chemical fire response team removed the batteries from the facilities after dousing them with dry chemical extinguishers. It put the batteries in an open outdoor space, where they may have caught fire again.

While a Lime spokesman told Crosscut the batteries didn’t reignite, Seattle Fire says they did.

“We did remove all the battery packs and cells inside the room and moved them outside as a precaution,” Cuerpo says. “A second ignition did happen, but we don't know how many of those batteries were completely destroyed.” Public records received in September show the burned batteries reignited at the exterior location a few hours after removal.

Lime's spokesman countered saying, the batteries might have ignited in the building but once they were moved outside of the building they did not reignite.

The company, he adds, is disposing of the affected batteries in a “proper recycled way,” and that the company’s operations aren’t going to be impacted. Addressing safety concerns, he notes the company has a full-time operations team trained to monitor, track and spot-check bikes, conducting the checks nightly at the warehouse.

About 20 to 30 firefighters responded to the incident, and a monitoring crew stayed through 1 a.m. Cuerpo says there was no chemical hazard to the community.

The news comes on the heels of Lime’s Wednesday launch of a Lime Patrol team, who are tasked with helping educate riders about proper parking etiquette throughout the city.

A Lime spokesman said part of the patrol employees' job responsibilities include spot-checking bikes while moving and relocating them.

Across town the same evening as the warehouse fire, a single bike caught fire at the University of Washington, just off of Stevens Way west of Hutchinson Hall, says Maj. Steve Rittereiser of the UW Police Department. Campus police received an alert about the fire at 9:14 p.m., which gained attention on Reddit after a user shared a video.

"Officers responded and found there was a Lime bike that was on fire, and we used a fire extinguisher to essentially put most of it out, and the fire department arrived shortly thereafter and assisted in putting it out as well," Rittereiser says. He doesn't believe the department has ever responded to a bike on fire before.

The cause of the fire is still unclear, but UW officers didn't notice any sign of vandalism. "The fire seemed to be coming primarily from the battery pack, and our officers preliminarily said that there was no sign of foul play," Rittereiser says.

However, a Lime spokesman says that the company believes otherwise, calling it an isolated incident. Upon Lime's initial investigation, he said, the company has found no reason to believe the incident was anything other than vandals tampering with the bike battery. He says the company has "exceptional knowledge" of the issues with its product and is working with local authorities regarding both incidents.

UW Police did not write up an incident report, but did note arrival and departure times, Rittereiser says.

The same model of battery was involved in both incidents.

Seattle Fire’s Cuerpo says the department has seen an increasing number of lithium ion battery incidents. “Within the last six weeks we’ve had an abnormal number of fires created by either charging devices or by lithium batteries found in many portable electronics, including phones,” he says.

Asking people to learn to identify signs that a bike battery might be liable to explode beyond conspicuous vandalism would be difficult. However, Cuerpo says Seattle Fire is working with SDOT on safety messaging around what to do if you wind up on a bike that is having an electrical issue.

“If people are riding or operating any electric device, scooter or e-bike, if you notice abnormal heat or any fumes or smoke or flame, immediately get off of it,” he says, and move 25 feet away. Call 911 to handle the issue and notify the company and anyone else you see in the area. "The key thing for us is, along with that safety message, do not use water [to put out a chemical fire]. Water can spread chemicals.”

Samantha Herr, executive director of the North American Bikeshare Association says the trade group is aware of these incidents.

“[Battery fires] are rare, but obviously a concern as we see the popularity of this equipment resonating with the public," Herr says. "Consistent with NABSA core values of safety and transparency, we encourage operators to be swift in their response and transparent in their communication with users.”

Lime is not a member of NABSA.

"Li-ion" batteries revolutionizing portable energy storage by offering reusable batteries that are light, have high storage capacities, can charge and recharge faster than alternatives like NiMH batteries and are stable across a broader temperature range.

"The value proposition for using Li-ion is pretty straightforward," says lithium-ion battery expert Robert Masse, PhD, via email. Masse is the co-founder and CEO of Astrolabe Analytics, a Seattle-based software company focused on renewable energy storage. "It checks off the minimum requirements for performance and cost, and beats out its competitor technologies on a few other dimensions."

But lithium ion batteries have been known to short-circuit under high heat, when penetrated, when paired with bad software or when their high-density cells come into contact with metallic dust. Trouble with lithium ion batteries led to Samsung’s voluntary recall of 2.5 million Galaxy Note 7 smartphones in 2016 after at least 35 phone batteries caught fire.

"As a battery person, I am biased on the subject [of safety], but I think we are just going through a phase in the maturation of battery tech," Masse says. "Costs have come down considerably in recent years... and in some cases this means that batteries are going into products where the market is moving faster than best practices for battery safety (there are plenty of unfortunate examples here)."

Bike-share batteries like those seen in the video posted to Reddit explode in waves, like trick birthday cake candles. This is because their battery packs hold 16 to 20 individual cells, Cuerpo says, separated by metal and plastic housings. As the casing melts, cells fall out and expose others to flames, like dominoes.

SDOT’s Schellenberg says it’s too early to say whether the incidents will impact bike-share operations. “We will continue to monitor the safety of Seattle’s bike share fleet. It is too early to say how this might impact permitting,” she wrote. “We don’t have any new bike share regulations planned. We'll determine if updates are necessary before issuing permits for 2020.”

Update: We changed language to reflect that the Citi-Bike fire did not cause bikes to be taken out of service, but batteries; and on Monday at 11:37a.m., added new quotes from reusable battery expert Robert Masse. We added in new quotes from Samantha Herr, executive director of the North American Bikeshare Association, at 12:01p.m. on Wednesday, Aug. 21. On Sept. 17, we updated the article with two new pieces of information from a public records request.

Mayor Ed Murray, front, takes part in a ride to celebrate the launch of a bike-share program. 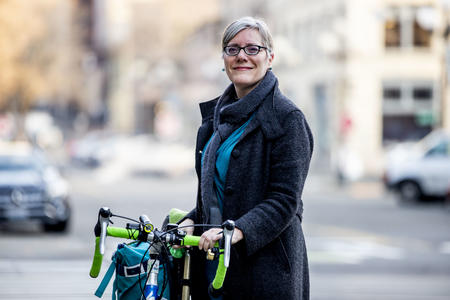 Can this woman save biking in Washington state?

Cyclists say our bike infrastructure leaves much to be desired. WSDOT's Barb Chamberlain wants to fix that.

Mayor Ed Murray, front, takes part in a ride to celebrate the launch of a bike-share program.

Can this woman save biking in Washington state?

Cyclists say our bike infrastructure leaves much to be desired. WSDOT's Barb Chamberlain wants to fix that.