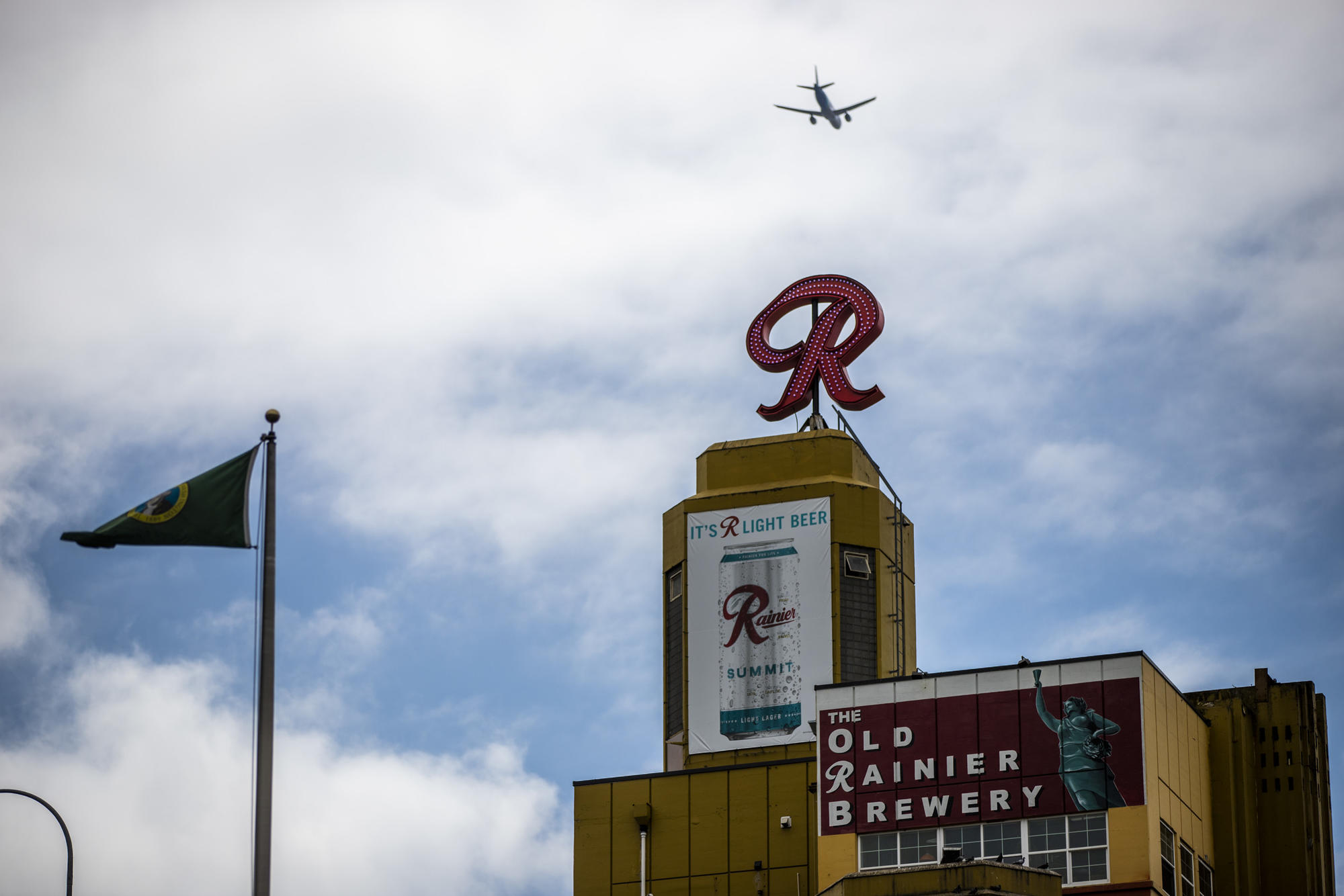 The Old Rainier Brewery in Seattle on July 30, 2019. (Photo by Dorothy Edwards/Crosscut)

In the Northwest, brands of yore are having a renaissance. The Seattle outdoor clothing company Filson, which has been around since the Klondike Gold Rush, in recent years has expanded its retail stores, relocated, modernized its SoDo “flagship” and its product lines, and made itself appealing to a new generation of bearded millennials who can afford to shop by Filson’s old slogan, “Might as well have the best.” Its chief executive officer has called the company, founded in 1897, “a start-up” as it renews interest in classic materials like cotton, canvas, leather and flannel, as opposed to Gore-Tex and Velcro.

The launch this fall of the new Cosmic Crisp apple is a variant of a rebranding as well. It’s a massive marketing campaign for a new apple variety invented by Washington State University, but is reportedly getting the largest apple variety rollout in America. It effectively seeks to replace the longtime bestseller and visual Platonic ideal of an apple, the Red Delicious. If apples are the official state fruit, the Cosmic is now entering the state in a 21st century galactic guise that marries flavor, name and appearance — and appropriately greets a new generation of high-tech space entrepreneurs. Crosscut recently received a sampling of Cosmics and the packaging resembles the kind of box in which you might find a new laptop. The rollout had been said to be as important as that of a new iPhone.

Both Filson and apples carry the weight of nostalgia and identity, but they don’t hold a candle to the beverages we imbibe that make us feel the Northwest is truly a part of us: beer. They command surprising brand loyalty, especially from those who started drinking at high school keggers or watched our fathers down six-packs or giant King Beers at the Kingdome way back when.

Today, many of the old classic Northwest beers aren’t made here anymore. The Old Rainier Brewery building has restored the familiar “R” logo on its roof in SoDo (the original is a centerpiece of the Museum of History and Industry’s main gallery). Though the beer is now made elsewhere, it lives on in hats and jackets and minor league baseball swag — and, of course, in Seattle’s hippest bars, where you can order a tallboy of “Vitamin R” and where you just might find the beer hoisted by arms decorated with the popular “R” tattoo.

The Seattle ad agency DNA is reviving a Rainier campaign from the ’70s and ’80s, one that featured beer bottles with legs running through town and forest as “Wild Rainiers.” (One of the legged bottles remains captive at MOHAI.) Please note this: One of the most interesting facts about Seattle Mayor Jenny Durkan is that she was once a Wild Rainier herself. You can’t get a Seattle credential better than that, except by maybe doing something incredibly humiliating on your “senior streak” after imbibing the better part of a six-pack of Rainiers’ classic “Green Death” ale. May your reputation rest in peace.

The new campaign aims to show that Wild Rainiers have been domesticated over the years, hanging out in gyms or boardrooms. But a group is liberating them and setting them free in the wild, perhaps somewhere near Mount Rainier. This is an appeal to the Amazon generation (naturally, GeekWire has a story): skip work and do something Northwest crazy, like go into the woods on Amazon Prime Day. Throw off your lanyards, dump your scooters and get out! The hope is to attract young people with humor and quirkiness and convince newcomers that they can guzzle local culture and be in on the joke. This is partly a response to the proliferation of craft brews, which Rainier decidedly is not.

I recently came across another old beer brand up in Chimacum: cold cans of Olympia sold in a market. I was headed to Port Townsend for the weekend and bought a couple. I cannot tell you the sense of rightness that overcame me as I sipped an Oly while gazing over the Strait of Juan de Fuca one lovely evening. Yes, I know the Olympia Brewery in Olympia is moribund, and the beer brand is owned by Pabst (as is Rainier) and brewed in Los Angeles. But still, the stubby bottles, the Oly “O.” Those jingles and slogans are still in my head: “It’s the water … and a lot more.” Olympia, the first beer I drank legally, so there’s a little coming-of-age attachment for me, too.

But there is a rather delightful and epic story of revival connected to the brand’s history going on in Olympia right now. A craft brewpub called Well 80 is going old school. Restaurateur Bob Knudson, son Chris and head brewer Paul Pearson have situated this establishment on top of one of the town’s legendary artesian wells, which bubbles up under the floor at the rear of a warehouse they acquired to locate their brewery and restaurant. It was the amenity that sealed the deal.

The old Olympia beer was famous for its artesian water supply, which is why the original brewery located in nearby Tumwater. It is water from an aquifer that naturally bubbles up — it doesn’t need to be pumped. It is considered to be purer, with fewer minerals. A 1939 survey identified 96 artesian wells in and around the area, many built over or capped. The Well 80 team got permission from the city to use theirs, Well #80, for brewing beer.

On top of that, the team connected with one of Olympia beer’s retired brewmasters, Paul Knight, now in his mid-80s, and dug into the handwritten notebook of Olympia’s original owner and brewer, Leopold Schmidt. They found Schmidt’s original recipe (in German) for a lager first brewed in 1896, which probably hasn’t been tasted since Washington went dry in 1916. It’s made with mostly local hops, a few German ones and artesian water. And they just rolled out what they’re calling “Leopold’s No. 1 Lager.” It’s fragrant, golden and a bit stronger than old-school Olympia, as many beers were before Prohibition. It launched just this month.

The pub — really a full restaurant and brewery with outdoor and alley seating, as well as a capacious interior filled with Olympia beer memorabilia — features a gallery of photographs of celebrities such as Jack Nicholson, Clint Eastwood and Kurt Cobain either drinking Oly or wearing Oly swag. An original “It’s the Water” billboard fills one wall, the kind of sign that might have been hung on a barn. A TV screen in the bathroom plays a loop of ’90s TV segments interspersed with classic Olympia beer ads. The brewery has also experimented with other old recipes, including one based on Oly’s 1964-era lager and a bock beer that sold out quickly.

If consumers feel bonded to beer brands in the Olympia area — including Tumwater, where the old breweries were — the town is deeply connected to Oly’s past with many former employees and family members still residing in the community. The Olympia Fire Department’s logo uses the exact same lettering as Olympia beer’s. There is a long-term effort to restore and save the 1906 brick brewery and tower and convert it into a community gathering place. A foundation preserves many old company records and much of its history.

Brand nostalgia can be a gimmick. It can also rejuvenate companies and products with deep local connections that carry both the promise of the new and the satisfactions of the old. In the case of Well 80's Leopold's No. 1 Lager, there are worse ways to experience history than imbibing it. It could create a thirst for nostalgia in future generations.

Correction: An earlier version of this story stated that the Cosmic Crisp was receiving the country's largest ever produce product roll out. It is reportedly the largest apple variety roll out. The story has been corrected.