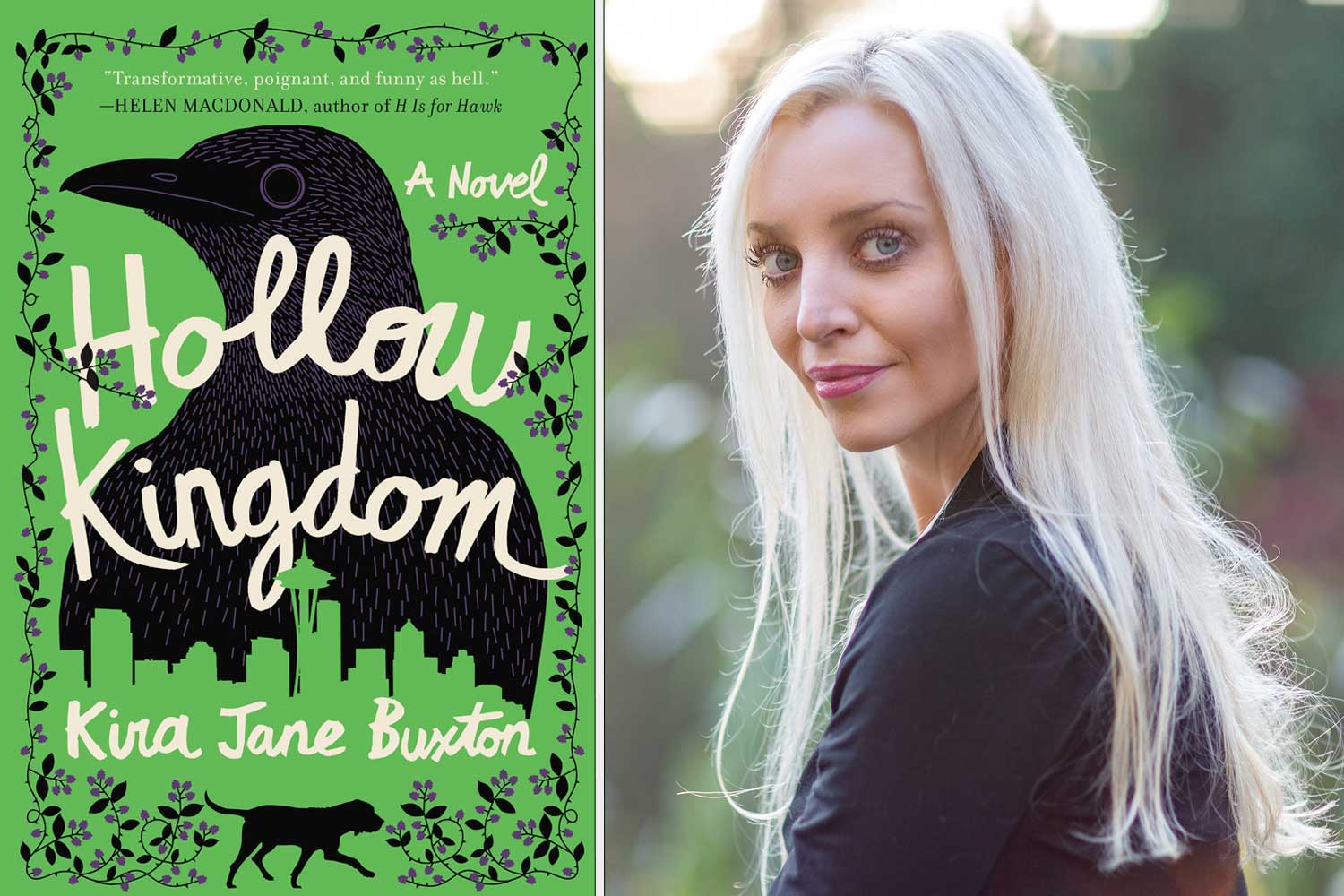 At this point in pop culture, we all know what zombies are like. They shamble, they bite, they lose body parts without blinking an eye (if they still have one). We have countless depictions of a zombie apocalypse, but so far they’ve been dominated by a human point of view. What about the pets whose owners suddenly seem less interested in feeding them than eating them? Might our domesticated friends be our salvation?

In her debut novel Hollow Kingdom, Lynnwood-based writer Kira Jane Buxton offers a clever new take on the zombie genre, as told by a foul-mouthed, domesticated crow named S.T. (short for Shit Turd). When the Cheetos-obsessed crow notices his human companion Big Jim has lost an eyeball and taken to shuffling around in the basement while drooling excessively, he realizes something has gone terribly awry.

The fast-talking feathered punster embarks on a quest — with his doddering bloodhound pal Dennis — through the swiftly crumbling streets of Ravenna, the Seattle Waterfront, Jose Rizal Park, Phinney Ridge and Lynnwood to try and gather forces with other “domestics” left behind, and go in search of an uninfected human who might bring hope for the future.

Along the way the beasts encounter many horsemen (and a gorilla, and a hippo) of the apocalypse, and discover that even as walking dead, humans are still obsessed with their cellphones. It’s a strange, funny, thoroughly original book that is also supergross (like all good zombie stories). But flying above all the gory details are tender insights about the human-animal connection.

The novel feels surprisingly fresh, if one can say that about a book full of rotting corpses. Buxton gets deep down in the guts, but she also floats compelling ideas about the animal world — such as the “Aura,” which S.T. the crow describes as an internet of birdsong, insect chirps and tree rustling that serves as a constant flow of information (and dating possibilities) if you tune in.

Because humans have lost touch with the world wide web of nature, most creatures in the animal kingdom refer to them as “hollows.” But S.T. believes human ingenuity is worth saving, not to mention their uncanny ability to open doors.

Buxton moved to the Seattle area with her husband in 2010, after driving through on a trip from Los Angeles to Vancouver, B.C., and falling in love with the trees. She’s an unabashed animal lover (check out her fauna-full Instagram), who says in her car she listens to only two things: Netflix comedy bits and a CD of crow language.

She’s written earnestly about her connection with hummingbirds, comically about camel beauty pageants, and satirically for McSweeney’s, in a piece called, “Do You Have a Child or Have You Just Been Followed Home by a Hyena?”

While she says she once doubted anyone would publish Hollow Kingdom, AMC has now optioned the television rights for an adult-oriented animated series based on the book. Currently touring bookstores for the novel’s release, Buxton is also at work on a secret new book project. In her spare time, she says, “I’m steadily trying to transform into a bird.”

Crosscut spoke with Buxton about using humor to face anxiety, the perils of animal narrators and her deep crow connection.

A crow narrating a zombie apocalypse amid environmental collapse — say what?

I get that question a lot. I think it means, “What’s wrong with your mind?” If four years ago you had told me I would be publishing a zombie book, I would have said, “Not a chance.” But there’s a long-standing cultural tradition of zombies standing in for our societal anxieties — whether issues of race, war or consumer culture. And I have been feeling really frustrated about the climate crisis. I also wanted to, in an allegorical way, show that while technology is a brilliant human invention, we’ve never been so simultaneously connected and disconnected. Then I thought, what if a crow is telling the story of humanity’s extinction?

It’s that last jump — to having a crow narrator — that seems a little unorthodox.

Well, I’ve been paying attention to crows for a while. At one point I was taking my dog for a walk and saw an injured crow. Other crows were screaming all around in the trees. I approached it, and thought this was going to be my Tippi Hedren moment, but the crows in the trees went silent. And this crow just seemed to understand I was trying to help. I raced it to PAWS, and while it didn’t survive, after that the crows started accompanying me on my walks.

And now you have crow pets?

They are wild crows — my crow buddies, a mated pair that visits me in my yard. I think it’s important to state: It’s illegal to own a crow, or any other migratory bird, according to the Migratory Bird Treaty Act of 1918. That was a [federal] law established during a time when feathers were getting really popular commercially. Technically, it’s even illegal to own a feather. But I wouldn’t recommend having a crow as a pet, anyway. They are so intelligent, and they make an incredible mess. The female crow, who I call T., is a goofball with a funny sense of humor. She hides and jumps out at me. She has one wonky wing. She’s clumsy and drools when she eats. In the book I used some of the crow behavior I’ve seen and studied.

How else did you study up on crows?

I read local writer Lyanda Haupt’s Crow Planet, and The Genius of Birds [by Jennifer Ackerman], Mind of the Raven [by Bernd Heinrich] and Gifts of the Crow by UW corvid expert John Marzluff. I also read all kinds of other nonfiction about animals, like The Soul of an Octopus [by Sy Montgomery]. Then I let all that simmer for a while.

When you started writing this debut novel, did it come to you all at once?

I had already written three other novels and a memoir, but they weren’t published. I’m happy I got to write those — and even to experience the heartbreak of not getting published. But I think I was writing with too many goals in my head. So this was after a bunch of rejections. My husband kept telling me, “You need to write about the crows.” We were having lunch in Bellevue and talking about writing, and as soon as I had the idea for the book, I raced home to write the first chapter as S.T. That pretty much stayed exactly as I wrote it. And it was the most joy I’ve ever experienced while writing.

Any fear of too much cuteness with an animal narrator?

I’ve heard people say, “I’m allergic to animal narrators,” and it’s a valid concern. But I grew up reading animal narrators like in Watership Down, and The Jungle Book cartoon was a favorite. So I wanted to get the crow voice right — or at least as articulately as I could as a bumbling human. My husband kept saying, “Just have fun with it.” And when I started writing as S.T. I couldn’t believe how rude this crow was.

You also include the voices of a few other animals, domesticated and wild.

Genghis Cat is modeled after my tabby. She’s a monster and I love her. Angus the Scottish Highland Cow actually came onto the page when I was trying to voice a hummingbird. The character that most intimidated me to write was the polar bear. I felt like it would be easy to come off as didactic or heavy-handed. But I decided it was more important to hear the voice of this animal than any embarrassment I might feel.

How do you capture the animal characteristics so vividly?

I’ve always loved animals. I went through a horse phase at 13 like a lot of girls, and right now I have three cats and a dog. My parents were big animal lovers — they instilled that in me, and also an awareness of the environment and a conservation ethic. My first job was at age 12, when I volunteered at a zoo in Indonesia, where we were living at the time. My job was to pluck out beetles from the mealworms that were used to feed some of the animals. By day two I was bored, so I went out to have animal encounters. I got to hand-feed a hippo, and a Sumatran rhino (which is very endangered), and it was really amazing. My whole life has been about being around animals.

Why Seattle as the setting for the apocalypse?

It has to do with falling in love with this place. I just felt so welcomed here — as someone who loves animals and who loves writing. The writing community is so strong here. In my previous time as an actress in L.A., I didn’t feel much camaraderie. So in many ways this is a love letter to Seattle. Even though I trash it horrendously!

There are some dark themes in the book — environmental collapse, animals dying, zombies doing gross zombie things — but you still infuse it with humor.
That’s how I’ve always coped with difficult situations. L.A. was really hard. So many strange things happened to me there. I’ve found humor can be so healing. And when it comes to climate crisis, people don’t want to talk about it. It’s very difficult to watch a video of a starving polar bear — it’s too overwhelming or it just feels too far removed to connect with. But I think we can have this conversation without shame and blame.

So what do you think — are we doomed?

I realized I’d have to research the end of humanity if I was going to write about it. And it was really fascinating — and humbling — to imagine what nature would do without us around. It allowed me to unhumanize my view, and see that we’re not sharing this space, we’re dominating it. I started thinking that the connections we already make with nature and animals could be extended wider. We’re already a part of nature — we’ve forgotten that. We consider it kind of a thing “out there.” But if we remember we’re part of nature, and we’re connected, that would be a step in the right direction of caring — so we don’t have an apocalypse.