First impressions are important to voters. Reporting on Lorena González's announcement could have painted a fuller picture of her qualifications. 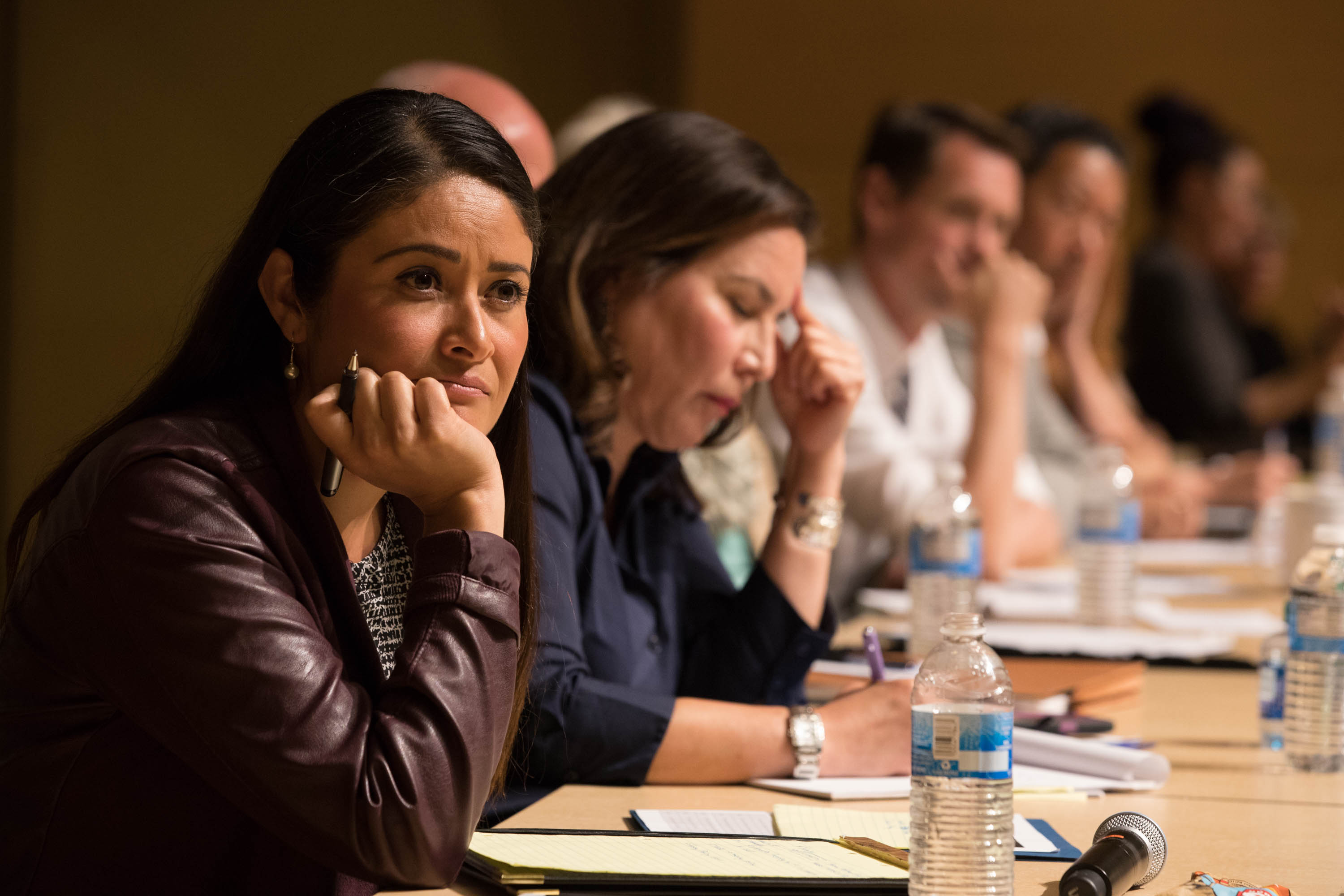 First impressions, however imprecise, have a funny way of sticking with us. When it comes to introducing a candidate for public office, how media choose to cover initial campaign announcements has a heavy hand in shaping public opinion.

While past coverage of a candidate’s actions in a different sector or smaller jurisdiction may exist, and future position statements or speeches may be covered throughout the election season, there’s only one opportunity to make a first impression.

This is the second column in an occasional series examining media coverage of Seattle-area elections. Read our introduction to the series to learn more about why we're doing this.

As scholar Erica Falk notes in her study of Hillary Clinton’s presidential announcement, “the way the media portray the candidates at the beginning of the campaign is particularly important to how the electorate form their first impressions.” The stakes are higher for coverage around announcements, and particularly high for women seeking public office, who face higher barriers to perceived viability.

Take, for example, the recent coverage of Seattle City Councilmember Lorena González’s announced run for attorney general. We compared two pieces, one by Melissa Santos of Crosscut and one by Jim Brunner of The Seattle Times. (González has since announced on Twitter that she will not pursue the position.)

We’ll note that any article or excerpt we feature is not an indictment or celebration of an entire journalist or publication’s body of work. Rather we have selected artifacts that reflect common habits in media more broadly, a common practice in academic analysis. As luck would have it, Crosscut provided our first example.

We looked at each piece through a reader’s lens and asked: what does this article tell us about each candidate?

For both Hansen and Purcell, the piece told us about their current positions, past experience, political party and specific policy proposals in fewer than 50 words each. In the 321 words dedicated to Fortunato, it told us the same, as well as four issue positions and three proposals.

But in the 251 words dedicated to González — ostensibly the primary focus of the article — almost all of them fixated on aspects of González’s announcement and rationale for running, rather than public service record and platform. You can see the difference in focus in excerpts from the article, color coded for which topics are being covered: experience, policy/issue position, identity or campaign announcement. 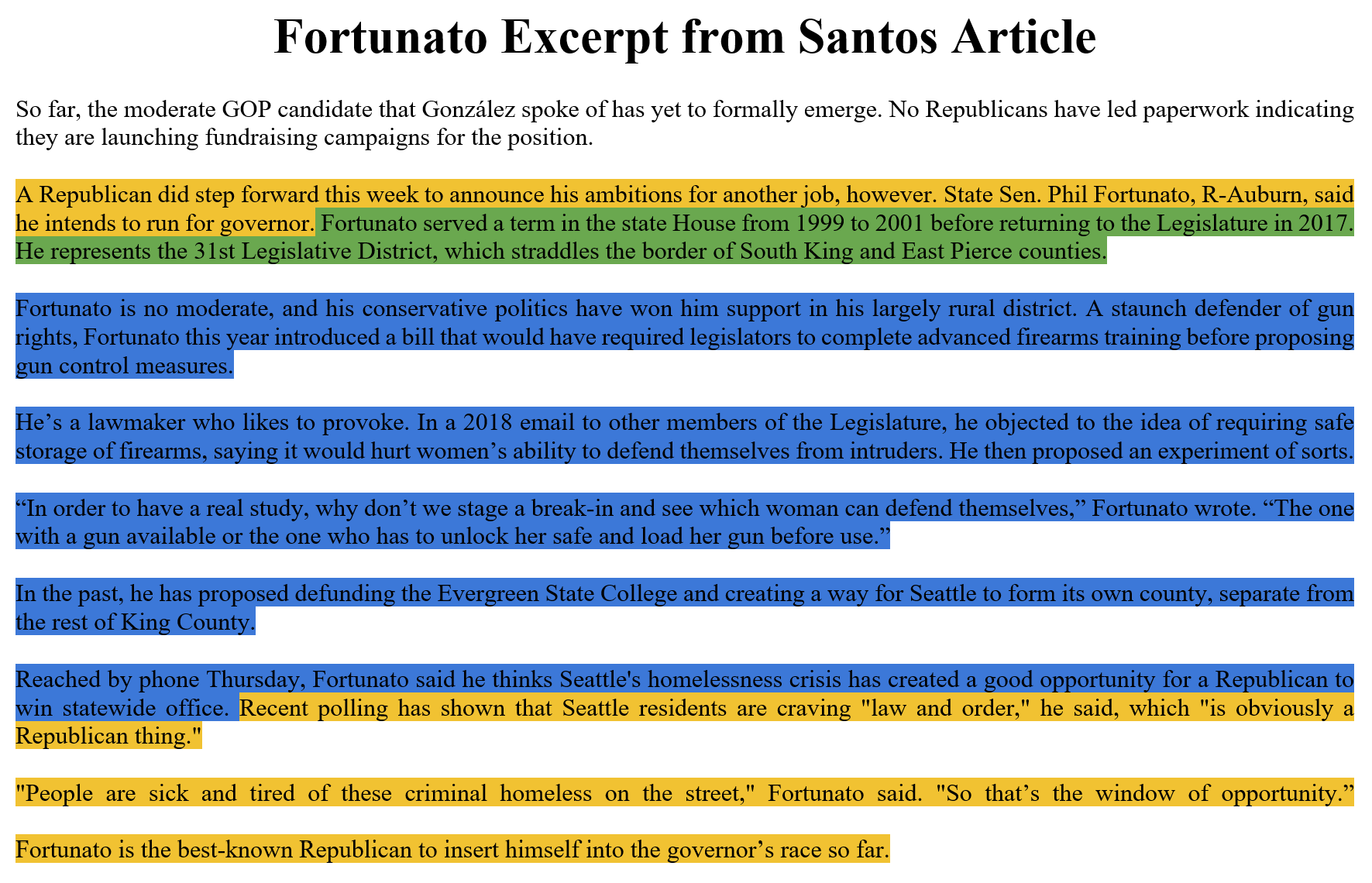 In direct contrast to the wealth of relevant information about Fortunato and the efficient but relevant information about both Purcell and Hansen, we came away from Crosscut’s article with no tangible examples of González’s past accomplishments or policy positions, both of which would provide voters critical insight into how she might perform as Washington state attorney general. Although the article noted that González had been a civil rights attorney previously, and that she “wants to stand up for people facing discrimination,” for a piece introducing her as a candidate, it lacked critical information about her candidacy.

We reached out to Santos to learn more about why Crosscut cast the piece the way it did. She explained it was part of her broader statewide political coverage: Pointing to her recent articles about who might be the next governor of Washington and the rise of “exploratory committees,” she said that Crosscut’s coverage had focused on the “musical chairs of people wanting to position themselves for potentially open statewide offices.”

As to why Fortunato received so much coverage of his experience and proposals when the article centered on position jockeying, Santos noted that Fortunato (as well as Purcell and Hansen) had received less previous coverage in Crosscut than González.

“Our core audience knows González well,” Santos wrote in an email, “and we took that into account when deciding how to present her to our readers.”

Crosscut’s core audience might be aware of González’s political aspirations to fight gun violence. They may know about her effort to make hate crimes a priority for local jurisdictions, or her public service record of bolstering civilian oversight of the Seattle Police Department’s internal disciplinary system. They may know about her private practice representation of workers in wage-theft and anti-discrimination cases, or the role she played in a federal lawsuit settlement against the Brewster School District’s treatment of Hispanic students (all examples taken from The Seattle Times article linked below), but our guess is that noncore readers may not come to, or away from, Santos’s article with a complete first impression of González as a candidate for statewide office.

Regardless of whether a reader is a Crosscut regular or a onetime drop-in, this article plays an important role in their first impression of González as a candidate for attorney general. Coverage should err on the side of providing a complete view for each candidate, particularly early in a campaign.

In contrast, Jim Brunner’s article for The Seattle Times — “Seattle City Councilmember M. Lorena Gonzalez eyes run for Washington state attorney general” — included details on the council member’s experience, accomplishments and proposals, and featured four quotes in addition to covering the details of her campaign announcement. Of the 644 words in the article, 418 were dedicated to González, with 20 words on Purcell and 18 on Hansen.

Below is an excerpt from Brunner’s article, also color coded for content topics. 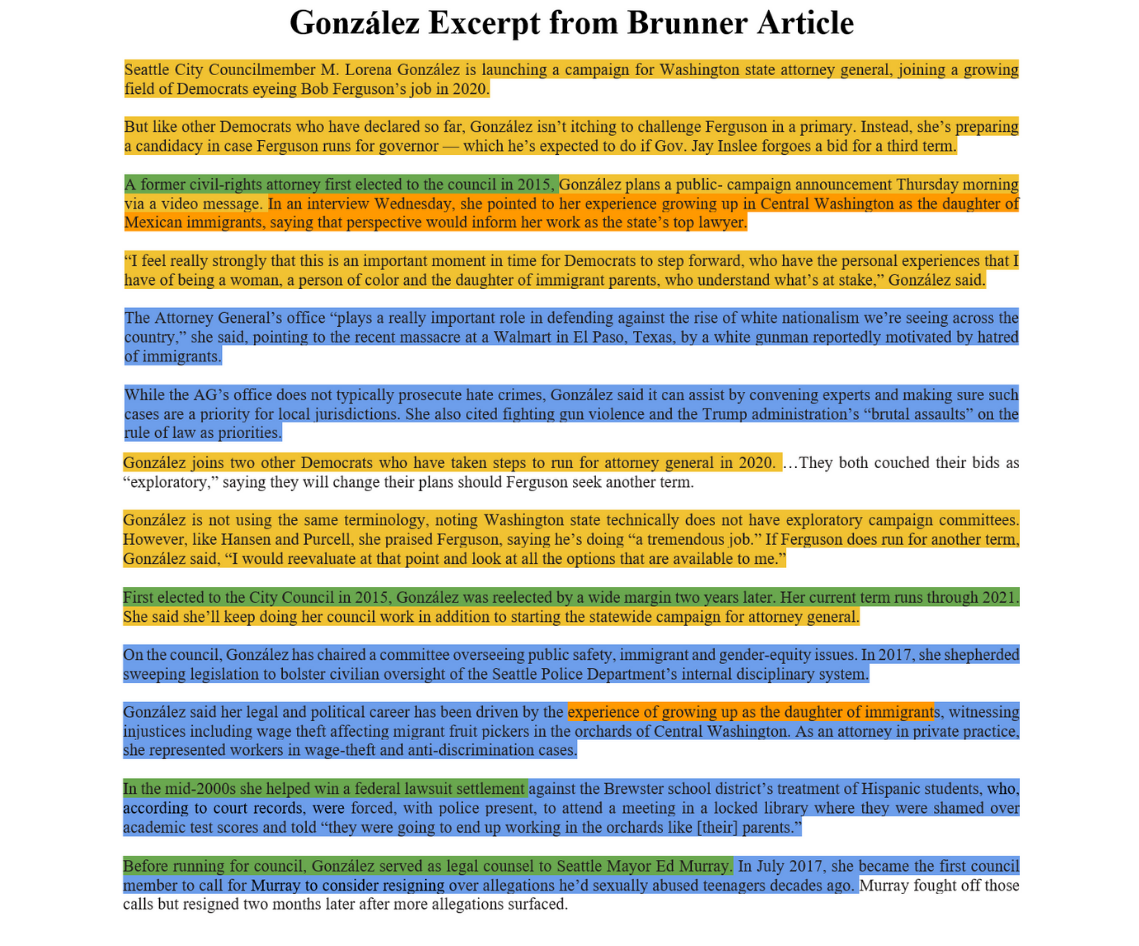 Like Santos, Brunner provided details about González’s campaign announcement and how it differed from the “exploratory” style approach of many other current candidates. However, Brunner goes further to provide the reader with context about González’s experience, accomplishments and key issue positions. It provides a much more complete view of González as a candidate.

As far as first impressions for prospective attorneys general go, these two articles offer very different pictures of the candidate. One provides context and insight on experience and public service record; the other skimps on that background. While the difference may be intentional, as Crosscut aims to provide a different form of analysis than is found in the city’s paper of record, it doesn’t change the fact that candidates have only one shot at a first impression, and that first impression matters.

Providing voters with more complete insight about women candidates doesn’t require journalists to have one gender identity versus another, nor does it require distinct news organizations to have the same editorial mission. It does, however, necessitate journalists — of any gender identity — and news outlets of all types, to select coverage topics with intention and actively oppose bias. Editors, even those in newsrooms that have gender parity, should establish clear standards and guidelines for candidate coverage.

In responding to our questions about the approach Santos took in her article, she mentioned that it gave her and her editor a chance to revisit the process Crosscut uses for deciding how to cover statewide races. “It’s been a productive conversation and will certainly help us moving forward into both the 2019 and 2020 election seasons,” she said.

We’ll be back with more examples from the coverage ahead, as the various dominoes of Washington state politics fall into place, and we’d appreciate you joining the team. If you see a piece of election coverage you think belongs in the series, send it our way. We’re on Twitter at #GenderEditor and @GenderEditor, or you can email us at gendereditor@gmail.com.


Update: We have updated this story to reflect that, as of Aug. 22, Lorena González is no longer pursuing the position of attorney general. 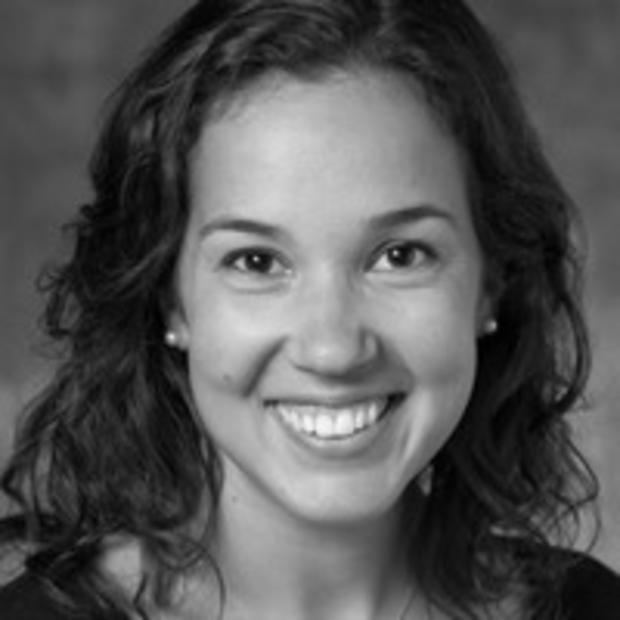 Dr. Kiana Scott is a political communication expert, focused on gender and campaigns in the United States.