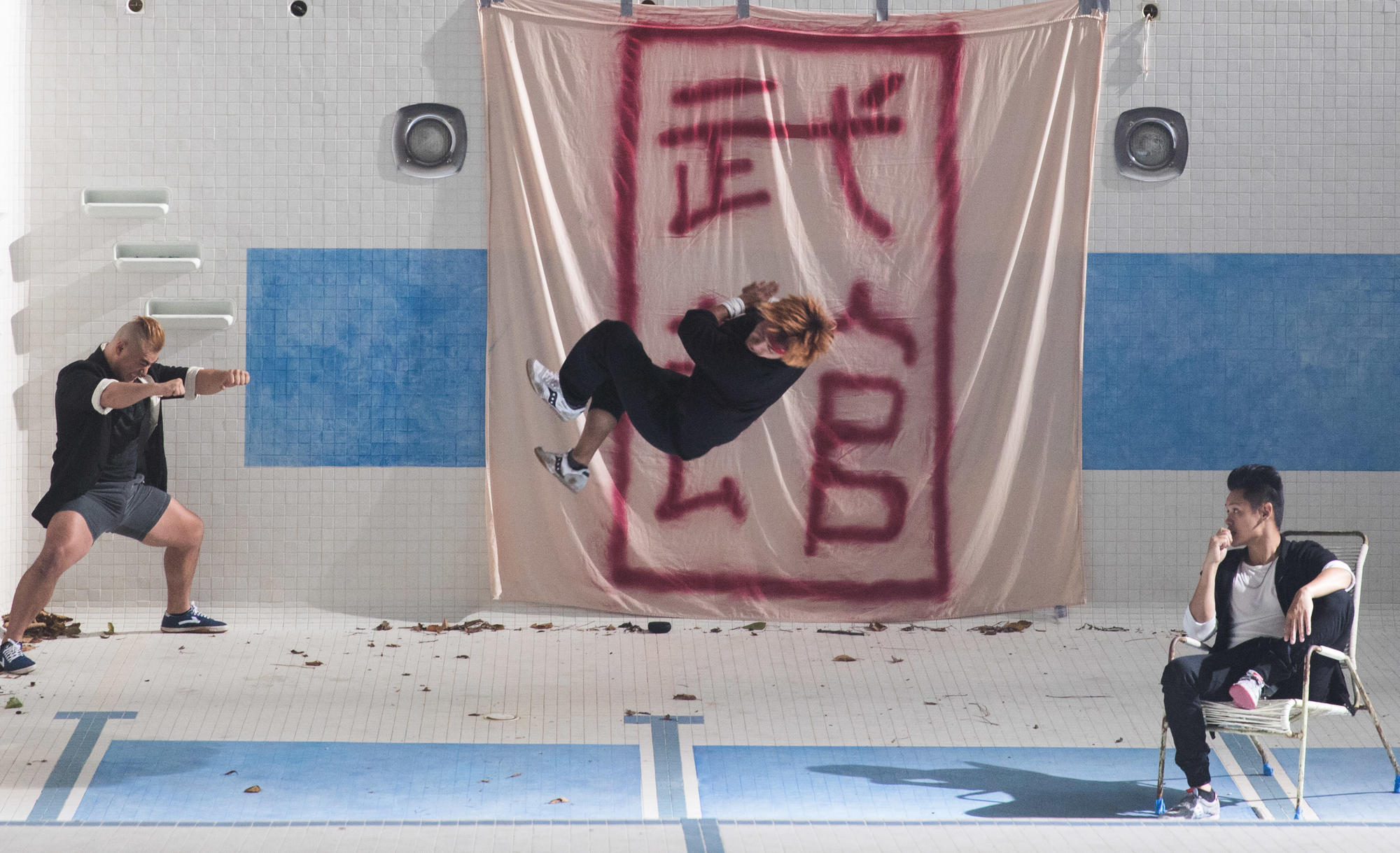 When the Seattle producers of The Paper Tigers started pitching their contemporary kung fu comedy, they received a lot of interest from Hollywood studios that wanted to green-light the script. One even offered $4 million, four times the projected budget.

There was just one caveat: fewer Asians.

“We got a lot of pushback about our all-minority leading cast,” says Al’n Duong, a 36-year-old father and filmmaker based in Kent, who is a producer on the film. The story surrounds three former martial arts prodigies (two Asian American, one African American). Now middle-aged, the estranged pals must upend their “civilian” lives to avenge their possibly murdered kung fu master. Duong recalls the standard studio reaction: “They’d say, ‘We love it. Maybe we could do it with just one Asian guy.’ ”

Update: Filmmakers released the first official trailer for The Paper Tigers on May 8, 2020. Take a look.

The Paper Tigers team was determined to make the film as originally envisioned. Long before the blockbuster success of Crazy Rich Asians (which grossed $238 million worldwide), they felt certain there was an audience for their kind of movie.

“We knew it was marketable, so we ran with it,” Duong says.

They took to Kickstarter and raised $124,000. That success, combined with a slick proof-of-concept trailer and a coveted slot at Cannes Film Festival’s networking program for movies in development, grabbed the attention of key investors. Thanks to several big donors (including a lifelong local who studied under Seattle transplant Bruce Lee), they were able to drum up the $1 million shooting budget — and have as many Asian characters as they pleased.

The driving goal has remained the same since the team first started developing The Paper Tigers eight years ago: Make an independent film that embraces the thrill and humor of martial arts movies, while offering a nuanced, realistic portrayal of Asian men.

The film is currently in post-production. But on a recent day in August, halfway through a tight 28-day shooting schedule, the cast and crew assembled at a Shoreline community center to film a pivotal fight scene at an empty indoor pool. By 10 a.m., fire trucks have already come and gone, responding to an alarm set off by a haze machine working vigorously to create a charged atmosphere in the institutional brick building.

The Paper Tigers writer and director Bao Tran isn’t thrown by the interruption. The focused 39-year-old filmmaker has an endearing goofball streak (as seen in his pitch video). Asked how things are going, he says, “It’s all been very pleasant.” He notes how much Seattle’s Asian business community has pitched in to ensure the filming goes smoothly. “Chinatown-ID [International District] has been so supportive,” he says. “Jade Garden provided the crew with food. The Dynasty Room let us shoot there, and the Nisei Vets Hall let us use their space.” He also filmed a big dinner scene at China Harbor.

Right now Tran is standing at the edge of the drained pool, watching the band of “young punks” — who may or may not be connected to the kung fu master’s death — practice their moves in the deep end. 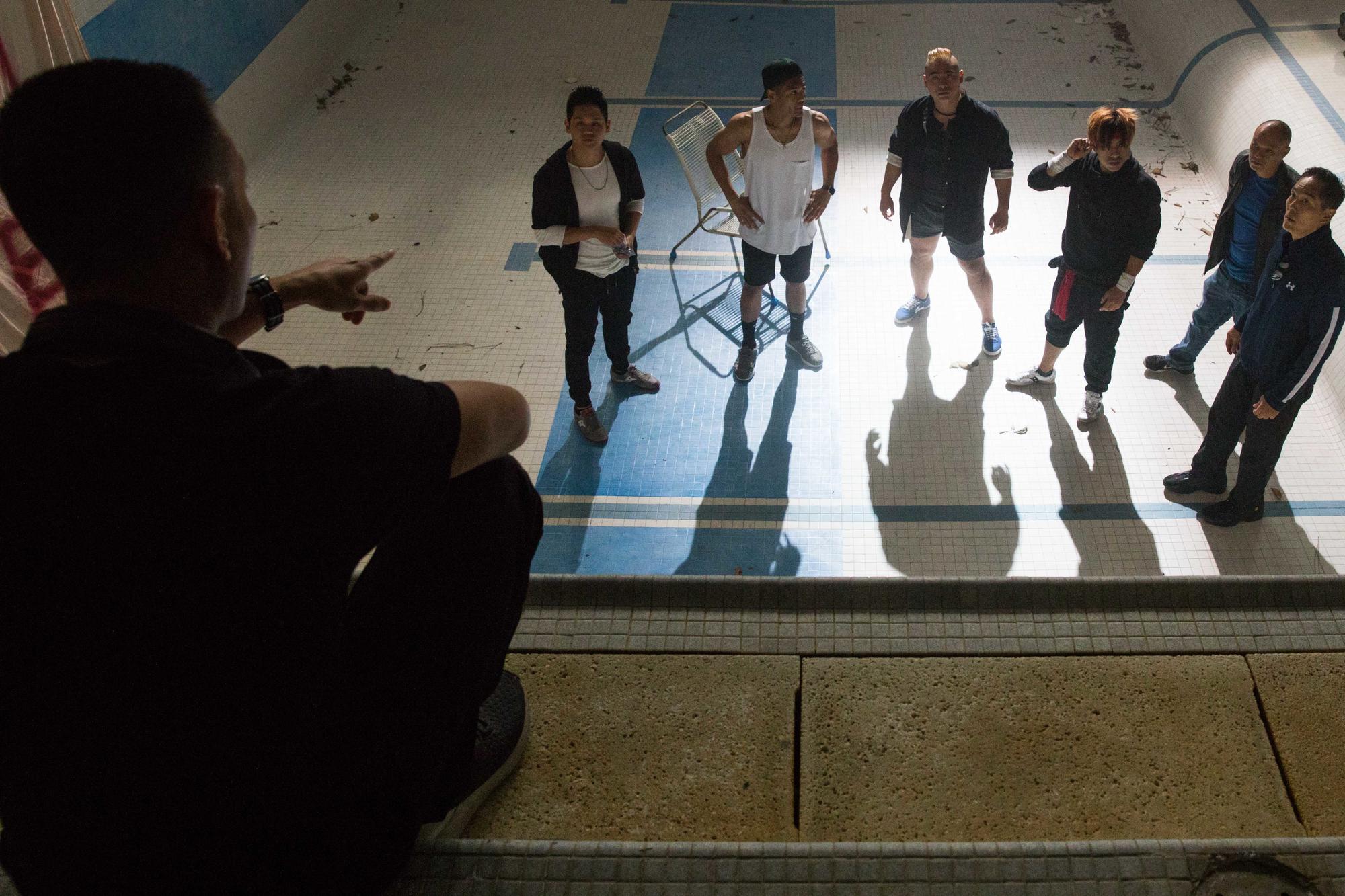 Tran explains that this scene is crucial, because it represents the clash of generations. The three older men (actors Ron Yuan, Alain Uy and Mykel Shannon Jenkins) confront a trio of young toughs, who remind them of their younger selves and highlight some fundamental differences.

“When martial artists don’t have a master, they can teach themselves through YouTube,” Tran says, explaining the backstory. “But there are no roots, no lineage.”

When the scene rolls, one of the older characters at the pool’s edge admonishes the youths: “The master always said, ‘Kung fu without honor is just fighting.’ ” It rings like a line from a classic martial arts movie.

Tran says The Paper Tigers’ nod to genre tropes is the reason some Asian film producers expressed doubts about making the movie. He says they were worried about stereotypes, asking, “Why do you want to make a martial arts movie? It only sets us back!” While acknowledging this as a valid concern, Tran protests, “But I love martial arts movies.”

Duong recognizes the hesitance. “I understand the pushback — kung fu movies are a sensitive topic. But for us, growing up, it was just what you did after school,” he says. “It’s very much a part of our history. We can’t just ignore it. We’re telling our story.”

Tran and Duong were raised in very similar circumstances. Both are children of Vietnamese refugees who fled to the United States in the 1970s. Their parents landed in Olympia, where both men were born, and as boys drank in Bruce Lee and other Hong Kong fight movies. They emulated the martial artists’ precise, powerful moves, and recorded scenes on low-fi video.

“Bao and I grew up in the same way,” Duong says, “making kung fu movies in the backyard.”

But the two didn’t cross paths until both had moved to Seattle (Tran went to Seattle University, Duong to University of Washington). They met on the set of Bookie, a short film that Tran wrote, directed and edited, on which Duong served as grip. A tense film-noir affair that takes place in a 1960s Seattle R&B club, the short gained acclaim at a variety of independent film festivals in 2008. More importantly, it established a bond among the largely nonwhite cast and crew, and set an ambitious precedent.

“That was a majority minority crew,” Duong says. “It felt so much like home. We all promised to make a feature film together some day.” He gestures at the cast and crew buzzing around the pool. “Ten years later, there are a lot of people here from Bookie.”

The Paper Tigers production team also insisted on bringing young people of color onto the set as interns.

“A lot of minorities don’t get reinforcement from their families to be an artist,” Duong says. “For Asian Americans, the acceptable jobs are lawyer, doctor, pharmacist. We have to fight through that to become artists.” His hope is that those who learn skills from working on this film will feel supported, and in turn support other minority filmmakers, so the community grows.

Behind the Scenes with Bao Tran

As part of Northwest Film Forum’s Local Sightings film festival, The Paper Tigers writer/director Bao Tran will give a talk about his experience making a kung fu movie all over Seattle. Sept. 22 at 7 p.m. ($5-$15)

Beyond fighting ingrained stereotypes, the filmmakers are trying to present Asian American men as textured characters with positive and negative qualities, just like any human.

“In American movies, Asian American men are either action figures or emasculated,” Duong says. Or both at once. In Quentin Tarantino’s new movie Once Upon a Time in America, Brad Pitt’s stuntman character beats up Bruce Lee during a break on a movie set. While Duong believes a new wave of movies (including Crazy Rich Asians and this year’s The Farewell) is working to add more depth to Asian roles, he says, “This is still an issue.”

He and Tran both emphasize that the men in The Paper Tigers are characters with complexity — they are dealing with day-to-day kid logistics, going through divorce, facing middle-aged fears and filled with nostalgia for a faded youth. “We’re capturing how fragile masculinity can be,” Duong says. “We’re poking fun at it, too — with the young guys and the older ones. We’re trying to capture what it’s really like to be an Asian American man.”

At the lip of the pool, the older characters trash-talk the younger set below, building up to a fight. But when the moment for action arrives, they are wary of climbing down the long ladder into the deep end. They walk to the shallow end instead, the boom mic following them like a fishing rod.

“The humor is grounded in the realities of their age,” Tran says. “You have to pick your kid up from soccer, then go fight in a death match.”

Tran stresses that his goal isn’t to “represent” all people of East Asian descent. “That’s such a loaded term,” he says. “We’re not trying to push a cause. We’re just coming from a perspective that’s genuine and honest, with nostalgia but without homogenizing.

Members of the GOP at every level, including in Washington state, are responsible for the mob that stormed the U.S. Capitol.