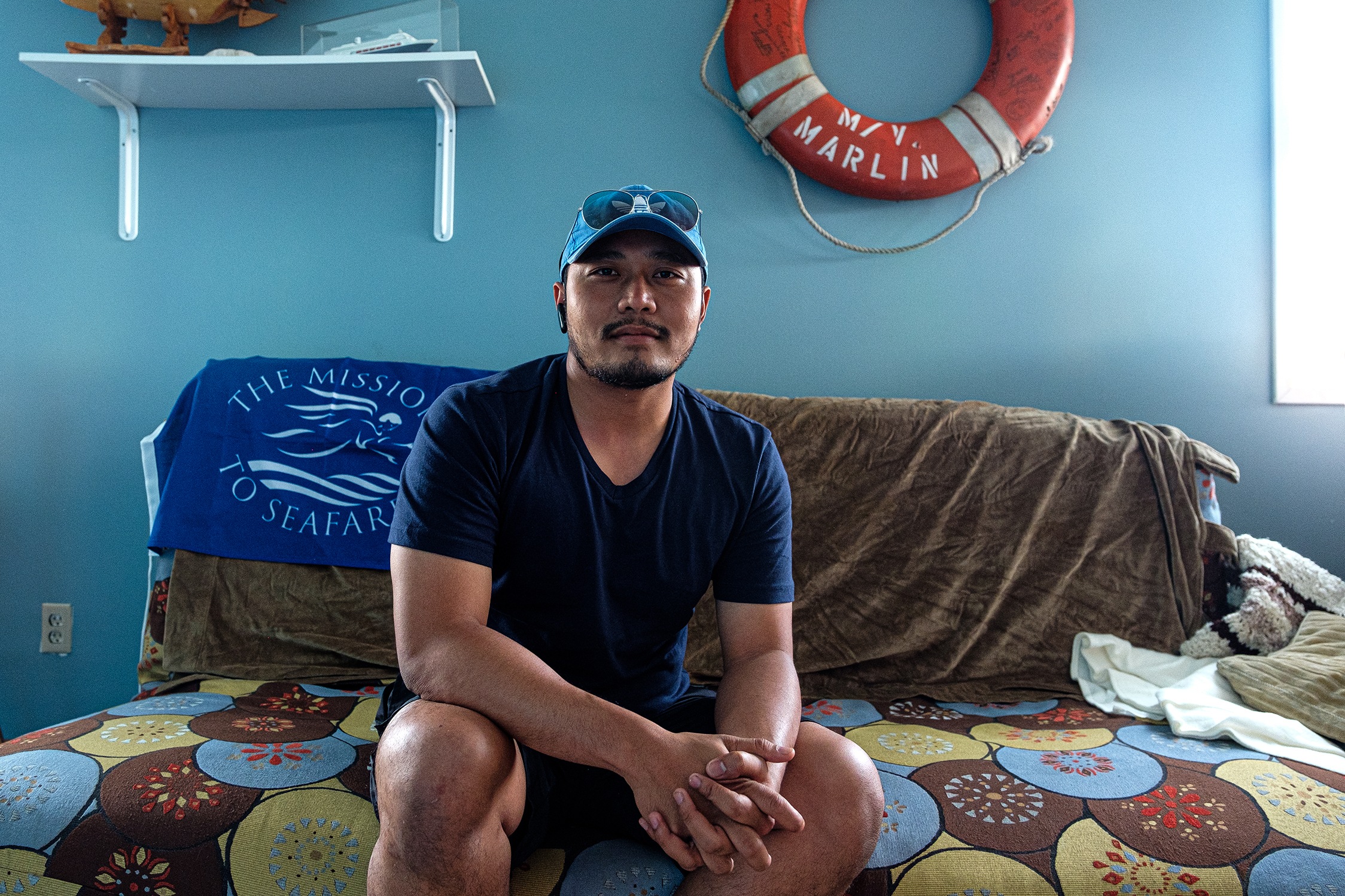 Rio Harto, an Indonesian seafarer who works as a safety officer aboard a cargo vessel, stops by the Seattle Seafarers' Center on Sept. 11, 2019. (Photo by Caean Couto for Crosscut)

Rio Harto is a seafarer traveling the world for months at a time. It's lonely work.

“Sometimes we feel we don’t have a family at all,” Harto said one recent afternoon as he sat at the Seafarers' Center, located just underneath the Spokane Street Bridge, along Seattle’s Duwamish Waterway.

A sign reveals the center’s purpose: "caring for seafarers around the world," an image of a flying angel featured just above the words.

Inside, there’s a piano and a pool table with a large map of the world on the wall. Seafarers place red pins on their home country. In the adjoining chapel, a painting depicts Jesus helping helm a ship. Prayer mats are on hand for Muslim seamen, as are holy texts for Hindus.

This is Seattle’s Mission to Seafarers, an ecumenical effort serving the thousands of sailors, as well as staff on cruise ships, who pass through the Pacific Northwest every year. Many are on cargo ship crews that bring goods that Americans buy every day: electronics, cars and other items.

“Most of the stuff that we’re buying, these folks have had a hand in bringing to our homes,” said Joe Cotton, director of pastoral care at the Catholic Archdiocese of Seattle.

Mission to Seafarers, serving more than 200 ports around the world, is an attempt to make sea life a little more comfortable. The operation in Seattle is uniquely ecumenical,  a cooperative effort among Catholics, Episcopalians and Evangelical Lutherans. Mission to Seafarers’ volunteers visit ships, bringing laptops with them for seamen to use. They also bring cellphones and low-cost phone cards so that the workers can call home while in port. Volunteers also sometimes run errands for the workers.

Seafarers need the spiritual support. Fires, pirates and other hazards make working at sea the third most hazardous occupation, according to the Mission to Seafarers website. In addition, working on ships can be isolating, leaving seafarers at higher risk for depression, divorce and suicide.

The purpose of the seafarer ministry is to “elevate the dignity of every person working in this industry,” Cotton said.

“It’s serving a population that would otherwise be rather invisible,” he said. “Most of our community has no idea that they are here."

The seafarer building has a computer center allowing sailors to connect with distant family, sometimes witnessing events as big as the birth of a daughter or a child’s first day at school. The computer center has proven more popular than the chapel.

Many seamen make ships and oceans their homes for nine months at a time, leaving loved ones behind. Most are male — approximately 2 percent are female — and from the Philippines, but seamen come from all over the world, creating cultural and linguistic barriers among the 20 to 25 workers who make up an average crew. Some don’t have the proper documentation to disembark from the ship when they arrive at shore. 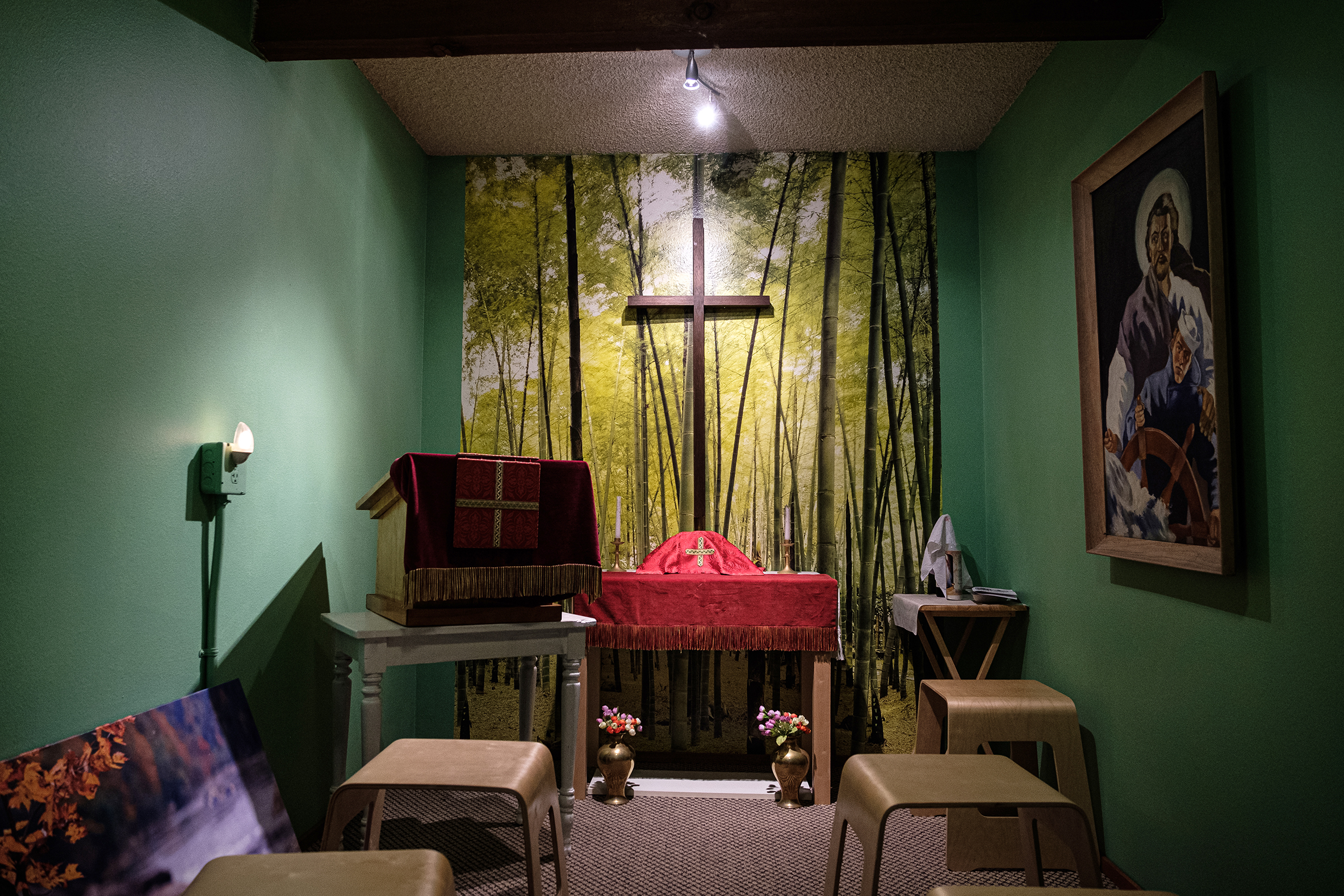 A small but intimate chapel within the Seattle Seafarers' Center on Sept. 11, 2019. A majority of workers served by the mission are Christian, but the center welcomes people of all faiths. (Photo by Caean Couto for Crosscut)

A small but intimate chapel within the Seattle Seafarers' Center on Sept. 11, 2019. A majority of workers served by the mission are Christian, but the center welcomes people of all faiths. (Photo by Caean Couto for Crosscut)

Those who are allowed to disembark jump in vans for shopping in the city. Target, Ross and Victoria's Secret — gifts for the girlfriends and wives — are some of their favorite spots.

Those who choose to spend a few hours at the center might run into Jack Ipsen, a 21-year-old junior at the University of Washington who has been volunteering with the mission for several years. Ipsen helps track mail for seafarers who have it delivered to the center.

Board games, copies of The Seattle Times and National Geographic magazine, as well as religious paraphernalia — Bibles, rosaries and other items — are all part of the supplies provided for the men and women of the sea.

On a recent afternoon, Harto sat in the center’s lounge, a Bluetooth earpiece in one ear. He has a baseball cap and sunglasses stacked on his head. He’s a safety officer with a six-month contract that requires him to travel from Seattle to Panama to Europe in a loop, over and over. It pays approximately $3,000 a month, he says, which is three times more than he could ever hope to earn at home.

“Everything is about the money,” he said, while noting he can support his parents back home in Indonesia on his salary.

Harto said that, at 28, he’s been to almost every country in the world except Australia. Cape Town, South Africa, has been his favorite destination.

Asked whether he sees himself continuing in this work, Harto smiled and said, “I love this career.” 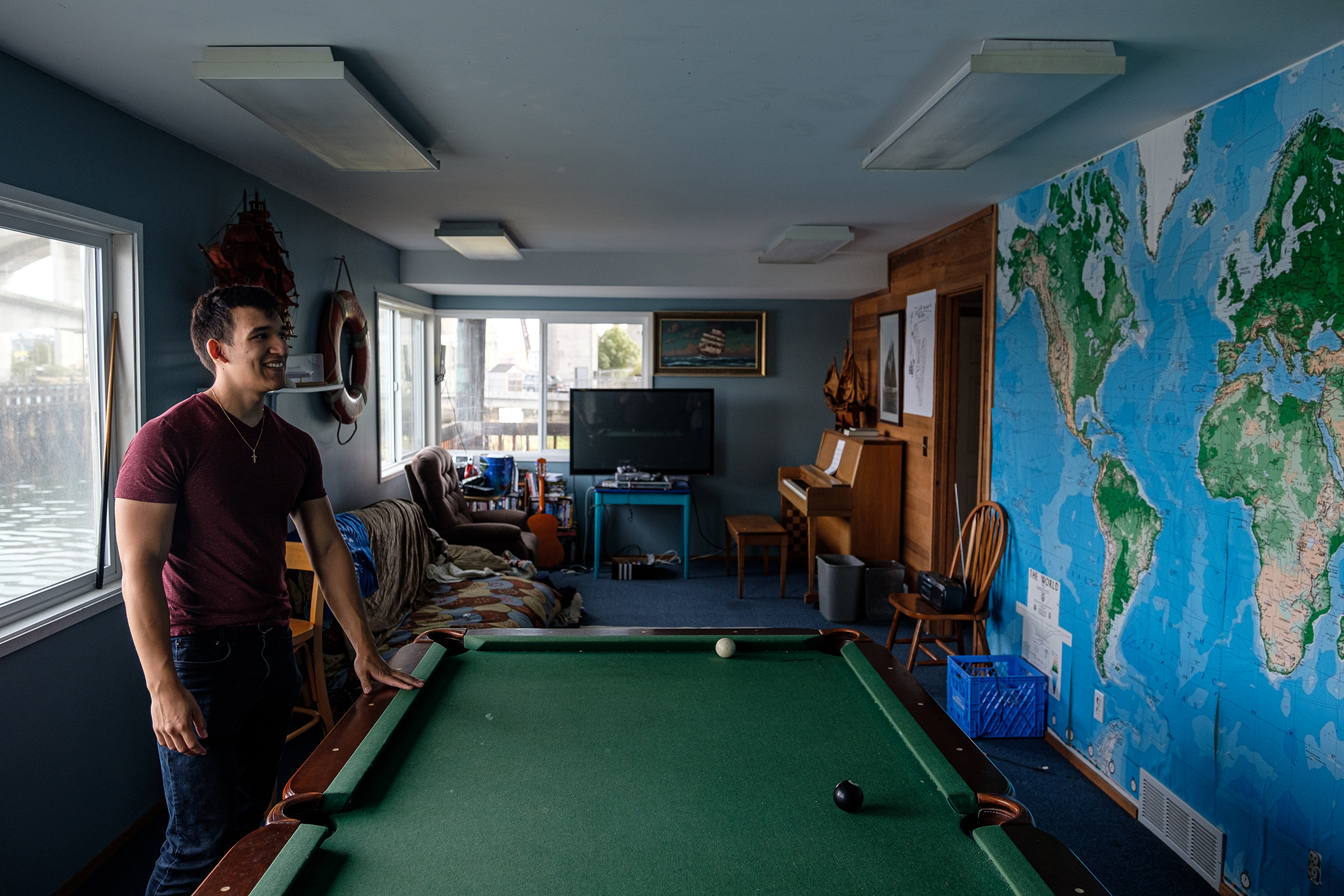 Mission to Seafarers intern Jack Ipsen looks towards the world map in the Seattle Seafarers' Center on September 11, 2019. (Photo by Caean Couto for Crosscut)

Mission to Seafarers intern Jack Ipsen looks towards the world map in the Seattle Seafarers' Center on September 11, 2019. (Photo by Caean Couto for Crosscut)