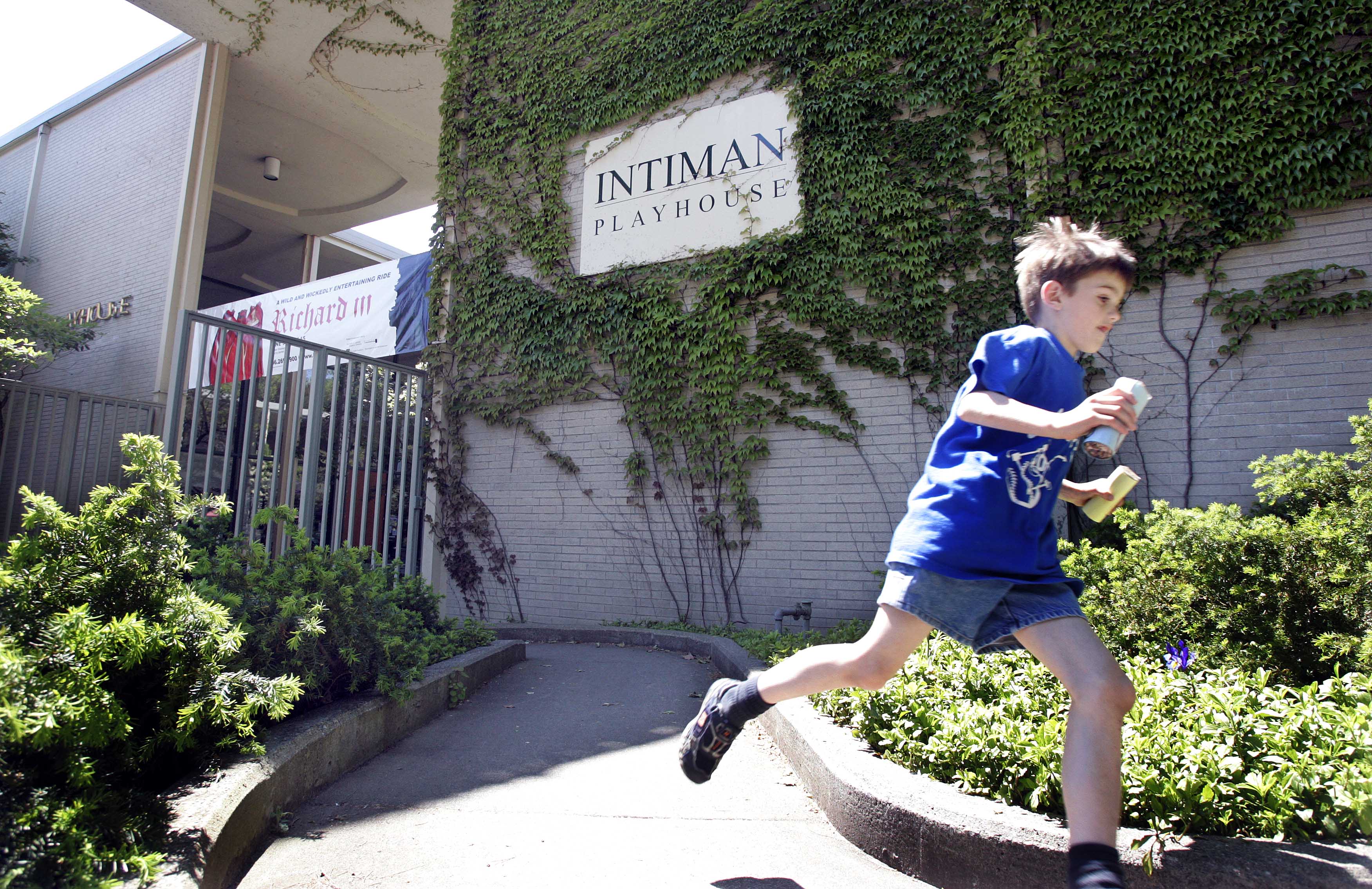 Arthur Wesley, 7, races past the Seattle Center building that once housed the Intiman Theatre in 2006, the year the theater won a Tony. The theater has since lost its home and is now facing extinction. (Elaine Thompson/AP Photo)

Update: Oct. 3 — Intiman Theatre will continue. The theater board and staff have come to an agreement precluding threatened layoffs, according to an announcement Thursday. An arts consulting firm, Scandiuzzi Krebs, will provide interim management of the theater, which saw its executive director resign. Intiman’s Wesley Frugé said the theater is "focusing on replenishing reserves and cash flow issues."

“What day is it?” Intiman Theatre Executive Director Phillip Chavira asked no one in particular last week. “Wednesday? So I am the executive director for three more days.”

It was hardly a surprise to the two dozen people gathered in the fluorescent-lit meeting room of the Seattle Center Armory. Most were former board members, employees and supporters of Intiman, a 47-year-old power player in the Seattle theater world that has been in poor financial health for years. They knew Chavira had resigned, that the theater was in trouble. That’s why the theater’s board called Wednesday night’s emergency meeting, and why the crowd was there.

Dark clouds had surrounded Intiman since deep debt problems emerged in 2011 and when it lost its 480-seat Playhouse Theatre space at Seattle Center in 2014. Celebration in January this year, when the theater announced it was finally free of a $2.7 million debt, proved premature. Still hounded by cash flow problems, the Intiman may go under.

The board painted a dire picture at the Wednesday meeting: Intiman would run out of cash on Monday. Layoffs were likely. The debt would total just over $7,000 but, more worryingly, board members said, its reserves were nearly gone. The board had already voted to scale back operations, to close down and find a new model rather than to crash and burn. Staff and supporters contend the board sees a crisis where there isn’t one.

Since opening in 1972, Intiman has carved a prestigious niche by bringing reinvented classics to the city and, more recently, contemporary, social justice-focused plays. The theater trains artists and youth from communities underrepresented in the arts.

“Intiman made it their mission to wrestle with American inequities,” said Dominica Myers, associate director of administration at Seattle Opera and longtime arts nonprofit professional. “To my knowledge, nobody else is really embracing that mission so fully and with such depth and passion.”

Intiman, though it has dialed up its social justice and equity focus in recent years, was set on that path in the early ’90s. Intiman became the first regional theater to produce Angels in America, Tony Kushner’s epic Broadway play about the AIDS epidemic. For years, it staged the hugely popular Black Nativity, Harlem Renaissance poet Langston Hughes' gospel music-styled spin on the Christmas story.

In the early 2000s, under Artistic Director Bartlett Sher, Intiman mounted an ambitious five-part series asking attendees to question what it means to be an American, and it became the first arts organization to be named the Civic Organization of the Year by the Municipal League of King County. In 2006, it won the Oscars of the regional theater world: a regional theater Tony Award. Season ticket sales soared. Just this month, the theater received a Mayor’s Arts Award.

Financial woes and debt have followed Intiman since its early days. Roughly a decade after its beginnings in a tiny Kirkland venue, founder Margaret Booker, who had bootstrapped the company as a place for intimate, international plays, left after tiring of the financial troubles.

As Intiman collected laurels, it finished in the red for years. By 2011, it had accrued that $2.7 million debt. Staff was laid off, shows were canceled and it lost its theater. A smaller Intiman reopened in 2012, operating under austerity while paying off its debt and without a home theater since 2014.

For years, the theater’s focus on retiring its debt consumed the board’s attention as its emergency fund dwindled. When the theater announced to much fanfare earlier this year that it would give away free tickets to all its shows, the move was hailed as an act of radical hospitality.

Laura Penn, Intiman’s former managing director, said she started receiving emails in January asking her to help with what she saw as “emergency” fundraising. She said she then realized the free tickets were “less of a visionary strategy and more of a tactic” to fill seats and raise funds.

Wesley Frugé was brought on in April as a consultant on the free-ticket program and has been serving as Intiman’s full-time communications and development director since August. He said the program was intended to deal with a not-enough-butts-in-seats issue, “which it successfully did,” he said, adding that it had raised $140,000.

“We’re not in this situation because we gave away free tickets,” Frugé said. The costs of the program was negligible, and ticket sales are not a significant portion of the overall revenue, Frugé said.

But attendance numbers, Frugé said, are still important. “If the community is not there to see it, it’s an issue,” he said.

Getting people through the door, Frugé said, also matters because those people could become future season ticket holders, donors or even board members.

Attendance has dropped in regional theaters across the country, and struggling theaters and arts nonprofits are more the rule than the exception. Like Intiman, Seattle-based A Contemporary Theatre, better known as ACT, announced that it had emerged from debt just this year.

“The theater field is undercapitalized,” said Teresa Eyring, executive director of Theatre Communications Group, a national organization representing nonprofit theaters. “Available cash across the field is lower than it should be.”

Eyring’s organization publishes a yearly report on fiscal and attendance issues for theater nonprofits. Its research shows ticket sales fell by 2% during the past decade.

Myriad issues are to blame. Donors' funding priorities have changed, and corporations are donating less to nonprofit theaters, making the fight for funding more competitive. High-quality entertainment can be accessed on-demand at low cost. Arts journalism has become more sparse, and the public, concerned about an economic slowdown, might be less inclined to show up.

Those are general trends, though, and Eyring said she couldn’t speak to Intiman’s situation specifically. But she said Intiman “has certainly been a really important part of our national ecosystem of theater,” both in its artistic choices and in the way it reinvented itself in the face of financial challenges.

Executive Director Chavira’s arrival in 2017, as the company’s first leader of color, signaled Intiman’s most recent reinvention into a boundary-pushing theater with an activist bent. The promotion of Jennifer Zeyl, who had started at the company as a set painter, to artistic director locked in that social justice-focused direction.

“I think it’s never been about the productions,” Chavira told Crosscut. One problem, he said, is how fundraisers of color “are folded into the mix” to raise money from a predominantly white donor pool.

And so, Intiman’s mission — to grapple with social and racial injustice — played out backstage, too.

Those issues are, of course, bigger than Intiman. Seattle Opera's Myers said closure could set a bad precedent.

“It's a signal to every other company that if they decide to go that direction, that it will be a failure,” Myers said. “There are plenty of people who think that there's no return on investment in examining racial equity and social justice.”

Zeyl, seated near Myers during Wednesday’s meeting, had sprinkled the tables with stapled paper packets containing statements of support by local author Lindy West, as well as actors, designers and producers. Zeyl adamantly opposed board plans to lay off all Intiman staff except her, keeping her on to lead a new effort in the new year.

Wednesday’s meeting was Zeyl’s chance to convince the board, seated at the opposite side of the circle of tables, that people were willing to revive Intiman — that there was support for her plan, which did not include layoffs.

The picture Intiman staff painted wasn’t sunny. Intiman needs to raise at least $54,000 to get through 2019, and ideally an additional $150,000 to start refilling the savings. The plan proposes to slash the operating budget in half, and to scale back to two shows, both co-produced with other local companies, while Intiman figures out a way forward.

“What we’re looking at is kind of a blank slate,” Frugé said, referencing Intiman’s debt-free status.

Frugé and Zeyl have been working behind the scenes for weeks to rally support for Intiman. There was already “blood in the water” back in August, Zeyl told Crosscut. As the staff hammered out a plan for this fall and next year, Zeyl said, the board voted unanimously to either shift Intiman to another organization or close it.

“We're not on the same page,” Zeyl said. “The board has been resistant to hearing, acknowledging, discussing [or] questioning ways forward.”

“The board was ready to close the theater without speaking to anybody in the community,” Zeyl continued. “I think it is unconscionable.”

During the meeting, board members listened as longtime arts leaders, donors and nonprofit professionals offered optimism. This, they argued, was just a rough patch.

“Intiman is not in a crisis, for heaven’s sake,” Judy Pigott, who attended Wednesday’s meeting, told Crosscut in a recent phone call. “They’ve got money for the next month, they’ve got donors waiting in the wings for the board to tell us to go forward for 2020.”

Pigott, a longtime arts philanthropist, has been a regular at the theater since 2004 and says she’s ready to support the theater financially.

“I believe that art has the power to change hearts and minds,” Pigott said. “The power that is particularly Intiman’s at the moment has to do with equity in all aspects, their productions, their choice of professionals to have on stage, their staffing and their audience, and I believe this is incredibly important for our world today that seems to be dividing rather than uniting.”

Speaking Thursday, board member Barbara Lewis said the board did not know what would happen in the next few days or when a final decision about Intiman’s future would be made.

In any case, action came too late for Chavira. He’s leaving to be with family in California.

“I wish that we had this open forum maybe even a year ago,” Chavira said after the meeting. “I think we would be in a different scenario.”

Zeyl, walking the low-lit paths of Seattle Center back to the theater offices, said Intiman’s social justice-oriented approach is unique in Seattle. As long as there is support, Zeyl said, she will keep going.

“This is Seattle's theater. And if Seattle says keep going, that's our job.”