‘You Failed Us’: Teen author asks 40 students of color to share their experiences at Seattle schools 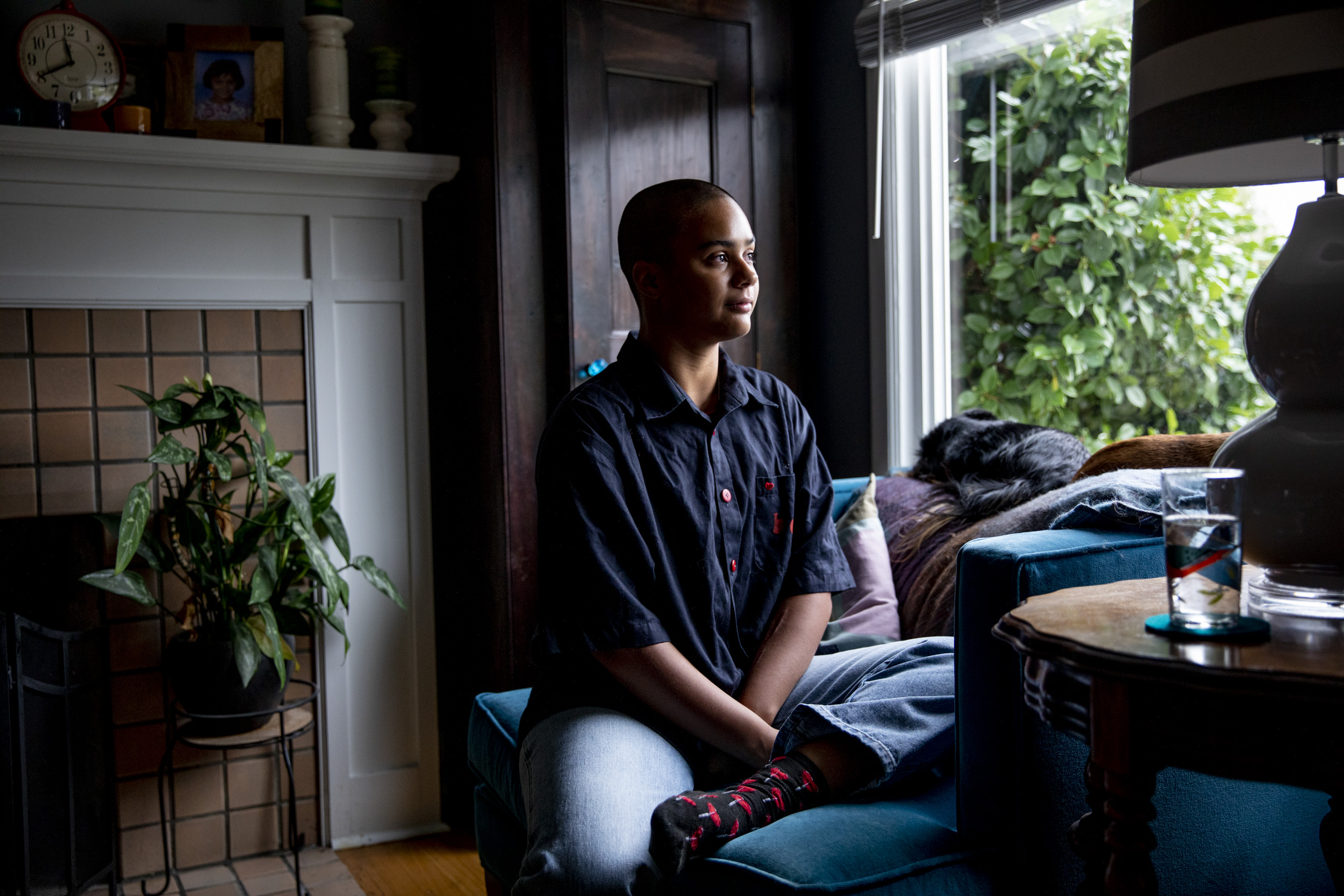 It was two years ago that Azure Savage began writing their first book, the origins of which can be traced back to their kindergarten year at Seattle’s Thurgood Marshall Elementary. It was there, they said, that they first noticed inequities in how different students are treated.

“There was like a policy with my kindergarten teacher to use labels for kids … either good kids or bad kids,” the 17-year-old, who uses they/them pronouns, recently told Crosscut. “At least that’s how I processed it in my kindergarten mind. And I mean I was 5 – I wasn’t thinking about it racially. But the people who I remember to be bad kids were all Black and brown students.”

In August of this year, Savage published You Failed Us: Students of Color Talk Seattle Schools. Part memoir and part collected oral history, You Failed Us interlaces Savage’s personal journey with the experiences of approximately 40 other school-aged youth in the Seattle area.

Ann Owens, Savage’s mother, affirmed that her child’s awareness of race began at an early age. Owens recounted how Savage, who was previously part of Seattle Public Schools' highly capable cohort of students identified as high-aptitude learners, objected to their photo being on display in their mostly white elementary school classes. 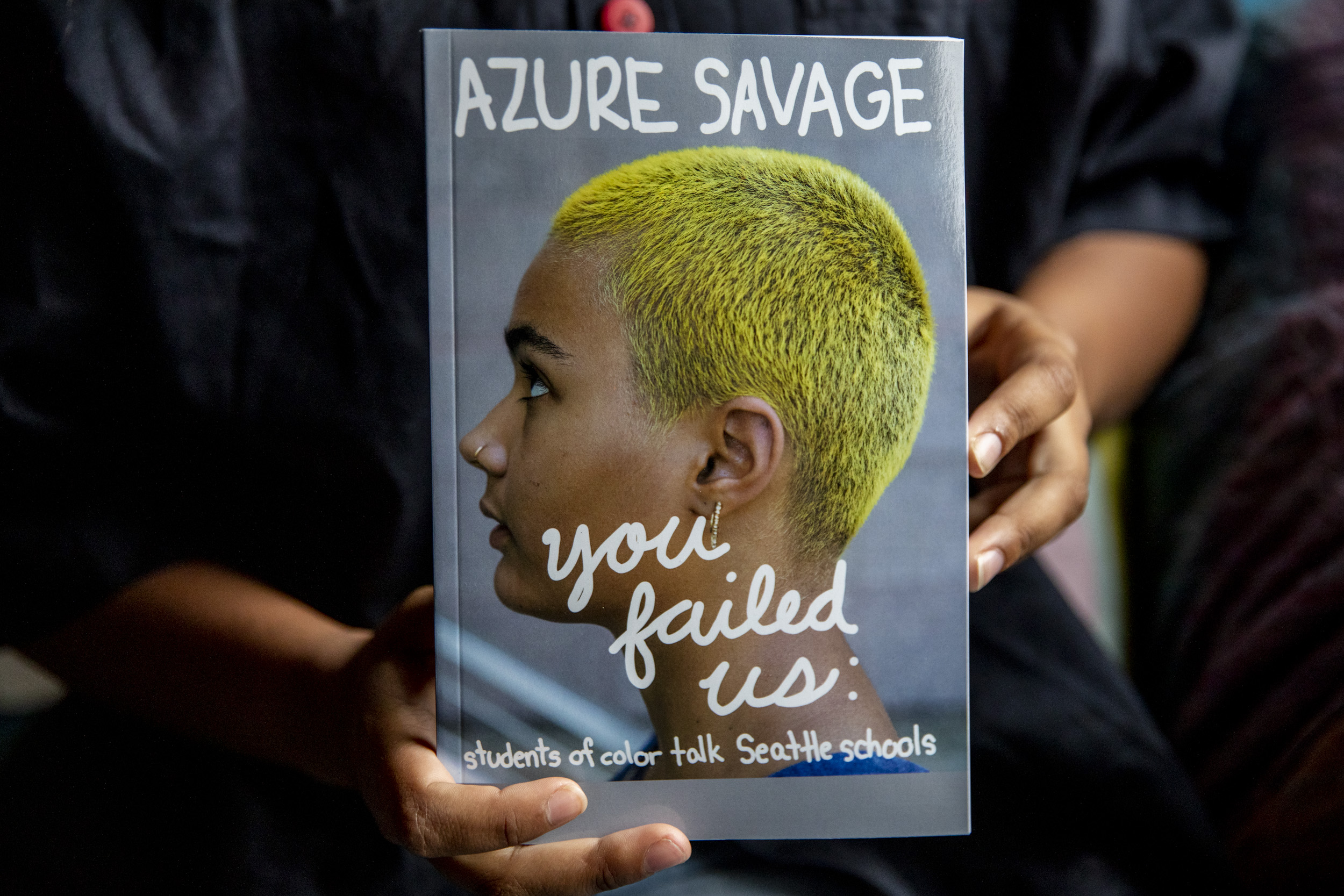 Azure Savage distributed 220 copies of You Failed Us within two weeks of releasing the book and currently has orders for around 250 more. (Photo by Dorothy Edwards/Crosscut)

Azure Savage distributed 220 copies of You Failed Us within two weeks of releasing the book and currently has orders for around 250 more. (Photo by Dorothy Edwards/Crosscut)

“The teachers would call me and say…, ‘I don't understand, why I can’t put [their] picture up,’ ” Owens said. “Well, it was an attempt on Azure's part not to stand out.”

That same anecdote appears in the introduction of You Failed Us, and speaks to a recurring theme in Savage’s book of students of color feeling isolated in majority white classrooms.

Later in the book, Savage points to a difficult choice facing underrepresented students in advanced learning tracks: remaining in classes where they feel culturally isolated but reap educational benefits, or being in general education classes where they are more likely to find community.

“It’s more than having someone to laugh with during class,” Savage writes. “It’s the advantage of having someone to ask for help on homework, to study for the test with, to stand up for you, to confront the racist teacher with.”

Savage told Crosscut that being part of the Highly Capable Cohort took a significant toll on their self-confidence.

Owens, who is white, added that the differences between her own experiences and how Savage navigates society as a person of color were apparent long before the teen was school-aged.

“I think it was especially hard for Azure because as a young person, they didn't really like a lot of attention,” Owens said. “Being biracial is a really odd experience because people constantly thought they could call out that [Savage was] different. And so Azure was very aware from a young age that people saw them as different from me and would comment on it.”

In addition to exploring issues surrounding race and gender identity, Savage offers readers a transparent look into their own struggles with depression, sexual assault, self-harm and disordered eating.

“One thing I struggled with a lot was how much of myself I wanted to include in it,” Savage said. “Because at first, I was like, ‘I don’t want this to be about me — this is about other students of color. But once I allowed myself to … write about my own experiences, that’s when I was able to, like, really create a story and narrative — make it more personal.”

Foundry10, a local education research nonprofit, helped Savage publish You Failed Us as part of a self-directed internship. Savage met mentor Michael Maine, a local photographer and creative consultant, through the program. While Savage had been working on the book for well over a year and knew the general direction they wanted to take it prior to starting the internship, Maine helped them, in part, to streamline the book and get it ready for publication.

“[Savage] wanted to put down on paper some of the things they actually went through and highlight some of the issues in the education system so they can be addressed systemically,” Maine said, adding that “Azure is a person who is very good at following through on things … and that's a pretty rare quality of a person their age.”

Savage decided to forgo the mainstream publishing industry, citing the historical marginalization of writers of color and genderqueer authors, and instead went the self-publishing route.

“I was just thinking, like, a lot of people would have an issue with what I'm saying in this book,” Savage said. “I have some very strong ideas that I don't want to have to change to allow it to be published.”

Publishing You Failed Us, Savage said, is a huge personal milestone. The book details many painful experiences that had previously gone unshared, including their internal struggle with embracing their genderqueer identity. The book's release marks the first time Savage has come out about their gender identity in a public way.

Savage, who identifies as transmasculine, has come out incrementally as such since they were in the eighth grade. They had told their peers back then that they were bisexual and, ultimately, that they didn’t feel like a girl.

“It went fine,” they said. “I wasn’t like dating anyone or sexually active so it didn't really mean anything.”

But it wasn’t until April of this year that Savage truly shed their feminine presentation and fully embraced their identity.

“I'm lucky to live in Seattle where it’s very widely accepted that there are people who are gay,” said Savage, who on the morning of Crosscut’s interview was sporting fashionably oversized, dark denim overalls, a lavender colored ascot and a buzz cut. “Coming out as trans was more difficult. It was a weird thing where I came out in eighth grade and kind of re-came out this year.”

As Savage returns to school this month, they anticipate challenges with explaining their new gender presentation to peers who aren’t already aware.

“If I don’t want people to see me as a woman, I have to tell them I'm trans,” they said, adding that they plan to eventually start hormone therapy and have top surgery. “I want to get to a point where I don't have to do that. It's exhausting.”

But notwithstanding their anxieties about the immediate future, Savage said that they look forward to distributing their book to other students — and even adults — in hopes that it resonates with them. While they aren’t charging a set price for the book at this time, they are asking people to make donations on a sliding scale.

Savage plans to host an official book launch at the Michael B. Maine Photography Studio at the Prudential Building in Pioneer Square on Sept. 20 from 7 to 10 p.m.