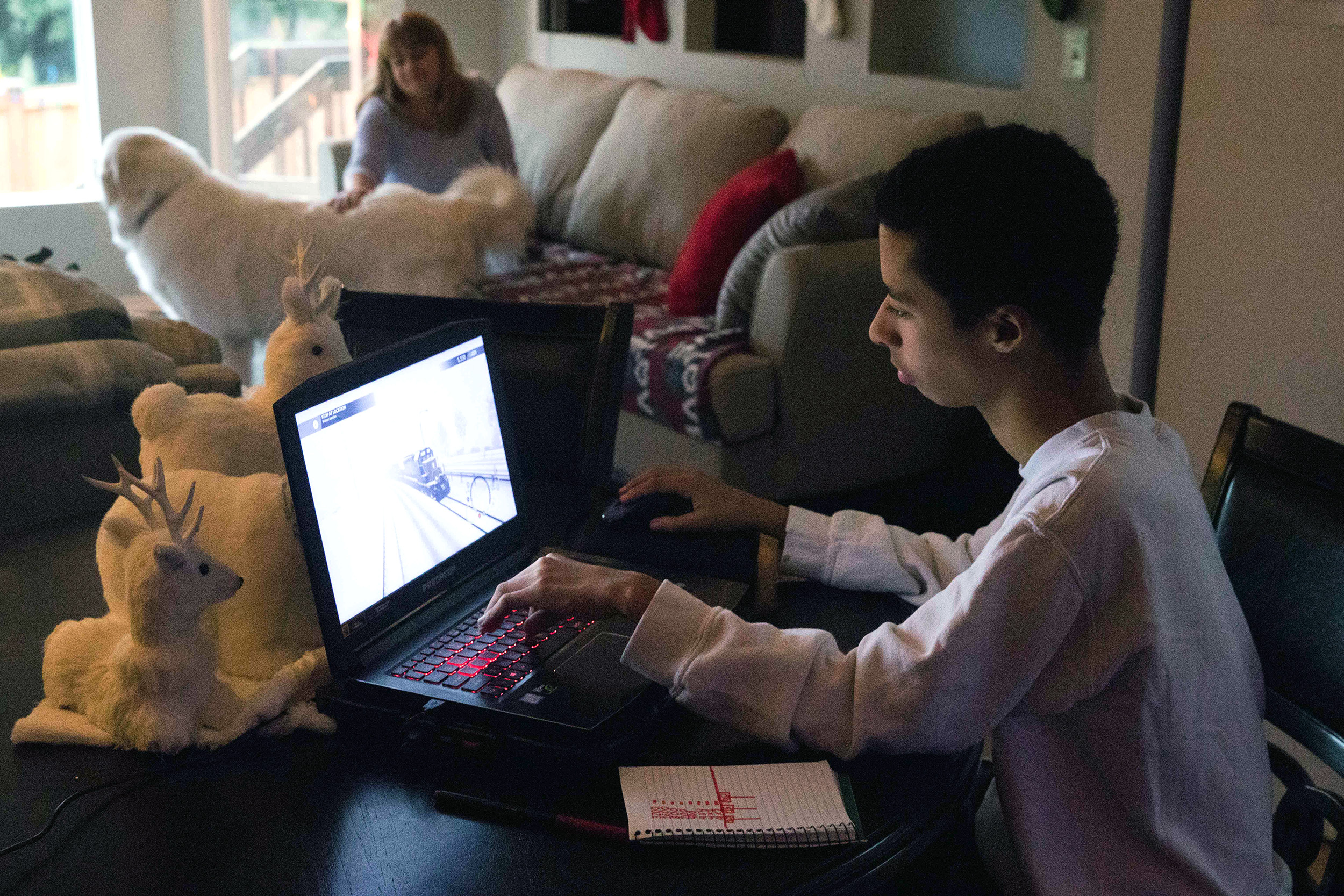 As Candace Ermels reviewed her son’s academic performance during his fourth year of high school, she realized something was amiss. Peyton’s comprehension of core subjects had regressed substantially over a short period of time.

Peyton, who is diagnosed with multiple brain processing disorders, has difficulty synthesizing language and understanding sequential events. Creating and receiving speech is challenging for him, and it's hard for him to grasp cause-and-effect relationships.

“In 18 months, his reading and writing and math levels went from fourth grade [and] third grade level down to kindergarten level,” Ermels said.

For her, the decline didn’t make sense. Peyton hadn’t experienced any major life events or injuries and had been attending school regularly.

She grew concerned that Shoreline Public Schools, through which Peyton, 19, has received special education services since he was 3 years old, wasn’t providing him an education that would position him to fulfill his career goals.

“Growing up, I constantly had [my kids] thinking about their futures,” said Ermels, who also has a daughter. “How do you ... take what you’re good at and what you’re interested in and make it a part of your future and your education?”

As Ermels described it, Peyton aspires to work at a school, using a computer and interfacing with people. However, she contends that the postsecondary track Shoreline has prescribed him doesn't honor this.

All students in Washington must have a personalized college and career readiness plan by the seventh or eighth grade, as part of state graduation requirements. For students with disabilities, the stakes are even higher when planning for the future. Without an appropriate education and training in life skills, students with disabilities might miss opportunities to live and work to their fullest capacity.

Ermels is among several parents who say Washington's transition programs aren't providing suitable academics and career training for students aging out of special education. They allege that this contravenes the federal right to an individualized education for students with disabilities.

Ermels now faces a court battle surrounding her decision to provide part-time home schooling to Peyton. Although Peyton is now an adult, Ermels is still his legal guardian. She said her choice is aimed at keeping him out of the Shoreline Public Schools’ community college-based transition program and on track to earn an academic diploma.

Last year, some of Ermels’ concerns about Peyton’s education were validated by the state.

In a complaint she submitted to the Office of Superintendent of Public Instruction (OSPI), she accused Shoreline Public Schools of shirking its obligation to implement measurable learning goals and monitor her son’s academic progress.

While the agency didn’t agree with that claim, investigators found that the school district violated special education law when officials waived certain graduation requirements for Peyton without Ermels' knowledge or consent. Investigators also determined that improper adjustments to Peyton’s grades and a series of early dismissals from class amounted to a failure to implement his individualized education plan, better known as an IEP.

The Individuals with Disabilities Education Act, which guides federal special education policy, guarantees qualifying students a “free and appropriate education,” including personalized classroom instruction. Moreover, a landmark U.S. Supreme Court decision handed down in 2017 affirmed that students with disabilities are entitled to more than a minimally beneficial public school education.

“They purposely withheld education,” Ermels said, claiming that the district treated her son as though he had plateaued.

But now, officials at Shoreline Public Schools have lodged their own complaint with OSPI against Ermels. The district filed a due process complaint against her after she refused to consent to a second evaluation of Peyton for transition services.

Ermels argued that Shoreline already collected the data necessary for an individualized transition plan for Peyton. She also maintained that the evaluation would create undue distress for her son — who struggles to conceptualize the future beyond a few weeks — and that the request was retaliatory.

As a result of his part-time enrollment status, Peyton is unable to access individualized academic instruction —  a fundamental component of special education. On Nov. 13, Ermels filed an appeal of Shoreline’s complaint in King County Superior Court. asking a judge to order that her son’s access to special education classes be reinstated without a new evaluation.

However, district spokesperson Curtis Campbell said in an email statement to Crosscut that "every student’s IEP is developed and reviewed at least once every year by a team that includes teachers, other school staff, the student ...  and the student’s parents" and that "the outcome of that process is an education program and placement that is individually determined to meet the student’s individualized needs."

Ermels said she was unaware of the significance of her son’s transition plan at the time it was created.

“I didn’t know the importance of this [plan] until I got an attorney my son’s senior year,” Ermels said. “That's primarily where parents are unwittingly denying their kids an education because they don't know the severity of that [document].”

Campbell said a required "annual review of a student’s IEP can, and often does, result in changes to a student’s transition plan as the student’s strengths, preferences and needs develop and change."

District officials previously assured Ermels that various postsecondary pathways would be open to Peyton when the time came, she said, but that hasn’t been his experience. She worries that entering the district’s job skills-focused transition program — one of multiple pathways for special education students who’ve completed four years of high school without graduating — would effectively halt his academic coursework.

“I just want Peyton to be educated so that he can get a job he wants and live a life better than what the district is educating for,” she said. "They're only focusing on what he can't do and not what he can do."

During the 2016-17 year, about 21% of former special education students in Washington pursued higher education, while 35% obtained competitive employment.

Outcomes for students transitioning out of special education depend on many variables, said Kris Hirschmann, director of transition services at Seattle University’s Center for Change in Transition Services. That said, though, there are clear predictors of success for all students with disabilities.

“One of them is work-based learning, one of them is job experience,” she said, adding that academic goals and the amount of time spent in mainstream classrooms are also key factors in postsecondary outcomes.

Beyond the school system, the connection families maintain with agencies that provide disability services to eligible young adults is crucial.

“One of the big [outcome] predictors is family support,” Hirschmann said, “and the family understanding the differences in how agencies provide services.”

Throughout most of his high school career, Peyton has taken a combination of core subjects, life skills classes and elective courses. Documents show that Ermels has advocated strongly for Peyton’s transition experience to include both high school academics and computer software courses through Shoreline Community College, at her expense. But Shoreline Public Schools declined to adopt her proposal as part of Peyton's transition services.

Ermels isn’t the only parent to voice concerns about the district’s transition program.

"It's like glorified day care,” said Kathy Lynn, whose daughter, Casey, spent two years in the program. “It's not getting them where they need to go."

Casey, who has autism and a number of chronic health conditions that affect her physically, now works as an office assistant in downtown Seattle. But that’s no thanks to the job training the transition program offered, Lynn asserted.

“Instead of letting [transition students] continue their education towards jobs that they're actually interested in that would be like their peers are getting, they're basically railroaded into jobs that have very little expectation,” she said. “You know, sorting clothes at a thrift store to look for stains and rips.

“It could be a fine job if that's what your kid is interested in,” Lynn added. “But if their vision isn't good or their physical capabilities aren't very good, they still spend a whole semester being told that that's their job.”

District officials disagreed with this characterization, asserting that "each student’s preferences, interests, needs and strengths continually inform the selection of semester-long internships and the specific job tasks within each workplace."

For Lynn, underfunding — an issue that commonly limits the quality of special education services that school districts can realistically provide — doesn’t seem to apply here.

“They get the same amount of money whether they stick [a student] in a job that has nothing to do with what they can do later or whether it actually teaches them a skill,” she said.

Parents in other school districts have similar concerns. In Vancouver, Kathy Sheppard said she’s mapping out her 11-year-old daughter’s transition early so that, when she gets an official transition plan at age 14, it matches her capabilities and interests.

“Right now, academics are not meaningful,” she said. “In the [transition] meeting, I don’t want to set goals for my daughter to be making copies. … So I’m going to make sure her transition program is academic-based.”

For her part, Ermels said she’ll continue her fight with Shoreline Public Schools until Peyton has access to an appropriate academic education.

But it’s not just about her son, she said. Her goal, in part, is to set a precedent that can help other families successfully navigate the special education transition.

“Just because a student has disabilities does not discount their abilities to learn or their desire to learn,” she said. “And if a student still has the desire and ability to learn, it’s the school system’s … mandate to educate children to their fullest potential.” 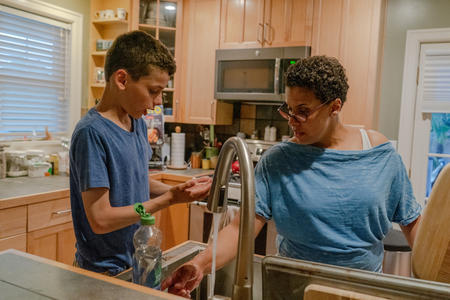 They contend that what should be avenues of recourse for families and accountability for staff often lead nowhere.

by / October 24
Article continues below

They contend that what should be avenues of recourse for families and accountability for staff often lead nowhere.