The King County Council committed nearly $400,000 to better understand how discharges from its three largest plants affect juvenile salmon and the southern resident orcas that feed on them. 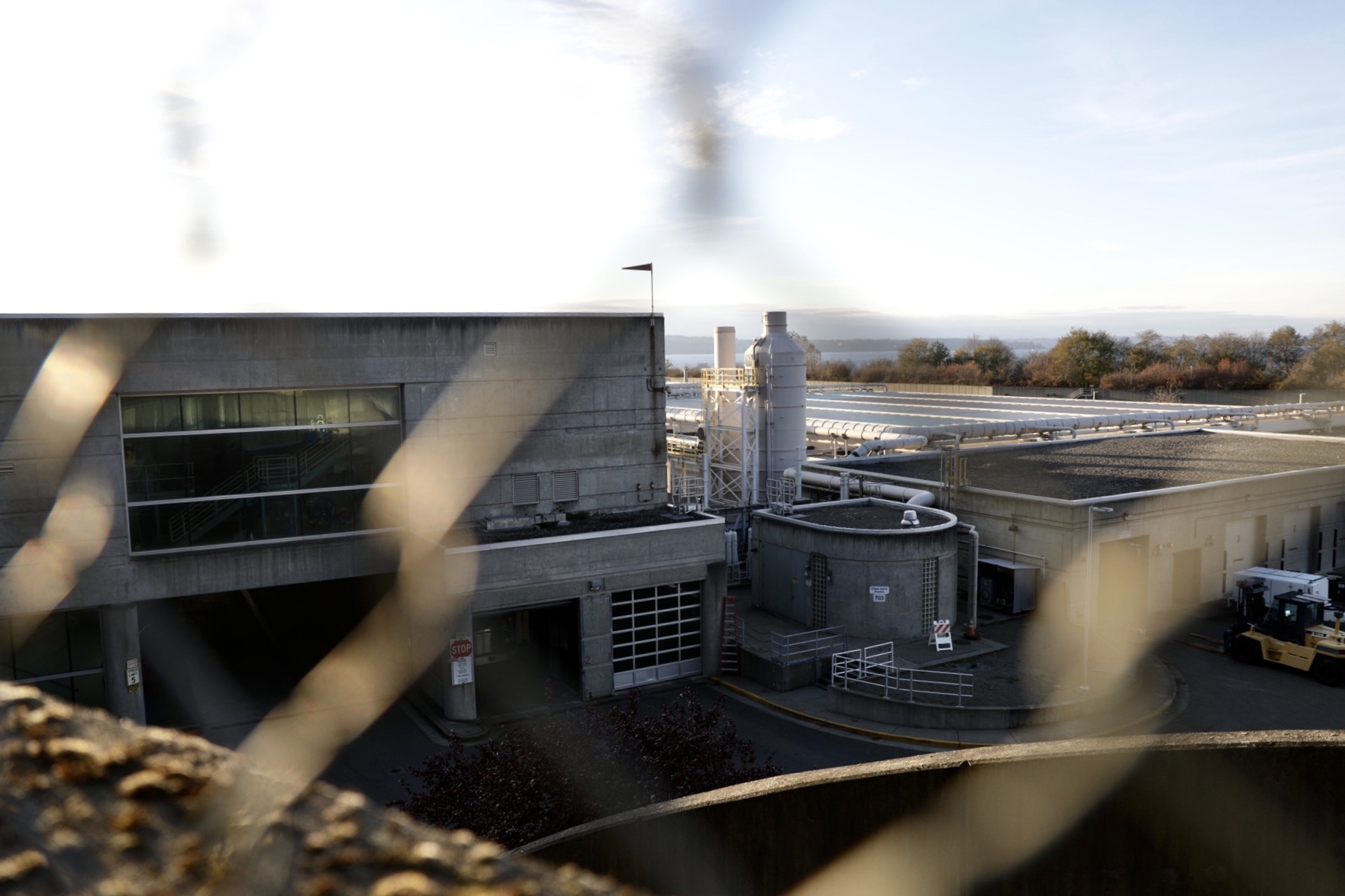 In 2016, the international media erupted with reports of “salmon on Prozac” found near two wastewater treatment plants in Bremerton and Tacoma. A research team led by Dr. Jim Meador, a research fish biologist with the National Oceanic and Atmospheric Administration's Northwest Fisheries Science Center, discovered concentrations of common medications, chemicals such as fungicides and even cocaine in wastewater effluent, local estuaries and the tissue of nearby juvenile salmon. Even fish in the Nisqually estuary — more than 20 miles from the nearest test treatment plants — showed signs of contamination.

The study estimated that, each year, all 106 Puget Sound treatment plants could be collectively discharging 97,000 pounds of chemicals into the Sound. Over the past few decades, there has been considerable growth in not only the number of possible contaminants in our waters, but also the human population responsible for pollution. Public concern has risen to match.

Now, a new study funded by King County and spearheaded by Meador aims to go beyond the sensational “salmon on cocaine” headlines to get us closer to understanding what this means for the life cycles of salmon and orcas that eat them. It has become a frequent topic of discussion within state government — especially after the Governor’s Orca Task Force made reducing exposure to pollution a top priority.

The research will focus on King County, home to the largest wastewater treatment system in the state. The King County Council invited Meador to speak last September, and Councilmember Jeanne Kohl-Welles pushed for this new orca-focused contamination research.

“While there have been some studies suggesting sewage treatment facilities might be contributing to a reduction in juvenile salmon in our waters, there are significant unknowns as to why that is,” Kohl-Welles wrote in a Crosscut op-ed from December 2018, soon after successfully including $400,000 in funding for research in the county budget.

That project is finally ready to launch. Over the next year, researchers will explore how effluent from King County’s three largest plants and nearby waters affect orca prey species and orca exposure. Meador will work in tandem with Dr. Jen McIntyre, a stormwater expert and Washington State University researcher; her graduate student Suz Ball; and Dr. Andy James of the Center for Urban Waters at the University of Washington Tacoma.

“A lot of people are very concerned about the health of Puget Sound, so we're just kind of shining a light on some of these things that people aren't thinking about,” Meador says. “Everyone knows stormwater is important and there's a lot of press, and a huge amount of effort for rain gardens and not dumping stuff down the drain or letting your car drip oil and all these different things. So this is another aspect of a conduit, basically, into Puget Sound of chemicals.”

The study will better define just how much these wastewater treatment plants and stormwater serve as conduits for many chemicals into the environment.

“We always welcome bringing in more experts,” says Christie True, who manages King County’s wastewater treatment plants as director of the King County Department of Natural Resources and Parks. “It’s really important to have outside eyes on it for sure.”

Meador and his colleagues’ research will be similar to the 2016 study that focused on Tacoma and Bremerton, but with some unique twists. This study, Meador says, adds crucial King County data points to the conversation.

“We haven't done any [of this work] in King County, really. So it'll build on our database,” Meador says. “A lot of it at this point is just chemistry.”

The researchers will collect effluent from the West Point, Brightwater and South plants and water from nearby drainage outfalls, then send it to a lab to get a breakdown of the compounds in it. In the spring, they’ll expose juvenile chinook salmon from a hatchery to effluent mixtures at McIntyre’s Puyallup laboratory.

Beyond measuring bioconcentration of chemicals and evaluating for impacts both acute (death) and chronic (limited growth and reproduction), they’ll be studying biomarkers in the blood and liver that can show subtle negative health impacts, including metabolic, endocrine or behavioral disruption.

Just exposing juvenile salmon to potential discharge contamination is “very rare,” says Will Hobbs, an environmental scientist within the toxic studies unit at the Washington state Department of Ecology, and not done as part of whole-effluent testing that dischargers go through to get repermitted. "Typically that's not done."

The team will need Washington state permits for transporting salmon from a hatchery to the Puyallup lab, but Meador says this is a "minor issue" for the study.

"We just need to ensure those fish do not enter any natural waters," he says. "It's a bit early at this point since we don't need the permit until May, and it only takes a few weeks for the review process. The main issue is notifying the hatchery manager so they know we would like several hundred fish for our work. They are always accommodating. We have been doing this for a few decades and have never had an issue with getting such a transfer permit."

The researchers will also be looking at stormwater’s contribution to the overall contamination of wastewater effluent, as stormwater frequently winds up in wastewater during heavy rain.

“We'll do sampling with high flow and low flow to see what the contribution is from stormwater to this whole mass of compounds coming out,” Meador says.

The team will look for contaminants of emerging concern — like pharmaceuticals and personal care products — as well as enduring industrial chemicals, like PCBs. Certain concentrations of some pharmaceuticals and personal care products can make it harder for fish to grow and reproduce, which may harm orcas by reducing overall salmon numbers and nutrition quality.

However, chemicals like PCBs can pass to orcas themselves. Where fish can metabolize many pharmaceuticals in their liver and effectively get rid of them over time (if they survive), PCBs accumulate in animal tissue indefinitely and concentrate as they move up the food chain. Orcas retain toxic substances in their blubber to such a degree that they boast some of the highest contamination levels of all marine mammals.

The study may help researchers predict how much contamination winds up in orcas as a result of eating salmon.

“Would [salmon chemical contamination] possibly affect orcas? I mean it's kind of removed another level so there will be nothing definitive on that, but we can make some predictions, maybe on bioaccumulation or something,” Meador says.

Doing controlled effluent exposure tests will produce important data points, says Jim West, a senior research scientist at the Washington Department of Fish and Wildlife who is in charge of monitoring toxics in organisms throughout Puget Sound. West sometimes consults Meador to understand the significance of bioconcentration values he finds in local aquatic life.

“[This] study offers an alternative to a more ‘classic’ or simpler toxicology approach where fish or other organisms are typically exposed to one chemical at a time in controlled lab studies,” West says.

“We tend to single out chemicals that we know are impacting some of these organisms,” the Department of Ecology's Hobbs confirms. “This [is the] kind of study where you’re looking at the whole sort of mixture, to give you an idea of what the response of the organism would be [to effluent].”

The scope of chemicals monitored in this study is also noteworthy. Meador says that even though it's expensive and difficult to do, they’ll attempt to identify hundreds of compounds, looking especially for newer chemicals and those that occur in low concentrations.

“I think it would — depending on the chemical analyses that are in it — likely add additional information on a suite of chemicals that we don't have a lot of information about,” says Cheryl Niemi, a longtime Department of Ecology specialist in surface water quality.

Attempting to evaluate all of the chemicals in a water sample is difficult by itself, and figuring out which ones are creating problems — alone or together — is not likely within the scope of the study. Meador says that while his team plans to whittle down the list of possibly important chemicals, the effort can get “pretty tricky.”

But the need for that data is substantial — especially for counties attempting to budget for water treatment programs. Stormwater runoff is largely believed to be the most significant pathway to the ocean for key contaminants, and a recent Department of Ecology report suggests wastewater may be a more significant vehicle for pharmaceuticals and personal care products.

“You want to figure out how much contamination organisms can tolerate, because it's super expensive to get rid of [contaminants],” West says. “When do we say, we're done cleaning up, or we're done controlling the sources of these contaminants? You don't want to be spending billions of dollars controlling chemicals that are already low enough to not be bothersome.”

But eliminating the ever-increasing number of potent chemicals that could adversely affect salmon, orcas and other marine wildlife requires efforts that start well before they reach the treatment plants. Niemi notes that “sewage treatment plants aren't designed to remove this huge onslaught of new chemicals” that people flush down toilets or that run off roadways. But a significant step toward developing upstream solutions will be to connect the chemicals to impacts in the first place.

“There are thousands and thousands of chemicals out there in commerce, and we are responsive to ones that cause problems in general. If we could get ahead of that … and be more predictive in our approach, then I think that would be really great for us,” Niemi says.

Update: Crosscut updates this article at 2:07p.m. on Nov.7, 2019, to clarify the type of permits needed for the study.